There were no state playoffs to aspire to in this truncated, COVID-19 impacted spring football season. The highest honor the member teams of the Greater Spokane League could achieve is East Region champion.

Whereas the other league sports competed in “culminating events” to determine a champion, football organizers decided to play a seven-game regular season with no postseason.

Gonzaga Prep and Central Valley entered play on Friday with one loss combined, with Mt. Spokane (5-1) right there too, having concluded its season with a 34-9 win over Lewis and Clark on Thursday.

A first-half defensive battle opened up considerably in the second half and it turned into a battle of attrition between two unrelenting offenses.

In the end, the G-Prep rushing attack had it just a little bit better than the CV air raid.

Robert Collier Jr. rushed 13 times for 149 yards, Ryan McKenna added 101 yards on 21 carries with a pair of touchdowns and the Bullpups topped the Bears 41-26 to finish the season undefeated and earn the commemorative “East Region Champs” T-shirts when the final whistle ended the nearly three-hour contest.

“Two very good football teams,” G-Prep coach Dave McKenna said. “You know, at the end of the day we came out on top.”

Collier is often the third option of the three juniors in the Bullpups’ backfield.

“Not tonight,” Collier said. “You know I had to show out with all my opportunities that I got tonight”

Collier made most of his yards as the pitch option, attacking CV’s edges.

“It was just what they were giving us,” he said.

“Carrying the ball, he was unbelievable,” Dave McKenna said. “But you know, people don’t see what he does blocking – what our guys do for each other. So, you know, it’s not just one guy. It’s collectively all 11 on the field.”

There were just two touchdowns scored in the first half as the defenses looked stout.

After forcing a CV punt early, G-Prep (5-0) used heavy doses of Jaden Ortega to soften up the Bears’ defense, then Christian Hilburn took a pitch sweep 30 yards to the CV 4. On third-and-goal Ortega pounded it in from 1 yard out for an early 7-0 lead. 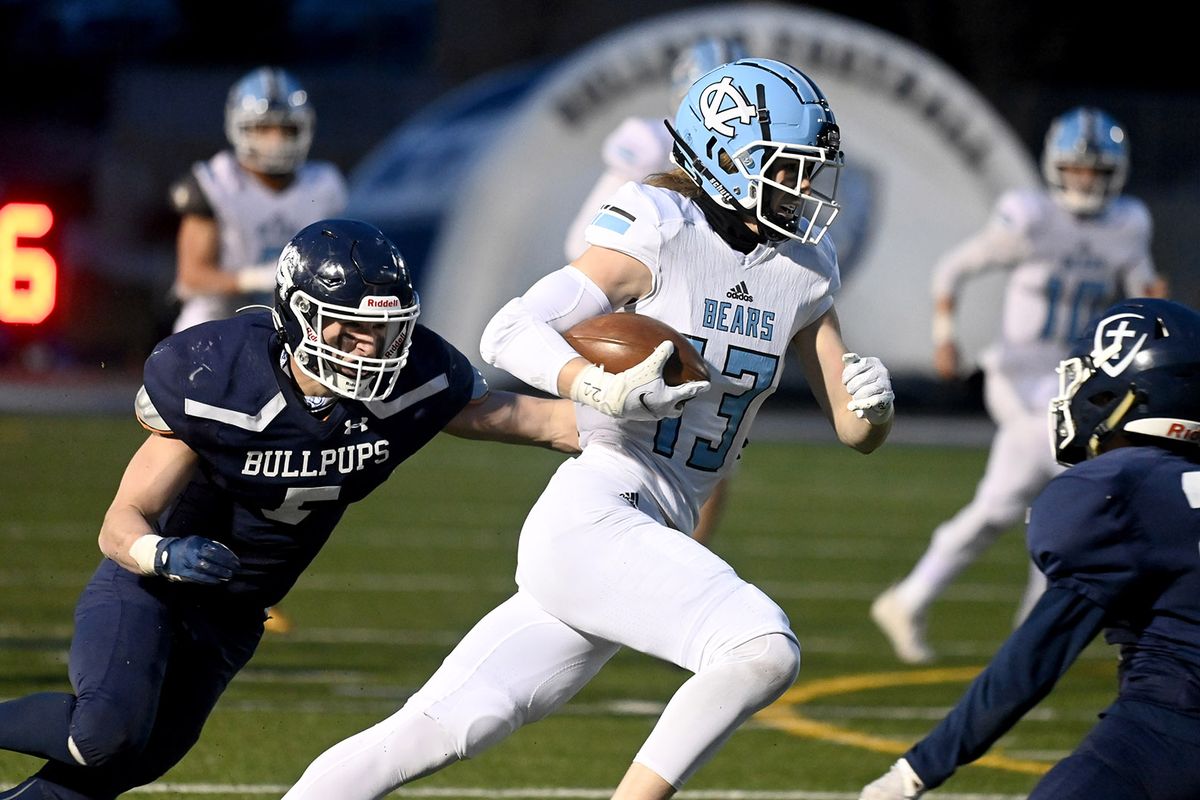 CV (5-2) answered right back. GSL leading passer Luke Abshire hit Josh Lawson on a short out route and he took it down the sideline for a 51-yard TD. The extra point was blocked and CV trailed 7-6.

G-Prep got a long kickoff return by Daniel McKiernan to the CV 43. The Bullpups moved it inside the Bears’ 10, but the drive stalled and Evan Duchesne drilled a 25-yard field goal for a 10-6 lead.

The Bullpups had a chance to add to the lead late in the second quarter, with first-and-goal at the 9 with just over a minute left, but a pitch left intended for Hilburn ended up on the turf and CV’s Riley Phillips covered it.

Coming out of halftime G-Prep ran a reverse to Duchesne, who took it 50 yards to the CV 8. Two plays later, McKenna connected with Hilburn on a 9-yard touchdown pass and 17-6 lead.

On its next possession, CV was called for holding and was forced to punt from its 2. A short punt set G-Prep up at the Bears’ 24, but another fumble by the Bullpups gave the ball right back.

G-Prep forced a punt and a seven-play drive set up a 36-yard field goal by Duchesne and a 20-6 lead with 4:38 left in the quarter.

A block in the back on the kickoff put CV at its 12. The Bears went on an 11-play, 88-yard drive, culminated by Terrance Kelley’s 3-yard TD run. A muffed extra point left thee Bears within one score at 20-12.

McKenna found Hilburn in the middle of the field and the speedy wideout took it 61 yards to the CV 3, where Ortega plowed into the end zone for a 27-12 lead with 29.5 seconds remaining in the third.

Abshire connected with Brandon Bruegeman for 39 yards to the G-Prep 15. On the next play, Abshire found Bruegeman across the middle for a TD to make it a one-score game again with just under 10 minutes to go.

After a short kickoff, McKenna went around the left end for 51 yards for a touchdown and G-Prep led 34-19, but CV bounced right back with a 69-yard TD pass from Abshire to Lawson.

“(CV) is explosive,” Dave McKenna said. “They’ve got some very good athletes and made some big plays.”

CV got the ball back twice in the late stages, but the G-Prep defense held.

“We picked it up in the second half (on offense),” Ryan McKenna said.

“But our defense held out and played great.”