Dense storm clouds rolled into Colville around 10:30 a.m. Saturday, an hour and a half before 18-year-old Dale Martin was scheduled to be taken off life support.

The clouds brought hail with winds strong enough to sweep the icy stones across the road in waves.

An hour later, the hailstorm had ended but the chill had not. About 150 people stood in silence in the parking lot of Mount Carmel Hospital, eyes fixed to the entrance.

Martin, who suffered a severe brain injury during an April 1 Colville High School football game, received a ceremonial “hero walk” to the surgical area. He died at noon and became an organ donor.

After a half-hour of utter silence, sobs broke out as the first wave of family and friends emerged from the hospital.

“He was a servant,” said Daniel Goble, a youth pastor and close family friend to the Martins, as he stood in the dazed crowd outside the hospital. “You just don’t see kids like that. The legacy that he leaves behind is more than most people who have a whole lifetime.”

Classmates said they knew Martin as a jokester since childhood. In high school, he was a popular kid who walked through the halls of Colville High high-fiving everybody he passed.

“He was always the underdog and he never said no. If somebody told him no, it fueled him,” said Michael Martin, Dale’s older brother by three years. “He was the little brother and he always wanted to be bigger.”

Dale Martin was a defensive end and running back for the Colville Indians. Just before 9 p.m. during a game April 1, students say he was hit hard, fell down, stood up and said he didn’t feel good. Then he fell again. An ambulance wasn’t on scene but arrived in about 5 minutes, wrote Taylor Newquist, an editor for the Colville Statesman-Examiner, in a tweet sent from the game.

With their teammate loaded into the ambulance on a stretcher, Colville football players had 3 minutes to warm up before returning to the game, Newquist wrote.

About a dozen high school or college football players in the U.S. die each year while playing or as a result of an injury on the field, according to a 2013 study published in The American Journal of Sports Medicine. Among student football players who died between 1990 and 2010, brain injury was the second-most common cause of death after cardiac failure.

For Colville High, the day after Martin’s injury on the field was unbearable, senior Jarette Bateman said. She estimated half of her class was absent.

“It felt so empty and so dark,” Bateman said.

Shortly after, students arranged to meet one evening on the football field in pajamas to share stories about Martin. A group of about 100 students showed up.

Bateman laughed remembering an account that Martin accidentally backed into a barn with his driver’s side door open, tearing the door clean off his pickup truck. Friends remembered Martin smiling as if it were nothing, throwing the door into the bed of his truck and returning to the driver’s seat ready to roll.

To Goble, Martin’s death is unfathomable. He said the brothers have never had an easy path. It was only two years ago they lost their uncle who was “Dad” to them.

Michael Martin spent the past four years in the Marine Corps, which he joined straight out of high school. He said he missed too much of his brother’s high school years.

“The word ‘faith,’ it‘s easy to say many times,” Goble said. “It’s so hard to feel in this moment. But I can’t stand on anything else. Everything else is broken.”

Goble said the Colville community has been a blessing through the week. Community members have donated to a fund set up in the name of Martin’s mother, Monica Martin, at Banner Bank.

While hail was still pelting the pavilion in Yep Kanum Park, a forested 20-acre stretch at the heart of Colville, friends of Martin and mothers of his teammates continued their work setting up tables of T-shirts and raffle prizes to be sold after the hero walk.

Students and parents also set up jars for donations in nine businesses around town, Bateman said.

Julie Pierce, whose son is a sophomore on the football team, estimates between raffle tickets, shirts and the donation jars, community members had raised more than $10,000 as of Saturday morning.

Pierce only knew of Martin, but she cries thinking about his decision to donate his organs.

“When something hits this close to home, every one of us puts ourselves in their shoes. But for the grace of God go I,” Pierce said.

“The family, I hope, knows they have the love of the entire community.”

Goble said he’s only starting to see all of the effort the community has put in behind the scenes. He doesn’t know what comes next.

“Prayers would help,” Goble said. “People can do that anywhere.” 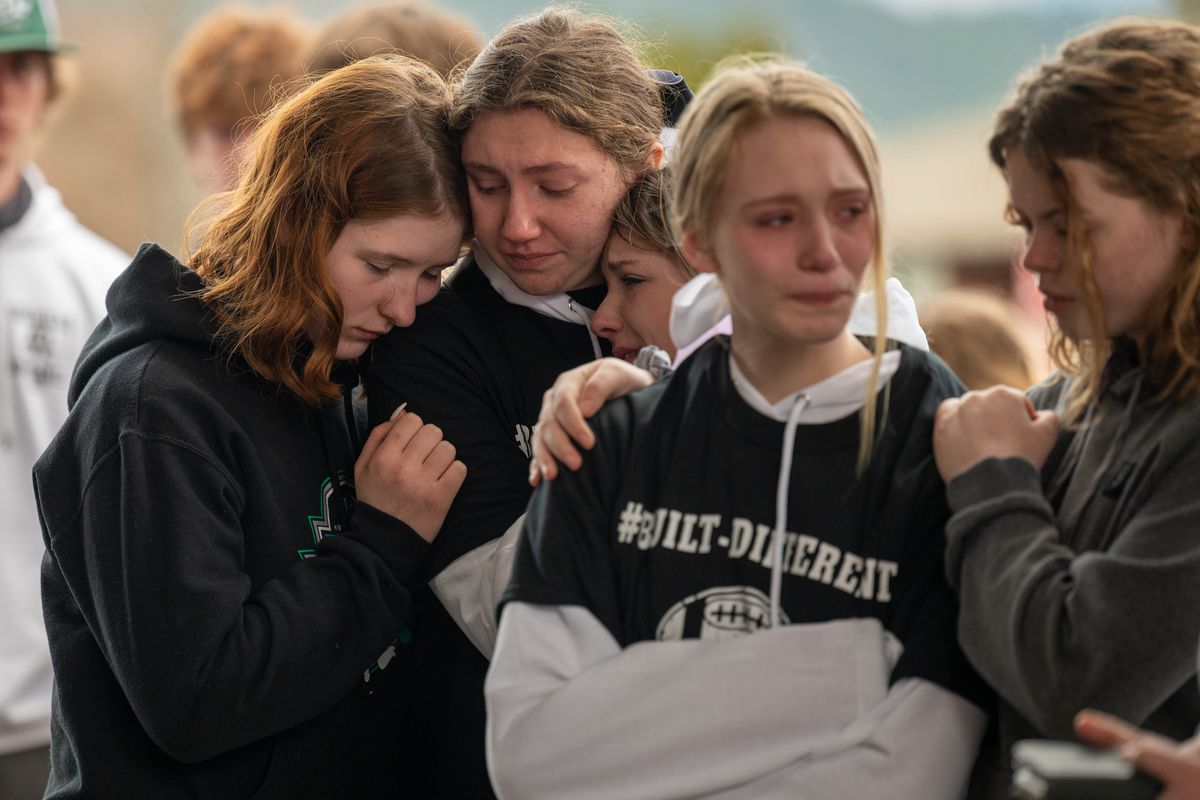 Colville High School students, and members of the community gather Saturday outside of Providence Mount Carmel Hospital to grieve the loss of Dale Martin who was being taken off life support and having his organs donated after he suffered a traumatic football injury during a game, April 1, 2021. (COLIN MULVANY/THE SPOKESMAN-REVIEW)