Time and place are often an afterthought at tipoff, even in the oddest of circumstances.

But before North Idaho College clipped Community Colleges of Spokane 83-75 on Tuesday in Coeur d’Alene, NIC head coach Corey Symons was cognizant of the difference.

His players – as an assembly of long, athletic bodies from Spokane to Montana and New York – also felt the strangeness of their coronavirus-altered schedule.

A week after the conclusion of the NCAA Tournament in Indianapolis, the Cardinals and Sasquatch were in the beginnings of their respective junior college seasons in front of roughly 500 mask-wearing fans at NIC’s Rolly Williams Court.

College basketball fervor had taken its annual, post-March Madness dive, but NIC (2-0) and CCS (0-2) found themselves in the midst of taut, back-and-forth rivalry game.

“It’s really weird,” said Symons, whose Cardinals won their 53rd consecutive Northwest Athletic Conference game. “I said in my pregame speech, ‘Guys, nobody else is really playing,’ and really, it’s been hard on the guys with all the rule changes, the differences in recruiting, and now finally playing.

“There’s part of you that thinks, ‘What are you even doing playing now?’ but it’s also great for the kids because they’ve been working hard and need to play some games.”

The NWAC, composed of more than 30 teams in Washington, Oregon and Idaho split into four regions, isn’t offering a postseason. Several teams have already opted out.

Jackson, a 6-foot-7 Boise native, came to NIC last year in an effort to boost his stock for potentially bigger Division I offers.

Considering the up-and-down season in which NIC wasn’t sure it would play a single game in the 2020-2021 academic year, Jackson is thankful for the opportunity.

“It was about being prepared and staying prepared,” said Jackson, who had 16 points in Tuesday’s win. “It definitely feels different starting later, because everything is done. It’s not that regular flow.”

“It’s a once-in-a-lifetime feeling for all of us. Better late than never,” Groth said. “Very thankful for the opportunity to play, having this journey.”

Since the pandemic allowed all players at all divisions – NCAA, NAIA, NJCAA, NWAC and others – to have 2020-2021 not count against their eligibility, it muddied the waters for next year’s rosters.

The NCAA is also allowing players to leave their respective schools, enter the transfer portal and become immediately eligible next season, which has caused more than 1,000 four-year players to jump ship from their former teams in search of another.

With recruiters having ample options for players with four-year experience in the transfer portal, many worthy junior college products aren’t getting the attention they would in a usual year.

Many will return to junior college and take advantage of the extra time, including this spring season.

It’s been a frustrating few months for the East Region rivals.

Each school has had to adhere to local and NWAC protocols. CCS, which has had its roster on campus since September, hadn’t played true 5-on-5 basketball as a team until last month.

Each team must do coronavirus testing twice a week, including twice on game day, Groth said. Teams must also wear masks during practice, though only players and staff on the bench wore them on Tuesday in Coeur d’Alene, which has looser local restrictions than Spokane. 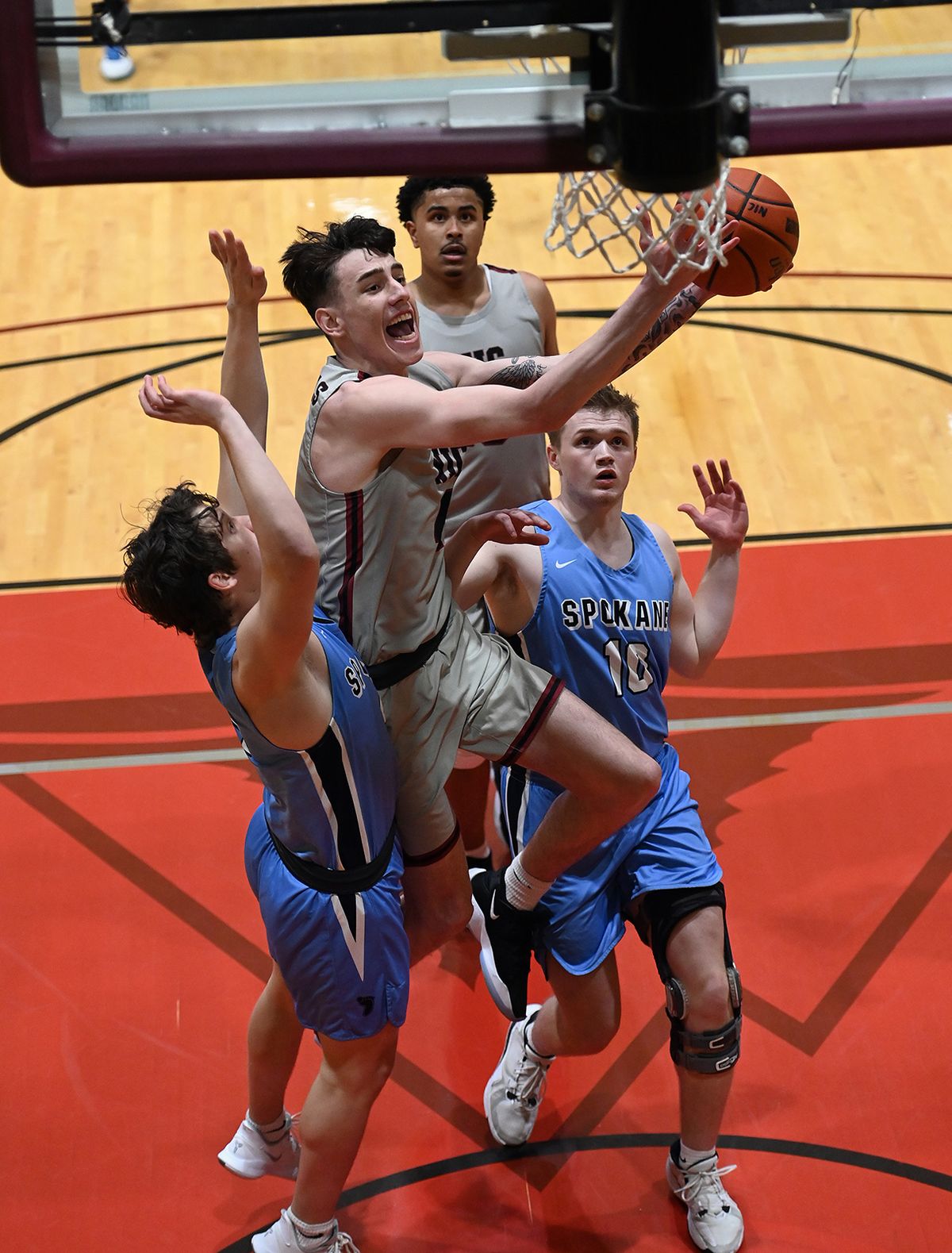 NIC’s roster took some hits when players began to see the writing on the wall and left the team at the semester break. Some went to the NJCAA level, joining junior college teams that began in January and are in the midst of their national tournament in Hutchinson, Kansas.

“Three weeks ago, if I was a betting man, I would have told you we weren’t going to play any games in the 2020-2021 school year,” Symons said. “And the guys felt the same. But it’s good for the morale that we’re out there.”

Symons’ squad – a team that annually sends multiple players to the NCAA Division I level – boasts more Spokane talent than usual this season.

Central Valley graduate Noah Sanders had 15 points off the bench for the Sasquatch and Shadle Park graduate and returning starter Kobe Reese had six points inside.

The Sasquatch, composed mostly of sophomores, and the Cardinals may return several players from their current roster in 2021-2021.

“Right now, we just want to focus on what’s right front of me with this season,” said Jackson, who has yielded multiple Division I offers. “And that’s North Idaho College and my teammates.”