Due to a delay in construction at Steptoe Butte that will eventually cause a three- to four-month closure, the summit tucked in a patchwork of green and brown rolling hills is still open to the public.

The sunbathed park with a 3,600-foot summit drew nearly 16,000 visitors in May 2019, according to the Washington State Parks visitation reports. After an unprecedented dip in visitors in April 2020 during the early days of the pandemic, still nearly 9,000 visited Steptoe Butte in May 2020. 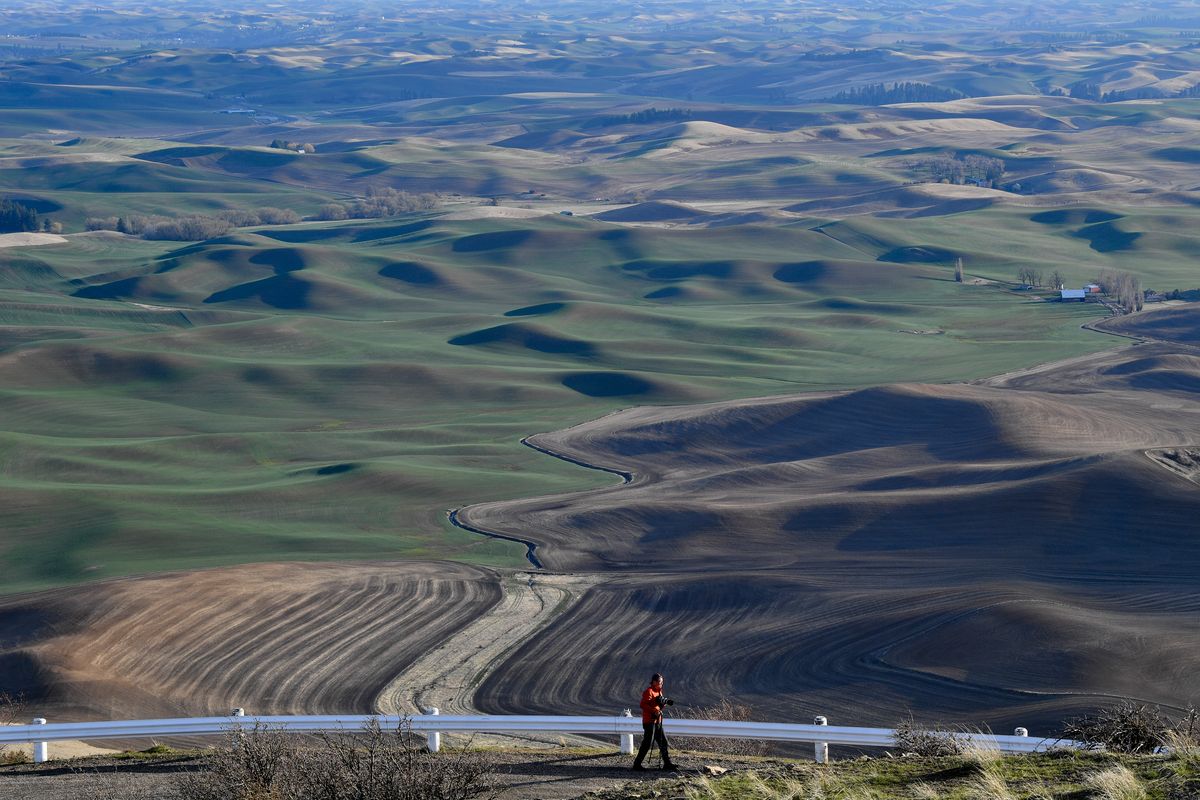 Photographer John Zheng walks near the summit of Steptoe Butte as he looks to frame up his next shot on Thursday, April 15, 2021, near Steptoe, Wash. (Tyler Tjomsland/The Spokesman-Review)

Toni Droscher, a spokesperson for Washington State Parks, said construction planned for early 2021 has been delayed, and the state hasn’t decided on a new start date.

The park’s road surface, which stretches more than four miles, is over 50 years old, Droscher said. It’s been patched in many places over the years, leaving the pavement “beyond its useful life,” Droscher said.

Both parking lots at the summit are currently too small to allow oversized vehicles or vehicle-trailer combos to turn around. Many damaged culverts need repairs or replacement to foster proper drainage, which will also address water quality issues Whitman County identified, Droscher said.

Washington State Parks has a long list of improvements to make at Steptoe, Droscher said, including rehabilitating the park’s roads and parking lots, adding a turnaround for safety and traffic flow, new traffic signs and changes to address accessibility and pedestrian safety at each parking lot.

Droscher said rangers and other field staff have anecdotally reported more visitors who are new to the outdoors during the pandemic, and parks overall have seen an increase in visitation since the start of the pandemic.

Among the state’s parks, Steptoe Butte is special, Droscher said.

“You get a 360-degree view of the landscape below,” she said.

Entering the park, visitors travel through a historic apple orchard. The butte itself is a rare geological formation of some of the oldest quartzite rock in the Pacific Northwest, Droscher said.

“It’s a special place,” Droscher said. “And the drive from Spokane is really lovely.”Maggie Quinlan can be reached at (509) 459-5135 or at maggieq@spokesman.com.