The young chocolate Lab had no collar, no microchip and no owner calling in to find him when Spokane County Regional Animal Protective Services officers lifted him from the side of the road.

He couldn’t stand. A good Samaritan had called about a dog lying on the side of the road and Beth O’Keefe, a veterinarian at SCRAPS, suspects he’d been in that condition a long time. He was over the shocking pain his injuries would’ve caused. He didn’t whine or scream, even when she touched his broken legs.

“He was just a sweetheart from the beginning, like ‘Ouch, that hurts but I’m just gonna lick you,’ ” O’Keefe said. “He just wanted to lick your face and love you. He knew we were trying to help him.” 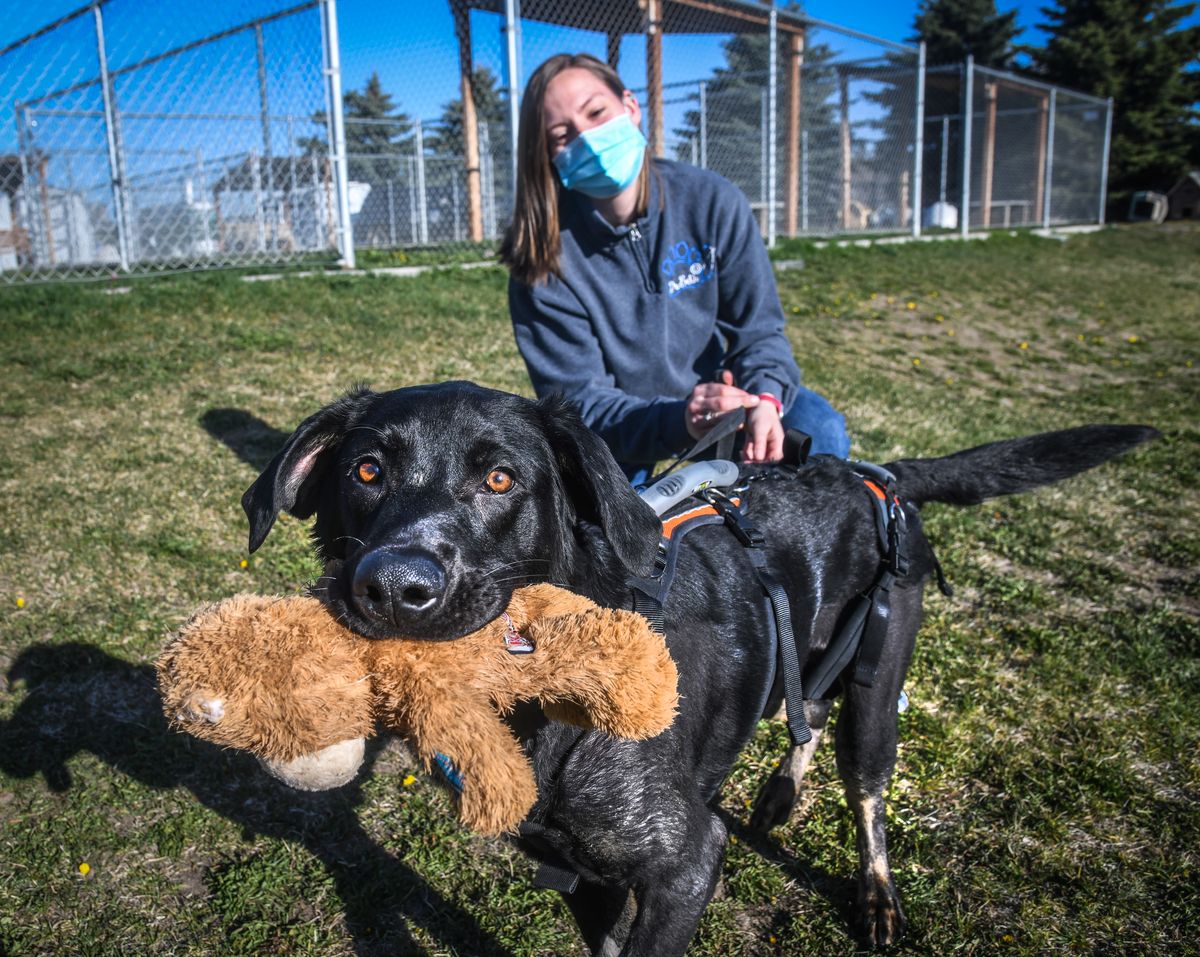 The Lab’s name is Butch, and with broken front left and hind left legs, he wouldn’t be able to walk again without surgery. As a no-kill shelter, SCRAPS never considered euthanasia, O’Keefe said. They scheduled surgeries for his complex fractures at the Washington State University Veterinary Teaching Hospital, prepared to swallow any cost, not knowing that community members would donate about $9,000 for Butch’s surgery.

WSU is a premier vet hospital, said Charlie Powell, spokesperson for the vet school. Much of the equipment is the same bought and used by human hospitals. Powell said at the beginning of the COVID-19 pandemic, there were serious discussions about taking COVID-19 patients as an overflow facility for Pullman Regional Hospital.

Peter Gilbert, the orthopedic surgeon who conducted Butch’s surgeries, has worked and studied in his home country of Australia and then Canada before landing at WSU. He said one of the main benefits of the hospital to local pet owners is access to a variety of specialists.

At the hospital, vets have access to an MRI, utterly sterile operating rooms and myriad gadgets, Powell said. The hospital treats an average of 100 animals per day. They handle small and large pets, exotic animals and have a wing for equine care, with ceilings and doors fit for the large animals they treat.

“The same level of care you’d be referred to a specialist exists now for dogs,” Gilbert said.

Butch’s fractures were “quite complex,” Gilbert said. He had multiple broken bones and each had shards.

Gilbert used a plate to create stability in the fracture locations. While vets would traditionally try to remove and rearrange these fragments “like a jigsaw puzzle,” Gilbert works from a relatively new school of thought by creating structural support with the plates but leaving the fragments in their natural state.

Dogs have a much smaller risk of blood clots than humans, he said. Their ability to pull blood supply from muscles more easily than humans lends to faster healing.

Disrupting the already healing areas can do more harm than good, Gilbert said.

The ICU where Butch stayed in the vet hospital can hold more than 30 dogs. On any given day, it’s buzzing with veterinarians and their students practicing low-risk procedures and checking in on the animals.

Two weeks out from his final surgery, Butch is back at SCRAPS walking around “wonderfully,” O’Keefe said.

“He is eating fantastic, doing all the ususal input-output things normally – he’s just a happy puppy, pretty much,” O’Keefe said.

Gilbert and O’Keefe still are not sure what caused the injuries. He had very little sign of external wounds or cuts that O’Keefe would normally expect from a car accident, though his breaks were severe.

Gilbert said it’s much more common to see two front legs broken, as dogs might jump or fall from some height, sometimes from the bed of a pickup truck. Seeing both legs on one side broken is relatively rare, he said.

O’Keefe said SCRAPS hasn’t gotten any calls from owners looking for their lost dog, but the community has rallied to make Butch better. After posting about Butch’s injuries on Facebook, SCRAPS received more than $9,000 in donations to cover the already discounted bill from the vet hospital, O’Keefe said.

“It’s an awesome story to be a part of,” O’Keefe said. “This is a young dog and, yes, we took a big financial investment in him, but money is not everything. What is the right thing to do for the animal’s life?”