Artist and muralist Amber Hoit was at a gas station when a fellow customer stopped her to ask if she had heard about the verdict in the trial against former Minneapolis Police Officer Derek Chauvin for the murder of George Floyd. The two cheered, Hoit said.

For Jac Archer, on the steering committee of Spokane Community Against Racism (SCAR), the relief felt akin to removing a rotten tooth.

“Once it’s out, that’s better,” Archer said, “but you have a gaping hole and it still hurts.” 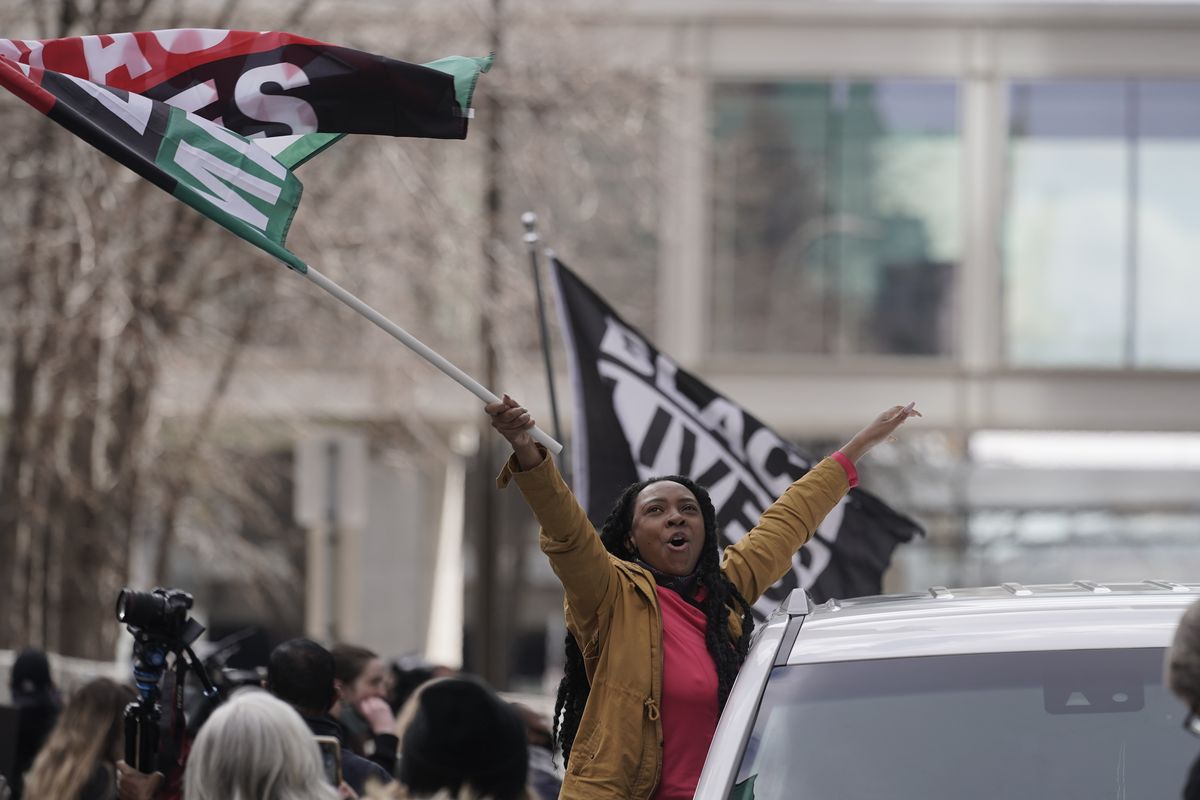 Among those who expressed their surprise and relief at Tuesday’s verdict was Kiantha Duncan, president of the Spokane NAACP.

“I felt relieved because I, 100% in my heart, feel like if that had not been the verdict, that there would likely have been a level of unrest in our nation that we might not have been able to come back from,” Duncan said.

Yet while Duncan knows many are ecstatic, she said “it doesn’t necessarily feel good” that Chauvin is facing time in a prison system “that is broken still.”

Anxiety levels have been “through the roof” for Spokane’s NAACP community, particularly following Floyd’s murder in May 2020, Duncan said. She said the organization will now make sure there are opportunities to support members “in their healing and in their ability to continue to do the work.”

“This has been a lot,” Duncan said, “so I want people to just breathe and really know that we are, as a nation – I think this is a sign that we are moving in a different direction.”

Archer, also emphasizing that one conviction does not fix a broken system, warned Spokanites not to view Chauvin as a “bad apple.” Archer pointed out that several officers stood by as Floyd died and Chauvin had shot one suspect and been involved in the death of another before killing Floyd.

“One conviction will not repair our police system,” Archer said. “And if you feel like it does, you’re buying into exactly what the system says to protect itself – that this is an issue of bad apples.”

“Yeah, we need to deal with police reform, but there is a ton of generational emotional damage that has been done by this kind of police work,” Peace said. “We also need to work on trying to heal our community, because these wounds will not go away by themselves.”

Chauvin was on trial for second-degree unintentional murder and third-degree murder, and second-degree manslaughter. The fact that Chauvin was found guilty on all three counts is a step in the right direction, but there’s still more work to be done, Peace said.

Local institutions, from banks to bars, have been enlisting artists like Hoit over the last several months to create murals that are visual reminders of struggles for justice in the wake of Floyd’s death.

The nonprofit Terrain arranged for 16 artists of color to paint a letter in a Black Lives Matter mural on West Main Avenue that has since been defaced and redone. Hoit painted one of the letters, along with plywood boards for a local bank after windows were broken in a riot in downtown Spokane and a painting for the bar Garageland.

“The boarded windows represented the uglier side of it,” Hoit said. “Using those boards and being able to do that in the moment was huge – so people can see that it’s more than just rioting … it’s important voices that need to be heard.”

On Tuesday afternoon, Hoit was thinking about painting a portrait of George Floyd in her own style with the words “justice served.”

Eastern Washington University also acknowledged the collective trauma many Americans were experiencing while watching the trial and subsequent verdict, and said it sought to meet students’ needs.

The university is hosting a vigil Wednesday afternoon at Foley Library for the campus community to unpack feelings on the verdict. In addition, Kelley said the university made sure counselors, including those of color, were available for students .

Kelley said she’s heard mixed responses from the Gonzaga community on the verdict.

“Everyone had their way of coping,” Kelley said. “There were tears of joy, tears of sadness. Some people felt there’s more work to do and some people just felt numb.”

“This verdict does not bring back George Floyd nor does it erase the deep pain of his family and loved ones. Nor does it absolve us of the work that lies ahead,” the statement read. “Individually and collectively, we must continue to address issues of systemic racism, economic injustice, and other social inequities. We must not rely solely on our colleagues from historically marginalized communities to lead us through these efforts.”

Activist Jim Leighty plans to continue his work on police reform and awareness of police brutality immediately by hosting a local event this weekend that is part of the “Mass Action Against Police Brutality” national movement.

The movement, led by people like Leighty who have been affected by police violence, has plans to work up to a march in Washington, D.C., set for this summer, with smaller events like Leighty’s that feature people who have experience with police violence.

“It’s in our hometowns, it’s where we live,” Leighty said. “We can’t just say those police killings happen somewhere else, because they happen here; it is happening here.”

Three people have been shot by Spokane County law enforcement in 2021. Most recently, a Spokane police officer shot and killed a suspected vehicle prowler early Saturday.

Debbie Novak, whose unarmed son Davis was shot and killed by a Spokane police officer in 2019, plans to speak at the “Mass Action Against Police Brutality” event on Saturday.

Although the officer was cleared of wrongdoing by Spokane County Prosecutor Larry Haskell just a few months after the shooting , Novak later sued over the shooting and continues to picket outside of the Spokane County Courthouse on the seventh of each month because she feels her son was wrongly killed.

Novak hopes the Floyd case will be the precedent for even more officers to be charged for killing civilians, and that more families, like her own, will get justice.

“I’m so happy for the Floyd family,” Novak said. “I think this is going to open up the door for a lot of other families to get their cases tried fairly, or just even tried in the first place.”