The Spokane Audubon Society is accepting donations to help purchase plugs to be planted in shrub-steppe habitat that has been burned. For information visit spokaneaudubon.org.

Or go to wdfw.wa.gov/species-habitats to find out how else you can help.

GRAND COULEE – The sky was still the deep blue of early morning and dominated by the moon when Michael Schroeder leaned in and asked, over the wind, “Can you hear them?”

I listened. I heard the wind, and yes some undetermined noise above the gusts.

Michael Atamian, another biologist with WDFW, isn’t fooled by my half-hearted deception.

“He’s been tuning his ears for these birds for decades,” he said of Schroeder. “You will hear them.”

We’re listening for the mating calls of male sage grouse. It’s early April and these small, shrub-loving birds are on the tail end of their annual stab at finding love – or at least a mate. To do so, they return to the same mating spot – called a lek – year after year. Once there, they primp, preen, dance and sing, all in the name of procreation, “performing their nuptials,” as botanist David Douglas called it.

A key part of that ritual is a sound so distinctive, so unlike any other noise, it’s beyond my abilities as a writer to describe accurately. But I’ll try.

As these birds strut and dance, they coo and inflate two large yellow throat sacs which produce a booming noise. It sounds a bit like a tennis ball being hit off a racket, but fuzzy and softer. Still, this noise can carry nearly two miles.

None of which conveys properly how soothing – and utterly unique – the sound is.

I didn’t hear that noise, at least not at first.

But then, as the sun rose and the wind died, I heard it. Roughly 100 yards downhill, eight or so male sage grouse came into view. Late in the mating season, as it was, no females were in sight. Still, they continued to languorously flirt in hopes a female bird lingered.

A ritual repeated year after year in this exact spot.

With the light came another realization. As far as the eye could see – and in the shrublands of Eastern Washington that’s pretty far – there wasn’t a sage, much less a shrub – in sight.

“There used to be a lot of sagebrush here,” Atamian said. “Less than a year ago, it was a bunch of sagebrush.”

It all burned during the summer and fall of 2020, just 1 acre among more than 770,000 throughout Washington. Those blazes consumed roughly one-half million acres of shrub-steppe habitat, or roughly half the remaining sagebrush habitat in the state.

That’s bad news for many species that depend on the shrub-steppe ecosystem.

But for Washington’s sage grouse, it could be a death knell.

Prior to the 2020 fires, the birds were already in a precarious situation. The statewide population was estimated at 770 birds, living in only 8% of their historic range. Schroeder, a grouse biologist for WDFW, believes the fires destroyed half of the sage grouse’s remaining range.

That’s why the Washington Department of Fish and Wildlife Commission will vote Friday whether to list the sage grouse as a state endangered species. Currently, they are state-listed as a threatened species. If the nine-person commission uplists them, it will make it easier for the state to receive federal money, commissioner Kim Thorburn from Spokane said.

“It raises the visibility and the level of concern, and hopefully it’s something we can take to the feds,” Thorburn said. 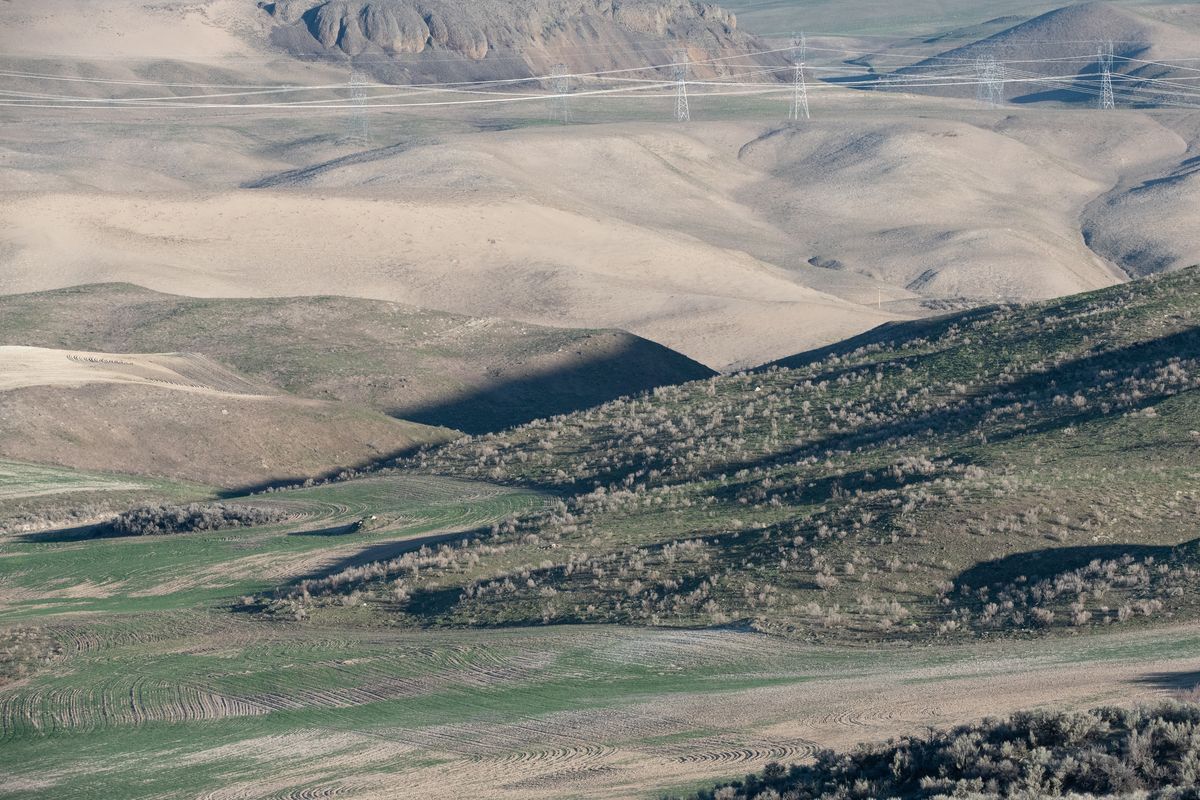 The difference between native shrub lands as seen on the right side of this photo, and agricultural lands, is clear in this April 5, 2021 photo. (Eli Francovich/The Spokesman-Review)

Across the western United States, sage grouse are imperiled, although perhaps not quite as drastically as in Washington. Sage grouse populations have seen an 80% rangewide decline since 1965 and a nearly 40% decline since 2002, according to a 2021 report by the U.S. Geological Survey. As of 2015, there were an estimated 500,000 sage grouse left.

Washington has seen similar declines. At one point, there were 10.4 million acres of shrub-steppe in Eastern Washington, but when European settlers arrived, they cleared much of that historic range for farming and ranching. An estimated 20% of the original 10.4 million acres remains.

Historically, development and agriculture have been the primary threats to sage grouse, but in Washington there is a new danger – wildfire.

The burned area we stood near in early April is a good example, Schroeder said. Prior to the fires, this lek (mating spot) was near good rearing habitat. Female sage grouse lay their eggs in a ground nest hidden underneath sagebrush.

But “going somewhere else” is a difficult proposition. There are plenty of animals – hawks, coyotes, ravens and eagles to name a few – that prey upon sage grouse. In an intact ecosystem, the grouse would have some advantages. Despite their bulky appearance, they are good fliers and even better hiders.

But without sagebrush, much of their evolved advantages is gone. Not to mention that roads, farms and overgrazed land all fragment the birds’ habitat. During the winter, sage grouse rely almost entirely on sagebrush as a food source.

Sage grouse were state-listed as threatened in 1998, and a state recovery plan was completed in 2004. Under that plan, sage grouse population numbers have to fall below 650 birds to be eligible for uplisting. While the state doesn’t know how many birds died in the 2020 fires and subsequent winter, biologists have seen a decline.

“It’s clear that some of them must have died because the counts dropped fairly substantially,” Schroeder said.

“They either died in the fire or the lack of food over the winter,” Atamian said. “Good or bad, luckily the winter was not a hard winter.”

While fire has always been a natural part of the shrub-steppe ecosystem, the proliferation of invasive nonnative grasses – such as cheatgrass – has worsened the impacts of fires. Cheatgrass, in addition to providing little nutrition to native wildlife, is more prone to burning, contributing to a more frequent and severe fire season. Unlike faster-growing grasses, it can take decades for sagebrush to grow back.

Moving sage grouse to a state endangered listing will help raise the alarm, Kehne said, making it easier to get money for habitat work.

Kehne and Thorburn emphasized that the state listing is different from a federal endangered species listing.

“Landowners are so afraid of having endangered species on their land because of the restrictions that occur,” Thorburn said. “But that doesn’t apply for state endangered. The reason we’re interested in it is kind of the opposite. It raises the visibility and the level of concern.”

The story is slightly different in Washington. Because of the vastness and interconnectedness of the habitat and because the state endangered species law is not nearly as strict as the federal one, Washington managers opted to work with landowners to try and preserve existing habitat. Fish and Wildlife commissioners received 1,257 written public comments in support of uplisting sage grouse and one against the proposal.

Programs like the State Acres for Wildlife Enhancement is a voluntary federal program that provides private landowners with resources to conserve or enhance wildlife habitat.

Kehne also points to rangeland fire protection associations as another way to slow the losses. Roughly 365,000 acres in Washington aren’t in any fire district and have no dedicated fire agency responding to range fires. Kehne, and others, have asked the state Legislature to provide money and training to ranchers and farmers so they can form their own fire protection associations, thus responding more quickly to range fires.

“It would be another tool,” Kehne said. “And that’s what you need are tools.”

Tools and hope aside, the future is a bit grim for sage grouse in Washington. There is no denying it.

Yet, standing on a hill as the sun rises, the rhythm of these birds’ lives continued despite the devastation. It’s a poignant and inspiring sight.

Small. Alone. Surrounded by a landscape stripped of a plant they need to survive, these guys still dance, giving it their best shot. For some, that sight is enough motivation.

“As long as there are birds, we are going to keep trying,” Thorburn said.