At least that’s what he sees, and considering he’s a fourth-generation farmer who’s been working some type of a field for almost his entire life, it’s not too much of a leap to say he knows what he’s talking about.

With all of his experience, though, he has to rely on the old-time farmers to understand if there’s ever been a year as bone-dry as this one.

“I haven’t seen anything like this,” Klein said. “I listen to the older farmers and they said 1977 is the last year it’s been like this.”

Whether you talk to a farmer, wheat breeder or economist, they have one message about the wheat harvest in Washington so far after a spring of extreme drought and roasting summer temperatures. 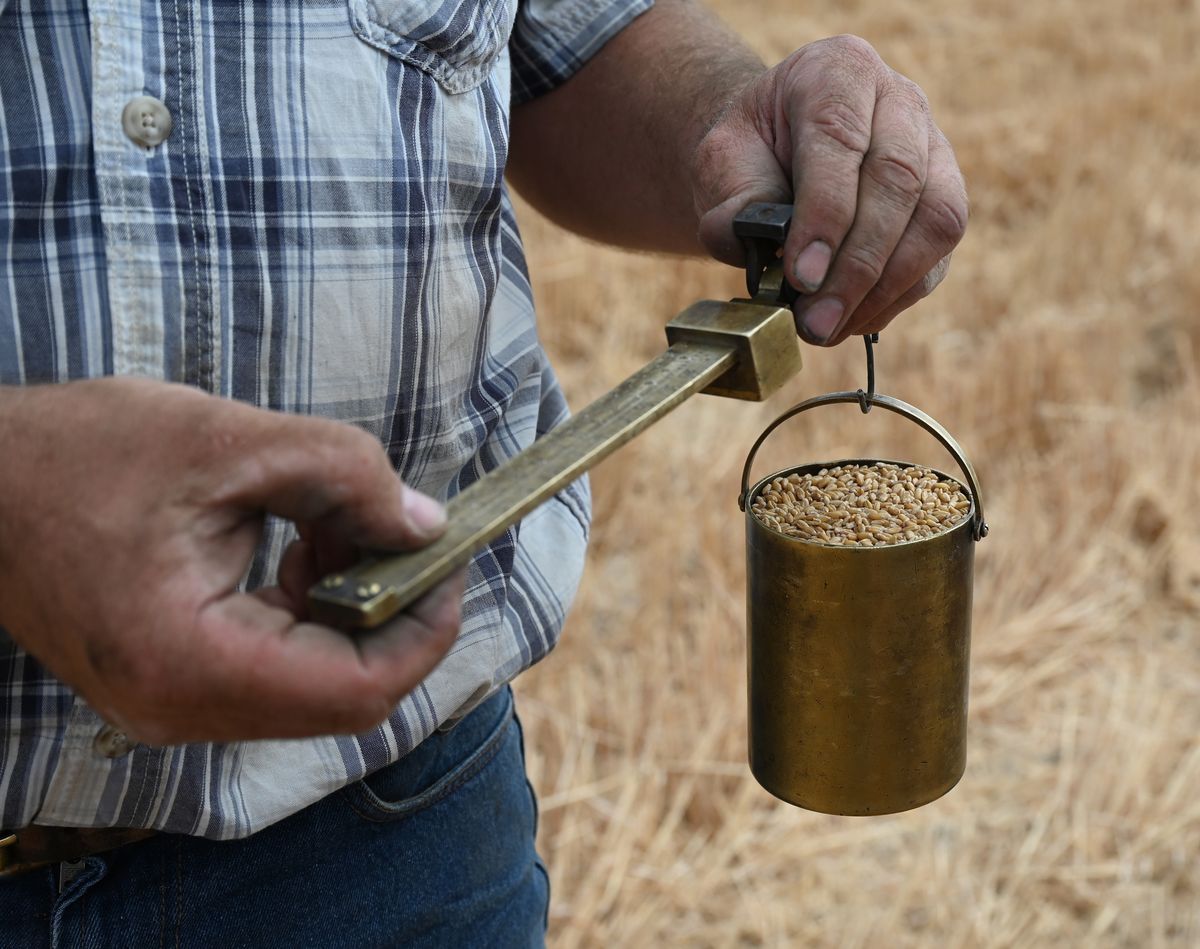 Kevin Klein, who farms near Sprague, Washington, demonstrates a brass balance scale used by generations of farmers in his family to estimate the pounds per acre begin harvested in his fields Wednesday, July 28, 2021. The results of the test tells him that this field is in the 40-60 bushels per acres range, meaning a pretty disappointing harvest, though he has more successful varieties in other fields. He blames the poor harvest on weather extremes, both cold and extreme heat, as well as a lack of moisture. (Jesse Tinsley/THE SPOKESMAN-REVI)

“Generally speaking, for the winter wheat and spring wheat, yields are just down,” said Glen Squires, CEO of the Washington Grain Commission.

Squires said average winter wheat yields last year were about 76 bushels per acre, with one bushel equaling about 60 pounds of wheat.

This year, estimates are showing about 55 bushels per acre, and that number could drop even more, according to Squires.

Last year was a great harvest for wheat yields, which is why the drop-off is so stark. But even compared to an average year, winter wheat yields are just plain down.

And the winter wheat, which is what Klein and many other farmers are harvesting or just harvested, looks like it will be generally better because it got a bit more precipitation in the winter.

“The spring crop is really going to hurt this year,” Klein said.

While experts and farmers said it’s clear that yields are down across the board, yields can vary wildly from farm to farm depending on who got small pockets of rain and who chose the right breed of wheat.

Arron Carter, a winter wheat breeder at Washington State University, said yields could be down 10% or 40% from average depending on how dry a farmer’s region has been.

It can even vary in a farm itself. Klein said that the field he was working on probably got 40 to 60 bushels per acre this harvest, which isn’t great, but other fields could be better, since he planted different varieties of wheat.

But even Klein’s less than ideal harvest is much better than what some other farmers are going through.

“There are some people that are not even harvesting,” Squires said. “They see two to three bushels and they just stop.”

The record drought’s effects may linger into the next wheat planting season as well.

“There’s no moisture left in the soil; we’ve sucked out and it’s all gone,” Carter said. “Even if we get normal rain in the fall and winter, we’re going into the driest soil we’ve ever had.”

Farmers will likely have to wait longer to plant if significant rain doesn’t come soon to their region. Other than less time to grow, delaying planting can mean that the wheat is too short to survive the winter.

When the winter and snow arrive, wheat stops growing and goes into a kind of hibernation. If the wheat isn’t tall or fully developed enough, it can result in winter kill, which isn’t good news for farmers, according to Squires.

And the down year poses more than just current and future yield problems.

Eastern Washington is known around the world as the home of soft white wheat with low protein count, which makes the grain great for using in cookies, crackers and cakes.

It’s why countries from around the world, from the Philippines to Yemen, choose to import Washington wheat, resulting in the state’s $663 million worth of exports in 2020.

But because of the stress put on the wheat crops by the drought and extreme temperatures, Carter said he expects protein levels to be up.

“I think they’re either bad or really bad,” Carter said about protein levels in Washington wheat. Carter said he won’t know for sure until more wheat samples come in as the harvesting season wraps up in September.

Wheat with high protein counts generally gets discounted by buyers, which means less profit for farmers who already have less product to sell than normal.

The good news, at least for Washington, is that most of the world has been afflicted by drought or adverse wheat growing conditions, which means supply is low and prices are up.

Mike Krueger, an agricultural trader in North Dakota, said he expects the wheat market to continue to be favorable towards farmers for the foreseeable future.

But with the harvest going especially well in areas in the Great Plains like Kansas, and looking like it might go well in Australia, Washington wheat farmers will be sweating about losing their buyers to other suppliers with better and more ample product.

However, Krueger expects that many of the growing countries and economies of Southeast Asia will provide plenty of demand in the future, no matter the amount of wheat being produced in other areas.

Washington farmers will just need more rain to get their product and yields back to normal, and back to full strength on the market.

In the end, whether it’s the markets or rain, Washington wheat farmers like Klein will continue to heavily rely on forces outside of their control to decide whether their harvest will be enough to support their lives and families.

“Only once a year do we get to harvest wheat,” Klein said. “That’s our plan and income for the entire year.”

This year, it will be all about crop insurance for Washington farmers, which to an extent protects growers against potential disastrous events like a fall in prices or weather conditions that significantly impact yields. Most Washington farmers have it for years just like this.

Despite the tough year, Klein laughs at the idea of doing anything else with his life. Working on the fields and continuing his family’s legacy, he takes the constant uncertainty on because it’s the nature of what he’s been doing for a long time.