It didn’t happen with a big hit, which might make the loss even tougher to take.

The Vancouver Canadians rallied for three runs in the ninth inning and downed the Spokane Indians 6-3 in the finale of a six-game High-A West series at Avista Stadium on Sunday. 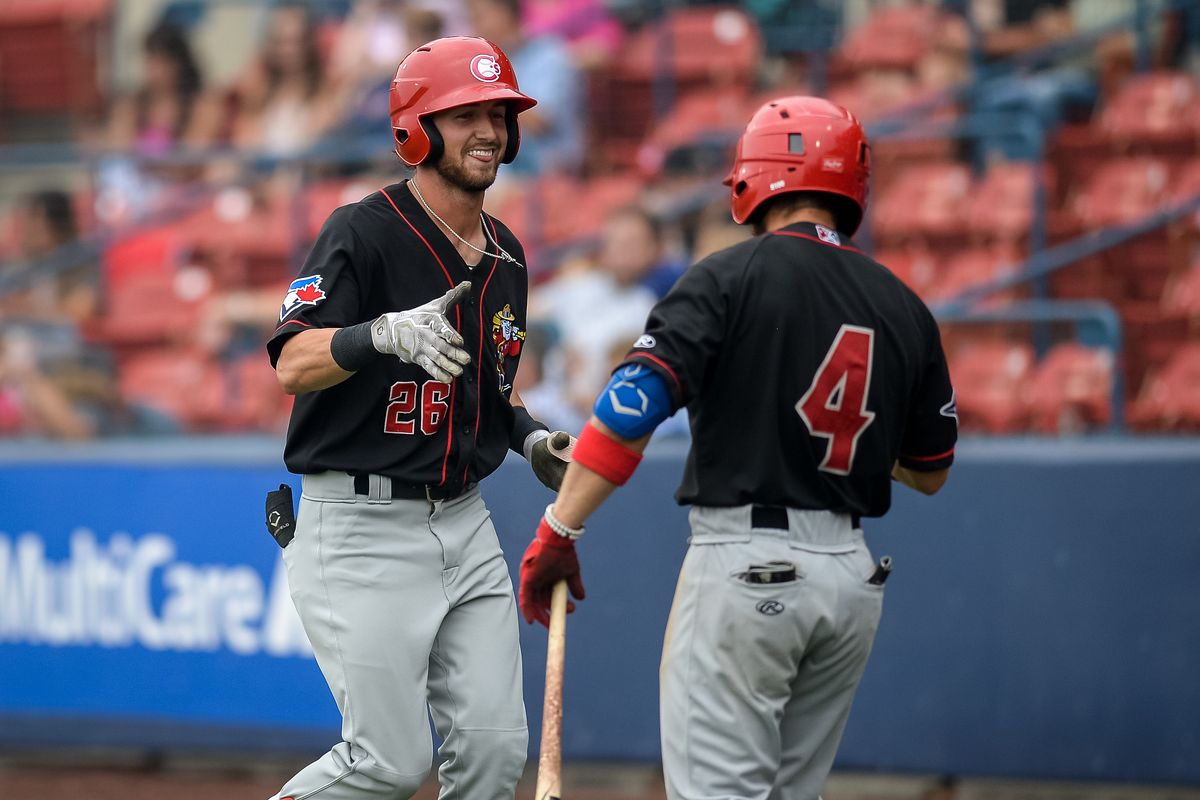 Vancouver Canadians Zac Cook (26) is congratulated by Rafael Lantingua after Cook scored a homer during the final game in a six game series against the Spokane Indians on Sunday, Aug. 1, 2021 at Avista Stadium in Spokane Valley, Wash. The Indians fell 3-6 to the Canadians but won four out of six games of this series. (Libby Kamrowski/ THE SPOKESMAN-REVIEW)

Vancouver scored its runs in the ninth via a groundout, walk and infield single against a pair of Indians relievers.

“Looking back, I don’t remember a ball being hit hard,” Indians manager Scott Little said of the C’s rally. “Then the guy who always hits to left field, punches one to the shortstop who was positioned covering second. So strange to me.

Indians starter McMahon, the league leader in wins and innings, went 6 1/3 innings and allowed three runs on seven hits and three walks with six strikeouts. He threw 69 of his 100 pitches for strikes.

“I felt great,” McMahon said. “I felt like all three pitches were working pretty well.”

The 22-year-old second-round pick of the Colorado Rockies in the 2020 draft has thrown at least five innings in each of his last nine starts.

“I don’t try and look at that too much but yeah, as a starter you want to get at least to the fifth,” McMahon said. “I know I’ve gotten to the fifth with some low pitch counts and they haven’t left me out for the sixth, but that’s all right.”

“You know, we were on fumes again tonight in that bullpen, so it was awesome,” Little said. “I mean, if this kid goes out there and pitches one inning we’re in a heap of trouble.”

The C’s got on the board in the third inning as Zac Cook took McMahon deep on a 1-1 count for a solo homer, his first long ball of the season.

“The solo home run, honestly, it was a changeup. I thought it was a good low pitch,” McMahon said. “I kind of think he was sitting on it.”

The home run bug bit McMahon again in the fourth. Spencer Horwitz led the inning off with a double and with one down, Philip Clarke launched a 1-0 pitch to deep right for his second homer of 2021.

Meanwhile, Canadians starter Nick Fraze breezed through the first four innings. The 23-year-old, a 22nd round pick of the Toronto Blue Jays in the 2019 draft, didn’t allow a run, hit or walk, striking out four.

Vancouver switched to Brandon Eisert in the fifth, much to the Indians’ liking.

Niko Decolati clubbed the first pitch from Eisert over the wall in center for his ninth home run of the season.

Kyle Datres followed with a single to center, but was thrown out trying to stretch it into a double.

That would come back to hurt, as Daniel Cope singled, then AJ Lewis homered to right, his first of the campaign, to tie it.

McMahon got into a jam in the seventh, walking a pair, before Stephen Jones came on to get the last two outs of the inning. Jones pitched 1 2/3 scoreless in relief.

Promoted: Infielder Michael Toglia, who represented the Colorado Rockies in the Futures Game as part of MLB All-Star Weekend, will be promoted to Double-A Hartford on Monday. Toglia leads the High-A West in home runs (17) and RBIs (66).

“Toglia is ready to go,” Little said. “He needs another challenge. I wouldn’t look at the batting average. Everything else is fine. We’ll probably miss his glove more than anything.”

Snapped: Isaac Collins went 0 for 4 for the Indians. In his previous four games against Vancouver, Collins went 14 for 20, raising his average more than 50 points to .303.