For the first time in 111 years, summer chinook are swimming in the Little Spokane River.

Fifty-one of them, to be precise.

The adult fish were released into the Little Spokane River, near the Waikiki Spring trailhead, on Friday by the Spokane Tribe of Indians, alongside the Washington Department of Fish and Wildlife and the Inland Northwest Land Conservancy. 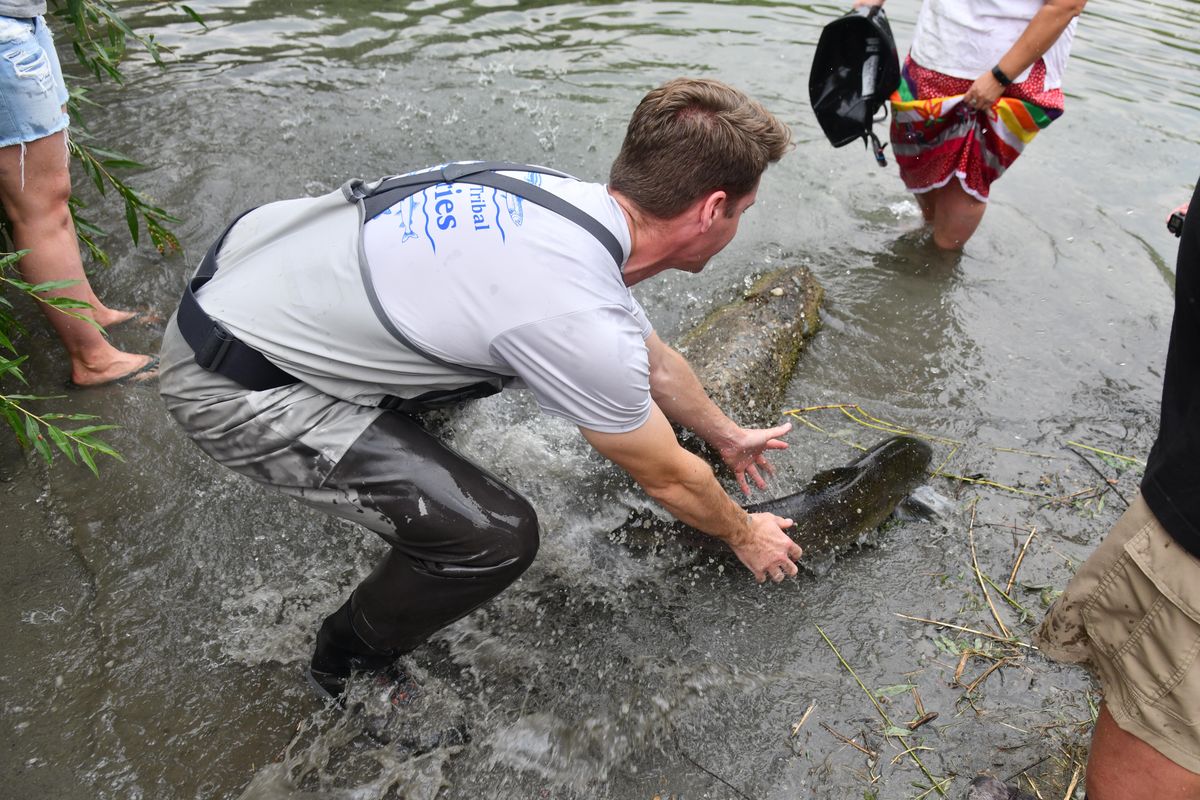 Conor Giorgi, Anadromous Program Manager at the Spokane Tribe of Indians, coaxes one of 51 Chinook salmon into the Little Spokane River, Friday, Aug. 6, 2021. Spokane Tribe of Indians, Washington Department of Fish & Wildlife, Inland Northwest Land Conservancy released the adult Chinook salmon from the Wells Salmon Hatchery into the river. Salmon have not been in the Little Spokane in 111 years. This is part of a larger effort to reintroduce sustainable salmon populations above Chief Joseph and Grand Coulee dams. (DAN PELLE/THE SPOKESMAN-REVIEW)

And while the release was modest and aimed at education and honoring a culture, it continues to set the stage for long-lasting and sustainable reintroduction of salmon into the Upper Columbia River, a watershed rife with habitat but long blocked by two of America’s largest dams: Grand Coulee and Chief Joseph.

That habitat includes the Little Spokane River, a river once so abundant with salmon that one European explorer described the fish as “thick as crickets,” during an 1883 trip through the northwest.

Roughly 80 people attended the release ceremony Friday. Representatives from the tribe, WDFW and the land conservancy all spoke.

Then the adult chinook salmon – ranging from 7 to 18 pounds – were netted, placed in large, rubber bootlike containers, and passed hand-over-hand down the embankment and released into the 60-degree water. As the first one splashed down in a whirl of whitewater, the crowd cheered and whooped.

The fish were brought by truck from the Wells Salmon Hatchery, near Chelan, Washington, where all were tested for various diseases.

“Salmon, for us, it’s kind of a spiritual experience,” said Monica Tonasket, a Spokane Tribal councilwoman. “Those salmon have a spirit.”

And a personal experience, too. Tonasket’s grandfather was forced from his home when Grand Coulee Dam was built, she said. He lived his entire adult life without salmon.

“For me to be able to stand here today and know that I’m making my grandparents, my ancestors proud, I’m overwhelmed,” she said. “I’m just overwhelmed.”

Some of the salmon released Friday are tagged with radio transmitters, which will allow tribal biologists to track the fish in real time, said Conor Giorgi, the anadromous program manager for the Spokane Tribe of Indians. That information will be used to help design and dial in the next phase of the reintroduction effort.

Tribal biologists expect the salmon will spawn and build redds (a gravely nest in which female salmon lay their eggs) much like they did in the Sanpoil River following similar cultural releases.

“A lot of folks don’t remember that this was a world-class salmon stream,” Giorgi said.

Now, the tribes are entering Phase 2, which will introduce tagged salmon into the system to test the habitat and survivability estimates developed in Phase 1. Phase 2 will examine the best method for getting fish up and over Grand Coulee and Chief Joseph dams. All of that should take at least five years, according to tribal biologists.

A key step in that process will be the release of 750 yearling chinook in 2022. Each will be tagged with a passive acoustic tracker that pings stationary receivers as the fish make their way downstream. That data will allow the Spokane Tribe and others to see how many fish survive going through, or over, each dam, as well as how many survive passage through the reservoirs.

The tribe also plans to release tens of thousands of tagged yearling chinook to assess survival through the main stem of the Columbia River downstream of Chief Joseph Dam.

Phase 3 of the plan is to construct permanent passage facilities for fish coming up and down the river.

At the same time, the tribes have had several cultural releases. The Spokane Tribe released 750 yearling chinook in 2019 and 2020. The Colville Tribe released about 60 salmon above Chief Joseph and Grand Coulee in 2019.

Friday’s release was the first on nonreservation lands.

Erik Neatherlin, the executive coordinator for Gov. Jay Inslee’s Salmon Recovery Office, attended the release in a show of support, he said. Inslee is working on a “big salmon package,” which should be released sometime in September.

“This is one of his top priorities,” he said. “Reintroduction and fish passage.”

The release was also made possible because the Inland Northwest Land Conservancy purchased 95 acres – including 1,700 feet of shoreline – west of the Little Spokane River in 2020.

That land is adjacent to the 104 acres that WDFW owns. Those nearly 200 acres now give the Spokane Tribe access to the Little Spokane River, which will be necessary for Phase 2 of the reintroduction plan, Giorgi said.

Back on the banks of the Little Spokane River Friday, Pat Moses, a Spokane tribal elder, blessed the release with a song and put the entire event into perspective.