The Hive is a curious place.

A partnership between Spokane’s largest library system and its biggest school district, it has no books and few students.

Yet there promises to be a flowering of teaching, learning and creating inside the brightly colored building in the East Central neighborhood.

The Hive officially opened on a hot and smoky Thursday afternoon.

“But I’d still be sweating even if it wasn’t this hot,” Andrew Chanse, executive director of the Spokane Public Library, said to about 100 people gathered.

Yes, Chanse was that excited.

The last of eight speakers, Chanse talked about how the library “has meant so many things” during the pandemic, especially the “greater need to listen to new voices.”

“Our hope is that The Hive can be a new platform to new connections, new conversations, new introductions and new ideas,” Chanse said before the ribbon was cut and the visitors gratefully rushed into the air-conditioned building at 2904 East Sprague. 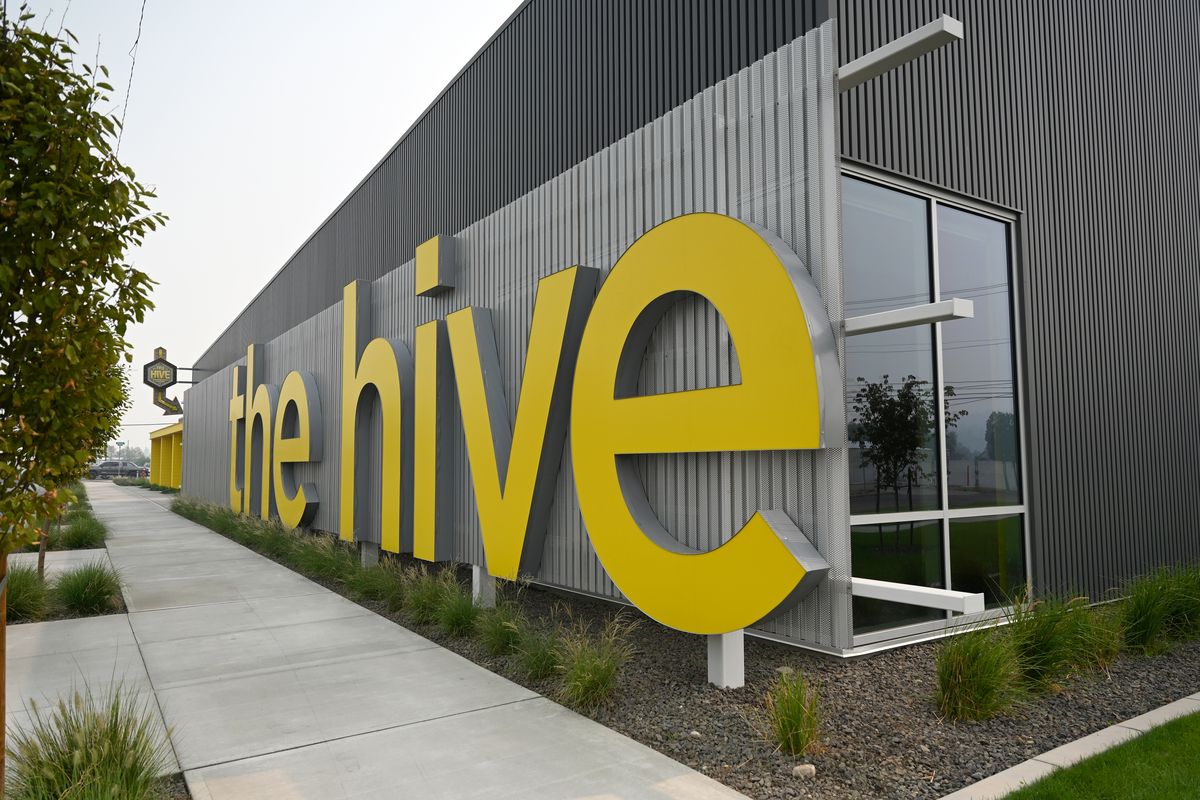 Located on a 2-acre parcel just north of the Libby Center, the $5 million building is the first fruit of the three-way partnership that led to passage of landmark capital bonds in 2018.

The main benefit for the school district is the freeing of space at Libby, where the popular Spanish Immersion program is overtaking capacity as more grades are added.

To accommodate that growth, the district’s Spokane Virtual Learning program has relocated to The Hive, while a large meeting room will host administrative gatherings and training sessions.

The Hive, however, might carve out its identity through the larger community. Four large rooms, all fronting Sprague Avenue, are capable of hosting anything from a sculpting class to an art gallery.

By Thursday, the rooms were filled with artists and their creations.

Shawn Brigman, a member the Spokane Tribe, will explore skinning materials for application to sturgeon-nosed canoe interpretations from the Plateau culture region, as well as the recovery of handheld scale implements like basketry and salmon nets.

Miguel Gonzales is a Chicano artist focused on those interested in groups in the region who have experienced, or are experiencing, language, culture and Indigenous heritage loss.

Shantell Jackson and Stefani Rossi are sharing a studio. Jackson works with painted, textured surfaces and is eager to scale her work up with the space the studio provides. Rossi wants to explore a greater scale in her clay sculptures and paintings that feature careful circles and lines.

Gwendolyn Zierdt Muzzy is a fiber artist who works on a draw loom, incorporating QR codes and source code from the internet into the designs of her handwoven textiles.

Their work may inspire others.

“At Spokane Public Schools, we operate under one philosophy, and it’s really what’s best for students, that’s what we’re going to do,” school board President Jerrall Haynes said of The Hive.

For Mayor Nadine Woodward, the building is an affirmation of the public’s will.

“They said yes, we want free access to information and public spaces … and here we are – promise delivered,” Woodward said.