Box at The Rox

Spokane Boxing Gym is busy in its opening hour on Tuesday morning.

Boxers drum up quick jabs on the speed bag. Jump ropes slash onto the hardwood floor. Trainees grunt as punches thud sturdy bags. 103.9-FM colors in the remaining noise. “We Play Whatever” is their slogan, and Toto’s “Africa” is slithering through a bulky, platinum Panasonic stereo radio from the 2000s. Throughout the chaos of the rhythmic cacophony, Fadya Hakare finds harmony, her pulse.

Born April 10, 1997, Hakare grew up in a small village in Mosul, Iraq. Now as an Iraqi refugee, she’s preparing for her amateur boxing debut Saturday. 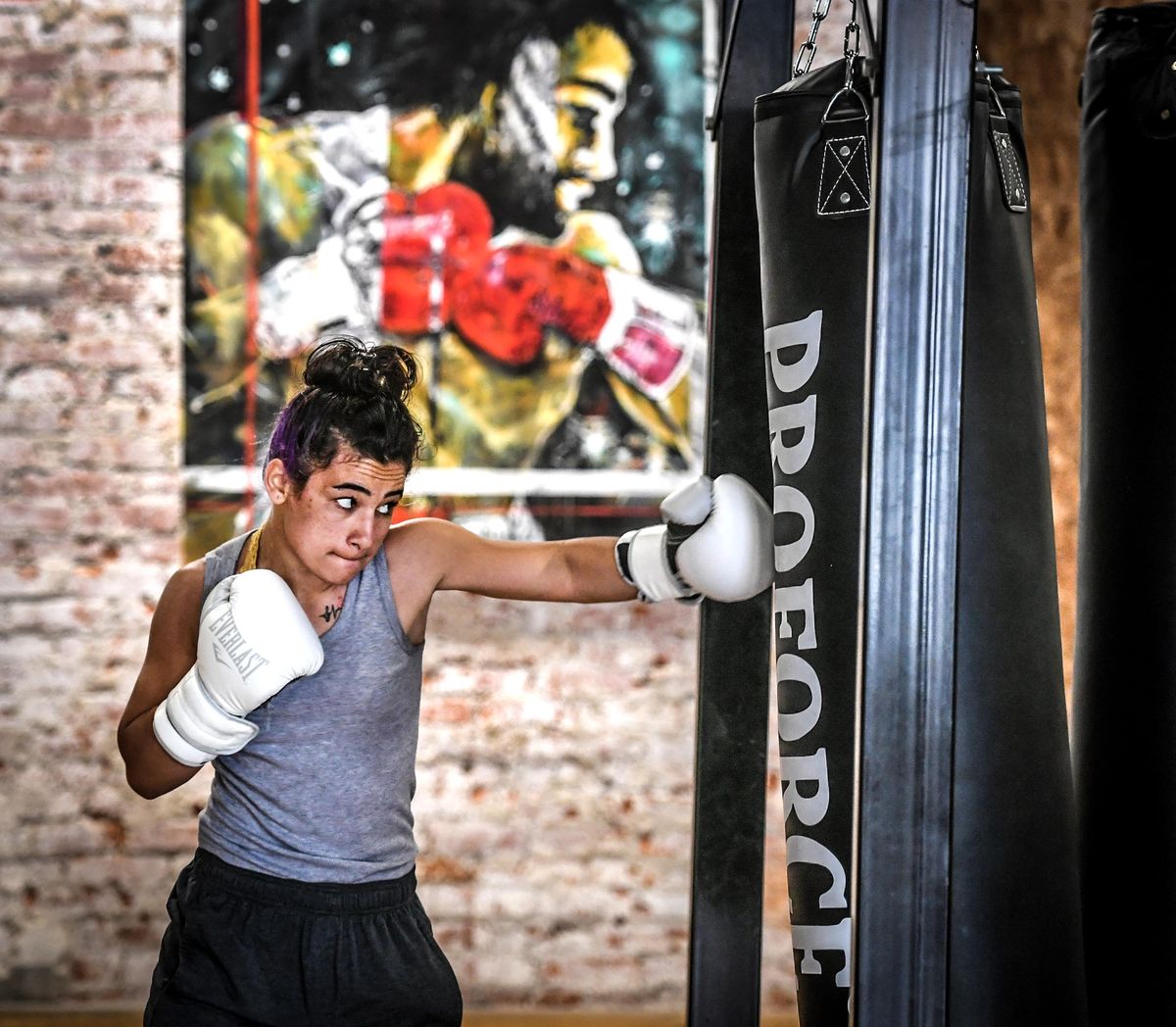 “My life is all about fighting.” Hakare said. “I’ve been waiting for this moment for a long time.”

Growing up, Hakare played soccer, ran 100-meter hurdles and performed in the long jump. But the older she got, the more societal traditions of young Yezidi women weighed on her freedom.

“My father wouldn’t let me continue,” Hakare said, referring to the Iraqi etiquette of homebound wives catering to her husband and children.

“If you put someone in jail, they might think and wonder about the world without going around the world,” she said. “That’s what my life was. It was loneliness, no freedom, just sheltered by my parents.”

In the Middle East, the Yezidi community faces persecutions since extremists view their religion and culture as heresy. In June 2014, ISIS’ attack on Mosul destroyed Hakare’s small village. Thousands of Mosul natives were killed after nearly 1,500 ISIS agents stormed Mosul. Almost 1 million people were displaced and scattered across the world as refugees.

“We were all forced to flee,” Hakare said. “I was in a shelter for two years because of the war, with my grandma.”

After applying in 2016 with a 10-month wait, Hakare emigrated to the United States with the help of World Relief Spokane and their refugee resettlement program. Her parents and six siblings emigrated to Germany.

Hakare remembers getting acclimated in America as a tough process. Only speaking Arabic and Kurdish at the time, she took up English classes as a second language at Spokane Community College. She became a waitress at Chef Lu’s Asian Bistro on the South Hill.

“I like to work in the restaurant because it helps me practice my English,” Hakare said. “I love helping people and communicating with them. At first I was shy, but day by day, I’m just learning.”

After settling into the Lilac City, friendships with Chef Lu’s co-workers and acquaintances from SCC classes began to blossom. She realized people enjoyed hosting fight parties for MMA. She became an avid fan of MMA’s culture and retired fighter Ronda Rousey.

“(Rousey) did the best and her attitude said, ‘I don’t know how tough you are or what you look like, I’ll still beat you to the best of my ability.’ It gives me inspiration,” Hakare said. “I used to watch her because the way she walks, the way she gets mad. I was like, ‘We need more women like her.’ ”

Despite her admiration, kickboxing was a little too erratic just as soccer was too common for Hakare’s tastes. Boxing appealed to Hakare for its technique and individual style, an act of poetry in motion and survival.

“I was like, ‘Wow, I can do this because my whole life is fighting.’ So, why not be challenged?” Hakare said. “Boxing is beautiful fighting. It’s technical. It’s how to protect, how to focus – boxing is like a movie for me. It’s over and over.”

By February 2020, Hakare found herself at Spokane Boxing Gym where she met the owner, Rick Welliver, before COVID-19 wreaked havoc on everyday life.

“Personal stories and their origins matter,” Welliver said. “They wanna rise above it all and boxing provides that. Society has a tendency to turn their back on people like Fadya, and here, we welcome her.”

He noted Hakare’s mentality (“bringing herself no matter the circumstances”) was a strong asset in developing her work ethic early on, and would lead her to steps like Saturday’s amateur debut.

“She kept showing up in the coldest months and even during the pandemic,” Welliver said. “She always found a way to get here after work and put the time in. She demanded more of my time.”

Welliver invites Hakare’s ability to use her past as her purpose. Boxing, Hakare said, is an outlet for people to battle their past hardships and improve their current lives.

“I enjoy boxing,” Hakare said. “When I punch the bag, I remember my Iraq memories, but I notice how much faith I have in my body. It takes my pain away a little bit. Boxing’s helped me mentally, stay active and in shape. It helps me stay away from things like alcohol, cigarettes and drugs.”

As her debut approaches, Welliver noticed Hakare’s time and commitment has helped her build a strong bond with other boxers. They weave through their complicated schedules as the intimacy of sharing the ring together shapes their relationships outside of it.

On the open second-floor balcony, Hakare and other boxers set up meetings to spar later.

“I can’t today,” Hakare told one of the other female boxers. “I have to work at 5. And I told my boss I’d work. I’m focused, but I still have to eat, you know?”

Hakare also won’t be available at 1:30 p.m. Saturday when she will make her amateur debut in the 112-pound weight class.

At 5 feet, Hakare is taller than her opponent by a few inches. Hakare is 24. Her opponent is in her early 30s.

The fight opens a new chapter for Hakare. She’s been waiting for an opportunity to live within the life she’s built for herself, a life of fighting not only by choice, but by passion.

It is a taste of freedom she’s craved for years.

“I will put whatever I have in the ring and go for it,” Hakare said. “I will let my hands go, my eyes focus, my mental state empty and just go for it. It’s my opportunity.

“If I win this fight, I can win my whole life.”