A GRIP ON SPORTS • Every once in a while baseball still catches me. Grabs on and holds tight. Sticks. It did last night with the M’s. All the way to the end.

• We sat in the TV room for four innings. Quietly watching the Mariners and Toronto battle for the spot in the wild-card standings right behind the Yankees. It was 2-2 the entire time as both teams made pitching changes, shifted defenders around, inserted pinch-hitters, tried to rally.

Heck, there was even a sacrifice bunt thrown in. And yet no one scored. You know how some barbarians tell you they don’t like soccer because nothing happens but what they really mean is no one scores? The four innings were like that. Except, like a soccer match, a lot was happening. 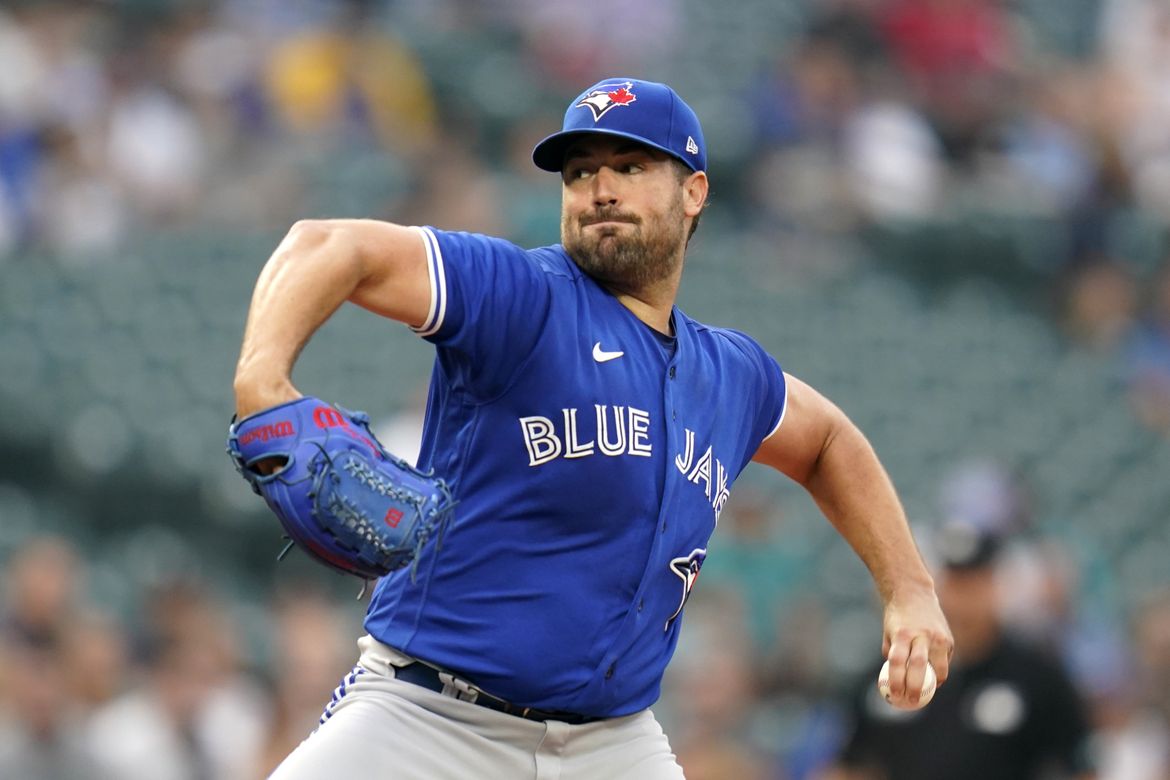 The Blue Jays’ Robbie Ray was throwing a slider that threatened to end a couple of careers. Diego Castillo tried to do the same out of the M’s bullpen, but his slider wasn’t nearly as sharp. In the end, though, it was just as effective against a Jays lineup that is hard-wired to swing hard.

And still, the Blue Jays probably should have won. Drew Steckenrider, who followed Castillo to the mound in the top of the ninth, couldn’t locate his pitches. Well, he did find a couple bats, including Alejandro Kirk’s to lead off the inning. Pinch-hitter Corey Dickerson followed with another single before Santiago Espinal moved pinch-runner Breyvic Valera and Dickerson up a base with a sacrifice. The M’s walked George Springer, bringing Marcus Semien to the plate.

And Steckenrider finally hit a spot, jamming the former A’s shortstop with a fastball blooped foul down the right-field line. Ty France took off in pursuit and ran the ball down, catching it over his shoulder, running away from the plate.

Valera rightfully tagged and tried to score. But France’s throw was perfect. One-hopped Tom Murphy at the plate with time to spare.

Just enough time to spare, actually, as Murphy, who dropped a tag earlier in the week, slow-motioned this one, using two hands on the ball and barely brushing Valera’s arm as he tried to sneak it in. So barely, in fact, umpire Jim Reynolds missed it. It took replay to show the glove, maybe just the glove’s leather straps, grazed Valera in time.

Adam Cimber, a Puget Sound-area native, walked out of the bullpen in the bottom of the ninth and quickly got two outs. But then the strike zone disappeared for him. He walked Kyle Seager. He walked Abraham Toro. He couldn’t field Luis Torrens’ high hopper and everyone was safe. Jarred Kelenic was due up, so the Jays went to the pen again.

Lefthander Brad Hand, who was supposed to be the bullpen savior in Washington but instead became trade-deadline fodder, threw four pitches to the left-hand hitting Kelenic. None were all that close. The rookie outfielder stood in the batter’s box and watched. Took the bases-loaded walk – then didn’t walk. Jumped, actually, all the way down to first base as Seager wandered home with the winning run.

For four innings nothing really happened. Except everything did. And the M’s postseason hopes, on life support in a lot of ways, still have a pulse.

The A’s lead the American League wild-card race. Then it’s the Red Sox a game back, the Yankees 2.5, the Jays 3.5 and the M’s 4.5. This weekend is crucial for Seattle. It’s a chance to strike a blow against one of the three A.L. East teams it is chasing. The only other chance? That comes in mid-September, when the Red Sox visit for three games.

While the Mariners face mainly the West the rest of the way – they have nine games each against Oakland and Houston, six against the Angels, three vs. Texas and 14 against everyone else after Toronto leaves town – their wild-card rivals in the East should beat each other up down the stretch.

If Seattle wants to be in the playoffs for the first time since 2001, then a couple more wins over the weekend would certainly help.

Doesn’t matter how they happen either. Home runs – Murphy hit one early last night – or bases-loaded, game-winning walks. Either way is fine. And worth watching. 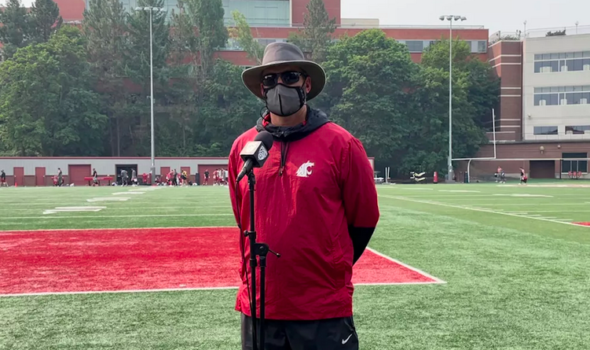 WSU: If you thought Nick Rolovich’s decision to not get vaccinated was going to fade from the public eye, think again. With Washington State announcing this week new COVID-19 policies for students, Rolovich’s stand is being battered again, this time by West Side folks. … Elsewhere in the Pac-12 and college sports, Jon Wilner has a mailbag full of conference questions. … Did BYU’s NIL move change how everyone will look at walk-ons? … The Pac-12, ACC and Big Ten are in talks. For what, no one knows exactly, but it is in response to the SEC raiding the Big 12 that’s for sure. … There were a lot of things about Washington football that were missed last season, including the Apple Cup. … There won’t be a Civil War anymore. … Oregon State will allow fans at next Saturday’s scrimmage. … Oregon is happy with its running back depth. … Colorado is hoping for the same. … The linebackers at Utah seem to get along. … A USC linebacker has already said this will be his final college season. … Quarterback Dorian Thompson-Robinson returned to UCLA’s practice. … Arizona State has lost a defensive lineman to a season-ending injury. … Nope. No quarterback decision at Arizona. … In basketball news, Colorado won the first game of its Costa Rica tour. … One Arizona player is happy to have stayed.

EWU and Idaho: Larry Weir joined his Eastern broadcast partner Paul Sorensen for the latest Press Box podcast. They talk Eagles, Cougars and more. … Around the Big Sky, there are a lot of defensive changes taking place at Montana State. … Nothing ever changes with Weber State’s defensive line. It is always solid.

Preps: Sometimes obituaries are hard to slot in one spot in this space, mainly because the life of the person touched more than one part of our area. That’s the case today with Chuck Stewart’s obituary of Fred Crowell, who died Wednesday after 12 years of dealing with cancer. Crowell is most famous in the Spokane community as the founder of NBC Camps, which influenced a countless number of local high school basketball players of all genders. But he was also a college basketball coach, a motivational speaker, an author and, most importantly, the patriarch of a large and successful family. His presence in the area will be missed. … By the way, if you want to know what’s coming here soon, football has already started in Utah.

Indians: Another solid pitching performance, another Spokane win over Tri-City. Dave Nichols has this story of the Indians’ 5-1 victory in Pasco. 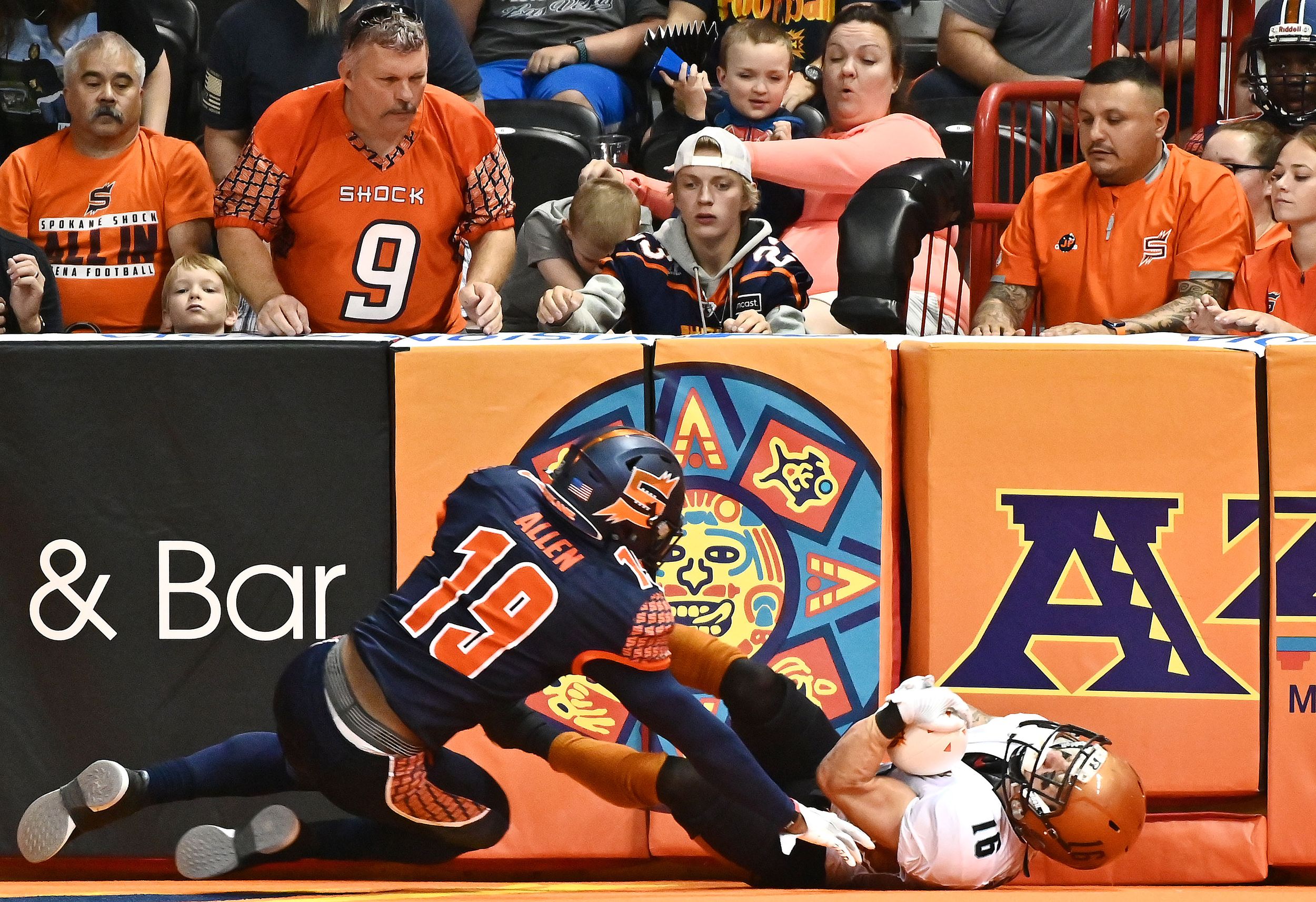 Shock: Spokane’s regular season is over, finished with a four-game losing streak that culminated in Friday night’s un-IFL-like 30-20 loss to visiting Arizona. Justin Reed has the game story from the Arena and James Snook adds a photo report.

Mariners: Besides the stories about the 3-2 win over Toronto in an unusually pro-Mariners T-Mobile (there were few Blue Jay fans in attendance), we also can pass along the news Kyle Lewis took batting practice and looks to be about ready to return to the lineup. … Remember the M’s trade-deadline deals? How have they worked out? It’s complicated.

Seahawks: The Hawks play their first preseason game today in Las Vegas against the Raiders. The most important thing to hope for? Keep everyone healthy. … Sooner or later Seattle and Duane Brown have to agree on a deal. Either that or the season may be (figuratively) over before it starts. … The season may be over for tight end Colby Parkinson, who broke his foot again. … Pete Carroll is positive Jamal Adams will sign an extension soon.

Kraken: The roster is coming together. And we can pass along some answers to a few questions.

• If the M’s hadn’t scored in the bottom of the ninth? I was leaning toward going to bed. It was getting late and extra innings didn’t seem all that worthwhile. Luckily, we didn’t have to make the choice. Until later …