In the 1940s, Clark Gable was the King of Hollywood.

Millions of people around the world knew and loved him from his iconic roles in films like “Gone With the Wind,” “Mutiny on the Bounty” and “It Happened One Night.” Gable, with his trademark mustache, probably couldn’t have walked down a busy street anywhere in America without being recognized.

But in early January 1943, the 41-year-old Gable, a star even among stars, walked onto Fort George Wright in Spokane as a common soldier, ready to train as an aerial gunner alongside teenagers before heading overseas to fight in World War II.

Gable’s arrival at Fort George Wright would have been a topic of discussion among everyone on base, regardless of rank. The men he trained with during the few weeks he spent in Spokane undoubtedly told stories for the rest of their lives about meeting the Hollywood legend.

But there’s relatively little documented evidence of Gable’s time in Spokane, and his training has, to some extent, been shrouded in mystery.

Photos donated to Fairchild Air Force Base by the son of a man who trained Gable in aerial gunnery have helped remove some of that mystery.

One of the images shows gunnery sergeant Merrill “Bill” Willan, Craig Willan’s father, next to Gable as the movie star trains in a turret. The other image shows the two men standing side by side holding shotguns.

The photos, which are in remarkably good condition, provide new historical evidence of what Gable was doing when he was here, Horton said.

“We had originally thought that he had received his turret training at a different base,” she said. “This is a part of history that I had not yet found.” 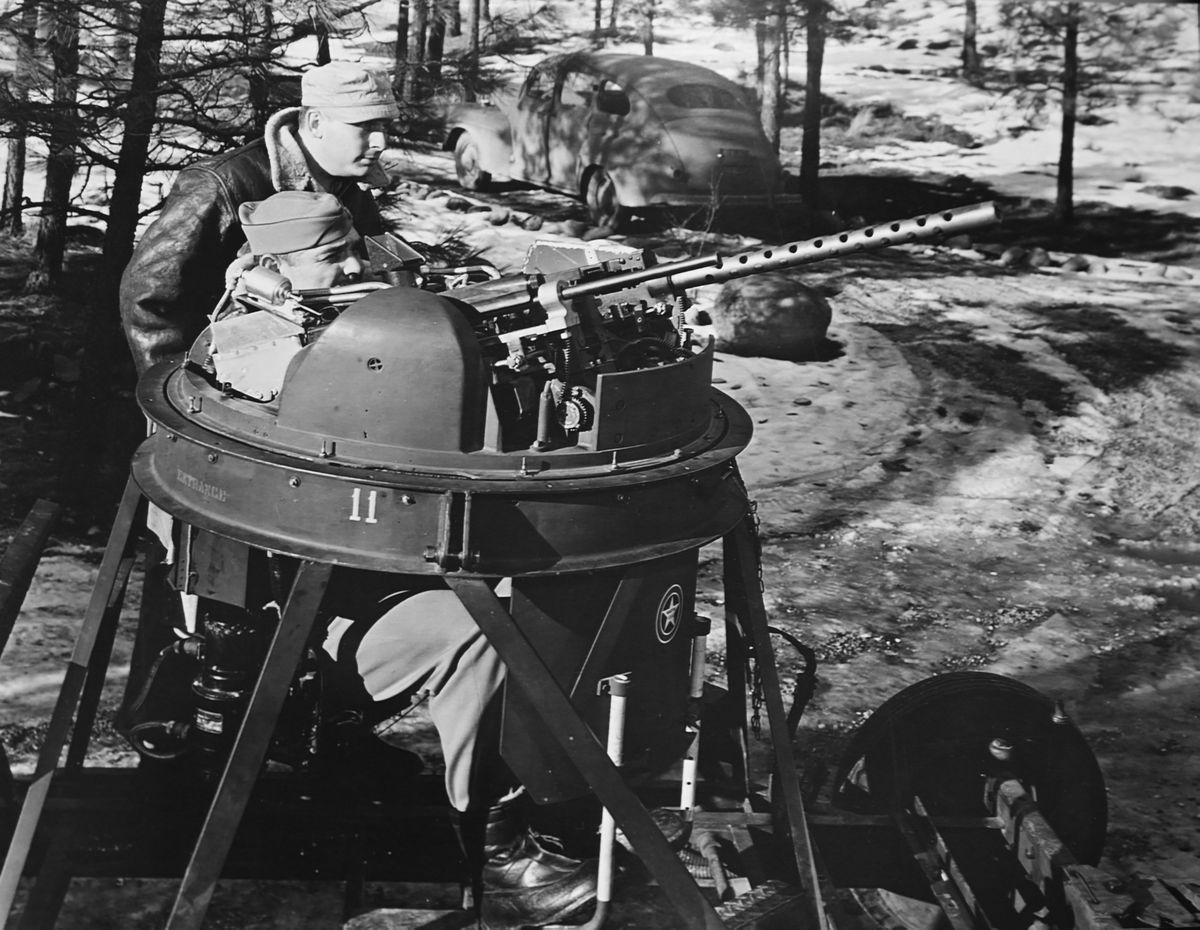 Movie actor Clark Gable sits in a turret gun simulator during gunnery training with gunnery sergeant Bill Willan in January 1943 at Camp Seven Mile near Spokane. The movie star was training as a turret gunner at Camp Seven Mile, which is now inside of Riverside State Park, and staying at Fort George Wright, though it wasn’t a part of his assignment, which was to make films for the war effort. (Fairchild Air Force Base archive)

From the silver screen to the battlefield

After the Japanese bombed Pearl Harbor in December 1941, a slew of famous Americans signed up to fight in World War II.

Gable did not immediately enlist, but he reportedly tried. His wife, actress Carole Lombard, sent a telegram to President Franklin Roosevelt on Gable’s behalf asking how the King of Hollywood could join the war effort. Roosevelt telegrammed back, telling Gable to stay where he was.

Cases like Gable’s were tricky for elected officials and military leaders. From a national morale and recruiting standpoint, there was enormous value in having celebrities fight.

At the same time, if a celebrity died in battle it could be emotionally devastating for the country, so leaders like Roosevelt often tried to keep beloved figures out of the military. As a sort of compromise, officers tried to keep celebrities out of harm’s way when they did enlist.

“Most of the high brass during the war did not want these guys flying combat,” Craig Willan said. “They didn’t want to kill them off.”

At first, Gable obeyed Roosevelt’s orders and remained a civilian. But his life changed in January 1942.

Lombard, in the middle of a war bond selling tour, died in a plane crash. Gable was devastated, and by some accounts never fully recovered.

Following Lombard’s death, Gable felt he had to do more for the war effort, Horton said. In June 1942, he walked into an Army recruiter’s office and enlisted.

“He defied a direct order from the president,” Horton said.

Gable would serve as part of the First Motion Picture Unit of the Army Air Forces. The Army tasked the unit with making propaganda and training films. Gable’s job would be to make a movie about the combat experience of aerial gunners, and the film, narrated by the world-famous Gable, would be a helpful recruitment tool.

According to the Spokane Daily Chronicle, Gable received the silver wings of an aerial gunner on Jan. 7, 1943, in Florida. He arrived in Spokane a few days later as a first lieutenant.

Gable was only here a few weeks. Details about his stay are scarce, but thanks in part to the pictures donated by Craig Willan, it’s clear Gable practiced shooting down Nazi planes in Spokane.

A few weeks in Spokane

Craig Willan said his dad was an elite marksman.

“He had the gift,” Willan said.

The elder Willan enlisted in the Army Air Corps during World War II. He went to gunnery school and soon found himself as part of the 8th Air Force in England. He flew with a bomb group known as the “Bloody Hundredth,” which his son says was a crew of “misfits.”

Bill Willan was a ball turret gunner. During one combat mission, Willan’s plane was hit. He bailed out and parachuted to the ground, and hurt both of his knees during the landing.

With his injured knees, Bill Willan couldn’t get back into the cramped ball turret. So he became an aerial gunnery instructor, and his first posting was at Geiger Field, which is now the Spokane International Airport.

Bill Willan shared his wisdom as a marksman with many aerial gunners, but when he told his family about his time in Spokane, he often talked about the weeks he got to train Clark Gable.

It might seem odd that so little information exists about Gable’s time in Spokane, given the star’s fame. But when you consider the historical context, it makes more sense, Craig Willan said.

The military didn’t want photos of its installations in the U.S. to become widely distributed, and with good reason. The fear was that if the Japanese obtained photos that revealed the locations of key facilities, those facilities could become targets. That would have been devastating if the Japanese had achieved a widespread bombing campaign on the U.S. mainland.

Craig Willan said soldiers weren’t supposed to carry photos off base. But Bill Willan had a problem with authority, his son said, and it appears he smuggled the Gable photos out.

“How he was able to get these pictures, I have no idea,” Craig Willan said. “That was his defiance of authority.”

While stationed in Spokane, Gable lived at Fort George Wright, part of which is now Spokane Falls Community College. He trained at Camp Seven Mile, which is now part of Riverside State Park.

Gable must have been a good shot, Craig Willan said. He had to be, because his job as a turret gunner on a B-17 was to protect the bomber from Luftwaffe planes during combat. Without gunners, the bombers would have been left defenseless.

Soon after finishing his aerial gunner training in Spokane, Gable headed to Europe. He flew in at least five combat missions, although Horton noted his flight buddies say he flew more. There isn’t a ton of information on Gable’s military exploits.

The Army deliberately kept secret the locations of international stars such as Gable. American actors could become Nazi targets, and if they became targets, the lives of everyone in their units would be in extra danger.

“They were very careful not letting anyone know where he was,” Horton said. “A lot of his records are a little hard to decipher, they were trying to be as protective of him as possible.”

And the Nazis wanted Gable.

Adolf Hitler had a fascination with collecting art. When he learned Gable was fighting with the Allies, Hitler wanted him captured alive, almost as if he were a piece of living art.

“According to lore, Hitler himself put a bounty on Clark Gable’s head,” Horton said.

While in Europe, Gable gathered footage for the documentary General Arnold had ordered him to make. The film, “Combat America,” came out in 1945.

Many enlisted celebrities received special treatment in the war, and those assignments often kept them safe. Gable, with his special assignment from the head of the Army Air Forces, wasn’t treated exactly like everyone else.

But even during his time in Spokane, it appears Gable wanted to be thought of as a normal soldier.

When he was at Fort George Wright, Gable was offered special housing in the officer’s quarters, Horton said. But Gable wanted to be with his fellow enlisted men.

In a Daily Chronicle story documenting Gable’s arrival in the Lilac City, the King of Hollywood said he was only focused on one thing during his time here.

“I’m not a film star now,” Gable said. “(I’m) just another lieutenant who, like all the rest, is anxious to do a good job for my country.”

Editor’s note: This story has been updated to correct the year Clark Gable was commissioned as an aerial gunner.