A wildfire raced through more than 6,000 acres Monday east of Ford and filled the horizon north of Spokane with a wall of smoke.

Fire officials called for the immediate evacuations of Ford and several communities as fire threatened hundreds of buildings. Residents gathered their animals, belongings and farming equipment to avoid what they feared could be a worst-case scenario as strong steady winds and gusts of 30 miles per hour pushed what started as a brush fire Sunday afternoon.

Fire crews, already strained on resources, struggled to map the full size of the Ford Corkscrew Fire as it moved northeast. The fire burned quickly through nearby timber.

With lower temperatures and precipitation expected in the area for Tuesday, some relief was in sight.

The raging Ford-Corkscrew fire took eight homes and ballooned on Monday night, more than doubling in size from 6,000 acres to more than 15,000 acres by Tuesday afternoon. | Read more

Jennifer Simmons, meteorologist with the National Weather Service in Spokane, said forecasts included some rain, higher humidity and winds coming from the north. This would likely mean more smoke in Spokane, but could help lower the fire hazard – if only temporarily.

“We aren’t going to see a whole lot for Spokane, but hopefully we’ll have more precipitation in the north and Panhandle areas,” Simmons said. “Unfortunately we are looking at a dry rest of the week.”

Officials set Level 3, or “leave now,” evacuation orders for east of State Route 231, which was closed Monday, to Stephenson Road near Clayton.

Level 2 orders, or orders telling residents to be prepared to leave at a moment’s notice, were set for Loon Lake as well as parts of Tum Tum and Clayton. Springdale was given a Level 1 order, which meant residents did not have to leave immediately but needed to be aware of danger in the area.

Hannah Roach, 18, had her six other family members as well as her 16 pets – including geckos, lizards, dogs and birds – packed into their pickup truck as they stopped for some groceries at a gas station in Loon Lake. Behind her, smoke plumes and glowing orange flames crept over the hillside near where her family lived. 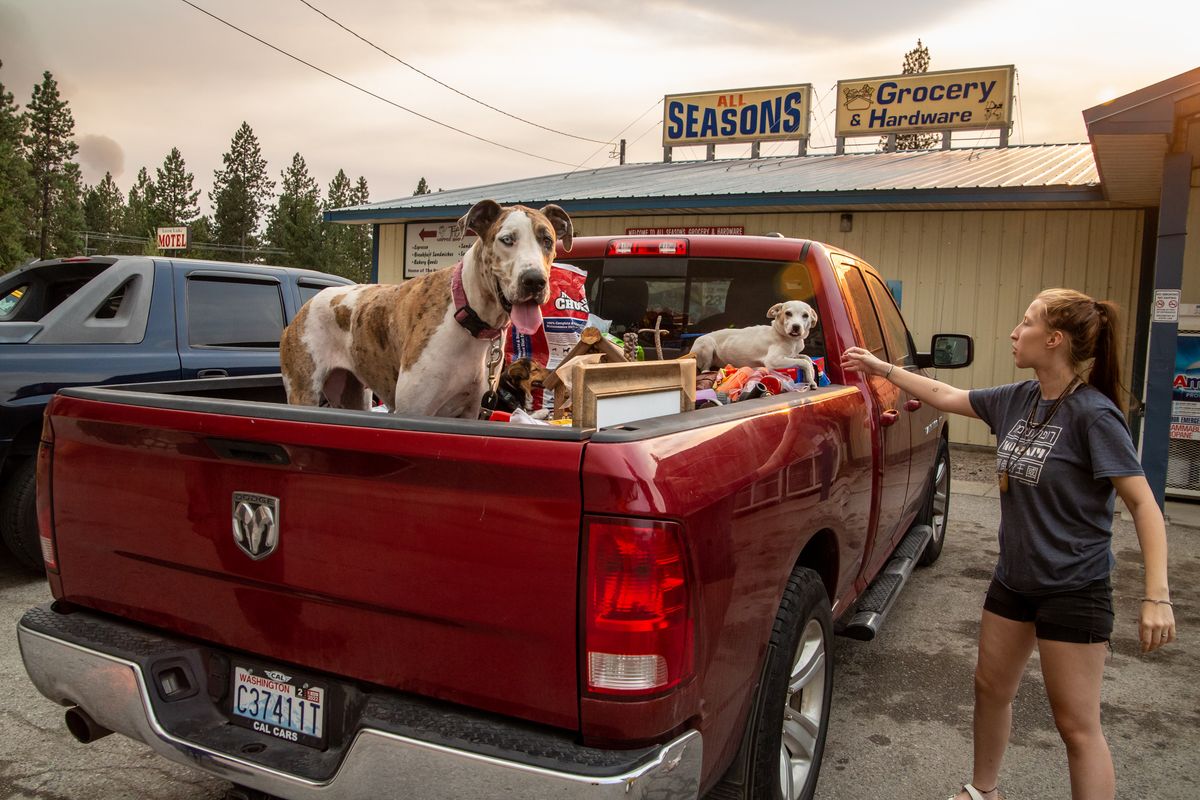 Hannah Roach, 18, checks on dogs Ember, Kiki and puppy Molly while evacuating the Ford Corkscrew Fire at Loon Lake on Monday afternoon. As of Monday evening, the fire had burned at least 6,000 acres. (Libby Kamrowski/THE SPOKESMAN-REVIEW)

“We didn’t actually hear about the fire, we saw it first,” Roach said. “We decided to get ahead of it. We made sure to grab as much pet food and toys as we could.”

“We saw the orange glow kind of come up over the mountains, and I thought, we should just get out of here,” he said.

Fitzhugh said he was no stranger to fires, having lived in the West his whole life, but each fire has its own challenges.

“I served two tours in Iraq and I’ll tell you, I’d rather fight in the desert than fight a fire,” Fitzhugh said. “In the desert, you can see what’s coming and you can try to stop it. When the fire’s coming at you, you have no control. It could change at any moment. And you can’t stop it.”

Isabelle Hoygaard, information officer with the Northeast Region of the Washington state Department of Natural Resources, said fire officials expected the wind to continue to fuel “extreme fire danger” overnight. Hoygaard said they hoped to have a more clear map of the fire once the progress slowed due to the rain and cold front planned for Monday night.