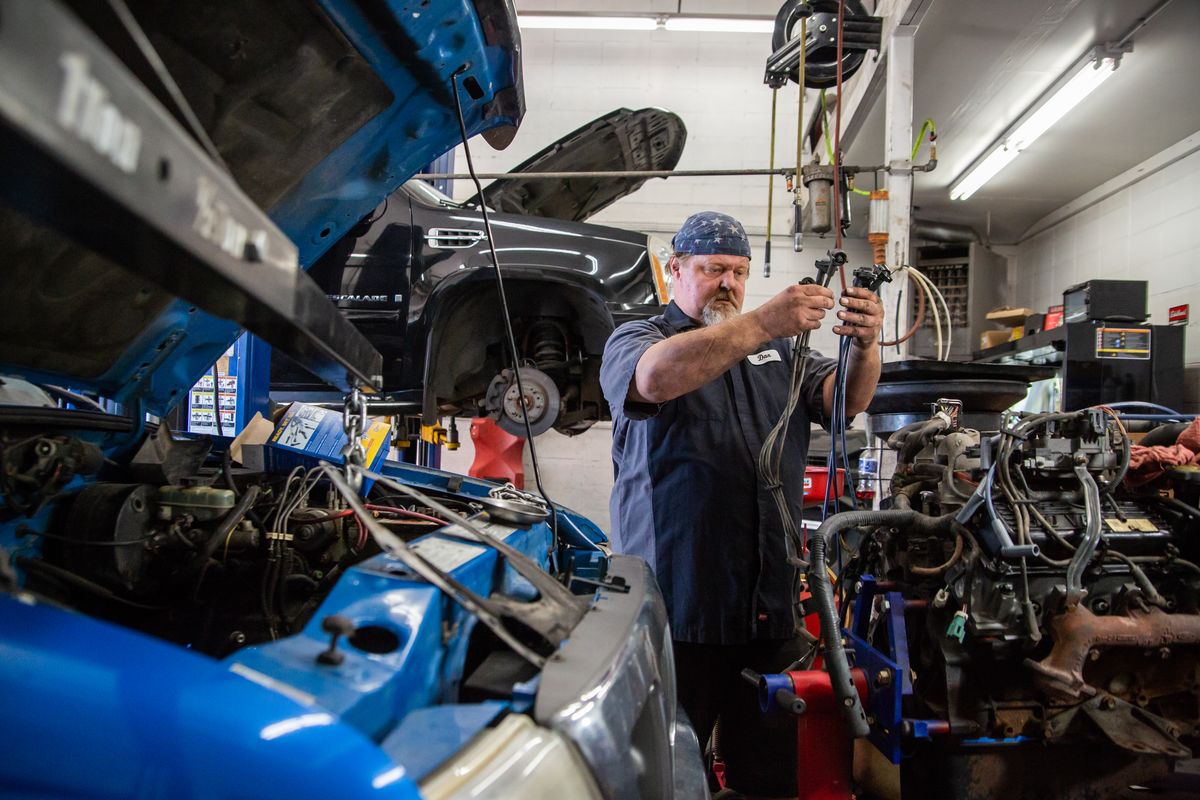 Auto technician Dan Lane of Save More Automotive on N. Hamilton St. works to rebuild the silverheads on a blown head gasket belonging to a Ford pickup truck on Monday, Aug. 16, 2021. Lane’s career in cars spans over 25 years, and he said that the shop has seen a “steady flow” of customers, more of which that have chosen to keep their cars and fix more expensive issues than to trade-in due to the skyrocket price of cars in the current market. “Maintenance is the key to survival: keep your car maintained and it’ll last longer,” Lane said. (Libby Kamrowski/The Spokesman-Review)

Spokane mechanics are facing the frustration of a labor shortage at a time customers are clamoring for repairs to keep older cars running as they try to avoid the soaring costs of a new or used car.

And that’s before a recent record heat wave hit Spokane that killed batteries, stressed cooling systems and convinced scores of owners to finally get their air conditioners fixed.

Microchip shortages have turned the car business into a rarified space in which some used cars and trucks are commanding new-vehicle prices.

As a result, customers are more willing to put money into their old jalopies rather than taking on years of new auto loan debt, said Austin Adair, title service writer at Mechanics Pride Tire and Automotive at 1126 W. Second Ave. .

“We have lots of vehicles that are coming in that are fairly well aged,” Adair said. “People are very willing to pay $500 or $1,000 and are even putting new engines in to alleviate getting a new car payment and debt they don’t need.”

Misty Sauberan, co-owner of Lloyd’s Automotive, with locations on East Sprague in Spokane Valley and on the South Hill, said customers are paying between 30% to 40% more for repair s, and not all because of higher parts costs.

“Where some may have been scared away with a $2,000 repair cost in the past, now they are saying, ‘Go ahead and do it,’” Sauberan said.

At the same time, her husband has been looking for quite some time for a new pickup.

Sauberan tried to sell her personal BMW last year during the pandemic. She contacted the online sales site Carvana.com, which quoted her a price of $21,000 for the car even though Kelley Blue Book put its value at about $28,000.

“No questions asked. They didn’t even want to know the mileage,” Sauberan said. “I’ve never had a car go up in value.”

On Thursday, Adair, of Mechanics Pride, was replacing a 1999 Toyota 4Runner’s master brake cylinder, which pumps fluid throughout the vehicle’s brake lines.

“This one is shooting out fluid,” Adair said. “It’s a very expensive master brake cylinder to replace.”

Howard, who drives a 1995 Nissan, said he understands why customers are willing to spend a little more to keep their rigs running. He prides himself on never having had a car payment.

“A lot of times last year or a couple years ago, people might come in and we’d give them a list of things on a car that might cost $2,000 to get it working properly,” he said. “They may have taken it in for a trade. But now, they are fixing it a lot more often.”

While the increased likelihood of folks paying to fix older cars has not created an explosion of work, many shops have struggled to find enough mechanics to work on those cars, both Adair and Howard said.

“Even though the market is so upside down, we are still seeing roughly the same car count,” Austin said. “Our problem is workers. We need more people. Nobody seems to be applying.”

Howard said his shop, which is a different business but the same name as the shop started by his late father, had seven employees before COVID-19 hit. He had to reduce it to two and was only able to bring back two more of his former workers.

“We’ve been sticking with a four-person crew,” he said. “It’s working just fine, but we are booked out two to three weeks all the time now.

“It’s a good problem to have,” Howard continued. “But, it’s stressful for people calling around trying to get their cars fixed because everybody is booked.”

While dealing with all the normal business problems, the recent heat wave compounded issues.

“Heat kills cars,” Adair said. “With the hot weather, we always see an influx of business with breakdowns, air conditioner and coolant-system failures.”

“Honestly, some of the problems I have never experienced before because we don’t normally see temperatures that high,” he said. “We’ve had an insane amount of air conditioner business.”

Until the employee shortage works itself out, repair shops will struggle to fix cars as fast as customers prefer, Howard said.

“We all have families,” he said. “We are all putting in overtime, but we are trying to be strict about not working all of the time. There are only so many hours in the day.”