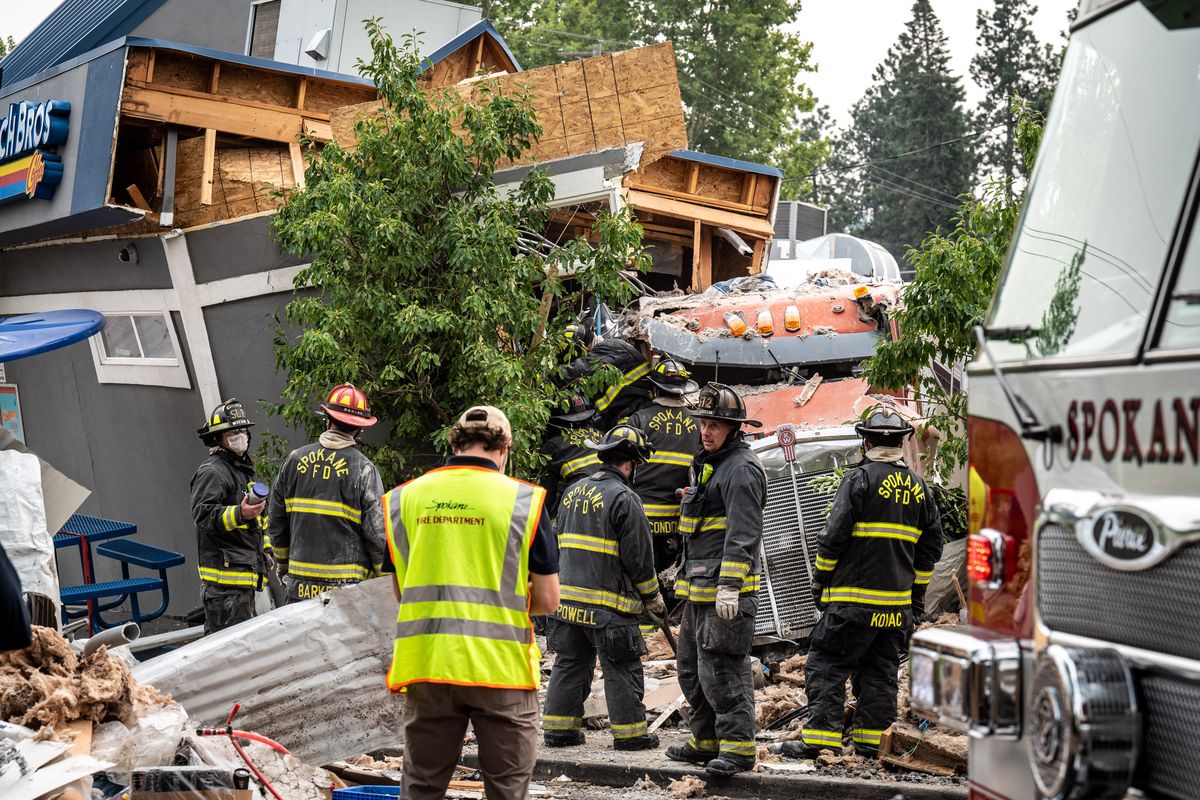 Two people were taken to a hospital Friday after a dump truck slammed into a Dutch Brothers coffee drive-thru and another business at Fourth Avenue and Freya Street, Friday, August 20, 2021. (COLIN MULVANY/THE SPOKESMAN-REVIEW)

McGavin Medrain, 48, was identified by police on Friday afternoon as the driver of the truck. He was listed as booked into the Spokane County Jail, and police said they were pursuing charges of vehicular assault against Medrain, who is from Idaho.

Thomas Sunwanmaneedang’s wife, father and 11-year-old daughter were ordering drinks at the Dutch Bros. drive-thru coffee stand when the truck barreled through a nearby insurance office and struck the stand, as well as cars waiting in the line.

“I feared for their lives,” Sunwanmaneedang said. “Once I saw the mess there, I figured there was nobody that could have survived it.”

The three passengers didn’t have any broken bones, but were shaken by the crash, which brought dozens of police and firefighters to the scene just across the street from Frances Scott Elementary. Medrain was arrested on suspicion of driving under the influence, and impairment is believed to have contributed to the crash, Officer Stephen Anderson said.

The crash at the intersection of Fourth Avenue and Freya Street was reported about 11:50 a.m. Spokane Fire Chief Brian Schaeffer said the crash involved six vehicles, and confirmed seven people were transported from the scene. Others involved, including the shop’s baristas, remained at the scene, dazed and some covered in fiberglass insulation pulverized by the impact.

Suwanmaneedang said the company that owns the dump truck had recently completed a repaving of his driveway. A call to that company was not returned Friday afternoon.

“I’m worried about my little one,” he said Friday, as his family was being treated by emergency room physicians. “It was horrific. She was scared beyond wits.”

The baristas, who declined interviews at the scene, gathered in a circle to chug undamaged energy drinks from the coffee stand shortly after the crash.

The owners of the first building struck did not respond to an email request for comment Friday. The building was empty at the time of the crash, police confirmed.

The witness, John Little, said the truck was going fast and did not appear to be braking despite having just come down the Freya hill.

The truck was not honking, nor did Little see brake lights.

Authorities closed northbound Freya to traffic for an investigation. Anderson said the road would likely be closed for a few hours.