A GRIP ON SPORTS • What is the most important single position in team sports? Is it goalkeeper in hockey and soccer? Or is it pitcher in baseball? How about basketball’s point guard? All of those are crucial to a team’s success but we’ll go with a more traditional pick: quarterback. There is no position singularly more important to success in modern sports.

• There was a time when running back was the key spot in football. And it wasn’t eons ago. But rule changes at all levels have morphed the game into one in which everyone relies on an outstanding quarterback to reach the pinnacle. We’re talking all levels, from your local Pop Warner squad to the NFL (see: Brady, Tom).

College football? The difference between poor to average, average to good, and good to great, is quarterback play. Recent examples abound all over the nation, from the premier league down South to the best of the West Coast, from Washington State (Gardner Minshew) to Clemson (Trevor Lawrence), from Ohio State (Justin Fields) to LSU (Joe Burrow). 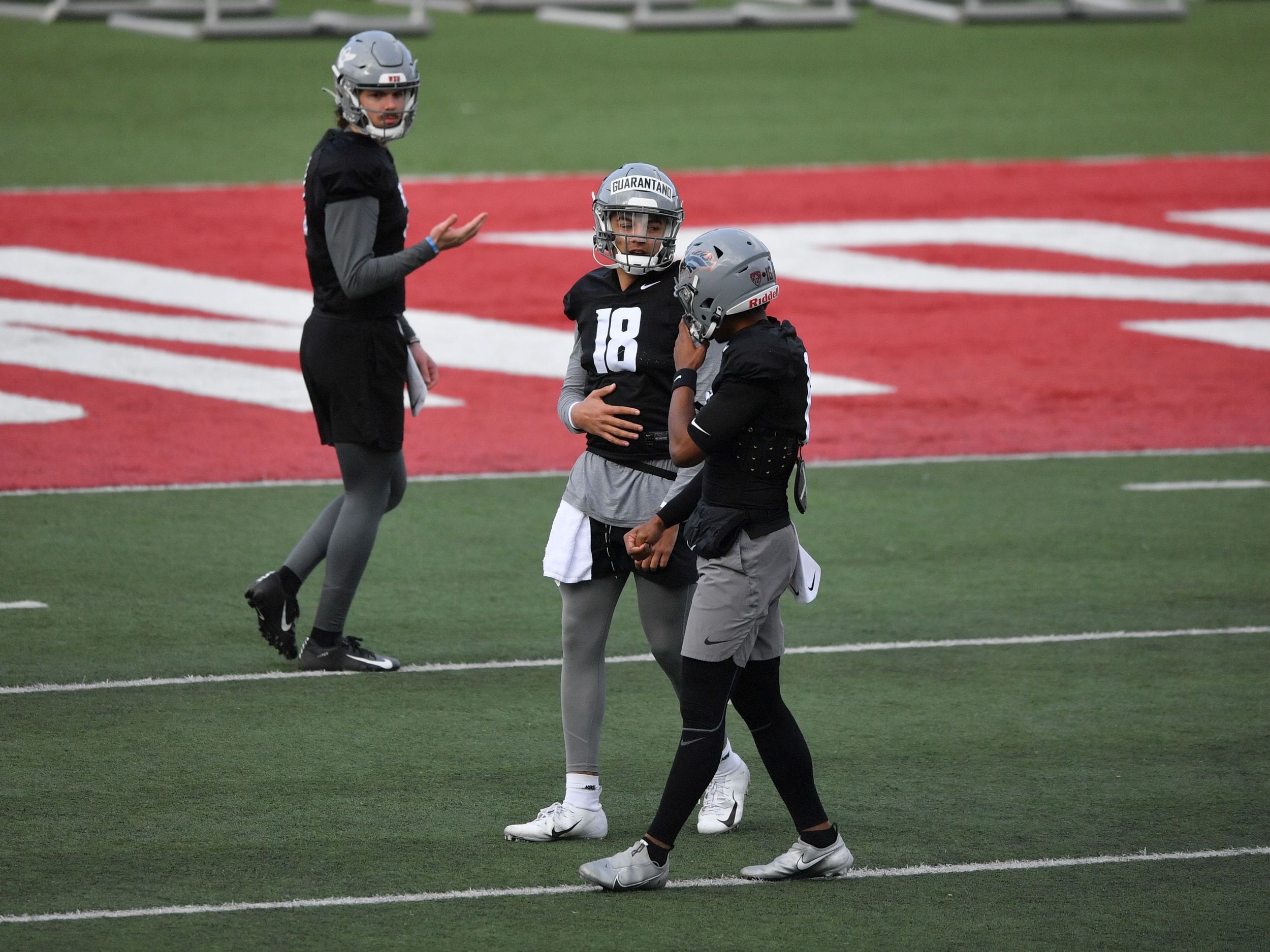 Which is why so many stories in August are about the local football team and who will start at quarterback. And the corollaries, like “what is coach X thinking?” or “can QB1 stay healthy?”

The Cougars are not immune this season. Will it be Jayden de Laura, last year’s starter, or Jarrett Guarantano, the Tennessee grad transfer, being given the first shot to lead the offense onto Gesa Field late Saturday night? Cougar Nation wants to know.

Much like his vaccine status, Nick Rolovich isn’t saying. He’ll make a decision – may already have made it – but he’s not sure he’s going to share it with the media before Saturday night. He’s also wise enough to realize as soon as the team finds out, it will get out into the public domain, possibly through a Name, Image and Likeness deal for the starter.

We’re joking about that last part but keeping secrets in this social media day-and-age is hard. Harder than ever. It can be done – no one outside the program knew about Luke Falk’s broken wrist a few years back, though many suspected – but it isn’t easy. It might just cut down on the drama if Rolovich would come out today at his 2 p.m. Zoom presser and name De Laura. Or Guarantano.

And let them lead the way through practice this week.

Reading Rolovich’s comments after he eliminated Cammon Cooper from the competition last week, we believe the choice will come down to consistency (Guarantano) versus the potential for the big play (de Laura). What is Rolovich and his staff looking for from the position?

With that in mind, we’ll make a guess and figure the freshman will be the guy Saturday night against Utah State. After all, Rolovich didn’t get where he is by playing it safe and following all the conventional coaching rules. On the field, he’s hitched his career to a non-conventional offense – the Run and Shoot. Off the field, well, you know.

Like everything else Rolovich has done recently, we expect him to roll the dice. Take chances. Go for the big play. And that includes putting the offense into de Laura’s hands.

• Call it the Grippi kiss of death – or life.

We want to remind you we delved into the Mariners’ issues yesterday and they promptly won, with Jarred Kelenic, one of our reasons for their inability to ascend higher in the standings, hitting a home run.

We also delved into the Indians’ winning streak and they promptly lost, dropping a game in the standings to the first-place AquaSox and the second-place Emeralds.

Which made us think. We could we jinx – or lift up – today? Besides de Laura, we mean.

All things considered, including our investment portfolio (such as it is), we’ll venture out of sports and let you know we think the NASDAQ is going to have a bad day. You’re welcome. 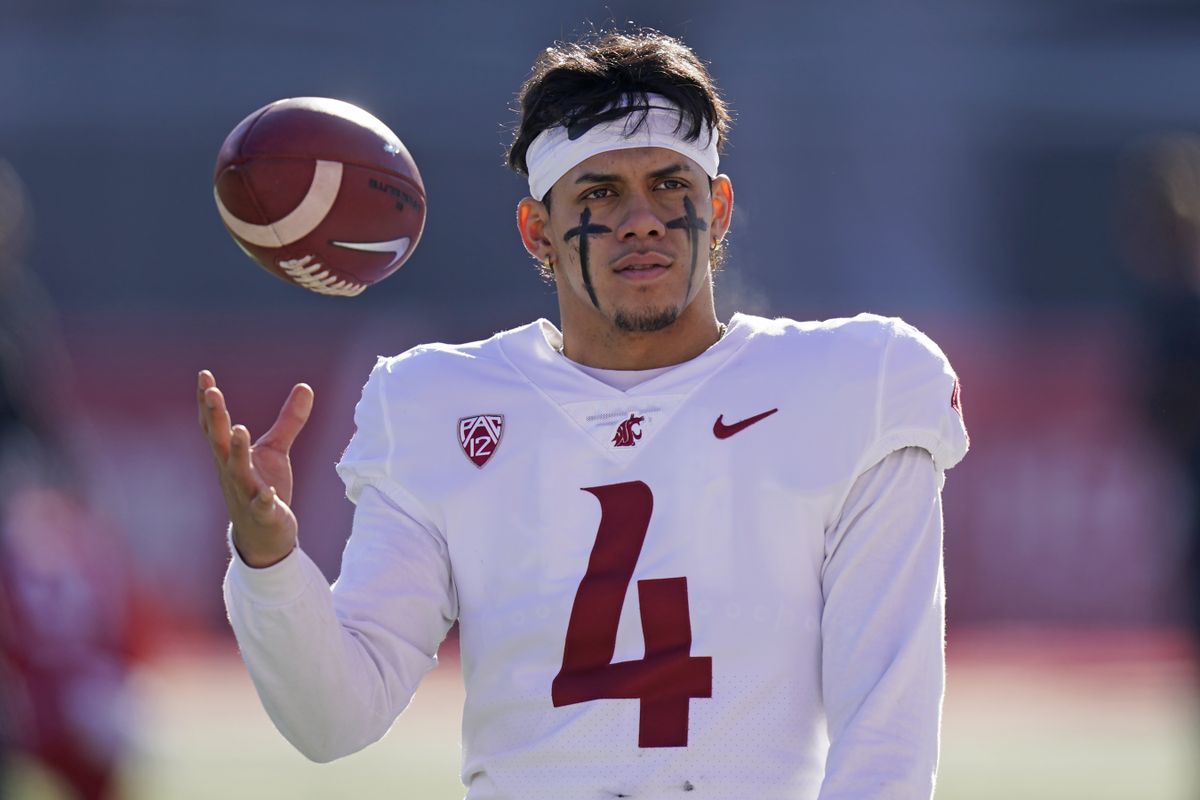 WSU: Colton Clark shares Rolovich’s thoughts on the quarterback competition as well as other spots in today’s story. … Elsewhere in the Pac-12 and college sports, Jon Wilner looks at possible bowl game destinations. He has the Cougars staying home. … Speaking of quarterbacks, both Stanford and California have featured some talented ones over the years. … USC will open its season Saturday hosting San Jose State, which already has a game under its shoulder pads. The Trojans have a pretty soft schedule which could help Clay Helton’s job status. … Oregon coach Mario Cristobal isn’t on a hot seat. But he is under a magnifying glass. … Though young, Colorado has a leader at cornerback. … Utah will be playing in a remodeled stadium with the fans not having to be vaccinated. … UCLA has the preliminary game over. Next up is LSU and the Bruins expect a bigger crowd at the Rose Bowl. (Spoiler alert: It couldn’t be much smaller.) … A lot of great college quarterbacks have come out of the Phoenix area recently. They just aren’t at Arizona State or elsewhere on the West Coast. … Arizona will need a handful of players to really step up if it wants to be successful.

Indians: As we mentioned above, Spokane fell in Everett last night. Dave Nichols has more than just the final score, which happened to be 10-4, in this story.

Shock: Spokane’s season is over. We predict Arizona will win the IFL title. The Rattlers opened the playoffs with a win.

Chiefs: Spokane added depth on defense last week with the addition of Ethan Overman. That news leads off our local briefs column for the week. 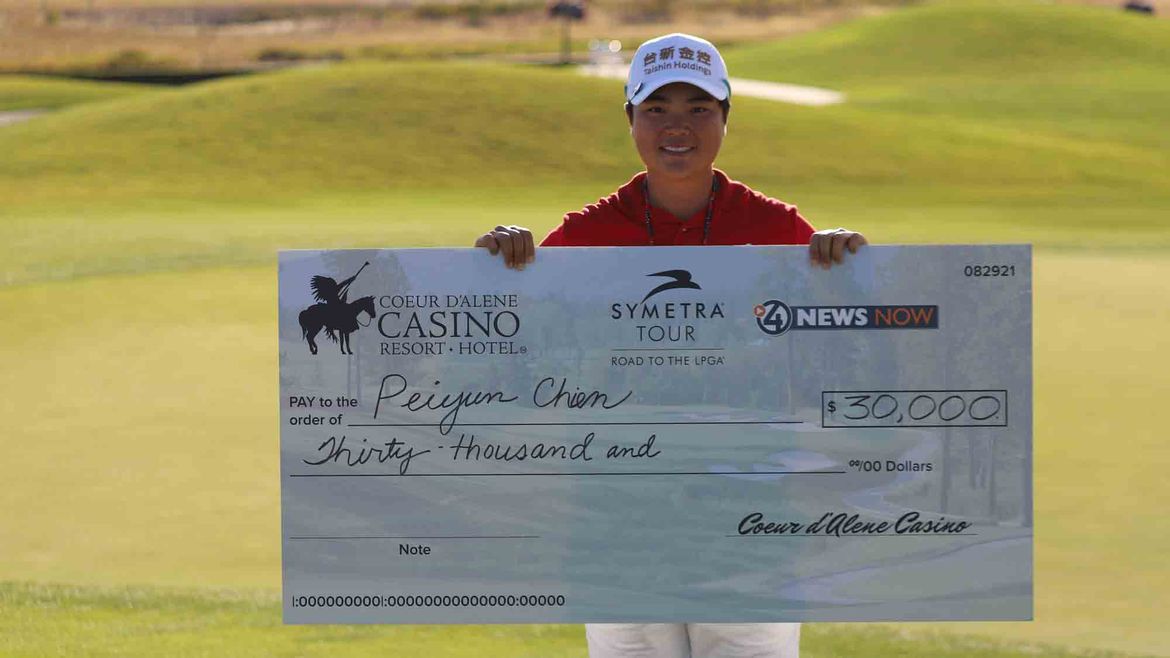 Golf: The Circling Raven Championship came down to the wire, with Peiyun Chien holding on for the Symetra Tour event title – not to mention an oversized check. Jim Meehan was at Circling Raven and has this coverage.

Mariners: We were chatting about our column from yesterday as Kelenic stepped into the batter’s box Sunday in the sixth inning and the game tied at 1. He untied it with a long fly ball to right. And the M’s went on to win 4-3 and gain a game in the wild card race. … Kyle Seager hit the biggest home run, as he’s done many times in his career. But the slugger of the weekend was the Royals’ Salvador Perez. … Kyle Lewis should begin a rehab assignment this week. 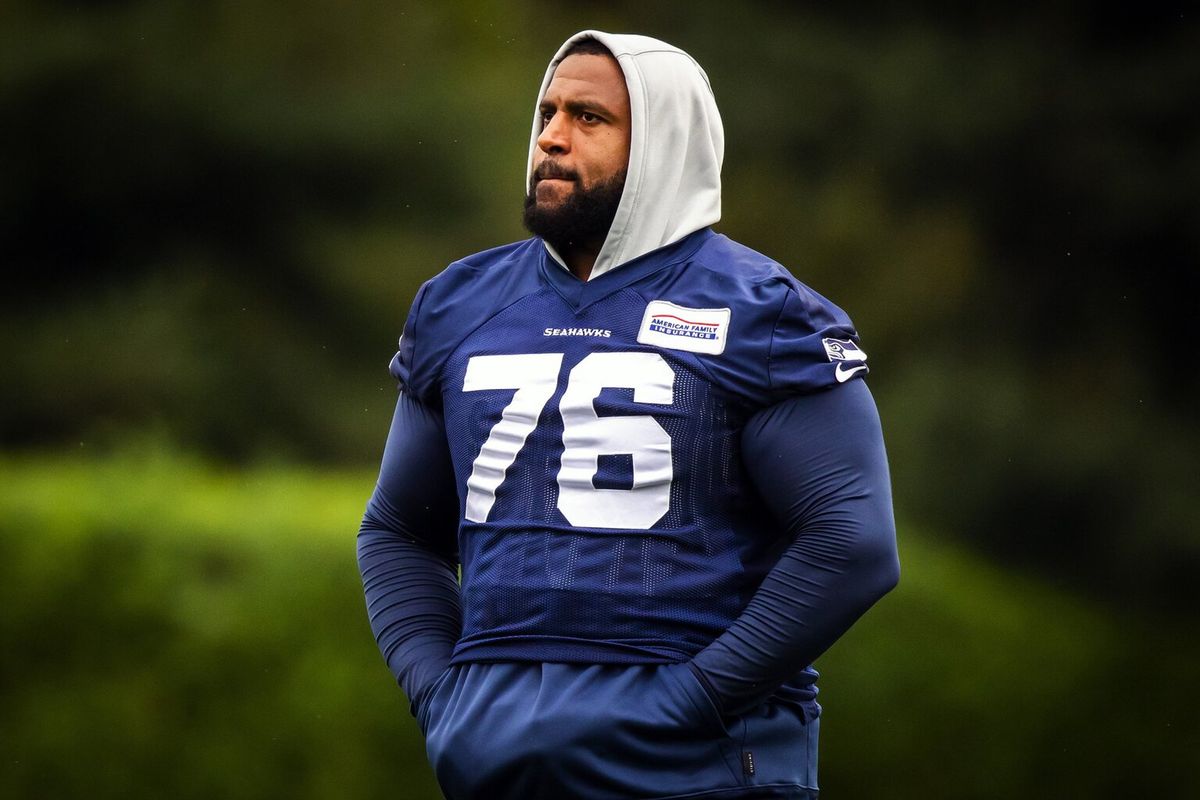 Seahawks: We linked this yesterday but we have Bob Condotta’s roster projection this morning in the S-R as well. … Here’s another projection, which is almost exactly the same. … Take the over when it comes to Seattle’s win total.

Storm: For some reason Seattle is in a post-Olympic slump. The worst defeat hit yesterday, with the Sky blowing them out at home 107-75.

Sounders: There was a Seattle/Portland party at Lumen Field on Sunday. The Reign enjoyed it while setting a league record in attendance. So, surprisingly, did the Timbers. The Sounders fell 2-0.

Kraken: Expansion drafts are not easy on the players, whether they have to move or not.

• These are the final couple days of August. I’m not ready for September to start. I want more summer. It’s my second-favorite season, trailing spring by a decent margin, but still a hair ahead of autumn. If I didn’t have to think of what immediately follows fall, I would enjoy the season more. With that in mind, don’t surprised if this time next year I’m giddy. There is a great chance this will be the final winter I’ll be forced to shovel snow and scrape windshields. If you are lucky enough to already be able to fly south, what’s that like? Will we enjoy it? I sure hope so. Until later …