A GRIP ON SPORTS • Eastern Washington’s football season is over. Done in once again by woes on the defensive side of the ball. On special teams. And a Montana team desperate for revenge.

• It’s not always the losing team’s mistakes that cause a loss. Sometimes the winning team forces the issue to such a degree there is no other outcome. Deciding what happened last night in Missoula is a debate that will go on for longer than it takes to finish this column. A lot longer. But, as you ponder the scales of justice (or injustice if you an Eagle fan), takes these items into account: 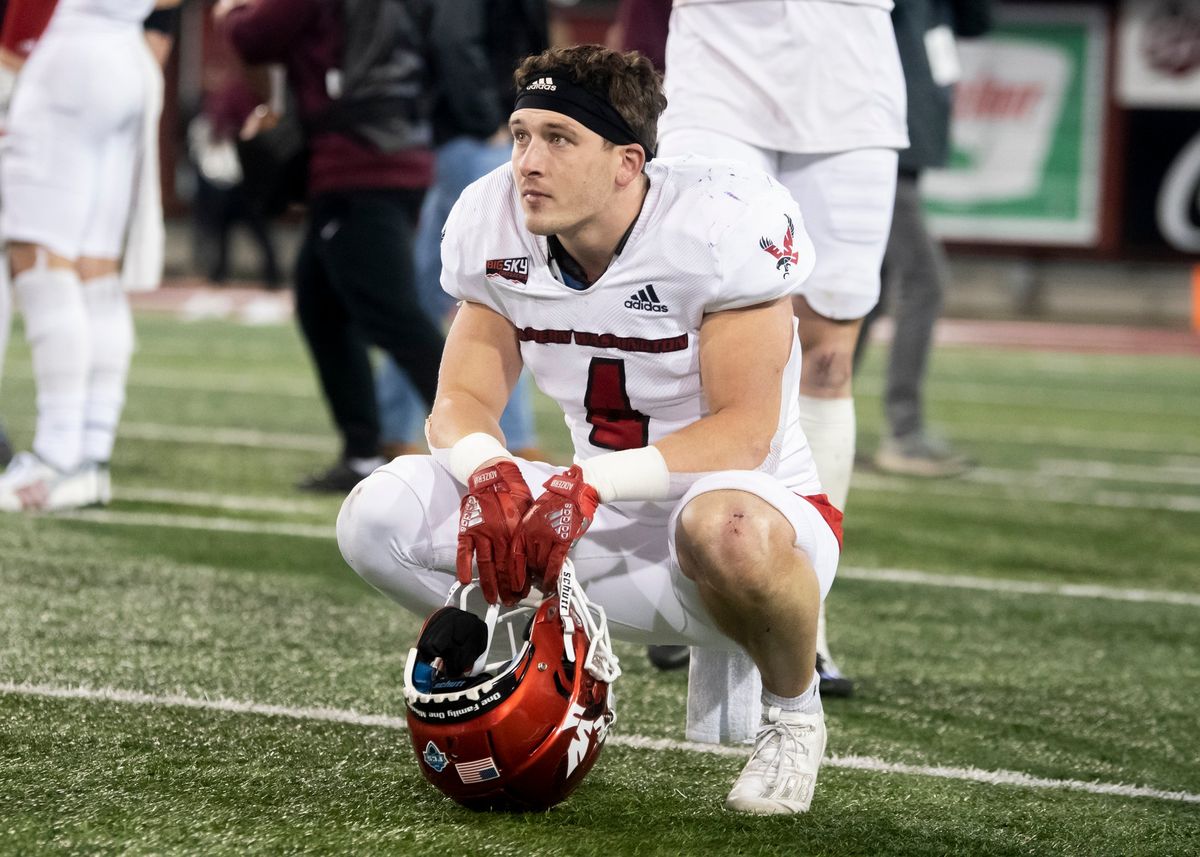 – Montana’s defense delivered a series of crushing blows throughout the game. In fact, the Griz flew around without pause all night, forcing Eastern to abandon the running game and throw the ball 81 times. Though EWU finished with 608 yards of total offense, and won the time of possession battle by more than 11 minutes, after a second-quarter blocked punt it never felt as if it controlled the game.

– The Eagles gave up the ball three times, once with an Eric Barriere interception, once on an awful fumble and once on the momentum-changing punt block. Montana? It didn’t have a turnover.

– Montana had scoring drives of 17, 23, 8, and 5 yards. Not all ended in touchdowns, but short-field scores are something not even Eastern’s prolific offense can always overcome. And those numbers don’t even include the 55-yard interception return for a touchdown that sealed the game. 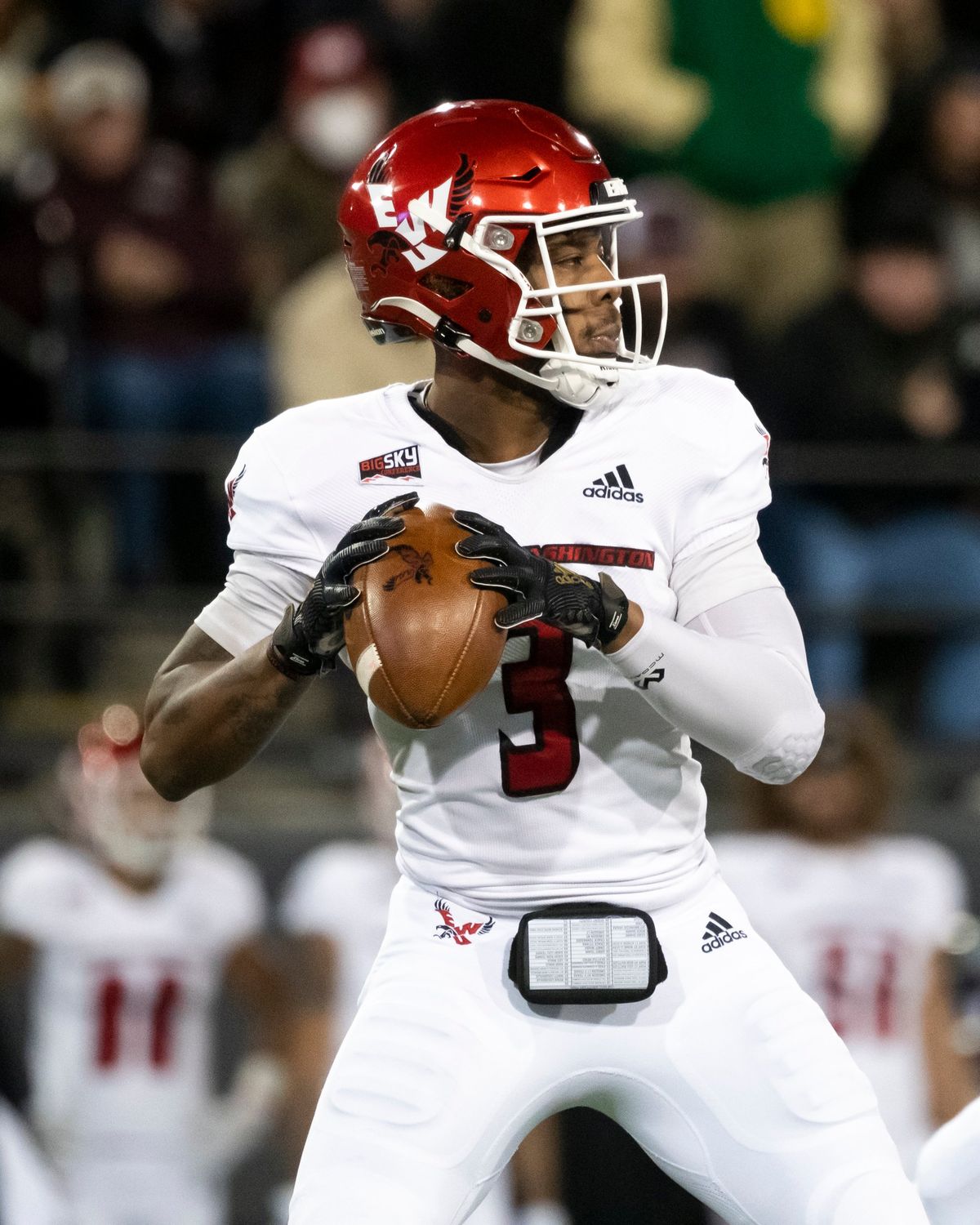 We’ve mentioned this before, but the outcome seemed ordained a couple weeks ago. That’s when the FCS playoff committee denied the Eagles a first-round bye and penciled them in for a road rematch, despite Eastern having finished tied with the Griz in the conference standings and having won the first meeting this season between the schools. Having the second-round game played on Friday night – one of two such games in the FCS playoffs – cost Eastern another day of prep as well.

But all of that could have been avoided had the Eagles won one of the two home games they lost: against Montana State, which was somewhat understandable, and against Weber State, which, considering the Wildcats’ season, was not. Coaches constantly tell their teams not to overlook opponents, their teams constantly refuse to listen and consequences happen. In EWU’s case, the consequences were playing last week against Northern Iowa and playing this week on the road on short rest.

• We may find out tonight how much poise Gonzaga’s younger players have. Whether they can stand up when the opponent just keeps coming at you.

That’s Alabama’s method of operation. The Tide hasn’t fine-tuned it yet this season, not to the extent it did last year, but there is little doubt coach Nate Oats hopes tonight’s Battle in Seattle will be where his newcomers begin to catch on.

And Mark Few hopes they don’t.

Oats’ offensive philosophy is simple. Shoot lots of 3-pointers. Lots of layups. And more of them than your opponent. That’s where his defensive philosophy comes in. Force turnovers. Get enough of them and your offensive efficiency will overcome whatever easy buckets you give up.

But Gonzaga thrives on offensive efficiency itself. Usually. What happens, however, if the Zags’ get sped up beyond their usual RPMs? Could the engine overheat and break down? That’s what Oats and the Tide hope happens tonight. 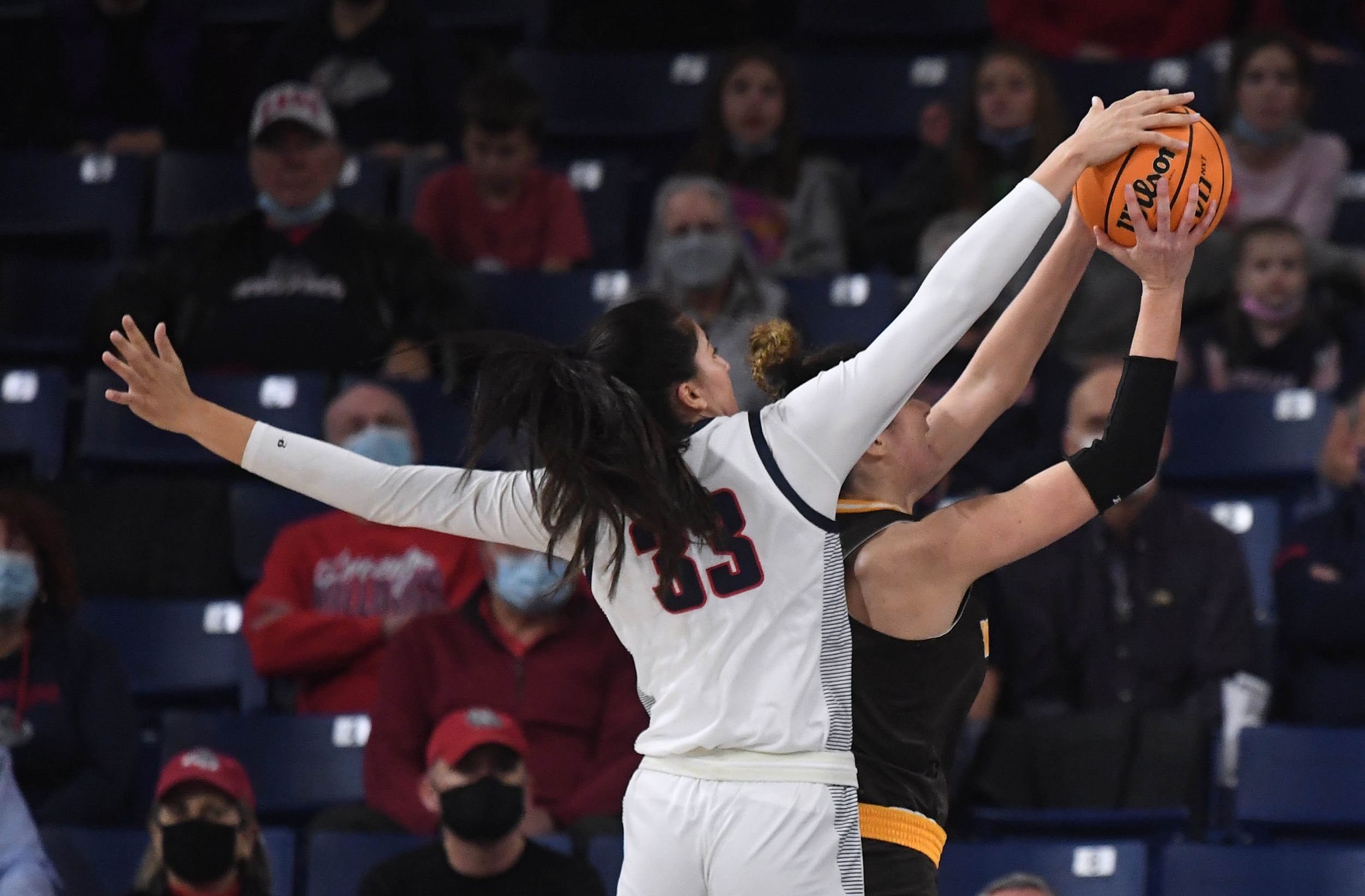 Gonzaga: Before we head across the mountains, the women played last night in the Kennel. They held off Wyoming, 54-47. Jim Allen has the game story, Colin Mulvany the photographs. The Bulldogs weren’t at their best but a win is a win. … As for tonight’s Battle in Seattle, Theo Lawson has this preview and the key matchup. … Around the WCC, after a even battle, BYU was able to edge defending NCAA champion Santa Clara and move into Monday’s soccer championship. The Cougars will face Florida State. 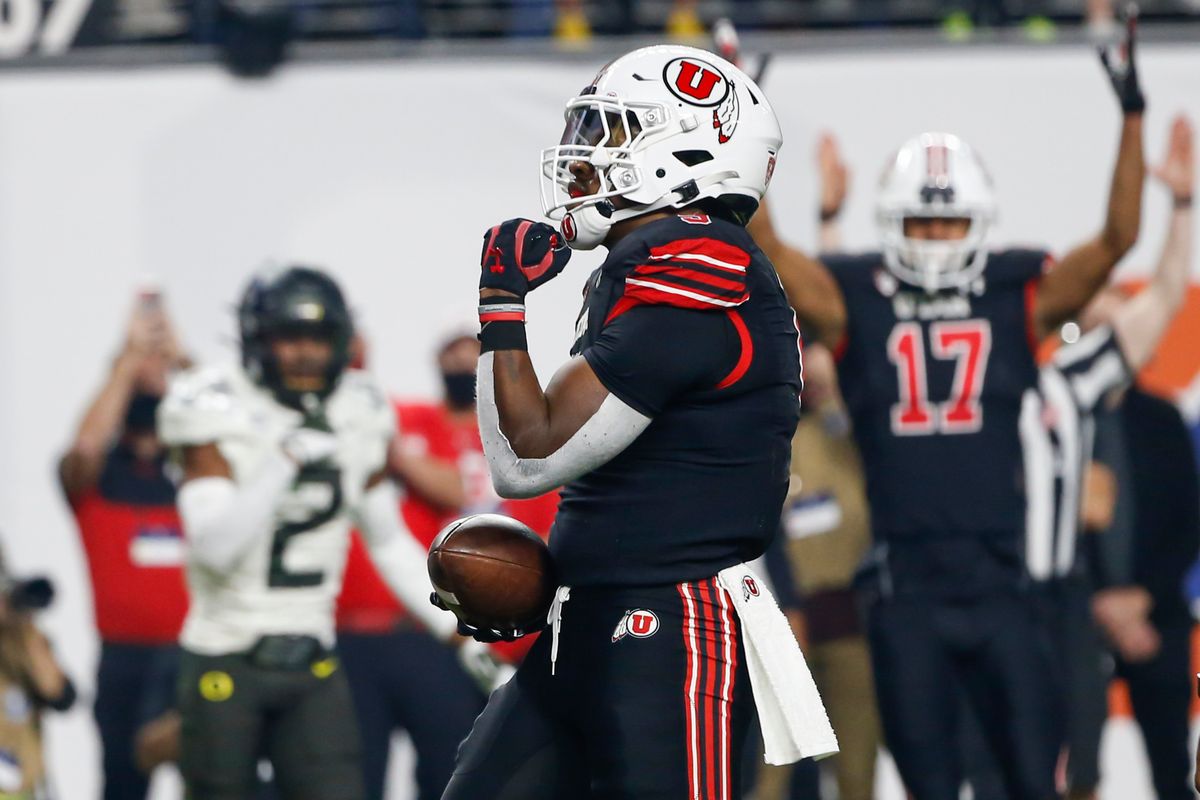 WSU: The volleyball season ended in Waco, Texas yesterday, as sixth-seeded Baylor swept the Cougars from the NCAA tournament. Washington State finished 20-12. … Elsewhere in the Pac-12 and college football, Utah showed its regular season rout of Oregon was no fluke, doing the same thing last night in Las Vegas. The 38-10 victory earned Kyle Whittingham and the Utes their first Rose Bowl berth. And it capped a season from hell no other program would want to undergo. … With that outcome, the bowl berths are pretty much set. It looks as if Washington State is going to spend the holidays in El Paso again. … The commissioner and the conference’s director of football spoke last night. We agree with the former’s comments and laugh at those of the latter. … Miami’s pursuit of Mario Cristobal isn’t a laughing matter, not with all the history between the school and Oregon’s coach. … There is one other football game left, tonight’s COVID-19 postponed matchup at California between the Bears and USC. Neither team is going bowling. … New UW football coach Kalen DeBoer has a connection to Edgar Martinez. … New Arizona defensive coordinator Johnny Nansen is happy to be in Tucson. … In basketball news, Washington’s COVID-19 issues have cost them a loss. The Huskies’ home game Sunday against fifth-ranked UCLA is off and the Bruins have been awarded a forfeit win. UW and Gonzaga are scheduled to meet next Sunday in Spokane. … The Huskies first coronavirus-caused postponement, against Arizona, has been rescheduled for late January. … Colorado has an addition to a future schedule and to its current roster. … USC’s confidence is growing. 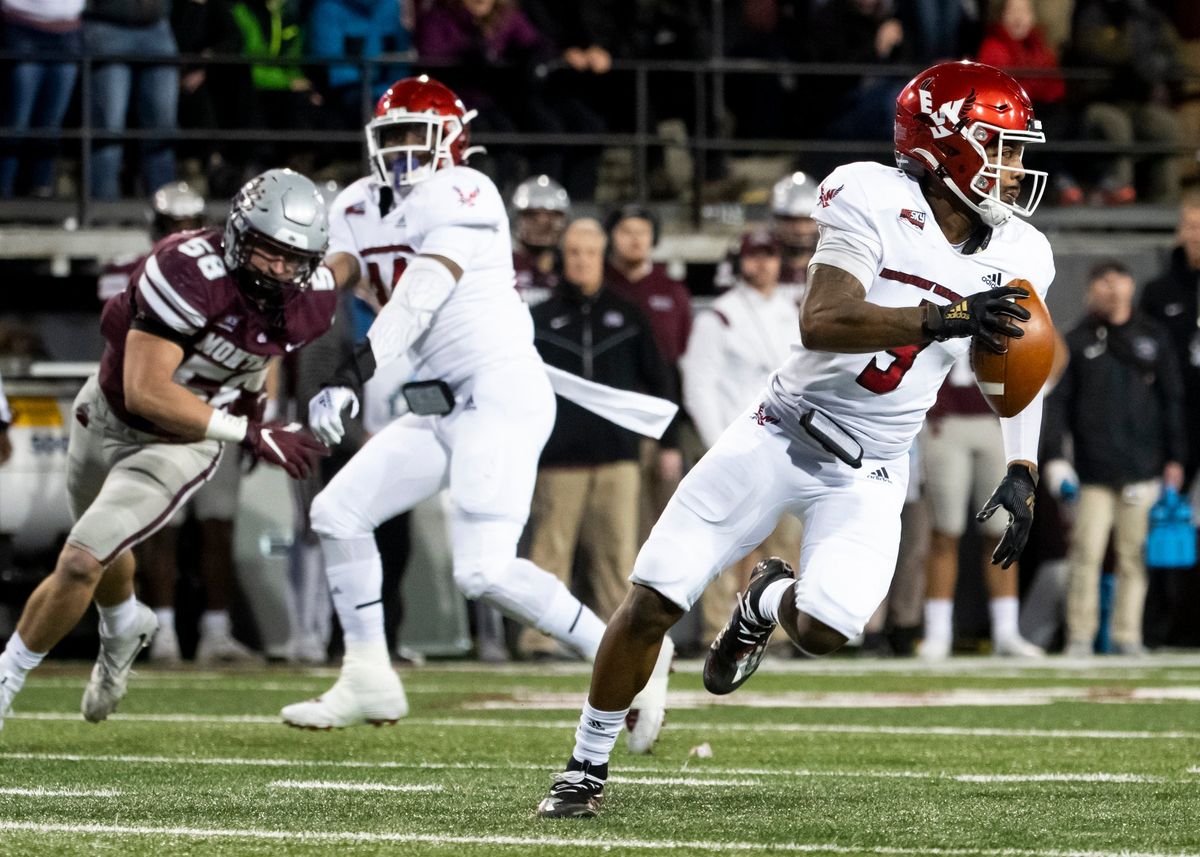 EWU: The S-R covered the season-ending loss in Missoula not only with Dan Thompson’s game story but with a John Blanchette column as well. … The Missoulian has coverage of Montana’s win as well. … Around the Big Sky, Montana State hosts UT-Martin today and the Bobcats will do it without their former starting quarterback. … Sacramento State hosts South Dakota State. … Northern Colorado’s basketball team has posted some interesting numbers.

Preps: There were basketball games last night, of course, and Dave Nichols has the roundup.

Chiefs: Spokane kept peppering the Prince George goal last night but the Chiefs couldn’t cash in enough to avoid a 4-2 defeat. Kevin Dudley was in the Arena and has this game story.

Seahawks: With the 49ers coming to town, Seattle can still try to figure some things out. Not for this season. That’s basically over. But for next. … Some of the questions have to do with the quarterback’s play. … Adrian Peterson will be the latest running back plugged into an offense needing rushing help.

Sounders: The offseason is going to test Garth Lagerway’s ability to patch the Seattle roster.

• We won’t be watching the Gonzaga game live tonight (5 p.m., ESPN2), so no TV Take afterward. We have other basketball-related responsibilities tonight. In fact, it’s a busy day that way. Which brings a smile to our face. Until later …