A GRIP ON SPORTS • Why do college conferences hand out awards? No, it’s not a trick question. We understand the idea of honoring achievement, sure, but awards usually engender more debate than celebration. Wait. We have an answer to our question.

• Awards are truly about celebrating accomplishments. That’s their core mission. Controversy is just a byproduct. A happy byproduct. After all, wasn’t it P.T. Barnum who said any publicity is good publicity? If it wasn’t, it should have been. Whoever said it, in the world of college athletics, they were right.

Sports is entertainment. At all levels. Which means college sports is competing with other forms of entertainment for eyeballs, ear buds and an entrée into your bank account. 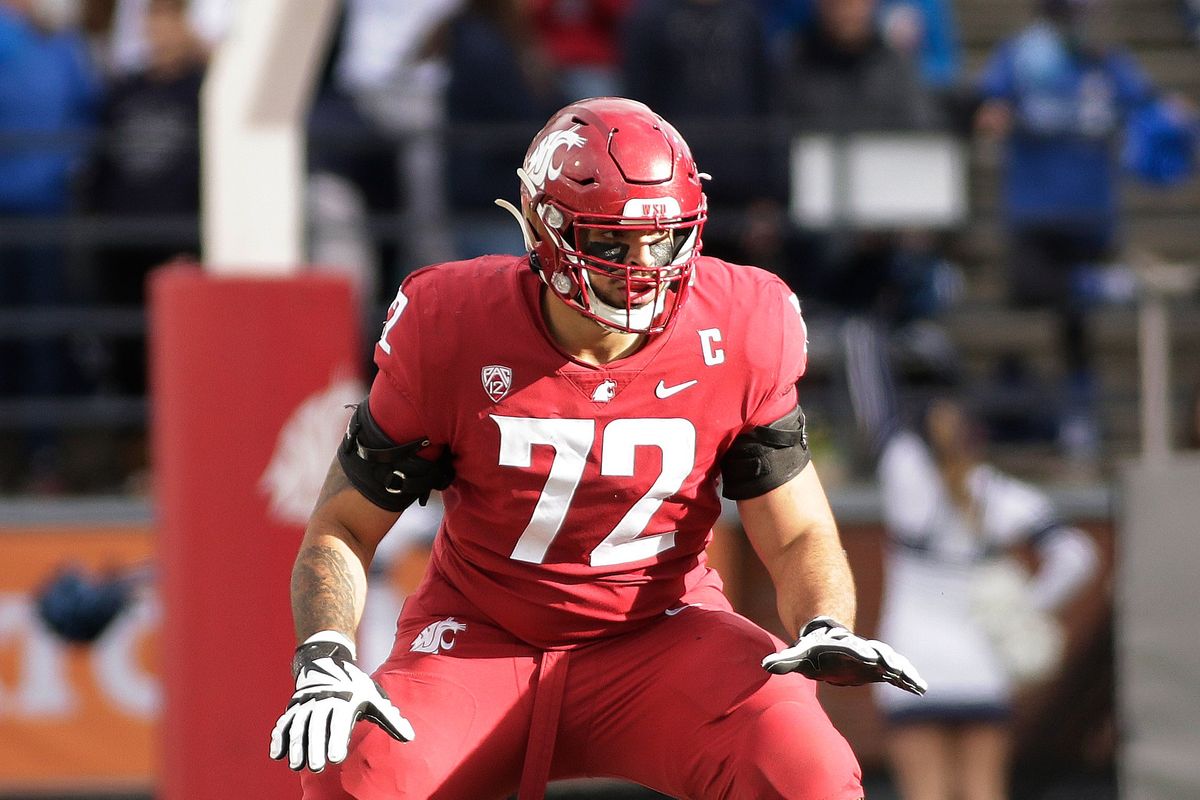 Controversy keeps sports in the public consciousness even when no games are being played. Like this week in Pac-12 football.

Washington State quarterback Jayden de Laura was named the conference’s freshman offensive player of the year Tuesday. Good for him. He deserved it. But did he deserve more? An argument can be made he was the Pac-12’s best quarterback, especially in conference play. Statistically, he was the conference’s top passer and we all know statistics don’t lie. But he wasn’t named to the first (Cameron Rising of champion Utah) or second (Dorian Thompson-Robinson of UCLA) team.

Which means America’s favorite way to argue these days – Twitter – was filled with righteous indignation about this perceived travesty. (Remember, when arguing on any form of social media, “travesty” is the default setting.) In this case, the Twitter angels declared, de Laura was robbed.

As were his two favorite targets, Calvin Jackson Jr. and Travell Harris.

After all, Jackson and Harris finished second and third in the conference in receiving yards. And they were delegated to the second team as well, behind the Pac-12’s offensive player of the year, Drake London, and the touchdown catch leader, Kyle Phillips. That those two play for USC and UCLA, respectively, didn’t fuel the conspiracy theorists at all. 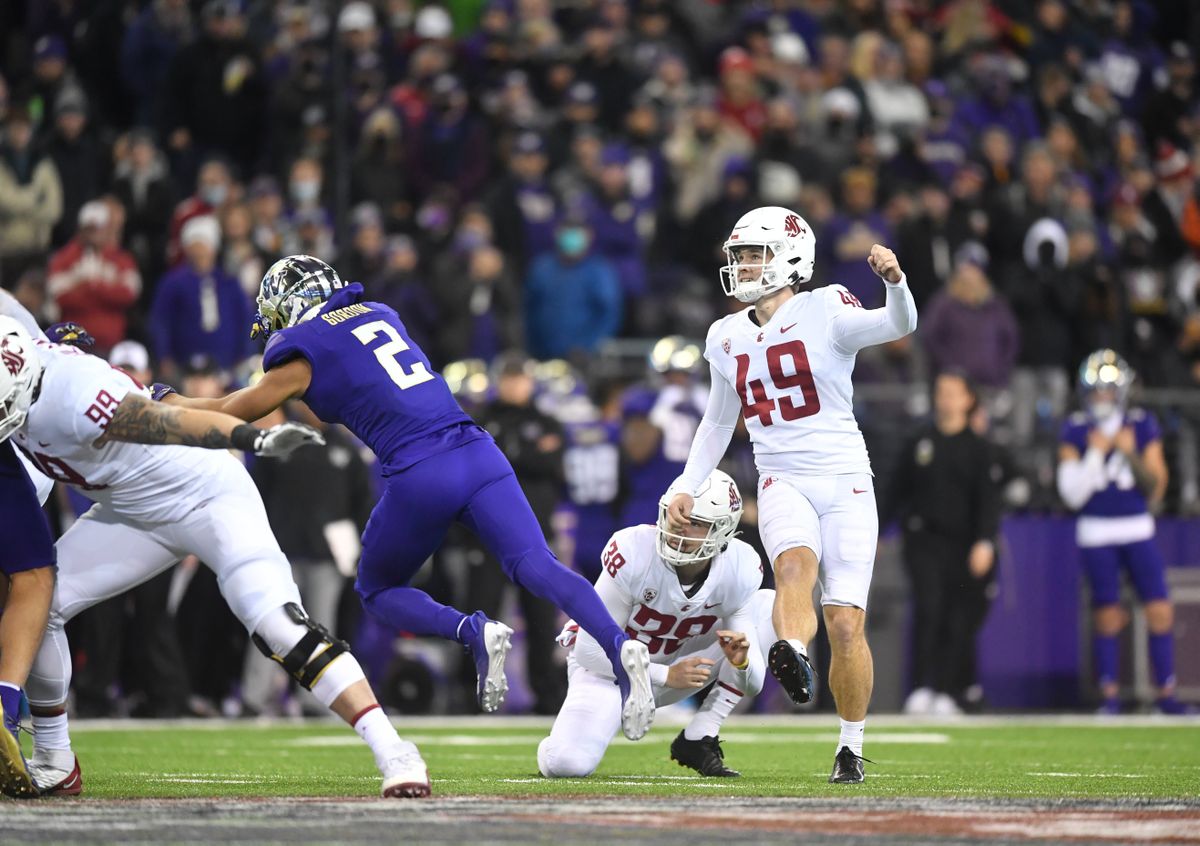 It’s all about respect and the lack of it, sure, but it also is something to chew over at work with other Cougs and to hold over that Husky fan in accounting. You know who I mean. The jerk who refused to allow you to expense your October trip to Pullman.

Anyhow, controversy isn’t bad. Celebrating Abe Lucas, Ron Stone Jr. and Dean Janikowski being first-team selections isn’t nearly as much fun as complaining about perceived slights. Especially if you’re not exactly sure which position Janikowski plays. Or Lucas for that matter.

The past 24 hours wouldn’t have been as interesting if every WSU player with a decent case had been a first-team selection. Though, if that had been the outcome, then there is always to big awards to yell about.

How the heck did a guy who only played half the season win the offensive player of the year award anyway? Oh, right. He played that half season for the Trojans. By rule they have to win at least one of the major awards. 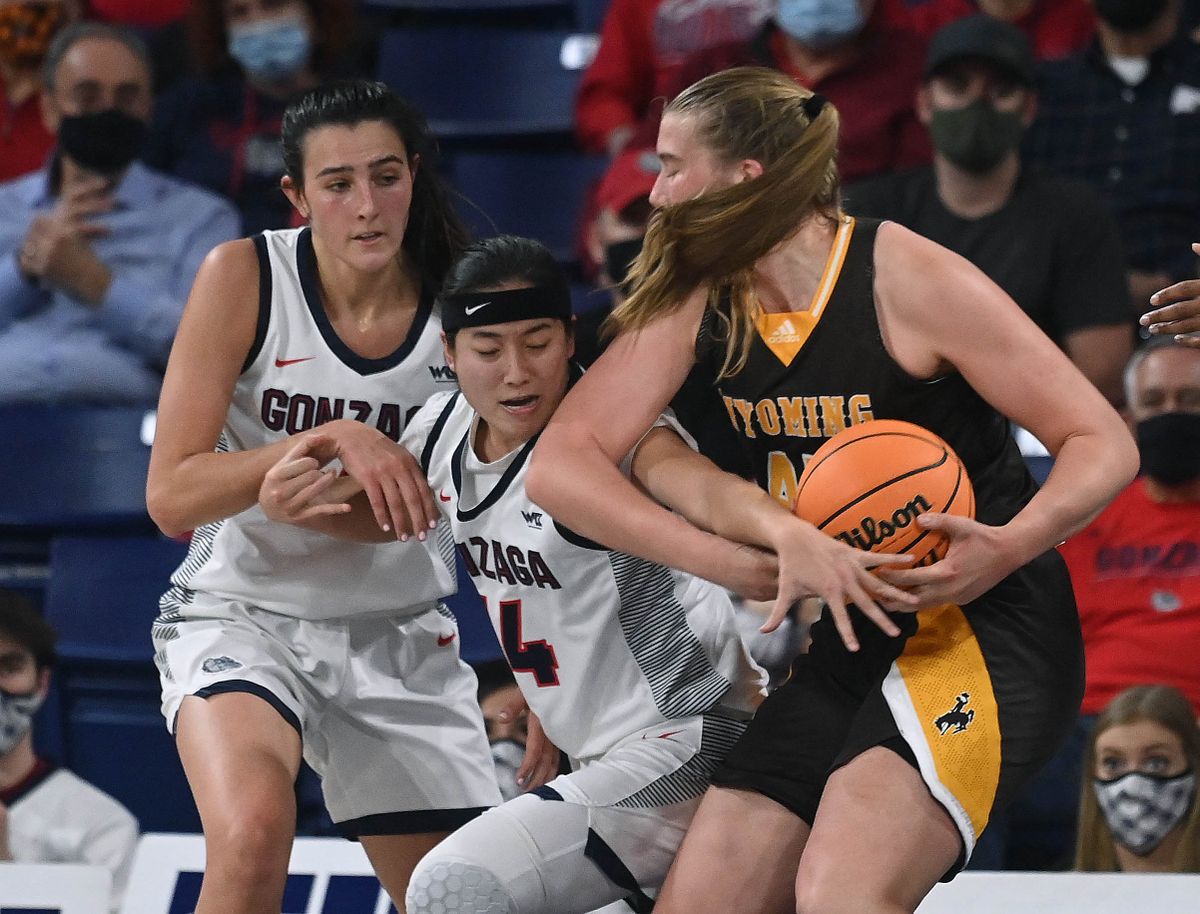 Gonzaga: We’ve seen this ending before. Well, Mark Few has. Jim Meehan has this story on the way the Zags have finished their two losses, a way that has Few disappointed. … Tonight’s Inland Northwest showdown in the Kennel could pay dividends down the road for either women’s basketball team that wins. Jim Allen has this preview of Washington State’s visit. … Chet Holmgren is No. 3. And that’s not bad. … Around the WCC, Santa Clara picked up win over Mount Saint Mary’s. … Injuries up front has forced BYU to revamp how it plays on both sides of the ball. 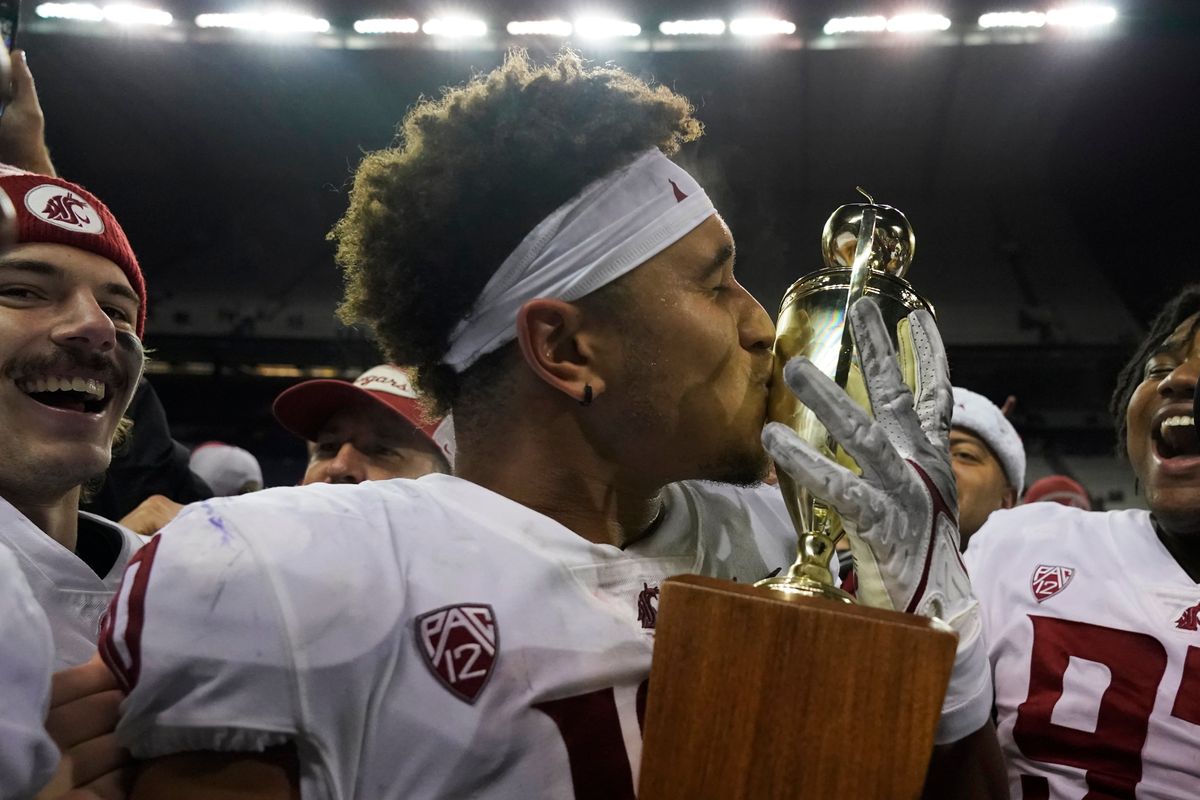 WSU: We blathered about the conference awards above. Sarcasm aside, de Laura did have a good argument, especially when compared to Thompson-Robinson. Colton Clark lays it out while also looking at all the honors in this story. … Being it is early December, however, Colton can’t stop there. He also has to preview the upcoming week in hoops. The Cougars have some interesting games ahead, including tonight at home against undefeated Weber State. … Elsewhere in the Pac-12 and college football, with the conference handing out its awards and honors yesterday, we can pass along stories related to such from most every school. There’s Washington, Oregon and Oregon State. Colorado and Utah, with the Utes having more than one. There are the Los Angeles schools, UCLA and USC, celebrating their success. And Arizona and Arizona State had some honorees as well. … Jon Wilner delves into the coaching situations around the conference. Who is next up for Oregon? … The Ducks are losing their kicker. … Washington needs to shore up the quarterback depth. … Arizona will be losing another assistant from the defensive side of the ball. … Arizona State could be losing its offensive coordinator. … A mea culpa? Yep, at least as far as Utah’s quarterbacking situation is concerned. … In basketball news, USC stayed undefeated, winning at home. … Shorthanded Utah is doing OK, all things considered. … Wyoming is undefeated and unranked. But they have a chance to make an impression tonight in Tucson against No. 11 Arizona. … Wilner has his power ratings in the Mercury News. 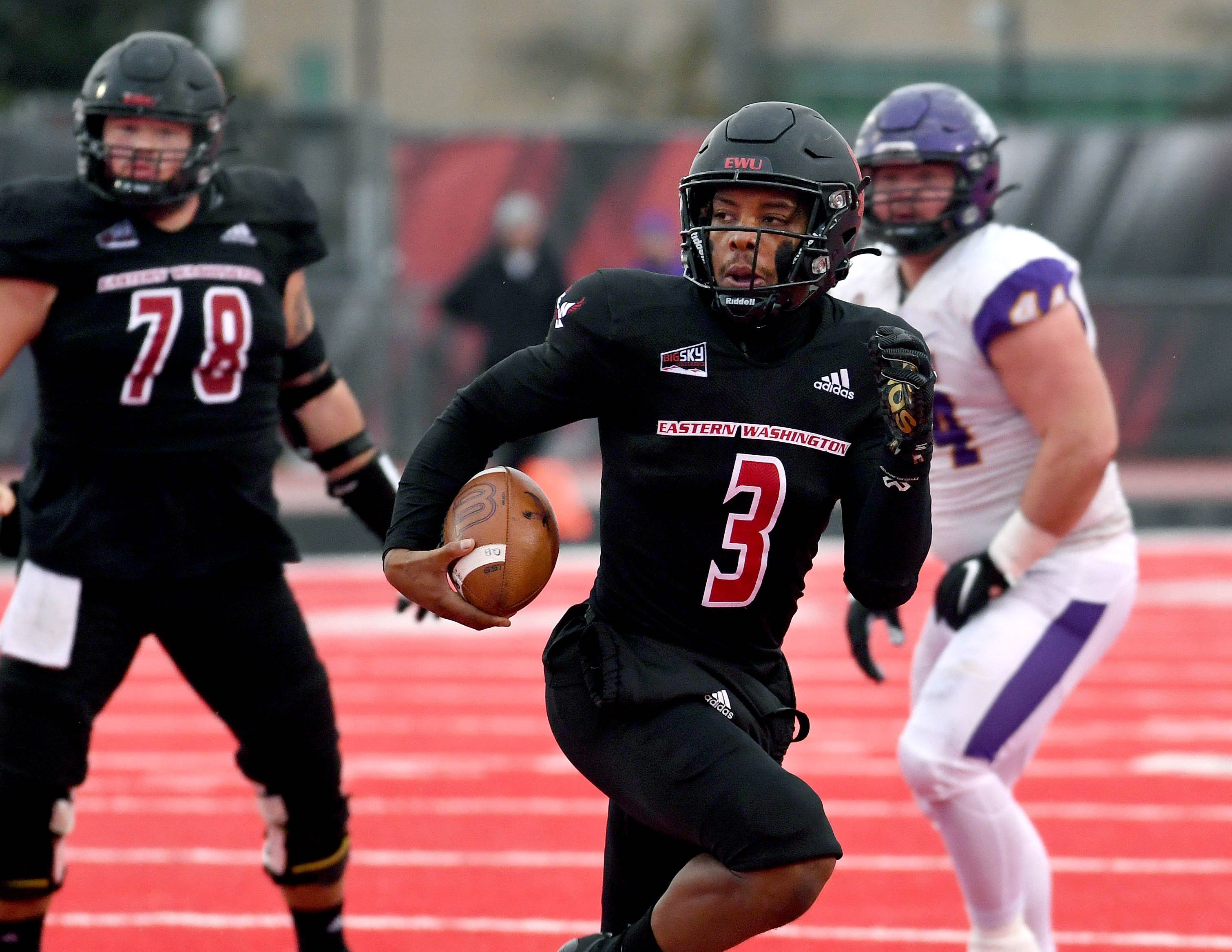 EWU: Will this be his year? Will this be the year Eric Barriere wins the Walter Payton Award? He’s a finalist again. Dan Thompson has all the details in this story. … The women hit a school-record 18 3-point shots Tuesday night in a 102-61 rout of visiting Multnomah. … The men’s team heads to Colorado. … Around the Big Sky, Northern Colorado won its third consecutive game. … Air Force will bring a seven-game winning streak into Missoula when it visits tonight. … Montana State finally played at home and won handily. … In football news, the Bobcats want even more from their freshman quarterback. … James Madison’s coach admires Montana.

Idaho: Football Scoop is reporting the Vandals have a leader in their search for their next head coach. According to the on-line site, the next coach will be Montana assistant head coach Brent Pease, a Moscow native and football lifer.

Whitworth: For a while in the past decade, Whitman was Whitworth’s top rival for Northwest Conference basketball supremacy. Not so sure that’s the case anymore. The Pirates rolled 82-71 last night in the Fieldhouse.

Preps: Tuesday night was a typical high school basketball night in the area. Dave Nichols has this roundup of all the action.

Seahawks: Are the Hawks’ dead? Not yet. At least not mathematically. … Jamal Adams’ season is over. He’s having surgery. … Up next is the struggling Houston Texans.

• I always worry when I try to be sarcastic. Not that I’ll offend anyone. I do that on a daily – hourly? – basis. Nope. I worry the sarcasm will be too veiled and people will believe I really think such things. Do I think awards are important? Sure. I still can’t believe I was third team All-Del Rey League my senior year, even though the first-team catcher was an eighth-round MLB draft pick and the second-team guy went on to play football at Stanford. I was robbed. And I have the tweets to prove it. Until later …