Colorful tents covered the sidewalk in front of Spokane City Hall during a Friday protest regarding the need for more homeless shelter beds as the weather turns colder.

“We are having a peaceful protest to bring awareness to the fact that we have zero low-barrier beds available for people that are experiencing homelessness,” said Julie Garcia of Jewels Helping Hands.

Shivering with a light jacket in windy 37-degree weather, Chris Roofener ate an Arby’s sandwich and chatted with a man he hopes will become a friend.

Roofener is an Army veteran who has lived on the streets for “many years.” He came to Spokane last week from Nashville, Tenn., and has been staying in a hotel for a few days while looking for work and help.

He arrived at the protest Friday morning hoping to show his support for more shelter beds and find people to help him. 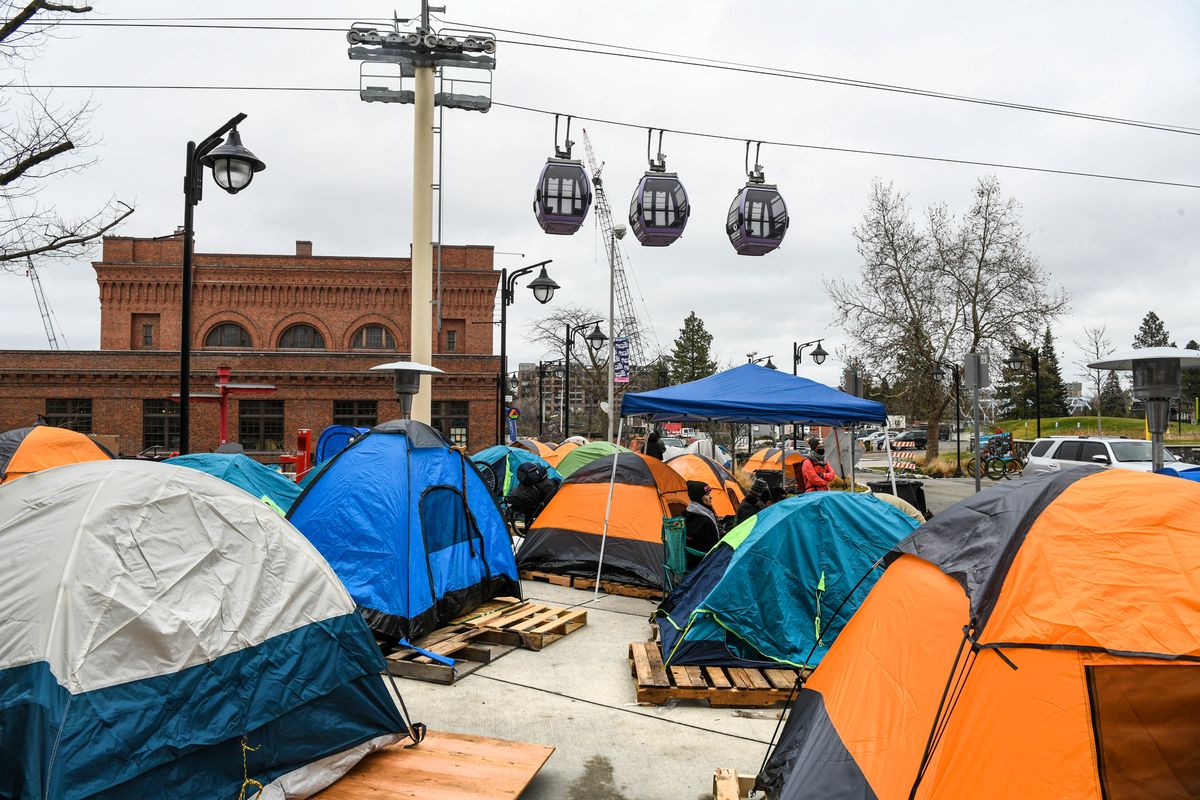 The Numerica SkyRide passes over the camping tents pitched in the shadow of Spokane City Hall as part of a protest to gain more beds for the homeless, Friday, Dec. 10, 2021. (DAN PELLE/THE SPOKESMAN-REVIEW)

At the front of the group of tents, Garcia stood behind a sign detailing just how few low-barrier shelter beds are available in Spokane. Low-barrier refers to shelters’ willingness to accept guests regardless of sobriety.

House of Charity is on lockdown due to a suspected norovirus outbreak. The Cannon Street Warming Center was full Thursday night and all 20 hotel vouchers given out by the city were taken, Garcia said.

There were 52 low barrier beds available scattered throughout the system Thursday night, said Brian Coddington, a city spokesperson. Wednesday there were 78 beds available.

“What we’re asking the city is could they provide something?” Garcia said. “These guys have nowhere to safely exist, everywhere they go it’s criminalized, just sitting down somewhere.”

Even a designated area for people to camp where service providers could offer food, warm clothing, security, and hygiene products would help, she said.

The city has taken a different approach to shelter capacity this year, which historically saw an increased need in the colder winter months, Coddington said. Truth Ministries won a year long contract in August to provide additional beds at no cost, Coddington noted. A young adult shelter also opened early this month providing 44 beds for people ages 18 to 24, which the city hopes will free up beds at other shelters, Coddington said.

The city has yet to decide if it will force the camp in front of city hall to move, Coddington said.

“We would prefer that people who want to help those that are experiencing homelessness direct them to a shelter,” Coddington said.

Garcia plans to keep the tent city up until city leaders provide more support or force them to move, she said. There are lots of federal funds available to help shelter people experiencing homelessness that the city didn’t even apply for, Garcia said.

“They’re very supportive and they want nothing but to see you get out of the situation you’re in,” Shelton said.

Shelton has been living in an Oxford House for the last five months and volunteering his time to help those still living on the streets.

“Giving back is one of the major things for me,” Shelton said. “And if these people didn’t do what I’m doing now for me, I’d still be out there and facing dying of the cold or just you know all of it.”

He remembers being scared that someone would hurt him or steal his stuff while he was homeless. That fear fueled his addiction, Shelton said.

“It’s just really cold and people are dying and everyone should have a safe place to go,” Shelton said.

Staying in a low barrier shelter gave Shelton a chance to see how his life could improve if he got sober, but many people in Spokane right now don’t have that chance with shelters full, he said.

“It kind of gives them a chance to see … you want these nice things in life like this is what kind of needs to be done, you’ve got to follow these rules,” Shelton said. “And a lot of people like me gave up the drugs for a place to lay my head and food and stuff like that.”