A few years ago, Matthew Petro was flying KC-135 tankers out of Fairchild Air Force Base.

Today, the retired lieutenant colonel seldom climbs higher than his second-floor classroom at Linwood Elementary School, where his personal refueling station is a coffee maker in the back corner.

And yet, the transition from cockpit to classroom couldn’t have gone much better for Petro, who flew many missions over Afghanistan yet never became familiar with its people until he became a teacher.

Two of his students are Afghan refugees, one of whom brought an Afghan flag handmade by her father.

“They waved it for rallies back home,” said Petro, who knew just what to do when one of the girls brought the flag to his class. 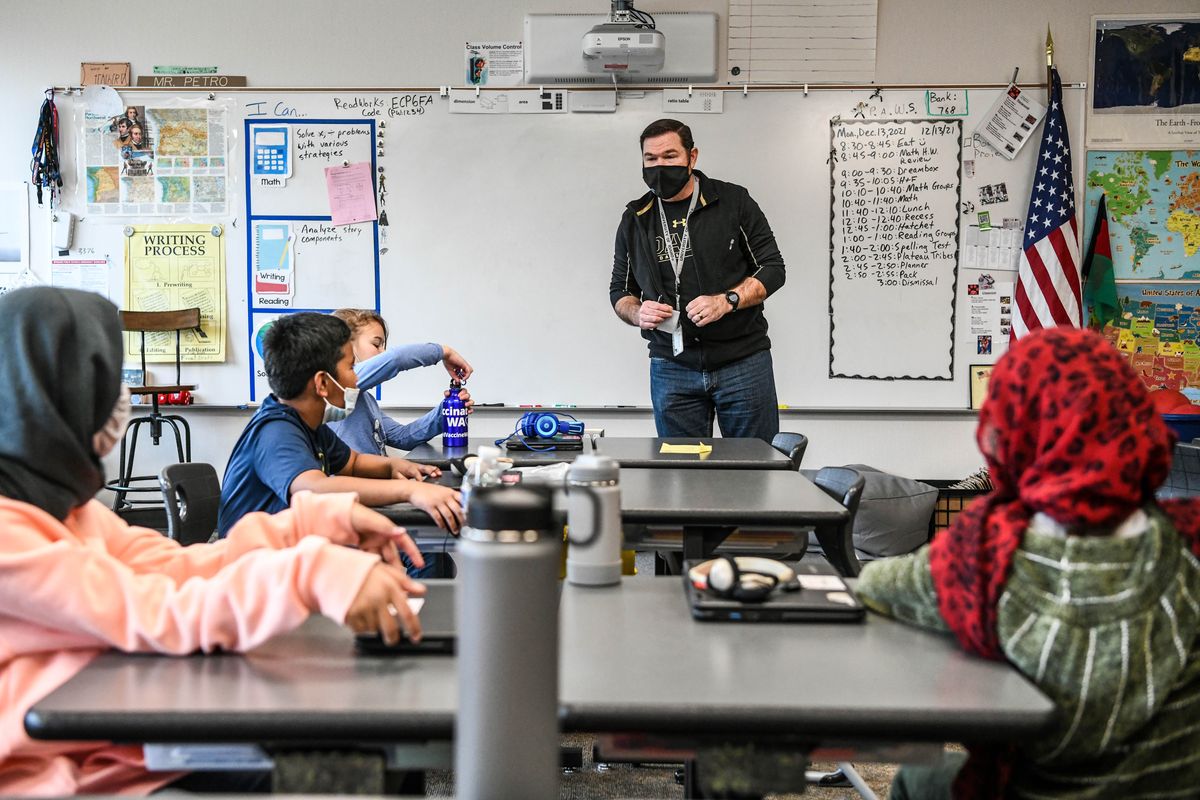 Now it’s mounted on the wall, next to the American flag that was presented to Petro on the day of his retirement from the Air Force in 2016.

“It just makes me happy that they can be represented,” Petro said Monday.

A few weeks later, the father came to the classroom for a parent-teacher conference and spotted the Afghan flag.

“His eyes welled up, and he came over and kissed it,” Petro said. “That was pretty special, the little thing that can go a long way if you’re the first American teacher these kids have had.”

According to the Department of Defense, more than 100,000 former military personnel have gone on to become teachers in the last 30 years.

In some ways it’s a natural move. The virtues of leadership, empathy and morale-building translate well to the classroom.

“Definitely, the military exemplifies itself in his work,” Linwood Principal Tricia Gesselle said. “He’s kind of the embodiment of stepping to the plate when he’s needed, and that cohesiveness and teamwork.”

For Petro and doubtless many others, that path took many detours.

A Colorado native, Petro tried and failed to get an appointment to the nearby Air Force Academy. He joined the ROTC at the University of Colorado, went through pilot training and was assigned straightaway to Fairchild.

Soon he was flying a KC-135, not usually a dangerous assignment. A few months later came 9/11, and Petro was based in Oman and flying refueling missions over Afghanistan.

“I decided at that point what I would do for a career,” said Petro, whose career took him, his wife and children to several different bases.

Spokane became home. By 2015, Petro had risen to lieutenant colonel but didn’t expect to go higher. At the same time, he found fulfillment through “teaching weapons school to 25- to 28-year-olds who still didn’t know the difference between their, there and they’re.”

Pointing to the back wall, Petro points out those three words printed extra-large on a piece of paper and notes that some of his 9-year-old students already have mastered them.

While at Fairchild he also had a chance to coach his son’s youth hockey team and found that he “loved the teaching role.”

“That’s when I realized that I wanted to be a teacher,” Petro said.

Enrolled in Whitworth University’s Master in Teaching Program, he took courses while helping raise a family and still on active duty.

By the fall of 2016, Petro was student-teaching at Garfield Elementary. A year later he was at Linwood, in north Spokane.

First assigned to sixth grade, Petro eventually moved to the fourth grade partly because 9- and 10-year-olds are old enough to form their own opinions, figure things out and do their thing, he said.

Fourth-graders are also mature enough to appreciate different cultures, and many are represented at Linwood.

Petro has taught Marshallese, Nepali, Syrian and students of other nationalities. His experience abroad, including a stint in Okinawa, reinforced the need to reach out.

“Living overseas, it’s important to at least make the effort to learn the culture and especially the language,” Petro said. In the classroom, that means encouraging students to learn phrases in the native languages of their classmates.

Reminders of Petro’s military background are ever-present. A large picture of a KC-135 hangs on the wall behind his desk, and when asked how many students he has, Petro referred to a “roster” of 18 kids.

Regardless of gender, he generally addresses each of them as “dude” and tries to embrace teamwork and show empathy for what people are going through.