Sheila Geraghty sat in a pew at the memorial service in September for William “Bill” Cooke and wondered what to do.

The man she knew as the anonymous donor who beginning in 2009 dropped a gold coin every year in the red Salvation Army kettle at the Fred Meyer in Wandermere was being eulogized. Geraghty, a former spokeswoman for the organization in Spokane, didn’t know how many other people knew Cooke’s holiday ritual, including the rest of his family.

“I just thought, what way could I get up there and say something that’s not going to give it away?” Geraghty said, knowing that Cooke insisted during his life that his donations, which he announced would end in 2019, remain anonymous.

So she dropped a note in the sympathy basket. Bo Cooke, one of Bill’s sons, read it and called her back. He told her the story, one he’s now sharing publicly after his father died of COVID-19, of a man who grew up in poverty, lived with the demons of fighting on the front lines in the Korean War and whose full philanthropic efforts will likely be lost to time .

“It shocked me. But I wasn’t that surprised,” Bo Cooke said from his home south of Spokane this week. 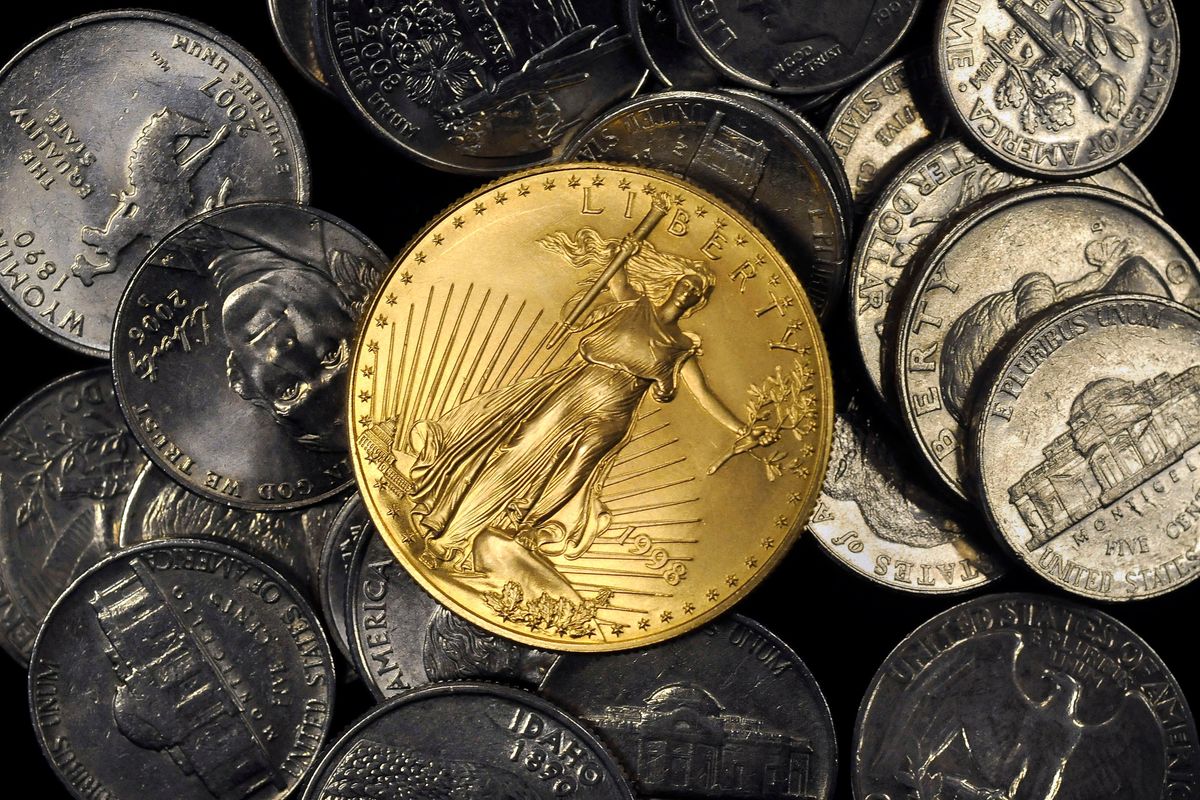 This Liberty Eagle gold piece was dropped into Salvation Army volunteer’s Ted Morris’ kettle at the Wandermere Fred Meyer store in 2009. Bill Cook is the person who donated the coin. (DAN PELLE/THE SPOKESMAN-REVIEW)

For one thing, the date of the anonymous donor’s last gift – Christmas 2019 – coincides with the elder Cooke’s ability to get out of the house. Bill Cooke’s wife, Beatrice, died in May 2019, and the widower gave away his car to live with family in Elk, Bo Cooke said.

The ex-Marine would joke that the screaming of people on the sidewalks kept him off the roads.

Then there were the stories about other donations the family was unaware of, including gifts of time and money to YMCA’s Camp Reed. After a 25-year stint in the Spokane Fire Department, during which he made the rank of captain, Bill Cooke was a gun dealer. For years, he gave ammunition, .22 rifles and air guns to the camp so that youngsters could learn how to shoot. He didn’t tell anyone about the donations.

Near the end of his life, the YMCA wanted to give him an award. Bo Cooke didn’t know why.

“So I called my dad and said, ‘Hey, you’re getting an award on Thursday?’ ” Bo Cooke said.

“None of your business,” his dad said, finally.

The gold coin donations came every year from 2009 to 2019, often at different times during the kettle drive that runs from just before Thanksgiving to Christmas Eve. Cooke would always drive to the Fred Meyer, and had a penchant for plopping the coin – a 1-ounce gold piece – into the same bell ringers’ kettle, wrapped in a $100 bill.

The first time he did it, Geraghty said, he called the office and she set up a meeting with then-head of the Spokane Salvation Army, Capt. Kyle Smith.

After meeting with Smith, Cooke plopped a wad of several hundred dollars in cash in the man’s hand as an additional donation to the charity. It was the last time he spoke in person to the organization, opting instead to deal with the bell ringer and the kettle.

The Salvation Army would be informed of the donation each year, but workers would wait to inform those counting the coins, cash, checks and other items – including sometimes expensive jewelry – that the gold was in their bag.

“One of those kettle counters in the morning would have the opportunity to have that gold coin pop out of their bag,” Geraghty said.

The Salvation Army would annually sell the gold coin to a local collector, who asked also not to be named, Geraghty said. All the while, Cooke promised to pay the difference between the asking price and the going rate on gold should the nonprofit not be able to get a fair price.

Bill Cooke’s son has several theories about his father’s giving ways. Notes attached to the coin were frequently signed, “just a beat up old firefighter.”

Bo Cooke said his father earned the nickname “Squirrel” because he’d insist upon running into houses first with a hose when there was a fire call.

“One story I heard, he came back with blisters on his ears,” Cooke said. “When it’s dark, you crawl in and you hit the ground. And it’s so black, with the smoke, you can’t see anything. So you sense where the fire is by how much your ears are burning.”

Cooke remembered as a kid stopping with bags of groceries at the front doors of houses. His father would get out, drop the bags, ring the doorbell and leave.

“That was some people we met last night, they had a kitchen fire in the house,” Cooke remembered his dad saying. “But I noticed there was no food in the house.”

Bill Cooke grew up poor in a cabin on the banks of Sacheen Lake, his son said. At 18, he signed up for the Marines – after being rejected two years earlier for being too young – and in his first year on military chow he gained 100 pounds and grew a foot because he’d been malnourished as a child.

Cooke went to Korea, where he served in the 1st Marines Division in intelligence. It took decades for Cooke to talk about that time, and later in life he turned to the bottle, his son said.

“He would say, you know, preplanning is important when you run a business,” the younger Cooke remembered.

His dad would then launch into a memory of being on a half-track on the front lines as a gunner, trying to stop an advance by North Koreans and their allies over a hilltop.

Bill Cooke said he told the guys switching out the ammo cans to throw them in front, not behind, the halftrack.

“When we get overrun, and we will, we’re going to be running for our lives that way and tripping over them,” Bill Cooke said. “I don’t want to be tripping over those things. Let them trip over them when they’re trying to kill us.”

Later in life, the sound of sneakers on ice or snow would upset Bill Cooke. It reminded him of the sound of ambushers in Korea.

Bo Cooke said his father’s pride in being a Marine conflicted with his feelings about what he had to do while in the service. That may answer part of the question why he gave so much, anonymously, and why he worked so hard to develop relationships with his grandchildren later in life.

“He was ashamed of what he was asked to do. But he was a good Marine,” Cooke said. “He was always proud to serve his country.”

Still, the elder Cooke sent his son an email a few years back. In it, he said he didn’t think he’d ever have peace.

“He was a hard man. He was a tough, tortured soul,” his son said. “And the last two years of his life, he made his peace, and he was the most content, happy – he was grateful.”

Geraghty and Cooke are telling the story now because they hope it will inspire others as the Salvation Army looks to end a season of giving challenged by the availability of bell ringers during the COVID-19 pandemic. The same pandemic that claimed Bill Cooke’s life at age 87.

The Spokane Salvation Army announced Friday that it had received a $1,500 donation in Cooke’s name, and that so far in 2021, it had received two gold coins and two silver bars as donations.

Cooke quoted a line from the Christian author and ethicist Lewis Smedes that he said perfectly encapsulated his dad. The author wrote “there are angels and ogres in our basements that we can hardly tell apart and that we have dared not face up to.”

“My dad had angels and ogres in his basement,” Cooke said, “and his better angels frequently, and anonymously, came out.”