Lynnell McFarland's family has set up a GoFundMe page to raise money for her medical bills, supplies and therapy. Donations can be made at the following links:

Lynnell McFarland had been trapped in her overturned car near Blewett Pass for nearly five days when she sent up a very specific prayer.

“I just said, ‘Dear God, I know I’m going to die someday, but please don’t let it be in this dark, deep ravine, where I’m never found.’ ”

About a half-hour later, McFarland guessed, workers from the state’s Department of Transportation spied her car from the roadway. The rescue made national headlines, and McFarland has spent the past several weeks recuperating in hopes she’d be at her Spokane Valley home for Christmas.

That’s a wish that was granted in large part due to the former registered nurse’s determination, said her daughter, Amanda McFarland.

“I’m stubborn. I don’t let anybody tell me what something’s going to be, I determine that myself,” said Amanda McFarland, who hopped in her own car and launched a social media search for her mother when she went missing last month.

With a statewide Silver Alert in effect, Amanda McFarland then publicly pleaded with people nearby to check where her mom’s phone last pinged off a curve on the Blewett Pass between Ellensburg and Leavenworth. 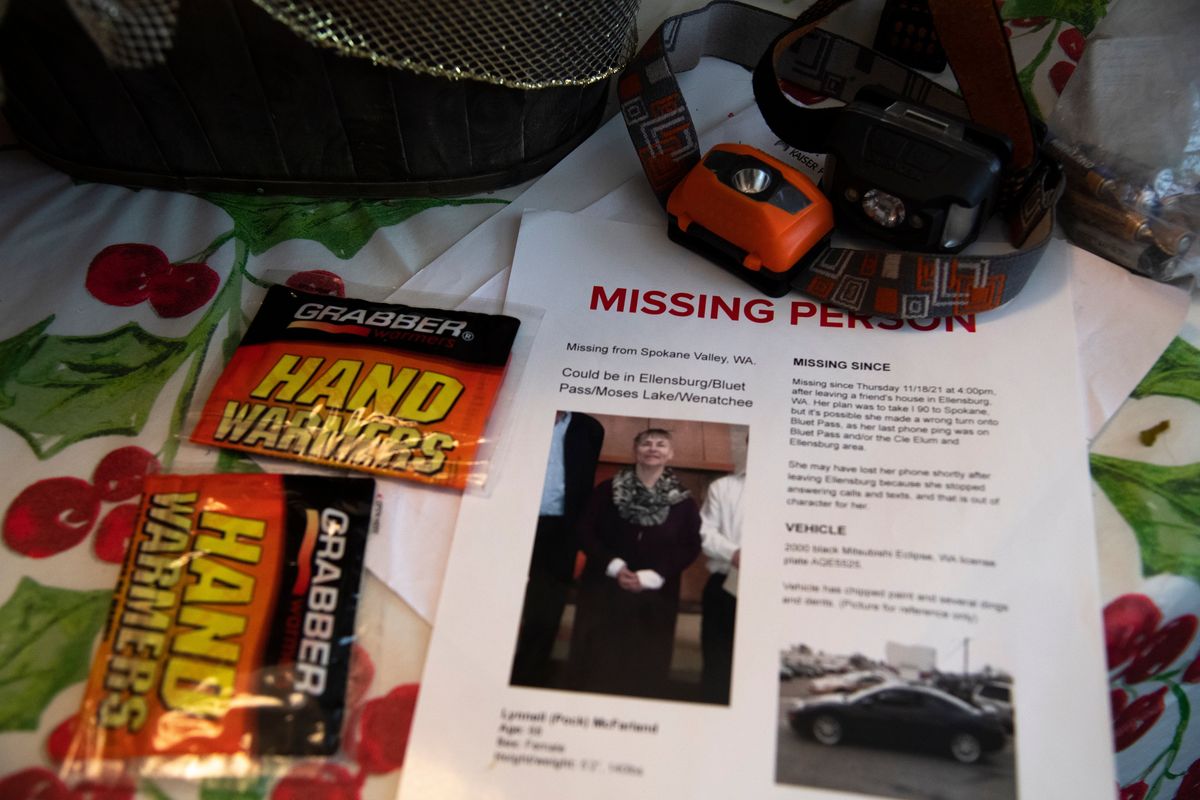 A flyer asking people to look for Lynnell McFarland sits on a side table in the Lynnells apartment in Spokane. She was rescued after a department of transportation employee spotted her car over a bank and in a creek. But she spent five days stuck in the car after it went into a ravine on Blewett Pass in Novemeber. Also on the table, head lamps loaned to Amanda by a WSDOT driver as she was out searching for her missing mother. (Jesse Tinsley/THE SPOKESMAN-REVIEW)

Lynnell McFarland, 68, went off the road Nov. 18 after striking a patch of black ice, she said.

Mother and daughter were traveling back to Spokane Valley from a memorial service for Lynnell McFarland’s aunt when their car broke down near Ellensburg. After the pair stayed with one of McFarland’s high school friends overnight, Amanda McFarland caught a bus home to care for her dogs while Lynnell McFarland waited for the car. She left in the evening.

Lynnell McFarland said she thinks she got turned around trying to find the highway in the dark and snow.

“I knew I was going downhill, when it happened,” she said. “And I thought I went straight down, but what actually happened was my car went head over heels.”

The Mitsubishi lodged between two trees, which prevented the car from tumbling farther to a cliff about 40 feet away, McFarland said. But it also likely prevented people in the area from seeing the car and seeking help.

The day after the crash, she noticed police lights flashing above her.

“He stopped, with his lights going, but he didn’t get out of the car and look,” she said.

Later, she said, she was able to see some hunters up in a tree that also couldn’t see the car or hear her cries for help.

The crash shattered glass inside the car, and McFarland said she’d struck the dashboard. The impact left her with a compound fracture in her arm and another fracture in her knee.

“When I leaned back to cut my seat belt is when I saw my bones,” McFarland said from her home this week.

She was able to cut herself free from her seat belt and because of the angle fell to the back of the car, where she made a shelter with clothes and plastic bags left in the car.

She had no food, and the only water was rain that she licked from the plastic bags.

The phone kept ringing with calls from Amanda McFarland and others, trying to find the car in the mountainous and heavily forested area of Highway 97. Lynnell McFarland said she was aware time was passing and knew people would be looking for her.

“I got really tired of it. I got tired of my legs being straight up,” she said. “But I just maintained myself, you know?”

The Department of Transportation workers who found the car rappelled down, and one of the first things Lynnell McFarland asked for was a handful of snow to help quench her thirst. But rescuers worried she might have abdominal injuries.

Amanda McFarland met a transportation department worker during her own search along the guardrail-less shoulders of Highway 97. The man had lost his own father in a car crash and offered headlamps and batteries to aid the search.

As Lynnell McFarland spoke about the moments being carried up the hill to a waiting ambulance, her daughter began to tear up.

“I couldn’t see her, but I yelled at her, Amanda, it’s OK,” Lynnell McFarland said. “I’m going to be fine. You don’t have to cry anymore.”

Once she arrived at a hospital in Wenatchee, McFarland said she downed three pitchers of ice water.

“It took three attempts in the ambulance to get an IV in because my veins were so flat,” she said.

“Did you want pizza, or like …?” her daughter asked.

“No, I just wanted ice water,” her mother responded.

Three surgeries followed, including one that put pins in her arm that are still visible at the knuckles. The retired nurse, who worked with mothers experiencing postpartum depression at Providence Sacred Heart Medical Center, said she’s spending her days walking and getting on a stationary bike to help repair her damaged knee.

Mother and daughter spent Christmas Day together at the apartment, just as Lynnell McFarland had hoped. But she dismissed any suggestion that it was her own grit that saved her life.

“Finding me was a miracle,” she said. “I wouldn’t call it stubbornness. Determination.”