In an effort to mitigate the spread of the coronavirus in its jail, Spokane County has opened a new intake and release center for people accused of low-level crimes.

The new facility will help to alleviate crowding at the Spokane County Jail’s booking area and, the county hopes, minimize exposure to COVID-19 among jail staff and inmates.

The new center not only allows for increased social distancing throughout the booking process, but will host a professional navigator who can direct defendants to available social services on their way out.

“It gives us the opportunity to do the necessary administrative things that we have to do for the courts and for law enforcement, but it also gives (defendants) kind of a hand up and some methodology for taking care of their needs once they leave,” Spokane County Detention Services Director Mike Sparber said. 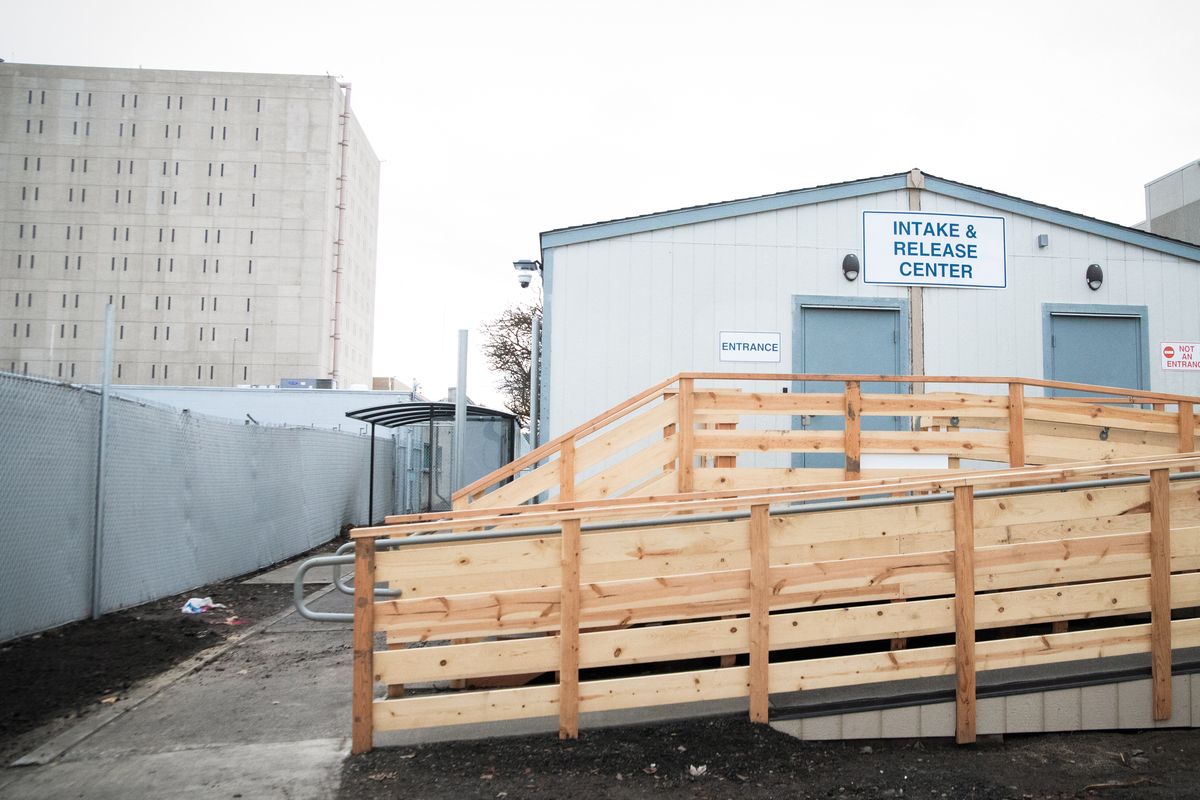 The exterior of the new Spokane County intake and release center is seen Monday just northwest of the Spokane County Jail at the edge of the public safety campus. (Libby Kamrowski/The Spokesman-Review)

The intake and release center, situated inside a double-wide trailer a short walk from the downtown jail, began operations last week with $800,000 from the county’s portion of the federal Coronavirus Aid, Relief and Economic Security (CARES) Act.

About 13% of the people who are taken to the jail qualify for immediate release after booking, county officials explained in a presentation to the Spokane City Council’s Public Safety and Community Health Committee on Monday.

The entire process takes between 20 and 60 minutes, depending on the day.

“We’re basically taking this population of folks out of the jail and moving them into the new intake and release center,” said Maggie Yates, county’s regional law and justice administrator.

For its pilot phase, the center will be open Monday through Friday, from 3:30 p.m. to 11:30 p.m. The center will be staffed by three detention services officers, one medical professional and one community health worker.

The center will only process people who are not believed to be a safety risk and are eligible to be immediately released on their own recognizance while awaiting arraignment.

When the center is not open, people will be booked and released inside the jail facility, as has traditionally been the case.

Arrestees will be screened for COVID-19 symptoms, and any other medical issues that might require attention, by the jail’s medical provider. Jail staff will take fingerprints, photographs and enter other relevant information in the jail’s computer system.

Then the person is free to leave, but he or she can connect with a navigator to address needs like transportation or housing. That service is not yet under contract, but should be within the next month, Yates said.

“I love the attention to detail such as bus passes; I think that is absolutely what we want to see so that people aren’t just turned loose with a hearty handshake and ‘Good luck,’ ” Councilwoman Lori Kinnear said.

Sparber said that, ideally, the intake and release center could one day be home to a “video court,” which would connect defendants with a judge virtually and “give them a meaningful court appearance right on the spot.”

Under the current system, Sparber said, book-and-release cases “are not being resolved,” and defendants are “just kind of being cast back in the pond.”

The center could eventually be used for other court services, including DNA collection, Sparber said.

The area was designed in consultation with the Spokane Regional Health District, according to Yates.

As of Monday, five jail employees and no inmates are positive for COVID-19 and remain in isolation protocols.

The county jail has not seen the same level of outbreaks that has gripped the Airway Heights Corrections Center – which, as of last Friday, had documented 1,670 cases of COVID-19 – but it did see an uptick last month that prompted an increased testing regimen.

Jail staff are tested weekly and inmates are quarantined for 14 days upon arrival.