This is why Cierra Walker came to Gonzaga in the first place – to get the ball in her hands, let fly from deep and help win a championship.

With some extra drama thrown in, Walker did just that Tuesday night.

With GU up by five points against BYU in a crucial West Coast Conference game at the Kennel, Walker was assessed a technical foul that helped the Cougars tie the game with less than 2 minutes to play.

But having lost her composure, Walker didn’t lose her shooting touch. Instead, she drained back-to-back 3-pointers from the left corner to give 19th-ranked GU its biggest win of the season, 63-56.

The win was the Zags’ 15th straight and gave them a two-game lead atop the WCC standings – not yet time to cut down the nets but worthy of an extended celebration at midcourt.

“It was very exciting,” said Walker, a senior transfer from Vanderbilt who made it clear that games like this more than make up for sitting out last season.

“Obviously, it was a super close game,” Walker said. “Afterward, I was just jumping up and down.”

“It was special,” said Fortier, acknowledging the rivalry with BYU, which will be renewed, COVID-19 protocols permitting, on Feb. 18 in Provo, Utah.

“It was emotional,” Fortier said, speaking for her team and especially for Walker. “But what mattered was how she responded to it.”

In a tough, chippy game that included 32 fouls, character counted more than usual.

Senior guard Jill Townsend came through with a team-high 18 points, the Zags were plus-10 on the boards and GU held BYU star Shaylee Gonzales to 12 points, barely half her season average.

The Zags also rose to the challenge of BYU’s bruising defense, drawing fouls and making 17 of 22 free-throw attempts.

In the end, that was more than enough to make up for an off shooting night for Jenn Wirth (2 for 10), foul trouble that sidelined LeeAnne Wirth in the middle two quarters and a disjointed half-court offense that produced just nine assists. 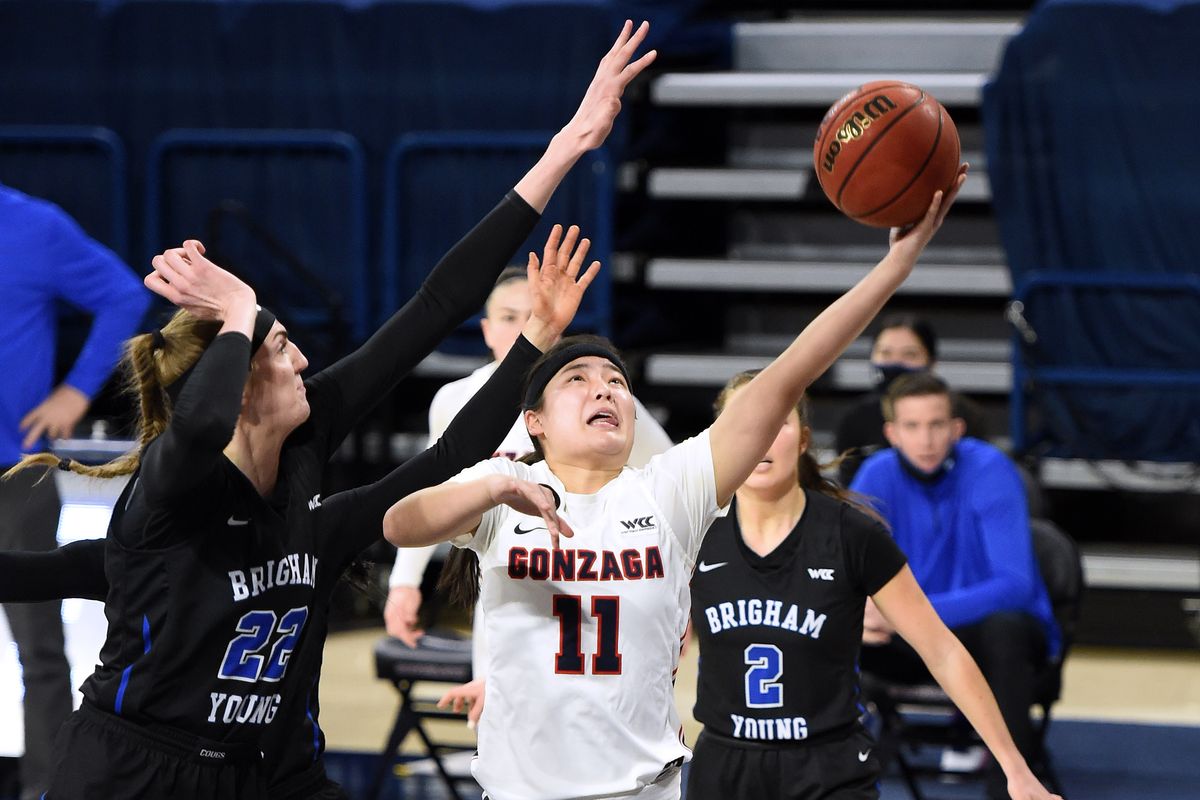 In a span of 53 seconds midway through the second quarter, the Zags got eight points to turn the game around.

Leading 21-20 with 4½ minutes left in the half, GU got a fast-break layin from Melody Kempton and pair of 3-pointers from Townsend to make it 29-20.

Kayleigh Truong capped the rally with a 3-pointer at the buzzer to give GU a 36-22 halftime lead.

For the half, GU shot almost 50% from the field and outrebounded the Cougars 18-13.

GU held a double-digit lead throughout the third quarter before BYU made its move late in the game.

With 2:54 to play and GU leading 52-47, Walker was assessed a technical foul follow a verbal altercation at midcourt.

BYU made her pay, as Paisley Harding sank both free throws. A minute later, Gonzales drained a 3 to tie the game at 54 with 1:54 to play.

But on the next GU possession, Kayleigh Truong found Walker on the left wing, and the Vanderbilt transfer found the net.

Following a BYU turnover, the ball came in the paint to LeeAnne Wirth, who found Walker at the same spot for another 3.