What looks like a puddle or a patch of ice, depending on the weather, on a new section of Forker Road is potentially a dangerous and costly mistake that has sent Spokane County in search of a natural spring beneath the roadway and will likely lead crews to replace a section of fresh asphalt on the long-awaited Bigelow Gulch Urban Connector project.

And while time and money are spent fixing that issue, county officials are also facing uncertainty about how they will fund the next phase of the connector after identifying a more than $2 million increase in the projected cost since 2018.

These speed bumps are not the first the $70 million project has faced since work began in 2008 on the 8.2-mile corridor designed to connect north Spokane to the northeast side of Spokane Valley. 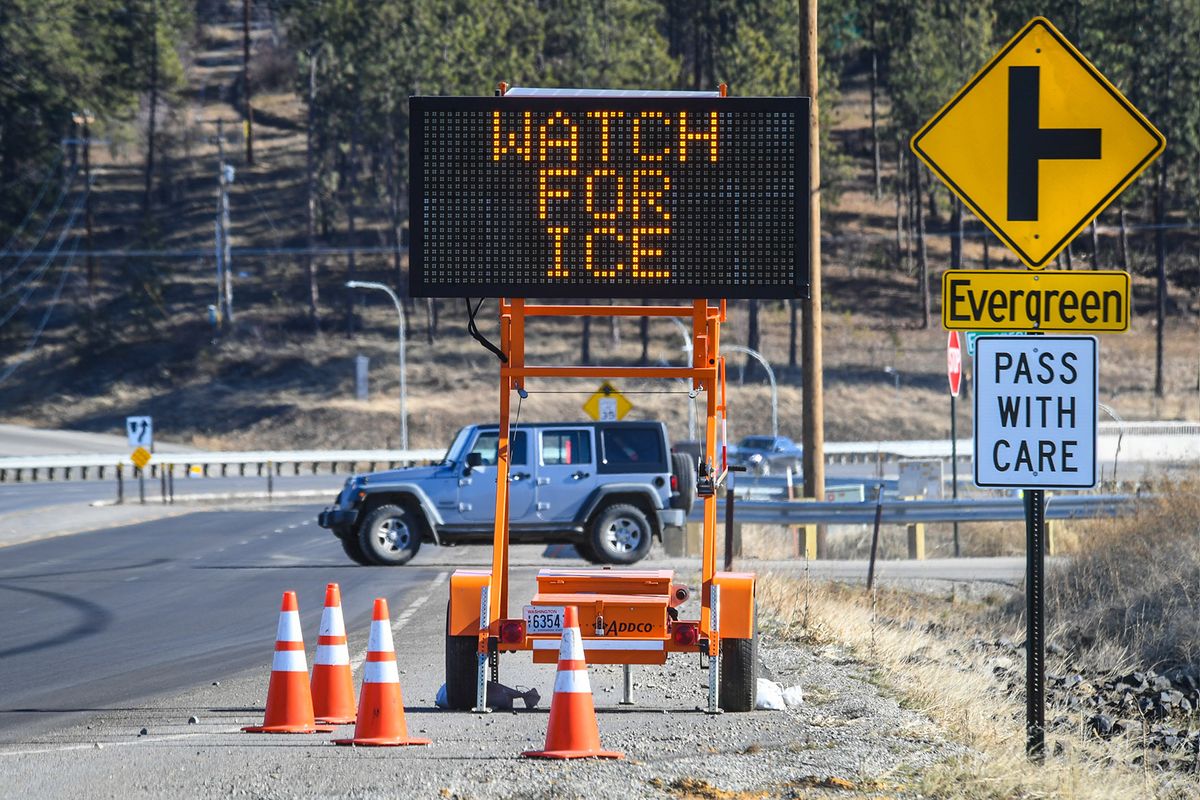 Vehicles approaching from the west on Bigelow Gultch Road are warned of water from a natural spring leaking through the asphalt near the Bigelow Gulch-Forker Rd. interchange, Wednesday, Feb. 10, 2021, leading to ice on the road and dangerous conditions. (Dan Pelle/THESPOKESMAN-REVIEW)

Frank and Gloria Bingaman won a $132,500 verdict in 2019, after going to court with the county over a dispute over the fair-market value of about a third of an acre of the couple’s cattle ranch, which the county used to widen Bigelow Gulch Road between Argonne Road and the recently constructed Forker Road interchange.

And Spokane County may have to pay out to some other area landowners who have disputed the project’s right-of-way in that section of the project.

“There are numerous cases still pending,” according to Alexandria Drake, a lawyer with Dunn & Black who represented the Bingamans. “Due to COVID a lot of the trials have been delayed.”

While those other cases remain unresolved, the issue of how much to pay property owners for the land needed to construct the connector has reared its head again.

In January 2019, an assessor hired by the county estimated it would cost just over $510,000 to acquire the land needed to continue the connector from the intersection of Progress and Forker roads to its proposed eastern terminus at Sullivan Road and Wellesley Avenue in Spokane Valley, county Engineer Chad Coles said.

But that estimate proved to be off by $1.77 million when the county did a complete appraisal last year.

Coles attributed the increase in property values in large part to the fact that the road impacted East Valley School District playing fields adjacent to Sullivan Road, which is slated to become part of the Bigelow Gulch Urban Connector this summer through a new section of roadway that will link it to Forker Road.

Those fields currently lie east of Sullivan. But Coles said the appraiser determined the connector’s presence would impact those fields and would require the district to move them to the west side of the road.

That created a domino effect on other district infrastructure in the area and led to the escalation in the cost of the right-of-way, according to Coles.

With the connector running between East Valley High School and its relocated fields, the county also agreed to spend an extra $305,000 to build a pedestrian underpass beneath the connector that will provide a safe way for students to get to the fields.

To chip away at the combined $2 million in unforeseen costs, Coles has done something he said he’s never done in his 30-year career with the county: asked for a bailout from an outside funding agency.

Specifically, the county is seeking an additional $850,000 from the Spokane Regional Transportation Council.

On Thursday, SRTC’s board of directors took up the question of whether the project was technically eligible to be considered a cost overrun and to receive the requested infusion of cash

While the board voted the project is eligible, it didn’t provide the money at Thursday’s meeting. Instead, it moved the matter to the board’s next meeting on March 11, when members will decide whether to grant the project money.

But according to Eve McMenamy, SRTC’s principal transportation planner, the council only has $429,000 to offer the county.

Asked what it would mean to the project if SRTC doesn’t approve the funds, Coles said, “Obviously, it jeopardizes the project in some way.”

But even if the SRTC board agrees to provide those funds, the county would have to come up with the rest of the funding .

The time it may take to track down new funding, Coles said, could delay the project. Or it could force the county to move some money around and “not do some other important things that we’d like to do.”

While Coles said the county has identified a way to bridge much of the shortfall, a gap of about $420,000 remains.

“I’m confident that we’ll find a way to fill that gap,” he added, “but I don’t have it filled right now.”

Meanwhile, he said, the county likely will have to spend time and money going backward, to deal with the leak on a section of Forker Road that was built over the past two construction seasons.

The result is a slick road and dangerous driving conditions.

County crews have used sand and de-icer to deal with the ice, and the county also dropped the speed limit on Forker to 35 mph to improve safety.

Despite those interventions, Coles urged drivers to be “careful going through that area.”

Asked whether it was a mistake that could have been prevented, Coles said, “It’s certainly not inevitable, but some things are unforeseeable.”

He said surveys and geotechnical reports identified “areas where it’s wet and you see springs coming up, but I don’t know of a surefire way to predict springs coming up. We do all the things we can to reasonably consider and try to mitigate those.”

But, he acknowledged, “We missed that one.”

He also said he would “love to have it fixed as soon as possible.”

Doing so, though, is going to take some work. The first step is “trying to figure out where exactly” the water is reaching and breaching the pavement. Crews will then have to close the road and “rip and tear” into it to install an underdrain to capture and redirect water from the roadway.

As for the cost, Coles said, “I don’t have any numbers on that right now. … But we do have to make it right. None of that comes from anybody else’s pocket. That’s not something we go back to SRTC to fix.”

While Coles said he hopes “to be doing something fairly soon” to deal with the spring, the county is also pressing to stay on schedule with the new section of the connector and start work this summer.

It’s important to do so, Coles said, to meet the commitments the county made to its existing funders to deliver the project on time.

There’s also other work that depends on the county completing the connection from Forker and Progress to Sullivan and Wellesley, where the city of Spokane Valley plans to improve the intersection and add stoplights this year.

Coles said he’s also eager to deliver what he describes as the “huge benefit” the completed connector will offer the public.

“The sooner you get it in, the more the public benefits,” he said. “All the things that make it a good project make it good to get it done sooner.”