A GRIP ON SPORTS • A staple of cartoon comedy concerns a snowball rolling downhill. In such instances, the snowball starts small, picks up momentum, grows larger and finally encases every character in its path. Then it crashes into a tree. Reality is usually different, though when it comes to the snowball that is COVID-19, there are similarities. Without any semblance of humor, of course.

• This college basketball season has seemed out of control at times. And, honestly, it is. The only control has been in the hands of a microscopic, and deadly, virus. Whenever it rears its ugly head, programs are forced to shut down, stop whatever they were doing and wait out test results. The goal? To keep its spread under control.

The NCAA is deathly afraid, in the existential way, of the virus invading its tournament. The organization, which had to cancel last year’s event, its economic driver, due to the early stages of the pandemic, can’t allow that to happen again. 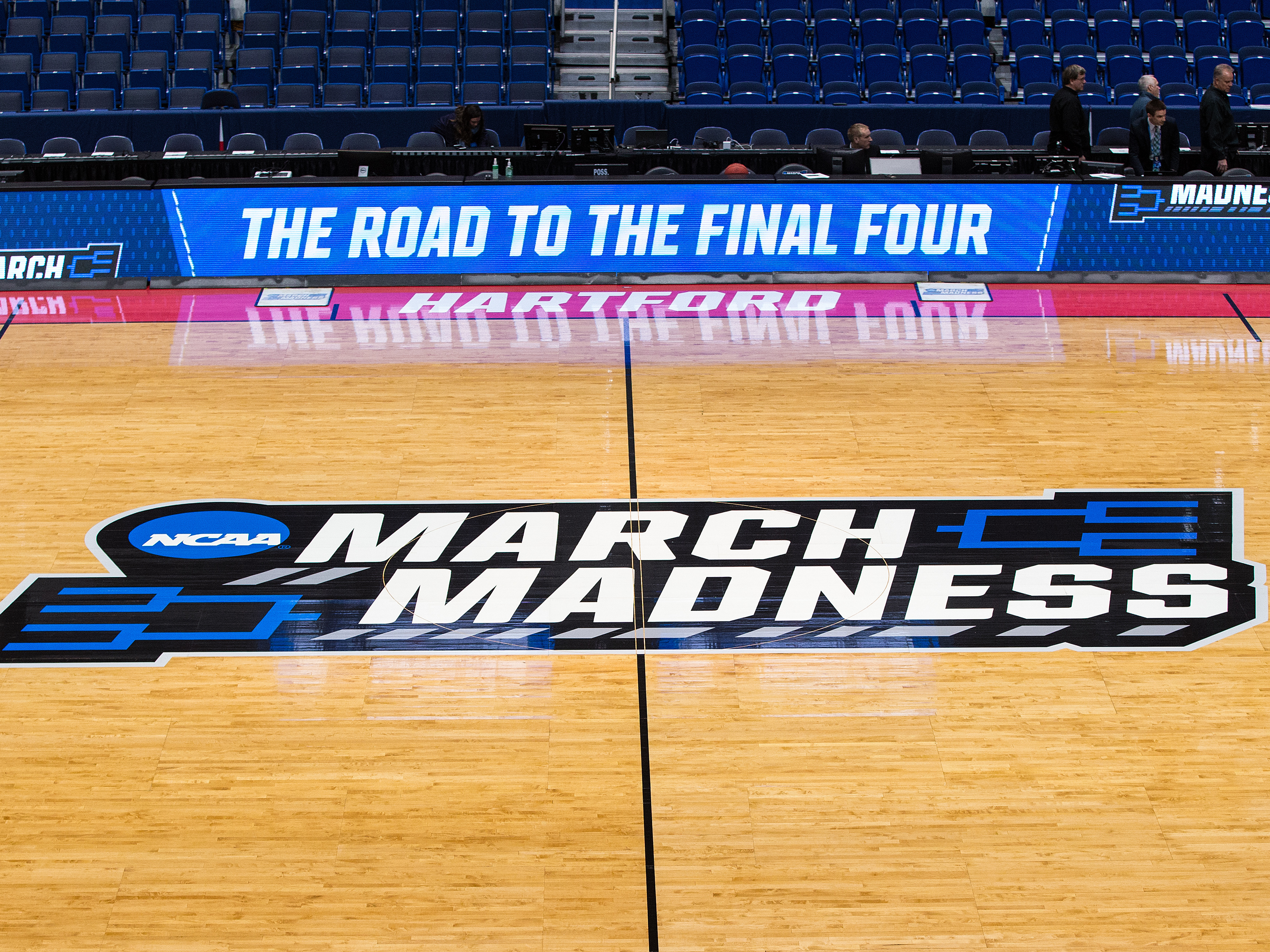 It is building a semi-bubble in Indiana, hoping to keep the virus at bay and to play every game on schedule until the April 5 championship game. But that can’t happen if a team or teams bring COVID-19 with them to the Hoosier State. Thus, the organization has mandated seven consecutive days of virus-free test results before a participating team can enter the bubble.

The announcement a few weeks back seems to have started a snowball rolling. That snowball has grown larger each day, threatening to encompass the legitimacy of conferences’ postseason tournaments.

The most visible example of that around these parts is the West Coast Conference. In the past, members gathered in Las Vegas a week earlier in March than most of its Pacific Coast brethren and picked champions to send into the tournament.

But will the best of the West Coast Conference play in Vegas this season?

Up until the pandemic hit, for a conference to hold a postseason tournament, it had to guarantee its NCAA automatic berth to the tourney champion. No picking the regular season title winner to move on and then holding a separate tournament to, you know, help everyone else burnish their resume.

That was then. This year is, well, different.

The NCAA decided, in what seemed like a minor decision at the time, to mandate a certain number of games played before a school would be considered for the NCAA’s championship tournament. But that decision led to another. What if some teams needed games to meet that threshold and others didn’t? How does a conference get there equitably? Does the conference tournament come into play?

The snowball picked up momentum when the NCAA allowed conferences a chance to designate either their regular season champion or the tournament champion as their automatic-bid winner. And to allow schools to opt out of conference tournaments due to COVID-19 concerns. Each conference must make their decision about the automatic berth known to Indianapolis by Feb. 26.

Almost every school has been impacted this season by COVID-19, including Gonzaga, which dealt with an early season pause. That cost the Zags their showdown with Baylor. Without that determining contest, the two programs have been 1-2 nationally all year, even though the Bears are just now emerging from a long coronavirus-caused cocoon.

Should the Zags, and other schools locked into NCAA berths, actually travel to a conference tournament site, risk being waylaid by the bug, all for games that might not mean anything to the selection (and more importantly to GU, the seeding) committee?

The risk-reward factor doesn’t seem to tip in favor of going. But only if you believe the chances of contracting a case are greater in, say, Las Vegas than Spokane. It’s a quandary all right.

Especially when you consider how badly the WCC’s basketball season has been undercut by the coronavirus. It is so bad, with so many games missed, the conference has contracted with Ken Pomeroy to come up with an algorithm to determining standings more detailed than just winning percentage. When some schools have played half as many games as others, it is needed, as Jim Meehan explains in this story.

But is the WCC tourney even a factor for GU? And would it be gaming the system in the conference decided to give its automatic berth to the tournament champion as Gonzaga and, say, BYU decided to stay home?

For the Zags, there is little doubt they would still make the NCAAs, still be either the No. 1 or No. 2 seed and still have every goal they desire available. For the Cougars, however, it’s a crapshoot (if such games of chance are even allowed in Provo).

The selection committee could just eliminate BYU, a bubble team with a good but not overpowering resume, in favor of whichever school wins in Las Vegas. Such questions have all been rolled up into that huge snowball we saw coming weeks ago.

So where does that leave the conference, and most importantly for folks in Spokane, the Bulldogs, as we near the bottom of the hill? Still trying to determine which way to go. Stay home? Go to Las Vegas? Have a tournament at all? Money from television deals. Money from the NCAA Tournament. Public perception. Player health. Precedent. Risk/reward. All are wrapped up in the biggest snowball you’ve ever seen outside an old Calvin and Hobbes comic.

Now the trick is to avoid crashing into a big tree. 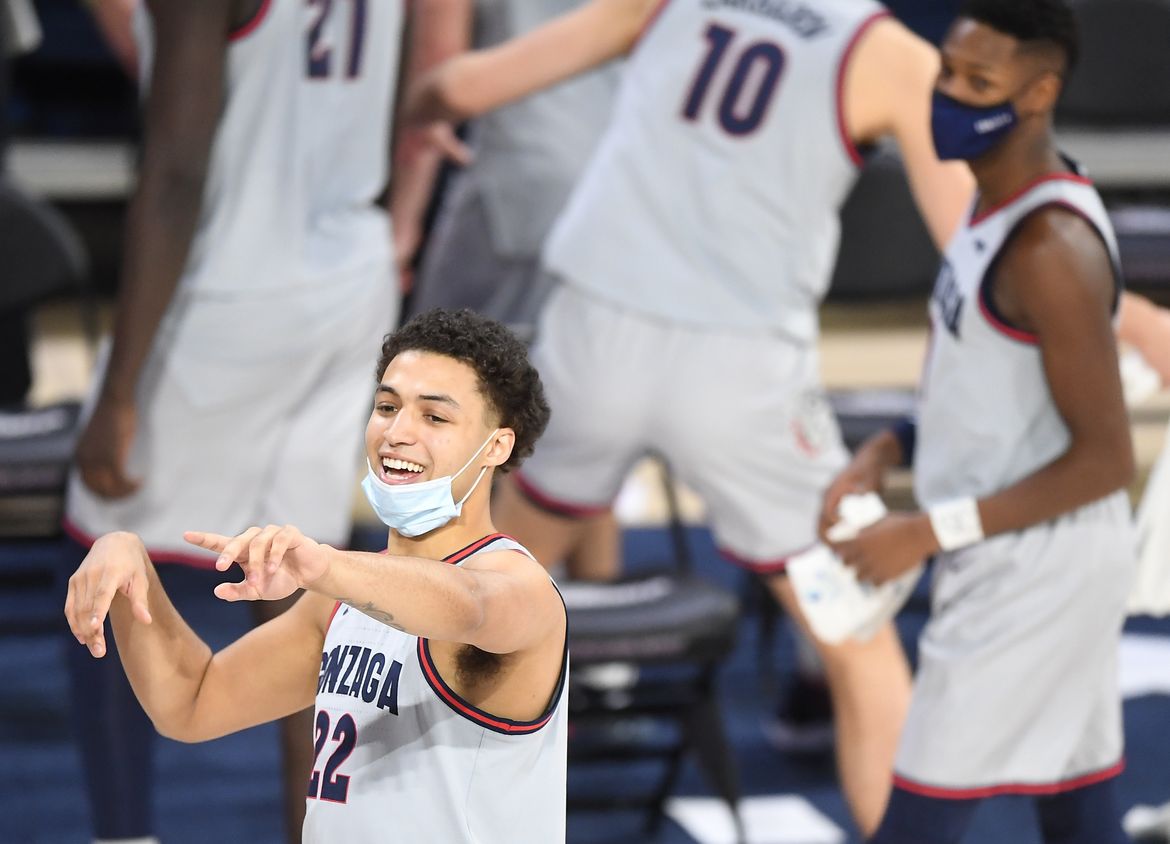 Gonzaga: The looser COVID-19 restrictions in the Spokane area will allow the Bulldogs to open McCarthey to a few more fans. Enough, in fact, the players’ parents, and other family members, will be allowed in to watch their sons and daughters play. That means something more for Anton Watson’s family, who just happen to live in the area. Jim Meehan talked with his father, Deon, about what the new rules mean to Anton’s relatives. … We linked Jim’s story about the WCC tourney above and have another link here in case you missed it. … The women have entered this national power ranking. … Elsewhere in the WCC, yes, Brigham Young University is wondering what to do concerning the tournament. That’s only a question because the Cougars have been winning. 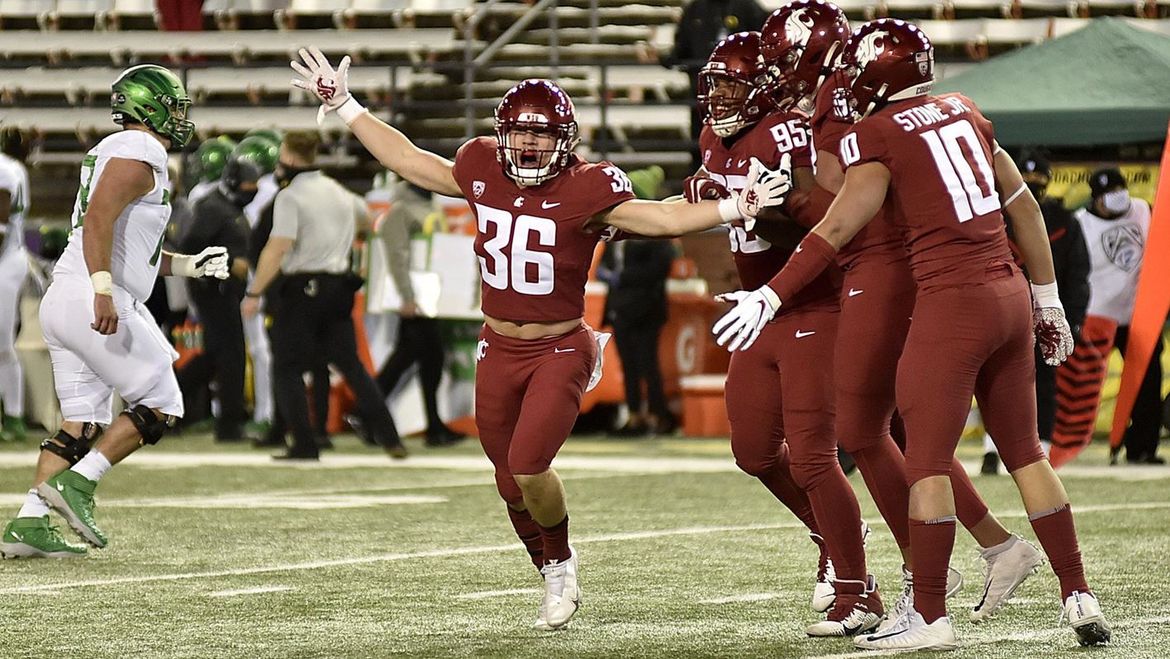 WSU: If you were wondering why freshman defensive back Ayden Hector was suspended from the Washington State football team, it may have been because of a recent arrest in Pullman. Theo Lawson has more in this story. … Around the Pac-12 and college basketball, just how many NCAA bids will the Pac-12 earn? … Is it possible for Colorado and Arizona State to make up their postponed game? … The pandemic has been troublesome everywhere, including UCLA. … USC is the conference’s top school. But the Trojans still need to improve. … In football news, Washington isn’t shying away from transfers. … Steve Sarkisian in Texas is another threat to the conference keeping top recruits home. 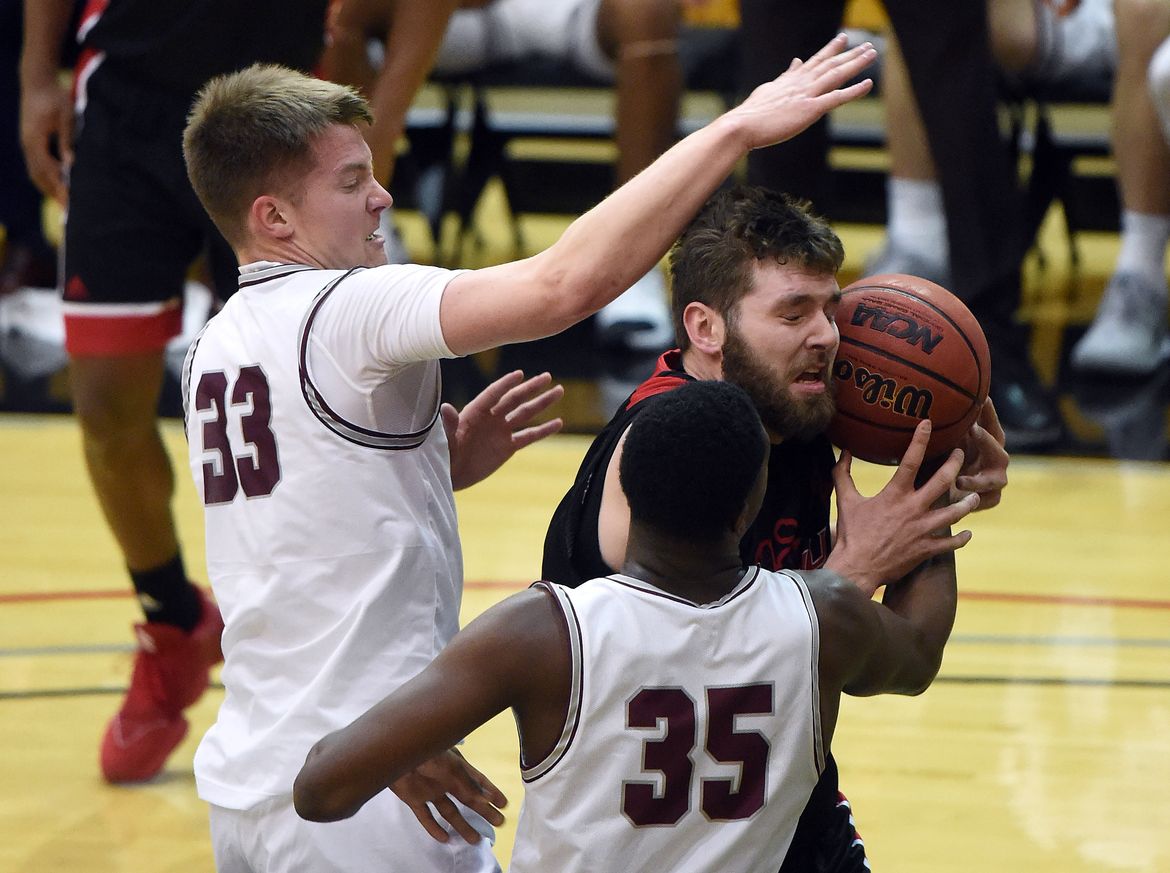 EWU: Montana isn’t Montana this year in men’s basketball. But that doesn’t mean Shantay Legens is any less worried about this weekend’s home-and-home series with the Grizzlies. Ryan Collingwood has more in this preview of the two games, which start Thursday night in Cheney. … Elsewhere in the Big Sky, Montana State officially introduced its new football coach. And made more staff changes. … Northern Arizona won’t be allowing fans at its football games. … Cal Poly is having virus issues, so UC Davis’ season may not start on time.

Preps: There was competition last night between Washington high schools. Indoors. What a concept. Dave Nichols has a roundup.

Chiefs: Former Spokane star Ty Smith’s NHL career is off to a fast start? How fast? Dan Thompson has that answer. 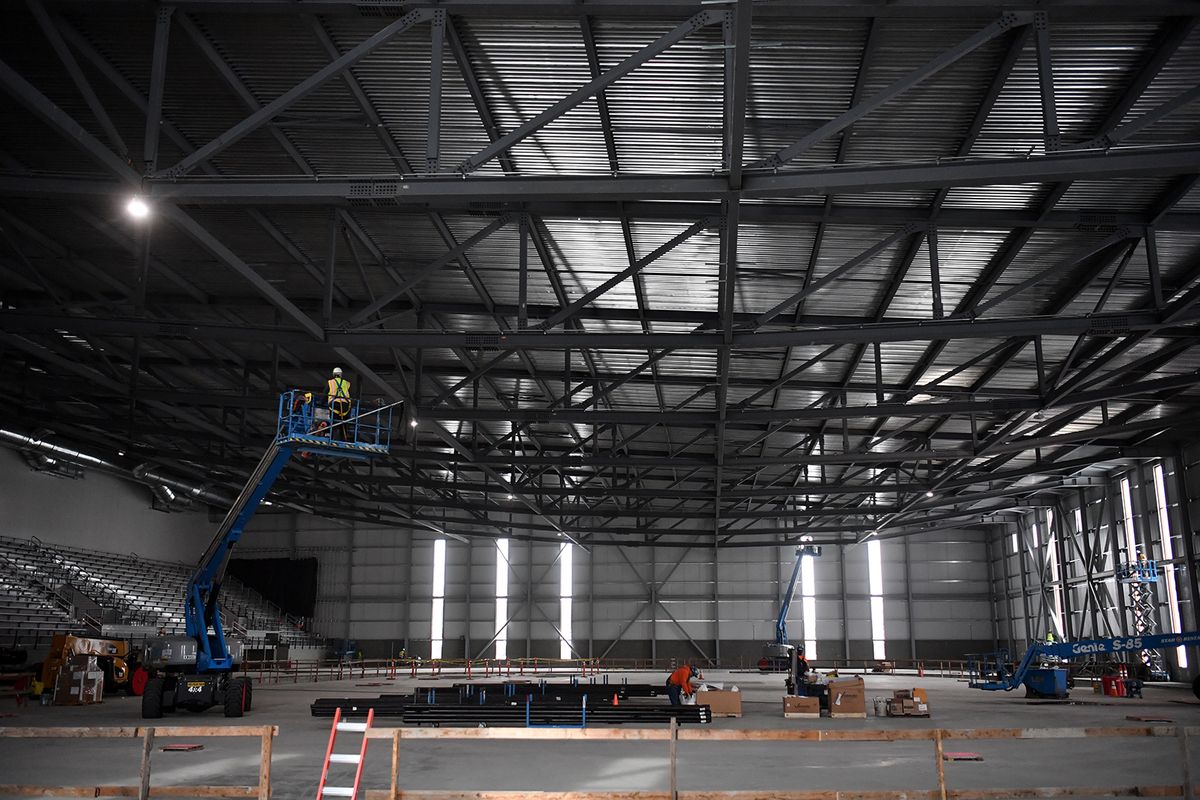 Running: The builders of the Pod, or as it is officially know, the Podium, held a media tour yesterday as the indoor athletic facility moves toward a fall opening. Adam Shanks has the story and Tyler Tjomsland has a whole bunch of photographs.

Mariners: Our (possibly former) friend, Seattle Times’ reporter Ryan Divish, joined Larry Weir yesterday for the latest Press Box podcast. We say former, because Ryan tweeted a picture this week of his annual first meal in Arizona, from In-n-Out, and had pickles on his burger. I’m not sure I can stay friends with anyone who asks for pickles to be added to a Double-Double. … Spring training is beginning. Ryan has a story from Arizona on James Paxton and Larry Stone tells us what he will miss by not being in the desert this year.

Seahawks: So how much is Chris Carson worth? And are the Hawks willing to spend it?

Sounders: Chris Henderson decided it was time to accept a new challenge.

• If it was up to me, I would take both Gonzaga’s basketball teams, fly them to Area 51 and put them in guarded, sealed facilities until they leave for Indiana. Both are making the NCAAs and, on the men’s side, anything that could interfere with the program’s strongest-ever national title quest has to be avoided. Including Las Vegas. Until later …