John Sessions has flown to the Arctic, landed on a flat-enough ice cap, traversed the Atlantic Ocean in a World War II bomber, been “fine” after midair engine failures several times and, in 2018, lost much of his left leg when his plane dropped from the sky.

He’d just finished performing in an airshow “going very fast and upside down,” he said, but it wasn’t until what was supposed to be a relaxed flight after the show with a couple of patron passengers in tow – on his prized 1930s short-haul biplane airliner – that an engine stalled. That, combined with the weather, sent the plane careening to earth.

Upon crashing, his leg was completely detached. The belt he used as a tourniquet likely saved his life, he said.

That didn’t stop him. With more than 10,000 flight hours under his belt, he knew an injury or even death was possible. Why did he stick with risky flights in vintage aircraft?

“It has a lot to do with your attitude about life,” Sessions said. “Are you going to be so cautious that you don’t matter or are you going to do something?”

Sessions took another risk when he moved his life and his museum, originally stationed in Everett, to Spokane. 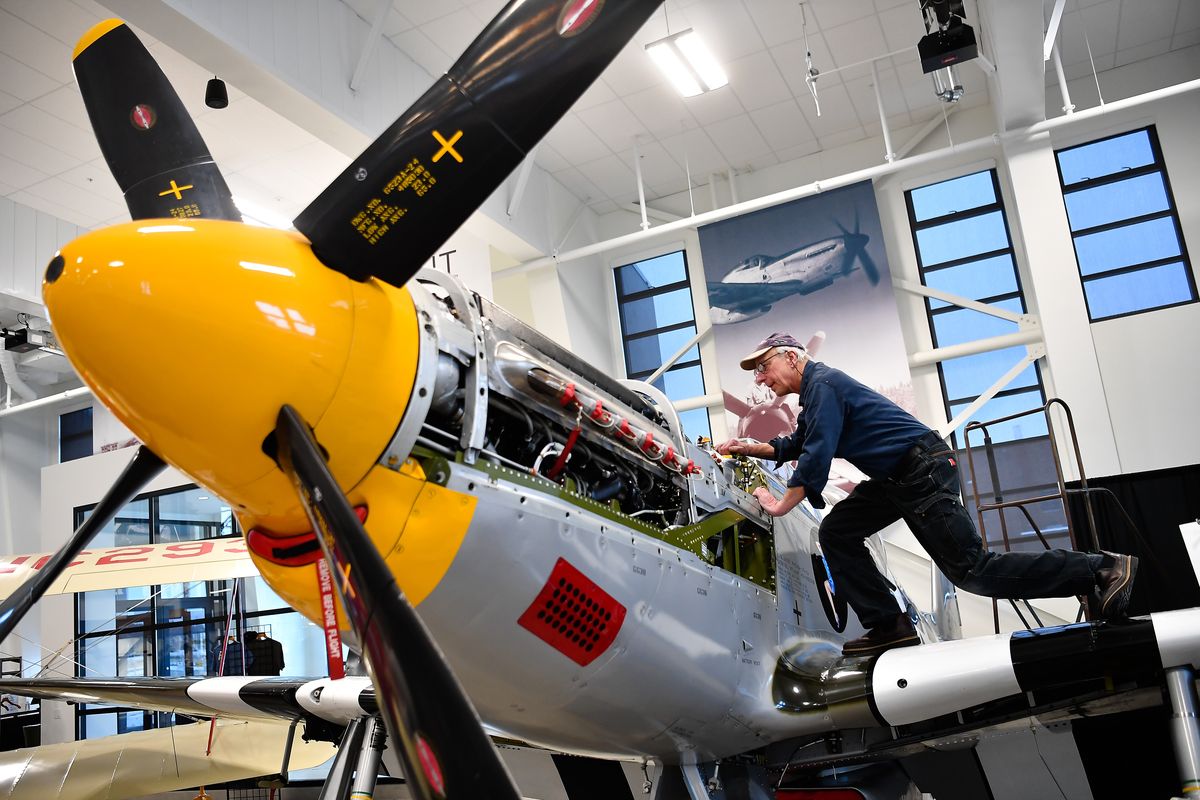 Ben Olson, Director of Maintenance at the Historic Flight Foundation removes a battery charger from a P-51B Mustang on Thursday, February 18, 2021, at Felts Field in Spokane, Wash. (Tyler Tjomsland/THE SPOKESMAN-REVIEW)

The hangar on East Rutter Avenue that houses the vintage aircraft museum belonging to the Historic Flight Foundation, of which Sessions is chairman, took about two years to construct. Once it opened in December 2019, the collection of airworthy “Golden Age” planes drew crowds of 1,000 people per week in its first weeks open, he said. Then COVID-19 struck Washington.

After months of being closed with a brief reopening in the fall, the museum reopened Thursday.

The closures have made time for projects and grant writing, said Sheila Geraghty, one of three employees.

“We just have enough funds to pay our bills every month without any income,” she said.

They made do selling flights on the vintage planes and, Geraghty said, it delights her to think that about 20 people who woke up on Christmas morning and “opened up the gift of flight.”

The foundation’s collection of aircraft, most stationed in Spokane, includes several award-winners for historically accurate restoration, down to the linens filling the wings, Sessions said. Those trophies, sponsored by the National Air and Space Foundation and Rolls Royce, are tucked away upstairs at the museum. What displays alongside each aircraft is a write-up of its history, and each has a rich tale.

A P-51 Mustang sits near the entrance of the museum. The fighter plane saw 700 hours of combat flying between 1943 and 1944, including four deployments on D-Day, and holds 900 rounds, Sessions said. The phrase “the whole 9 yards” comes from Mustangs, with their 9 yards of ammunition, he said.

“That lasts about 14 seconds,” Sessions said.

Across the hangar, past a massive B-25 Mitchell bomber named “Grumpy,” a T-6 Texan advanced trainer “Does everything the mustang will do at about two-thirds the speed,” Sessions said.

“This was the gateway drug for fighter pilots in World War II,” Sessions said.

Near the trainer, a D17S Staggerwing looks like metal with its glossy fire engine red paint job, but the 1944 business airplane is actually cloth stretched over engineered systems of wood, which become “toothpicks” if you crash, Sessions said.

The history feels close to him. His father was a paratrooper in World War II who jumped out of a Douglas DC-3, like the one parked outside the museum, on D-Day, he said. Sessions’ mother was the last nurse who treated his father, whose right leg required multiple bone grafts to function.

“Between the two of us, we’ve got one good pair of legs,” Sessions joked.

Sessions leans against the wings of his favorite planes like he’s leaning on a buddy’s shoulder. He said he believes in the power of touch and in-person experience.

He’s hopeful for the tactile experiences for museum visitors in the months ahead. Feb. 27, the hangar will be a wedding a venue for the first time in months. The museum’s first in-person STEM event for teens will come in April. And this summer, Sessions will fly aircraft from his collection in airshows.

“The period of history we study is itself full of serious challenges that heroic people overcame,” Sessions said. “Maybe that’s a metaphor for the pandemic.”