It was typical Gonzaga, just a more amped-up version.

When the Bulldogs’ turnovers stopped and San Diego’s started, the track meet was on and the basketball game was essentially over.

No. 1 Gonzaga piled up points off turnovers and paint points – two season-long staples in the nation’s top-scoring offense – and pounded San Diego 106-69 Saturday at the McCarthey Athletic Center.

The Zags (22-0, 13-0 West Coast Conference), who clinched the conference regular-season title with a rout over Saint Mary’s on Thursday, reached another milestone with the blowout victory.

They’ve won 19 straight games by double figures, matching the longest in-season streak by an Associated Press No. 1 team since UNLV in the 1990-91 season. UCLA’s 1971-72 team holds the record with 20 consecutive double-digit wins.

San Diego (3-8, 2-5) came off a three-week COVID-19 break with a nice road win over Santa Clara on Thursday, but the Toreros couldn’t keep up with GU.

“We extended it out really good. I thought we extended out all weekend against Saint Mary’s and San Diego,” said Gonzaga coach Mark Few, whose club scored at least 100 points for the fifth time this season. “If nothing else, we just kind of pressured them out of their normal offensive operating areas. The defense was pretty good all the way up until that last 5 minutes when we subbed pretty liberally.”

The Zags were sloppy with five early turnovers, but in a sign of things to come, they scored on every turnover-free possession to take a 13-7 lead.

San Diego, meanwhile, was on a near turnover-per-minute pace with 10 in the first 12 minutes. Gonzaga converted those miscues into 16 points and an 18-point lead.

“That defensive side of the ball is where we’ve taken strides in the last few games,” Zags guard Andrew Nembhard said.

Gonzaga finished with a season-high 33 points off turnovers, edging out 32 vs. Virginia. The Zags’ 70 paint points rank third behind the games against Portland (80) and Dixie State (72). 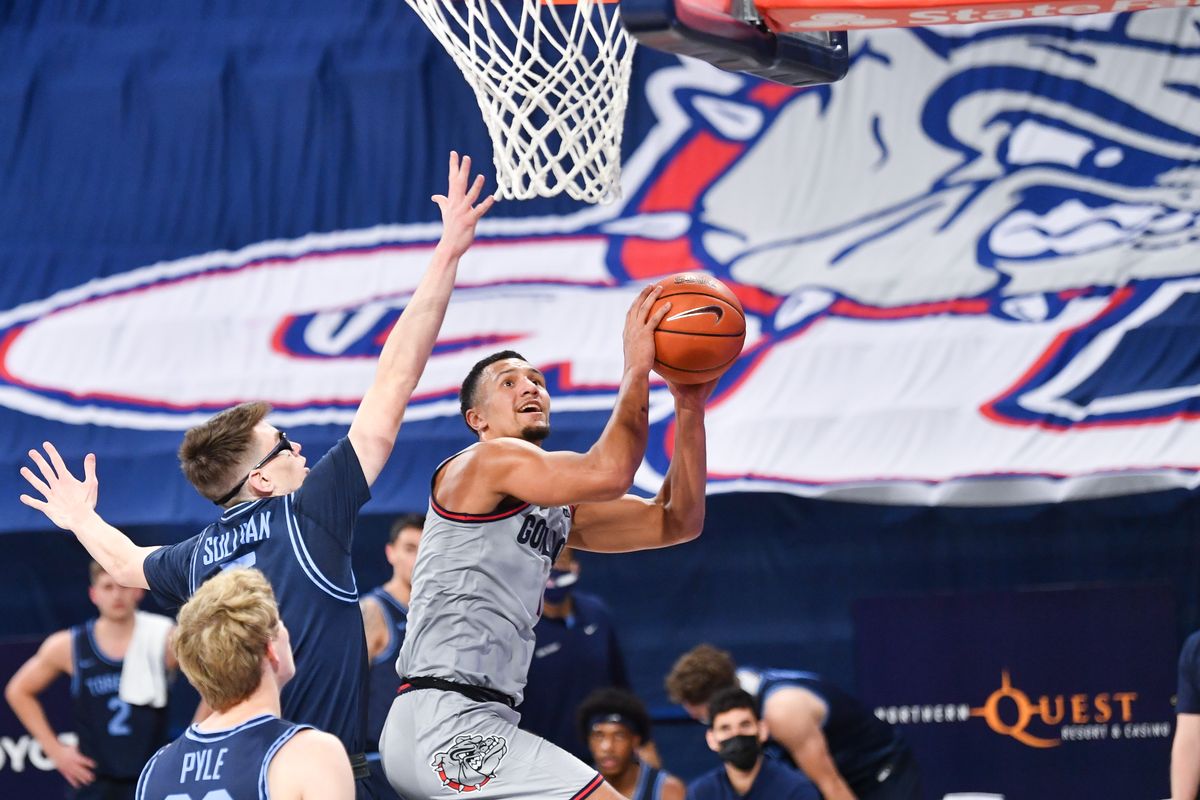 Gonzaga Bulldogs guard Jalen Suggs (1) fights to the basket during the first half of a college basketball game on Saturday, February 20, 2021, at McCarthey Athletic Center in Spokane, Wash. Gonzaga led 51-22 at the half. (Tyler Tjomsland/THE SPOKESMAN-RE)

“We can really score in the paint and we have a high percentage of shots in there,” Few said. “We’re very efficient and it comes in a variety of ways. It comes off Drew (Timme) wheeling and dealing, it comes off cuts and finishes at the rim by Jalen (Suggs) and Corey (Kispert).”

Timme contributed to the interior dominance with 21 points, his eighth 20-point outing in the past 10 games. He was nearly perfect again from the floor. He hit 7 of 8 shots, the lone miss a 3-point attempt. He’s made 23 of 27 (85.1% ) and scored 61 points in 64 minutes in the past three contests.

“He’s got great footwork, great hands, a variety of ways to score,” Few said. “He’s hard to double because he doesn’t score in conventional ways, but I’m sure eventually we’re going to see more and more of that.”

The Zags kept it entertaining in the second half even as their lead sprouted to 44 points. Senior guard Aaron Cook soared for a two-handed slam to finish off a baseline drive. On the next play, he intercepted a pass and dunked left-handed over 6-foot-7 forward Ben Pyle, sending Gonzaga’s bench into orbit.

“I’ve known for a while he has some bounce,” said Nembhard, who finished with 12 points, three steals and two assists. “He kind of surprised me with that baseline one he boomed, though. That was tough. We were just all happy and having fun.”

Gonzaga has won 14 in a row against San Diego, the past four by an average of 36 points.