A GRIP ON SPORTS • Our television viewing plans for Saturday were blown away by a couple of unexpected occurrences. Literally in one case. But we persevered and had a great day anyhow. Not as good as Noah Williams, sure, but pretty fun.

• We planned on watching golf from Riviera all morning and some of the afternoon. But the Santa Ana winds, a not-so-common, late-winter phenomenon in the Los Angeles area, knocked those plans askew.

The day’s play was cancelled and we were left to either read a book or watch way more college basketball than we expected. 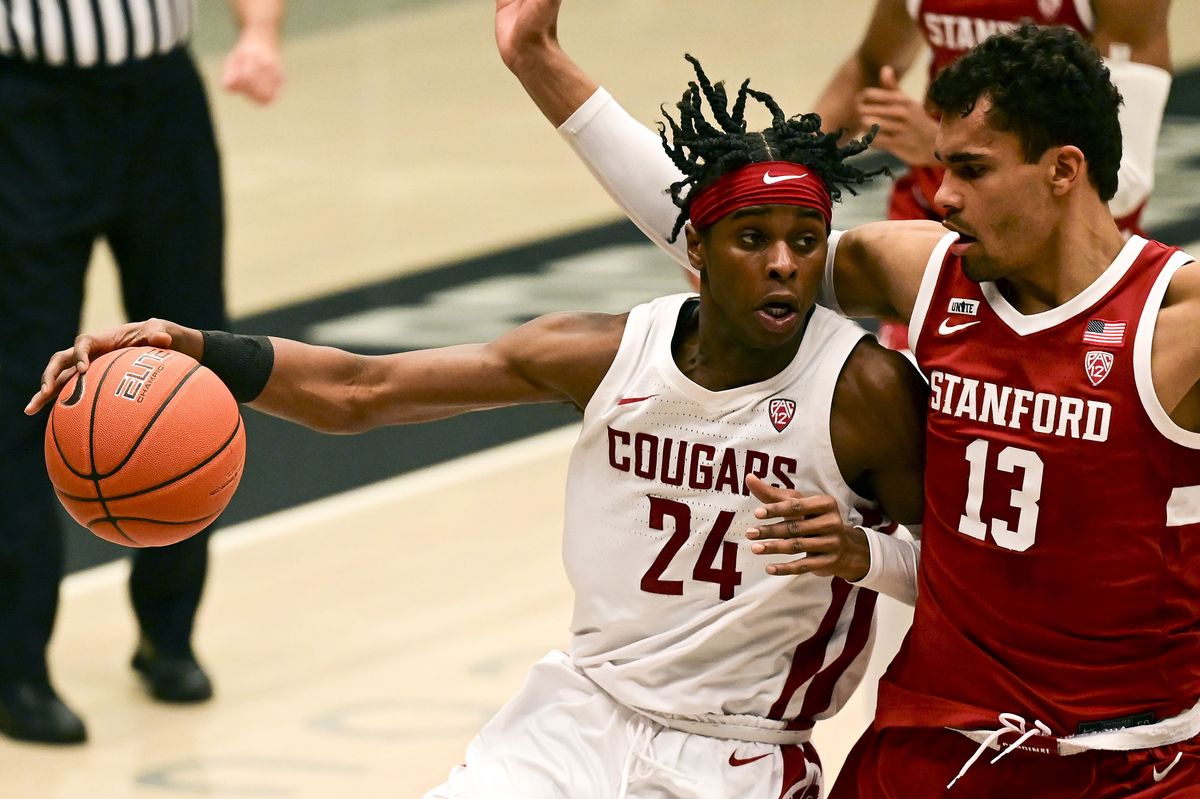 We did both, delving into another of the almost dozen books we received for Christmas, but we also picked up our hoops game.

We have to admit we were wrong. We didn’t think Williams could score as many as 32 points in two consecutive games. Stupid. The Cougars rode his 40 – yes, 40 – points to a triple overtime defeat of Stanford.

With Isaac Bonton unable to do more than say goodbye on Senior Day, Williams played a school-record 54 minutes and handled the Washington State offense in all of them. Not only that, for long stretches he was the only Cougar who seemed capable of putting the ball in the basket. That’s a lot to carry on his shoulders.

He did it. And defended. And rebounded.

Put that together with his now seemingly ho-hum 32-point performance against California on Thursday – just kidding; it was spectacular as well – he should earn his first Pac-12 Conference Player of the Week Award.

Unless Jaylen Clark wins it for his last-second free throw that gave UCLA a win over Arizona State. You never know.

• For the first time in years, the talk about how Gonzaga is hurt by the West Coast Conference’s weak competition makes more sense. Either that or the Bulldogs are exceptionally good. OK, both can be true – and are. 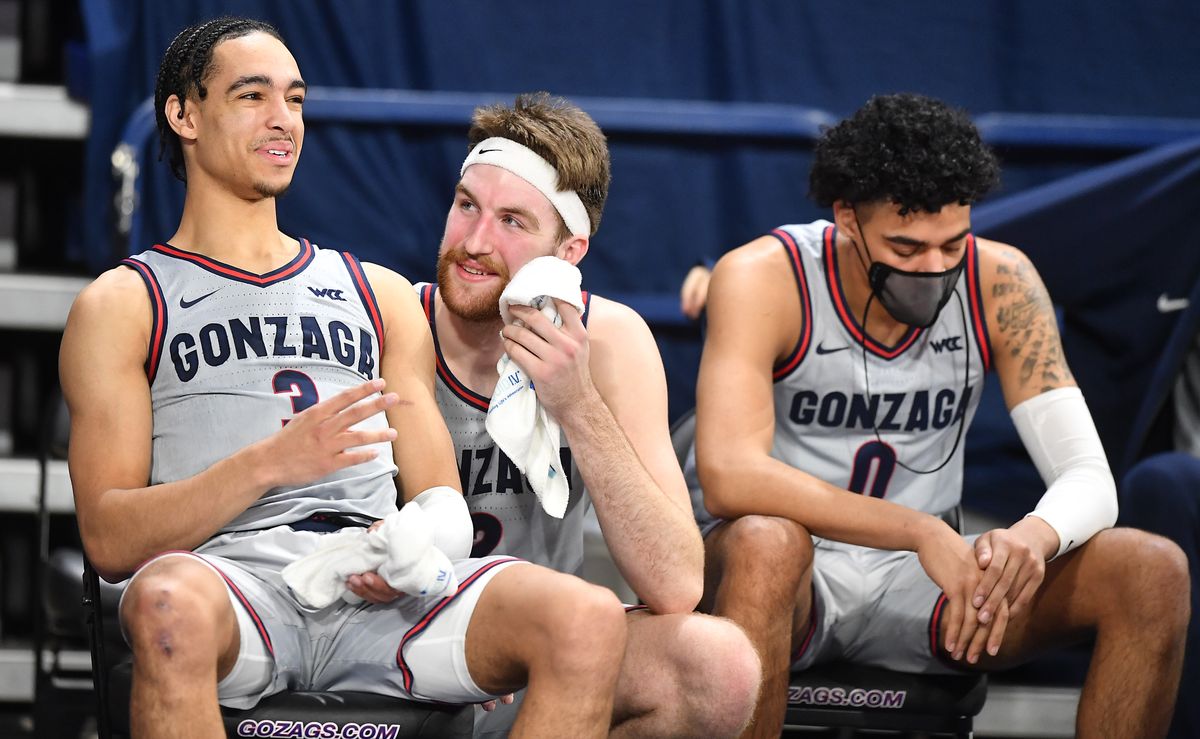 Still, this weekend’s games, neither of them ever in doubt, can’t have elevated the Zags’ execution under pressure. There just wasn’t any supplied by either Saint Mary’s or San Diego.

And, despite all the efforts from ESPN’s analysts Jay Bilas and Sean Farnham to explain how something good can come out of a 30-to-40-point scrimmage-like win, such games are not as fruitful as a test against a talented opponent.

In recent years, Gonzaga has been able to count on a handful of such exams sprinkled throughout the WCC schedule. Either BYU or Saint Mary’s or San Francisco or even Pacific would supply it. That really hasn’t happened this season.

Sure, it would take the best team BYU had to offer in the past decade, or Randy Bennett’s best squad in Moraga, to challenge the Zags in 2021. That’s not the case, especially when speaking of the Gaels. Which means Mark Few and his staff have to work their behinds off in practice and the video room to ensure small bad habits, especially on the defensive end, don’t blossom into bigger ones that better teams can harvest in the NCAA Tournament. Winning it is, as Farnham pointed out, the only goal that matters this season.

It’s not an easy task. And it’s made harder by the WCC’s lack of pushback this season. 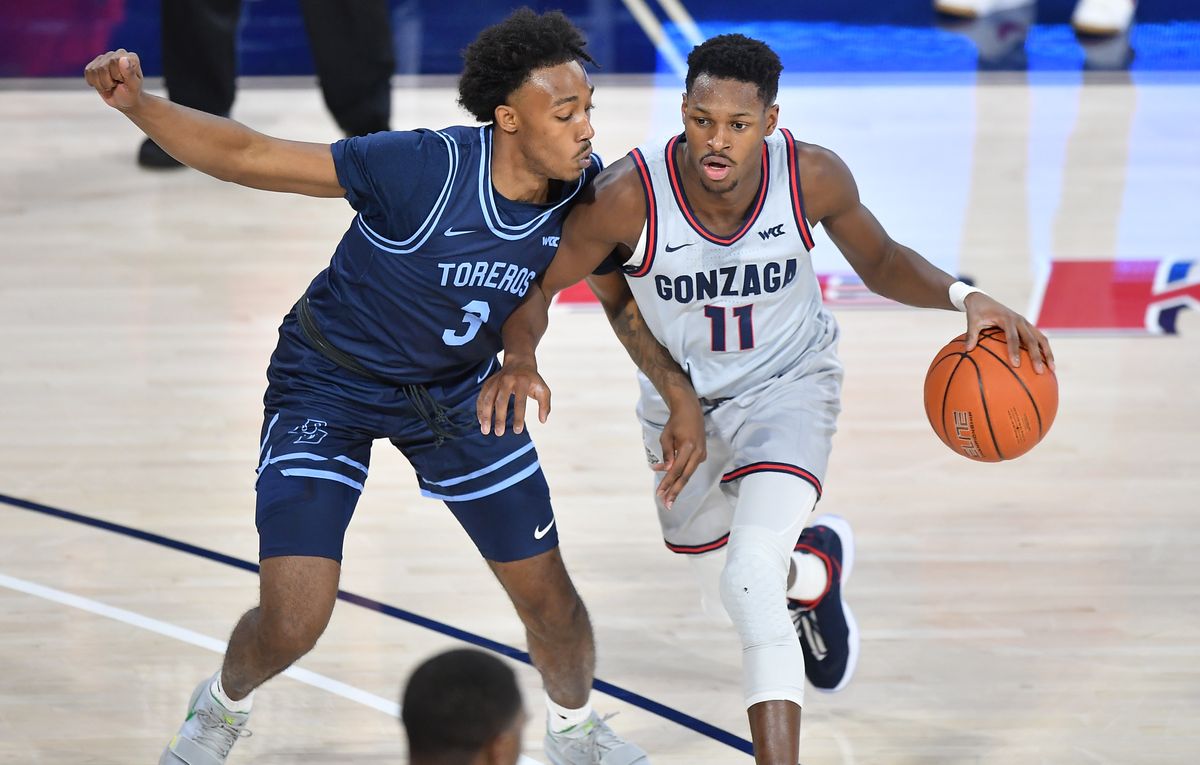 Gonzaga: Jim Meehan has his usual coverage, with his game analysis and the difference makers. … There is also a photo gallery from Tyler Tjomsland. … We added our TV Take which includes a call to boycott the Davenport. Not really. But we’re getting close. All it will take is another 17 references to a certain menu item and we’re organizing. That could happen next time Sean Farnham works a GU game. … There is also the usual recap with highlights. … The women bounced back from the loss at BYU with a 22-point win over host San Diego. Jim Allen has that story. … The baseball team is 2-0 this season after routing Kansas State in Arizona. … Elsewhere in the WCC, Pacific picked up a bounce-back win in Portland. … Using its bench liberally, BYU outmuscled Loyola Marymount, which isn’t the Cougars’ usual method of operation. 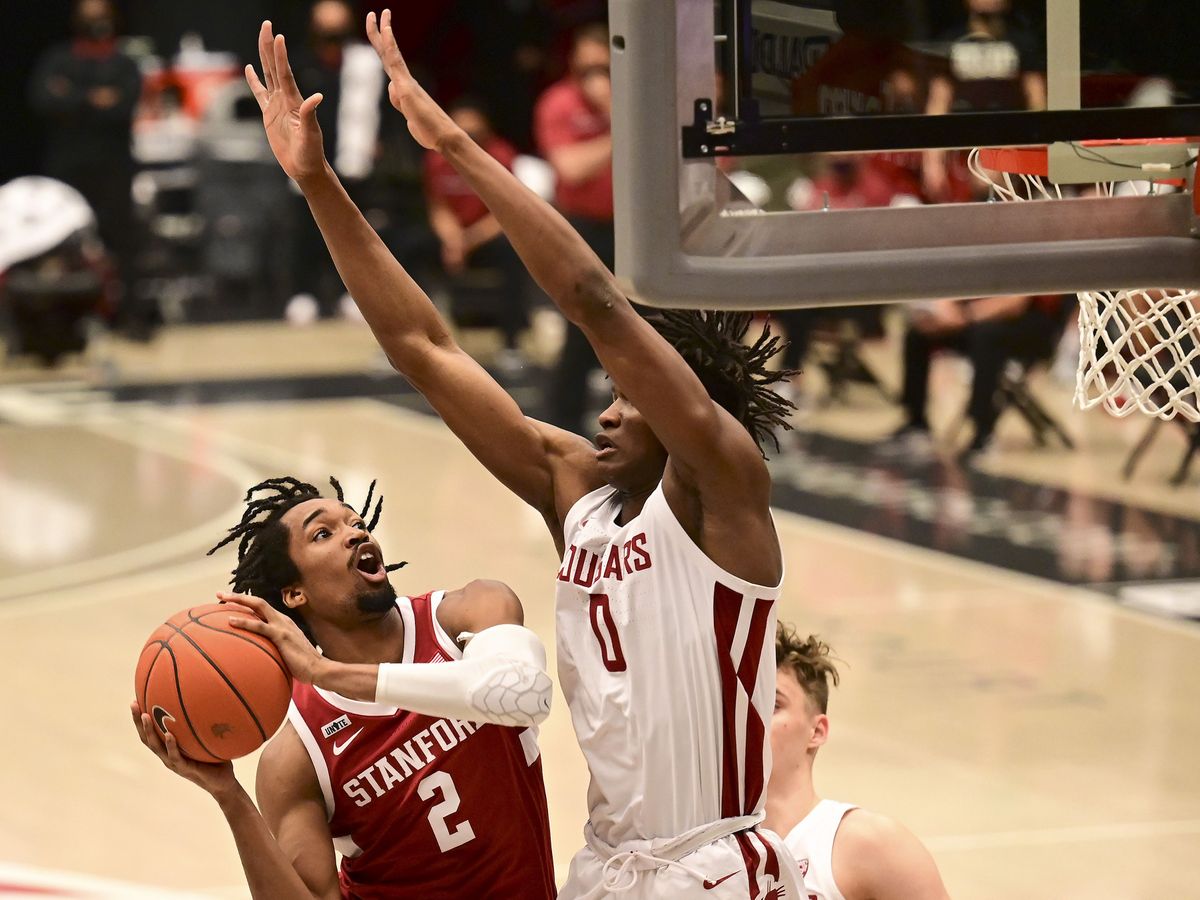 WSU: We have a question. It wasn’t a good loss for the Cardinal but how many times did the ESPN announcers have to hint losing to WSU would cost Stanford an NCAA at-large berth? More than once was too many and it exceeded that by a bunch. Theo Lawson has the game story. … Breaking 4 minutes in the mile is still an easily recognized, and respected, accomplishment. The Cougars had three runners do it in one race recently. John Blanchette delves into that achievement in his column. … Around the Pac-12 and college basketball, what type of day was Saturday? Odd. Not only did Washington win – OK, it was over California which has now surpassed the Huskies for the worst-in-conference designation – but USC lost. At home. To Arizona, which was supposedly just playing out the string for Sean Miller. It snapped a seven-game winning streak for Troy. … Another weird thing. Oregon defeated Utah when the Utes’ Timmy Allen was called for a double dribble as time ran down. The call made Larry Krystkowiak laugh in derision. … UCLA moved into a first-place tie with a one-point home win over Arizona State. … Colorado cracked down on defense and knocked off Oregon State. … Finally, there is a new law before the California Assembly that is about as misguided as any we’ve seen in a while. 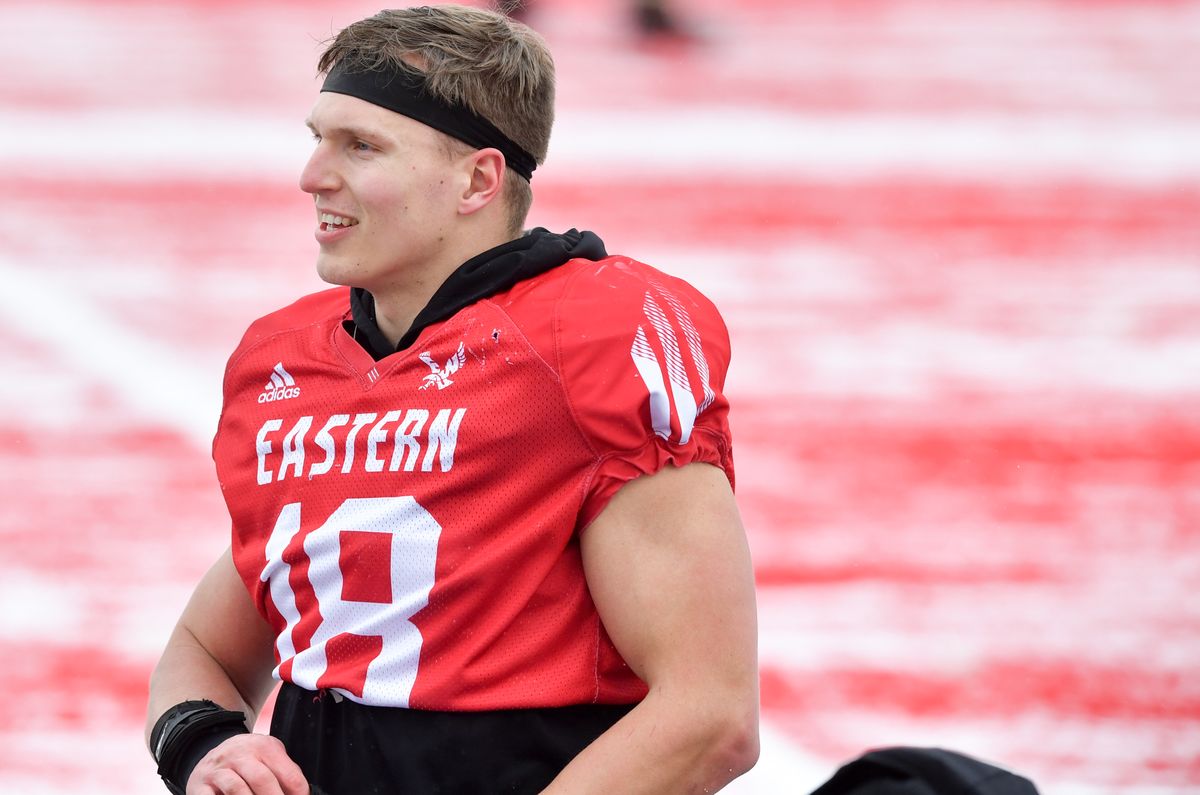 EWU: The game in Missoula was a lot like the game in Cheney, with Eastern Washington breaking out to an early lead. Then, in this one, the Eagles just kept piling on, finally finishing with another 90 points, though the Griz pulled closer against the reserves. Ryan Collingwood describes Eastern’s first sweep of Montana since 2003. … The Eagles are ready to begin Big Sky play. In football. In the middle of winter. Ryan has a story about their matchup with Idaho next Saturday through the eyes of transfer Ty Graham. … Elsewhere in the Big Sky, Southern Utah kept up with the Eagles (11-2) in the loss column, defeating Sacramento State. After all their COVID-19 issues, the Thunderbirds are 6-2 in conference play. … Weber State finished off a sweep of visiting Northern Arizona. The Wildcats are 9-3 in the Big Sky. … In football news, Northern Arizona, Weber State and Southern Utah are all looking forward to playing.

Whitworth: The Pirate football team raced past host Pacific Lutheran to start the season 2-0. … The basketball team also found a way to win at PLU. 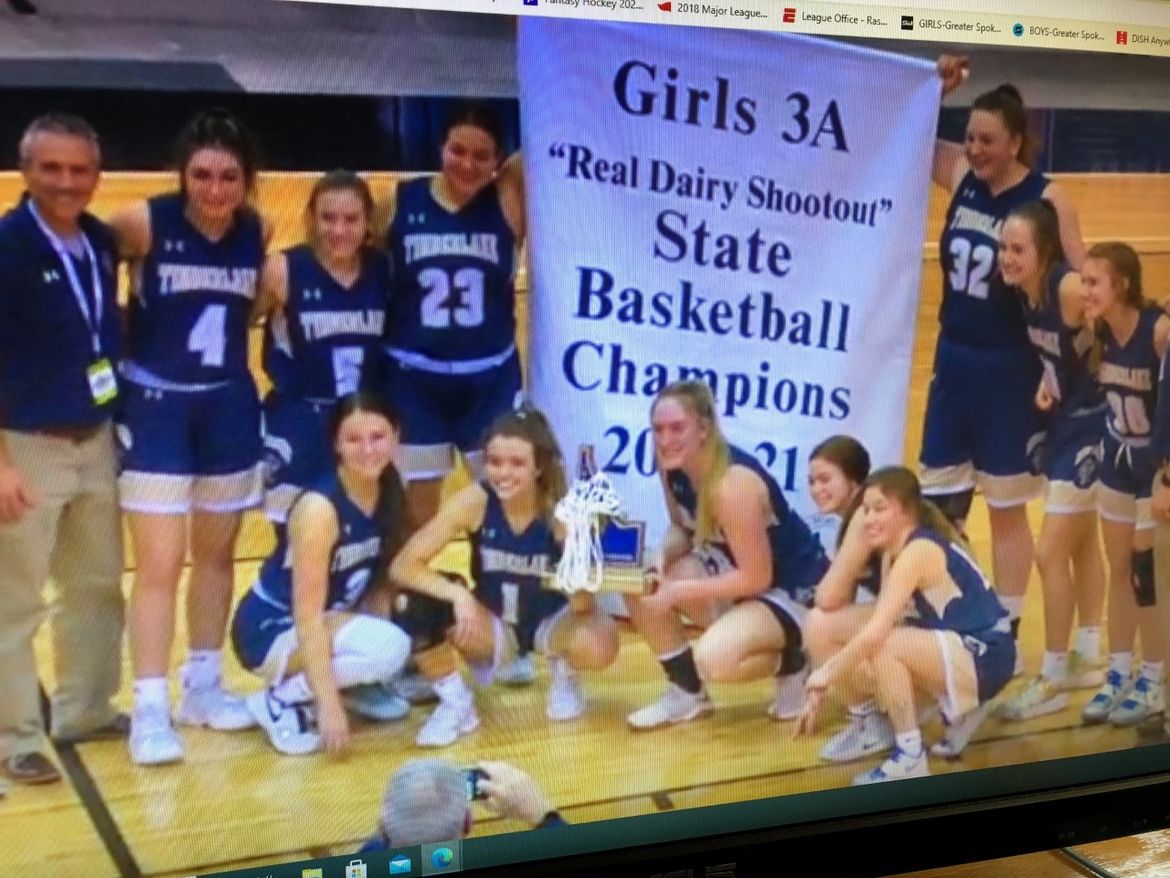 Mariners: Yusei Kikuchi is hoping for a breakout year after an offseason of hard work.

Sounders: it doesn’t look good for Jordan Morris. While playing for Swansea on loan, the Seattle star went down with a leg injury yesterday and was carted off in a brace. He will undergo an MRI today.

• Any plans for Sunday? We have decided to make clean-out-the-fridge omelets for brunch. I’m planning to have shrimp, salmon, spinach and pea pods in mine. Along with some cheese. It’s a way to get the most out of items we ate for dinner this week. I’ll tell you tomorrow how it tasted. Until then …