By Thomas Clouse and Emma Epperly The Spokesman-Review

A Spokane resident stood in the rain Wednesday with an AR-15 semi-automatic rifle strapped to his shoulder as a parade of President Donald Trump supporters rolled along Broadway Avenue waving flags, honking and yelling support for each other.

The motorcade of about 100 vehicles including a new Dodge Ram with dueling Trump flags and an older Ford Ranger pulling his “Trump Trailer” loaded with signs supporting Trump, Loren Culp and a hand-painted poster that read: “Sign if you Love Trump” written around a fist with a raised middle finger.

“I just wanted to come down and show my support for Trump,” said Zach, the man with the AR-15, who declined to give his last name. “The election was stolen. Everybody and their dog knows that.”

As the parade rolled around from place to place, the plan was to target news organizations, City Hall and eventually the Spokane County Courthouse with honks and demonstrations. It occurred about the same time demonstrators left a Trump rally in Washington, D.C., and stormed the U.S. Capitol as Congress convened to ratify election of Joseph Biden.

“I’m in a gray area about that,” Zach said about the storming of the Capitol. “I agree with what they are doing, but if they are breaking the law, I have a problem. We are a country of laws.”

After a several hour delay and calls from several elected leaders to intervene, Trump finally relented and called for his supporters to leave the Capitol.

“When I heard that, I was like, ‘What?’ ” Zach said. “I was surprised to hear Trump asked us to go home when he was the one who called us out.”

The mob included former state state Rep. Matt Shea, who spoke from under his umbrella.

“The fake news media President Trump rightly called the enemy of the people. I completely agree with this and I would say this: ‘Fake news go home,’ ” Shea said before leading the crowd in a chant.

A few moments later, Shea told a reporter to “get out of my face” and “back off” when asked for comment.

Kim Price, 63, said she helped organize the march to also highlight what she said is the damage being done to Washington by Gov. Jay Inslee’s orders to prevent the spread of the coronavirus. But, she was also there to support Trump.

“You’ll never convince me that the election wasn’t stolen,” she said. “And, it only happened in the swing-contested states.”

Asked why judges rejected virtually every legal challenge filed by Trump’s campaign, Price said the courts had done nothing to investigate hundreds of affidavits of alleged fraud.

Judges “just punted because they didn’t want to deal with it,” Price said. “That’s just my opinion.”

Like Zach, Price denounced violence at the U.S. Capitol on Wednesday.

Both she and Zach said they had friends from Spokane among the crowd at Trump’s rally in Washington, D.C., that later converged on the Capitol.

“What I heard was that Antifa and (Black Lives Matter) were infiltrating the crowd” and causing the violence, Price said, citing rumors with no evidence. “That’s what was going on. We want to let Trump know, ‘We support you,’ and Inslee, ‘Let us get back to our lives.’ ”

Among chants for “Protect Our Constitution” and “Four More Years,” 80-year-old Jim Gavras screwed a campaign flag onto the back of his truck as part of the “Stop the Steal,” supporting President Trump” protest.

“I’m 80 years old. (President Trump) has done more for this country than I’ve seen in all my life. And as a veteran, he gives me the energy to keep on going and not only fight for him, but he’s fighting for a country,” Garvas said. “So, I’m fighting for our country.” 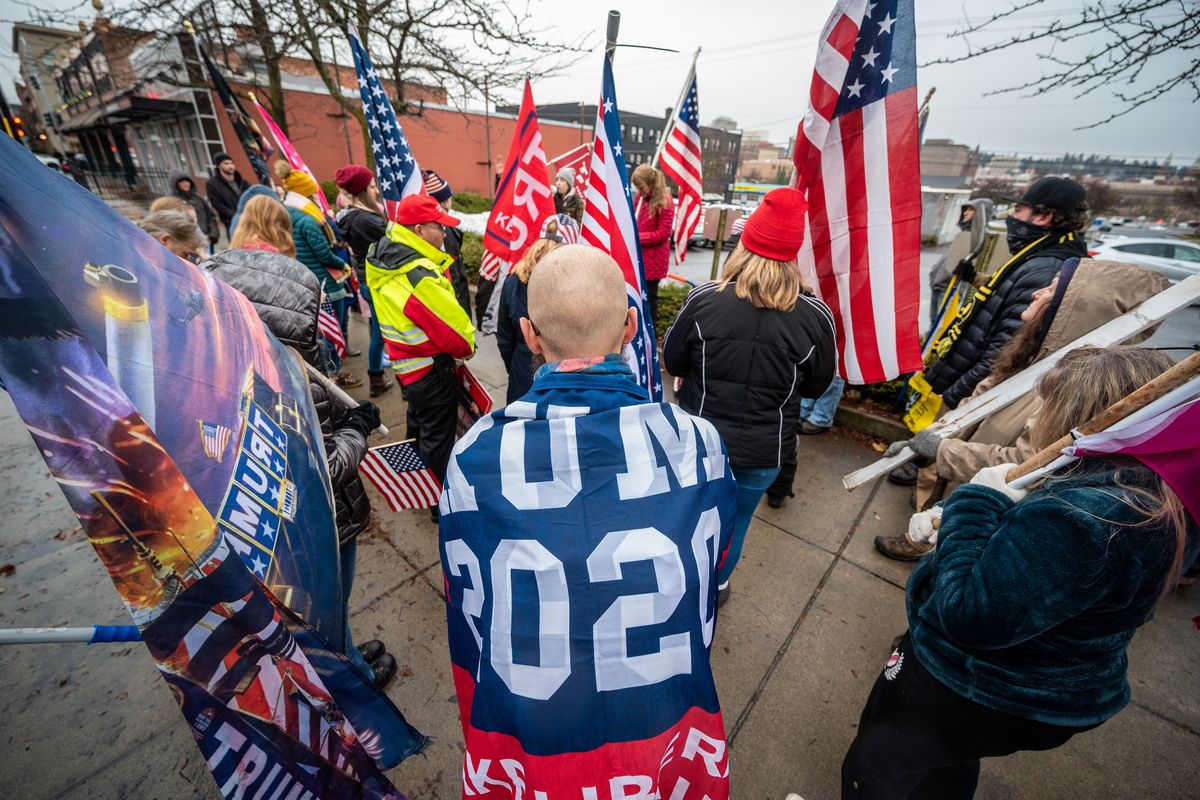 Trump supporters hold a prayer circle at the end of the Save the Republic, Stop the Steal rally, Wed., Jan. 6, 2021, on West Broadway across from the Spokane County Courthouse. (COLIN MULVANY/THE SPOKESMAN-REVIEW)

Tatyana Skripnik has been organizing “Trump trains” in Spokane for months, where supporters of the President drive in a caravan around town honking at other drivers and businesses.

“I’m out here because I would like to somehow just let my voice be heard that I want a fair election,” Skripnik said. “Either way that it goes, I want it to just be a fair election because that’s what our democracy is about.”

When asked how she felt the election was unfair, Skripnik said she had seen videos circulated online and heard ballots were being dropped off late and still counted, which has not been proven.

Skripnik said that even if they can’t make a difference this election, she hopes that continuing to be outspoken and politically active will help improve the election system next election.

“If not in this election, then the next election,” she said. “It would be nice to know that steps were taken to fix things like illegal immigrant voting, or just people who are not even citizens.”

There is no proof that a significant number of non-American citizens illegally voted in November and Trump’s claims of election fraud have been debunked and dismissed by state and federal judges, fellow office-holding Republicans and members of Trump’s White House.

Karen Gallion, one of the only masked demonstrators Wednesday, said she has been driving in a Trump train every weekend.

Gallion has lupus and is a caretaker for her ill mother so she has been doing anything she can to protect herself while also being politically active.

“I don’t trust Democrats,” Gallion said, adding that she considers herself a moderate.

John Kimlee held a sign that said “Dump Inslee” and wore a Make America Great Again hat as he wandered through the lined-up cars in the rain Wednesday morning.

“I came to America for freedom not to be controlled by the government,” Kimlee said, reflecting on his experience living in South Korea until the 1980s.

Kimlee believes that COVID-19 was used as a weapon to ensure mail-in voting would be widespread, a conspiracy theory that is not backed by evidence.

“I came out today because of the election. It has been rigged,” Kimlee said. “They used this coronavirus as a hit to scare us all into mail-in voting. We know that this was a planned attack.”

As the number of cars arriving slowed, people gathered in front of the staged vehicles to listen to event organizers speak. Less than a handful of people wore masks.

Former Spokane Valley City Councilman Caleb Collier, from the John Birch Society, addressed the crowd as a black pickup with orange flames emblazoned on the side roared into the parking lot and joined the other awaiting vehicles.

“We will not accept Joe Biden and Kamala Harris as our elected leaders, will we?” Collier said.

The crowd cheered back, “NO!”

Before cars embarked on the protest route, Price, the organizer, asked everyone to follow traffic laws and be respectful. The crowd then said the Pledge of Allegiance before the caravan embarked.

As the cars pulled out of the arena parking lot, about 10 people stood with small signs saying “Black Lives Matter” and anti-Trump statements.

Rio Alberto said he heard about the Trump protest at about 10 a.m. and as a volunteer at the Civic Theatre he wanted to show up and make it known that not everyone in Spokane or from the Civic Theater agrees with the Trump supporters.

As a Chicano-American, Alberto is frustrated that after so many people of color, specifically Black Americans, came out to vote, Trump supporters are saying there was fraud.

“It’s like why are you telling me that my vote doesn’t matter?” Alberto said. “Just because historically my parents or my grandparents were taught that their vote literally doesn’t matter because they didn’t have the right to do it.”

As the Trump train drove through downtown, approximately three dozen people, including members from Covenant Church in Spokane, gathered outside of the federal courthouse downtown for a peaceful demonstration. As nearby security officers looked on, the group rallied to sing and pray before marching around the block.

“We are here praying for our nation because we believe the nation is in a great crisis,” said Elizabeth Hug, a Spokane resident.