A GRIP ON SPORTS • Disappointing. Discouraging. Disastrous. Of all the “d” words we could use after the Seahawks’ disheartening showing yesterday in their 30-20 playoff loss to the Los Angeles Rams, known is more apt than disgusting.

• Maybe the “d” words aren’t enough. Maybe the only correct word to use in this circumstance is an “f” word. You know. Failure. 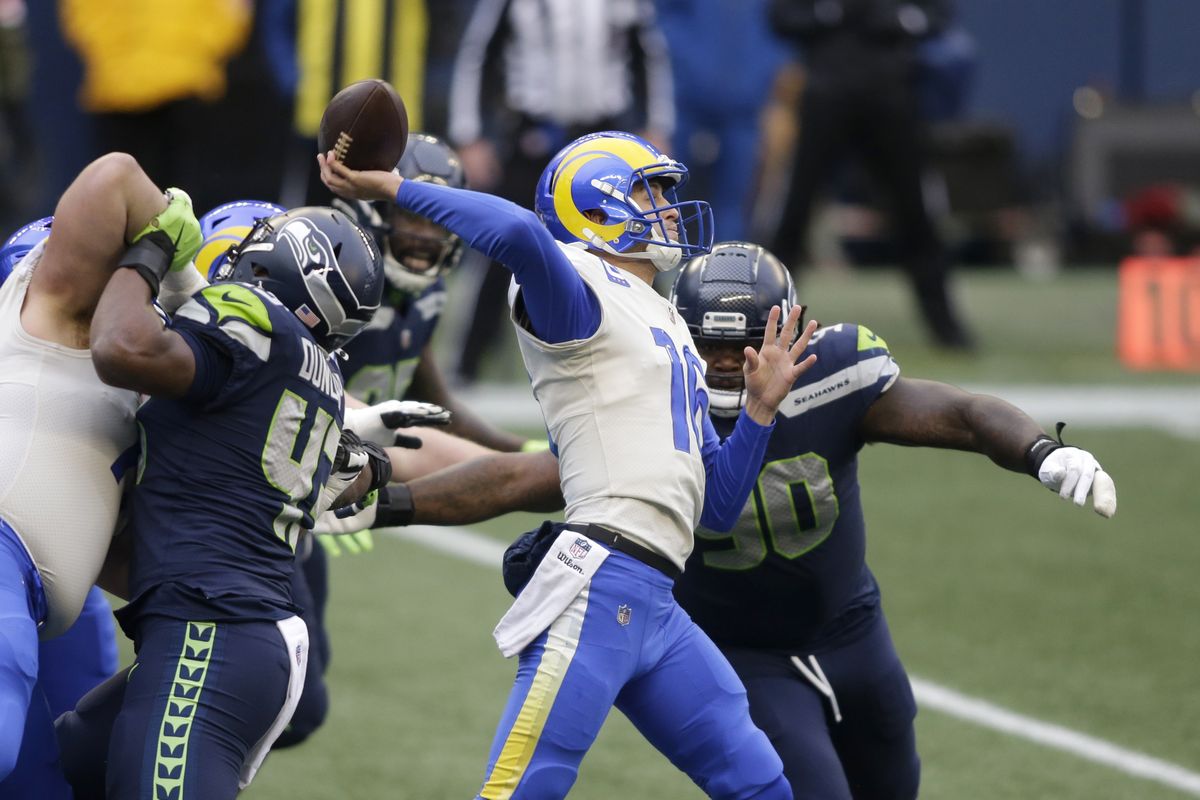 Jamal Adams has only been in Seattle long enough to get through the drive-through line at Starbucks a handful of times, but he encapsulated the fans’ thoughts perfectly yesterday.

“To me, it’s a failure,” the safety told the postgame media, including our John Blanchette, assembled on a Zoom call. “It’s not about individual goals or anything else. It’s about getting to the Super Bowl and winning it. One positive you can take from it is hanging a banner – we did win the division – but at the end of the day, we knew what our mission was and we fell short.”

There has been enough success in Seattle since Pete Carroll’s extended run that anything less than winning the NFC has felt, well, lacking. Which means the Hawks have failed over and over and over again since that ill-fated pass in Super Bowl XLIX.

And that was almost six years ago now.

The hard part of this season was the promise it held. Russell Wilson was the MVP frontrunner for more than a month. The offense was Denver Broncos, circa 2013, good. The defense sucked, sure, but a few well-timed deals seemed to have fixed that, even if the cost in future draft capital was high.

If the goal is to win the Super Bowl, than it was worth it.

A 12-4 regular season ensued. But there were warning signs. Big, flashing, there-are-people-crossing-here warning signs. The offense slowed down. An unexpected home loss to the Giants set off klaxons – and eventually cost the Hawks home-field advantage. The wins came, but they weren’t easy.

Neither was yesterday’s loss.

You could label the 10-point home loss a choke, but that wouldn’t be accurate. The Rams were the better team yesterday. Better up front on both sides of the ball. Better coached. Better prepared. Better at making plays. And Wilson, circa late 2020, hasn’t been good enough to overcome the shortcomings. Neither is Bobby Wagner on the other side of the ball. The two stars were dimmed.

Which leads to an offseason of questions whether there is enough voltage around them to power Seattle on one last playoff run.

Yesterday evening it sure didn’t seem possible. After a night of pondering the question, it still seems remote without major changes, something it’s hard to imagine Carroll wanting to make.

Which brings us to our last word on the matter. To find just the perfect one, we flipped through the thesaurus for hours until we find exactly what we wanted. The one word that perfectly encapsulates how this season of such promise ended. 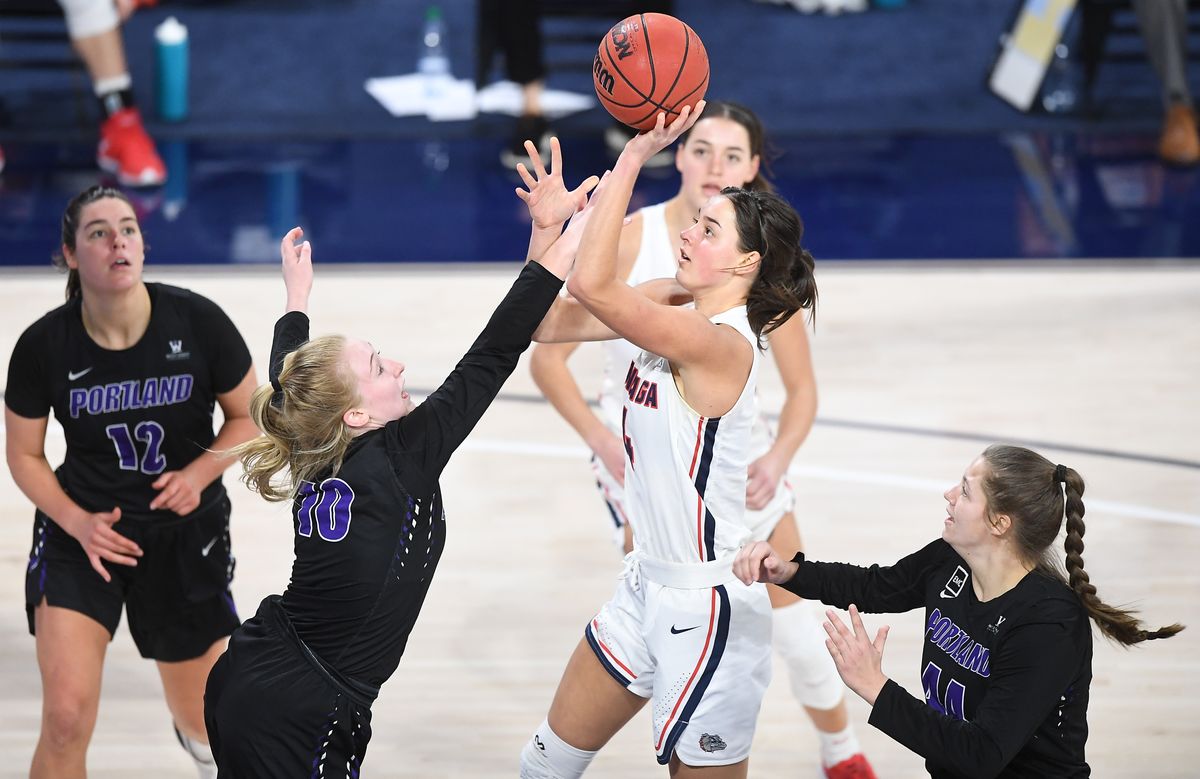 Gonzaga: No starter played 30 minutes. The Zags shot less than 25 percent from beyond the arc. Portland hit 13 3-pointers. And yet the No. 1-ranked Bulldogs were never threatened in last night’s 116-88 victory. In fact, the only thing that scared me at all was a chair sitting next to one of the baskets. It is usually occupied by a camera operator, but with the cut-rate broadcast from the WCC, it sat empty all game. And seemed like an injury cause waiting to happen. That would have made Jim Meehan’s day tougher than it needed to be. As it was, he put together his game analysis and the difference makers, the latter headlined by Joel Ayayi’s headline-worthy triple-double performance. … We watched at home and added our TV Take. … And there is the usual recap with highlights. … While the Hawks were flying out of the postseason, the GU women were flying by Portland, romping 75-43 in the Kennel. Jim Allen has the game story and Tyler Tjomsland has a photo report. … Elsewhere in the WCC, there was a big upset last night as Santa Clara hit a late shot and held on to edge Saint Mary’s 66-64 in Moraga. 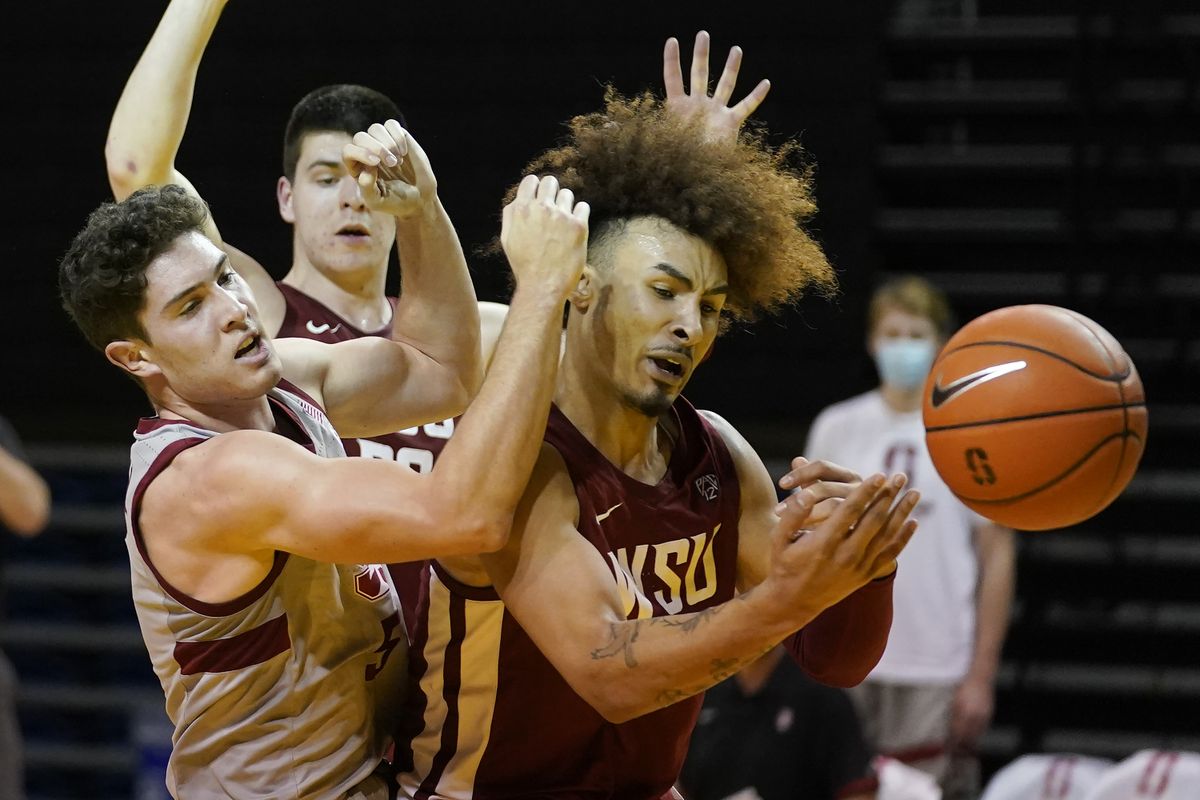 WSU: Here it is the middle of January and the biggest story to come out of Pullman has to do with football. But that’s to be expected when the Cougars’ most (or second-most) talented player announces he’ll return for another season. As Theo Lawson relates, running back Max Borghi is coming back. It’s a little unexpected, but probably not unrelated to his missing much of last season with an undisclosed injury. Now let’s see what Abe Lucas decides to do. … The men’s basketball team was in Santa Cruz yesterday, trying to sweep its Bay Area trip. Stanford wasn’t going to let that happen, pulling away late for a 75-60 win. Theo has that story as well. … Around the Pac-12 and college basketball, for the first time ever, USC and UCLA went 4-0 on their trip through Arizona. No “since …” stuff. Nope. Ever. Arizona and Arizona State joined the conference in 1978, the year I graduated college. I am 64 years old. You really do see something new every day. The Bruins and Trojans are at the top of the standings. … Washington lost again, at California. Will the Huskies win another game? … Oregon was down double digits at halftime. The Ducks rallied and handed Utah a tough-to-take loss. … McKinley Wright IV is about to set an assists record. … In football news, Oregon State is making good use of the transfer portal. … A key linebacker is returning for Utah. … The headline could read: “Senior retires to Arizona.” But it’s more important than that. … Arizona State has positives from which to build. 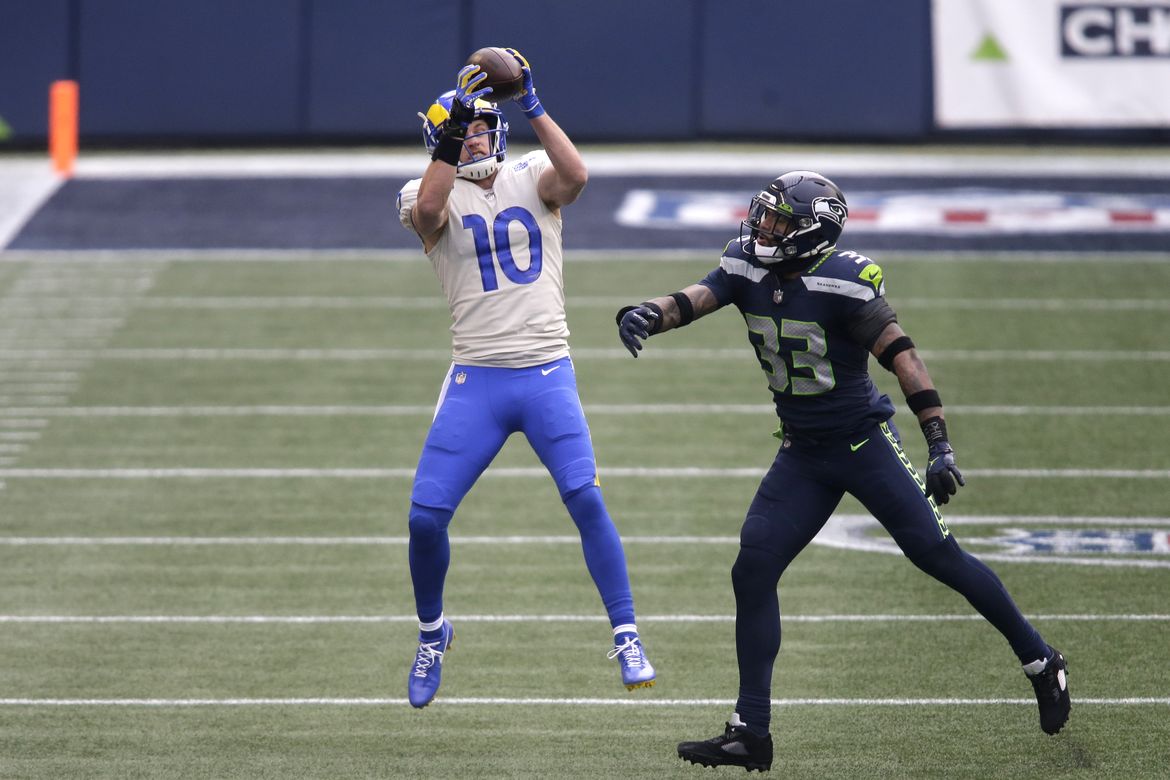 EWU: If you are an Eastern Washington football fan and a fan of the Seahawks, yesterday was a tough day. Ryan Collingwood understands. And he wrote this story about it. … Ryan also wrote about a good deed from Taiwan Jones, who played for Eastern a long time ago. … The Eagle women won another basketball game. They are on a roll. … Elsewhere in the Big Sky, sweeps seem to be all the rage. Montana State did it to Northern Colorado and Idaho State did the same to Northern Arizona.

Idaho: The Vandals’ losing streak to begin the season reached nine games with a 83-67 defeat at Southern Utah.

Whitworth: The Pirates put a scare into Montana in the first half before the Griz pulled away for an 84-67 victory. 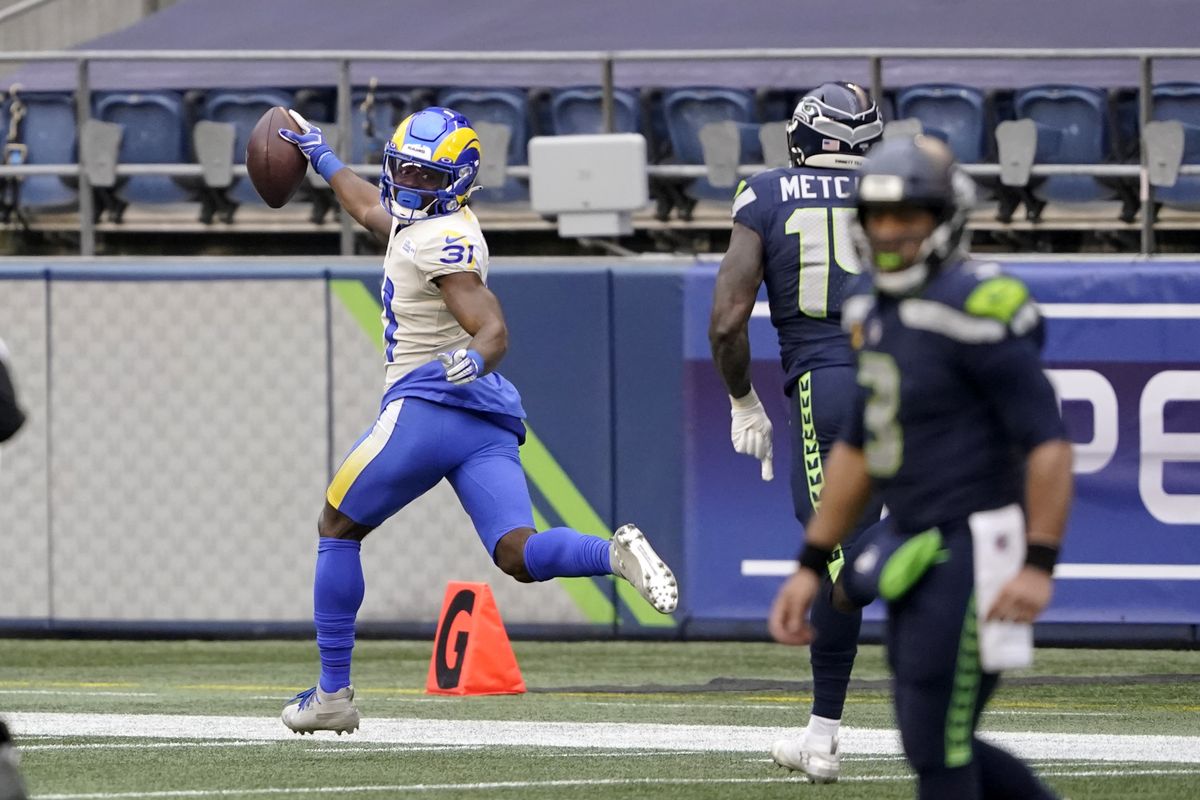 Seahawks: John watched the Hawks’ loss. He not only saw the result but the warning signs the result made clear. … The future is anything but clear for many Seahawks, including the leader of the front office. … The team’s failure leaves most fans with a bad taste in their mouths. The same could be said for the coaches and players. … The offense flat-lined the second half of the season – and the second half of a lot of games. … The Rams saw Seattle celebrate its division championship last month. It helped keep them focused Saturday. … Jamal Adams played with a torn labrum. He’s headed to offseason surgery. … There are always grades.

• It was a tough day. No, not just because the Seahawks lost. That in and of itself wouldn’t be all that bad if not for the game’s placement smack dab in the middle of our Saturday. It made it hard to follow the Washington State men’s game, the Gonzaga women’s game and, as it finished up, the beginning of the GU men’s contest. Instead of having a long, sports-filled Saturday, everything was compressed into a tight window. That was disappointing. Until later …