SEATTLE – Waking up to news of Hank Aaron’s death Friday morning was a jolt straight to my baseball heart. A little piece of my childhood died right along with him.

Each is a blow, and each evokes poignant memories of greatness in his prime. But Aaron’s death, at age 86, hits home differently. The sorrow is deeper, more raw. To kids of my generation, the ones who discovered the game in the 1960s and never let go, Aaron soars above them all, the icon of icons.

Perhaps only Willie Mays, of all living players, breathes that same rarefied air, although in my personal pantheon of sports heroes there’s a place for Sandy Koufax, too.

Aaron, however, always stood first and foremost, alphabetically and in baseball stature – especially when our family moved to Huntsville, Alabama, in 1971 as part of my father’s work in the space program for NASA. There I was practically in the neighborhood as Aaron approached the hallowed home run record of Babe Ruth.

I was only partially aware at the time of the racist abuse Aaron had endured as he edged ever closer to the Bambino. The grace with which he handled that disgusting element of the home run chase added enormously to Aaron’s legacy.

Throughout his life, he was an advocate for racial equality, a champion of civil rights and became, in his life after baseball, as renowned for his humanitarianism as he had been for his ball playing. And, bookending the home run record, Aaron would exude the same grace years later when the steroids-tainted Barry Bonds shot past his ultimate home run total of 755 – and Aaron’s legacy merely grew by virtue of the juxtaposition.

All I knew as a teenager in Huntsville in 1973 was that my idol was closing in on the most cherished mark in all of sports, Ruth’s 714 home runs. That number had heft. It had resonance. It meant everything in a way that can’t even be imagined nowadays, especially being in the middle of the deep South.

As I wrote in a tribute to Aaron in 2006, when Bonds closed in on his mark, I invested my heart and soul into his quest for 715. I listened each night to Braves games on a transistor radio, not letting myself go to sleep until Aaron’s final at-bat. I built my own shrine to Aaron in my room – posters, memorabilia, baseball cards, programs. I even logged his home runs on a chart that was printed in my local newspaper, the Huntsville Times. 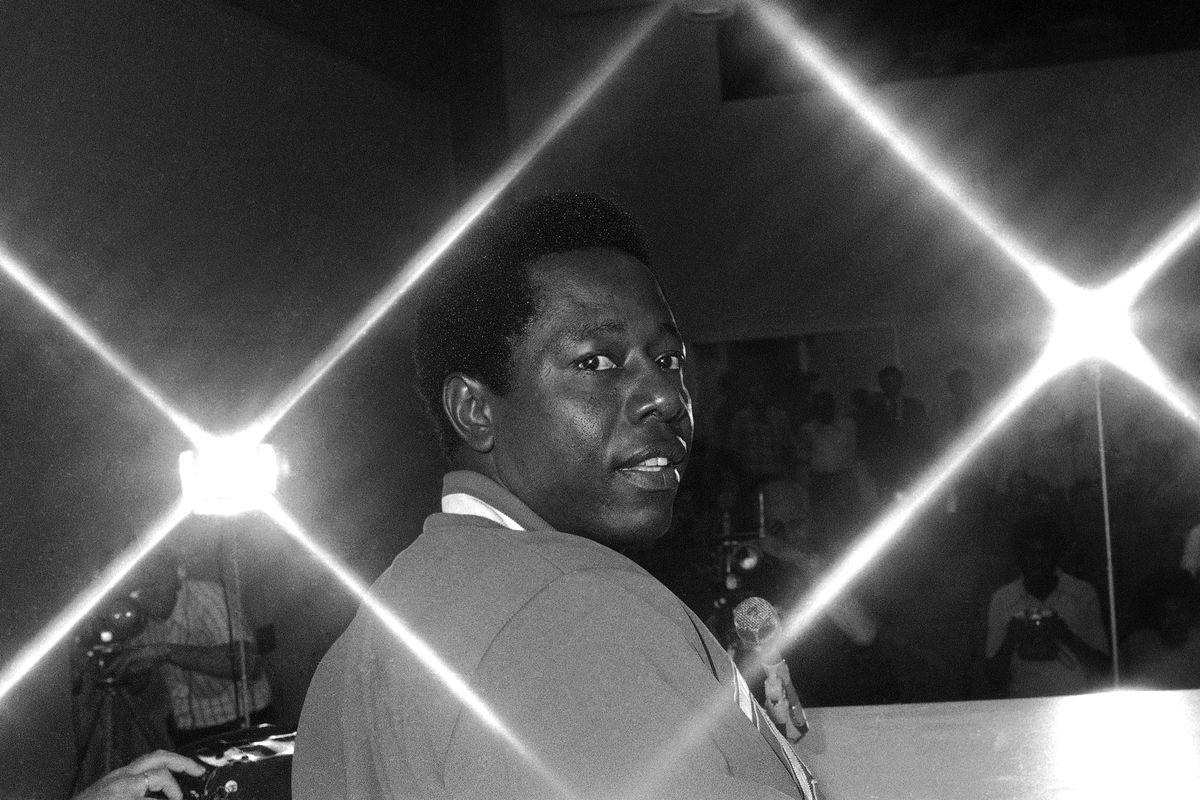 Atlanta Braves’ Hank Aaron looks on during a 1974 news conference in New Orleans. Aaron, who endured racist threats with stoic dignity during his pursuit of Babe Ruth but went on to break the career home run record in the era before steroids, died early Friday at 86. (Associated Press)

I also cajoled my parents into buying tickets to the Braves’ final homestand in 1973, realizing we had a chance to witness history and were too close not to seize it. We made the 3½-hour drive from Huntsville to Atlanta to watch the Braves play the Astros at Fulton-County Stadium on Sept. 30, 1973 – the last game of the year. I was wild with excitement at the prospect of seeing history.

Aaron had hit his 713th homer the previous night, so this would be his final chance to tie or even surpass Ruth before the offseason. As he told reporters in the Atlanta Journal-Constitution newspaper that I have saved for 46 years, “If I get a pitch to hit, I’ll show the world whether or not I’m a good hitter. If I don’t hit it tomorrow, it’s going to be a long, cold winter.”

Aaron would get three hits in four at-bats against the Astros that day to bring his final average, at age 39, to .301. My dad attempted to record each Aaron at-bat on our primitive movie camera, just in case. Somewhere in our family archives are the fuzzy, jumpy results. But, alas, no home runs, so maybe Aaron’s winter was indeed long and cold. All I know was that mine was marked by impatience to get the 1974 season started.

Aaron, of course, would hit No. 714 in Cincinnati on opening day of 1974, and then No. 715 off the Dodgers’ Al Downing four days later in Atlanta. It remains one of the signature moments in the entirety of not just baseball history, but sports history, and you can probably recite Braves broadcaster Milo Hamilton’s epic call right along with him. Unless you lived through it, it’s hard to wrap your brain around how much this moment consumed the country.

As I ventured into the baseball world as a reporter, I was lucky enough to have brief glimpses of Aaron, such as when I covered the unveiling of the “All-Century Team” in 1999 and Aaron shined brightest even in a banquet room full of luminaries. In 1993, when Aaron’s old teammate Dusty Baker became manager of the team I was covering, the San Francisco Giants, I contacted Aaron through the Braves to get a comment. For years, I saved the message on my answering machine of Aaron returning my call while I was out. You can’t delete royalty.

Listening to Baker weave stories and anecdotes about Aaron – which he did frequently and happily – was one of the perks of covering the Giants. Each time I covered the World Series, I made sure to attend the ceremony for the Hank Aaron Award, even when I had no plans to write about it. I just wanted to soak up the aura of Aaron.

The aura of Aaron. That’s really what it comes down to. I hope people don’t just fixate on the home run total, because Aaron was so much more than that. Throw out the 755 home runs, and he still exceeded 3,000 hits. No one in the history of the game drove in more runs. No one had more total bases – by a margin of 722 over runner-up Stan Musial. That’s 64,980 feet, or 12 miles more bases by Aaron than anyone else. And he was a superb base runner and defender. It’s hard to fathom, but as celebrated as Aaron has been, he was still underrated.

Yet numbers don’t tell the whole story, either – even the greatest set of pure numbers in baseball history.

Ruth is a cartoon figure, a caricature. Bonds holds the record at 762 home runs, but for many he will never be regarded as legitimate. It is Aaron who still looms as the Home Run King, no matter what the record book says.

That legacy will last forever. So will the dignity with which Hank Aaron conducted his life. And at a tragic moment, I’m happy to say that the aura of Aaron lives on.