Christy Harbison and her boyfriend, Mike Sandblom, had been talking about marriage before the couple bought her childhood home last fall.

Then in November they fell ill with COVID-19.

A stay in intensive care at Providence Holy Family Hospital in December convinced Sandblom the time was right. He called Harbison after watching nurses wheel out a patient who had died.

“It was a surreal moment,” said Sandblom, who’s now recovering in the couple’s home in Mead. “So I asked, ‘Will you marry me? Because in case I do die, I wanted to at least ask you to marry me.’”

Sandblom, 52, was released from the hospital before Christmas and still was using supplemental oxygen when the couple went to a local jewelry store to pick their engagement ring.

Within two weeks, Harbison noticed COVID-19 symptoms that soon became severe. She was admitted to Providence Sacred Heart Medical Center on Dec. 31 and later was moved to the ICU.

“Going in, not knowing if I was going to wake up,” Harbison, pausing now and then, said from her hospital bed earlier this month. “Knowing that we had that special moment, you know? It was pretty special.”

During her stay, she struggled to catch her breath, and though her family urged her to fight and stay off a ventilator, the time came when the 51-year-old decided it was time. 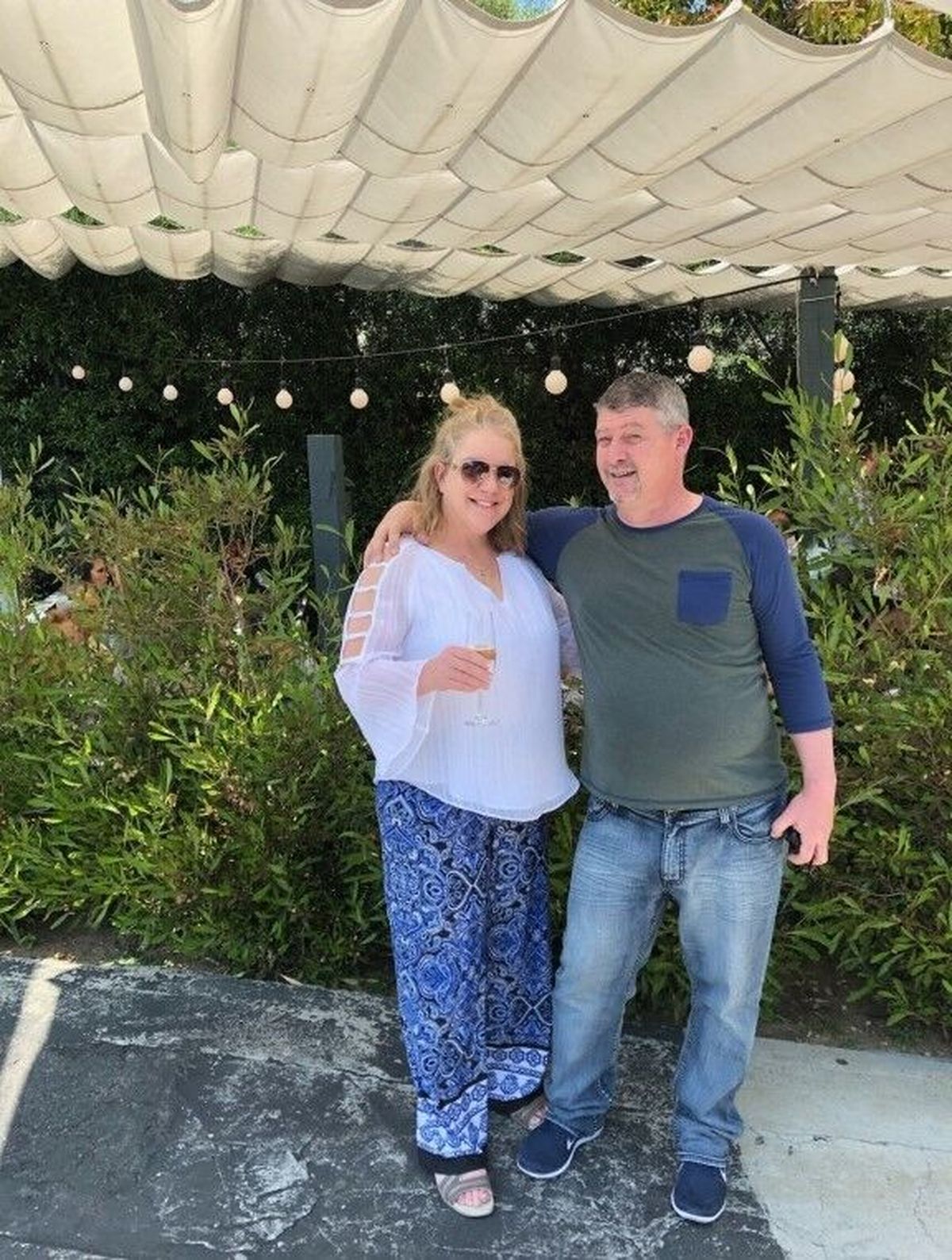 Christy Harbison, left, with her now-fiance Mike Sandblom celebrating Harbison’s daughter graduating from the University of Southern California in 2019. The couple contracted COVID-19 in November and both spent stints in the ICU.  (Courtesy Christy Harbison)

Harbison’s infection two months after an initial positive diagnosis puzzles members of her care team at Sacred Heart, one of many mysteries that doctors, nurses and therapists have tried to crack in real time as they’ve watched hundreds of people become infected and require hospital care. The Centers for Disease Control and Prevention reported in October that patients whose immune systems are compromised may remain infectious for about twice as long as otherwise healthy people who contract the virus.

Sandblom has been diagnosed with chronic obstructive pulmonary disease, or COPD, while Harbison is on medication to stop the progress of multiple sclerosis in her body. That disease requires Harbison to take drugs that suppress her immune system to keep it from fighting healthy nerve tissue, which doctors believe may also be contributing to her long illness from COVID-19.

“That was one of the things they said was part of my difficulty recovering from this secondary infection, or whatever it was,” Harbison said.

Reinfection is unlikely. The CDC reports that contracting the virus a second time is rare within a 90-day window of the first infection, based on international studies.

Dr. Bennett Gladden, a hospitalist who has treated many COVID-19 patients at Sacred Heart, said he’s seen long-term infections from other immunosuppressed patients. One man on such drugs experienced fevers for six weeks. Transplant patients, who are on immunosuppressant drugs in order to prevent the body from rejecting a new organ, also tend to experience more complications, Gladden said.

Harbison was recovering earlier this month in an area of the hospital built over a five-year period to treat especially infectious diseases. Known as the Special Pathogens Unit, this area of the hospital where patients brought to Spokane from a cruise ship were first treated in February 2020. It’s been converted to caring for COVID-19 patients, but could also be used for outbreaks such as Ebola.

The rooms are large, to accommodate patients as well as breathing machines and staff decked in personal protective equipment. COVID-19 is not what the unit was built for, but it’s ideal for coronavirus patients who can complete some tasks on their own, said Christa Arguinchona, manager of infectious disease prevention and the special pathogens unit lead at Sacred Heart.

“We need several floors to treat COVID patients,” said Beth Hegde, communications manager at Sacred Heart. Patients are primarily housed on two floors, in the intensive care unit, and in the Special Pathogens Unit, which looks out over downtown Spokane. Nurses can communicate with patients via cameras, and all the air is pumped out of the building through a ventilation system designed to prevent the spread of disease through the air.

The rooms are pressurized to prevent air from flowing out into the hallway.

On this day, Arguinchona met with Harbison to talk about symptoms and administer medication meant to improve lung function. She noted Harbison’s oxygen levels dipped when she moved from a chair to her bed, a simple movement that can leave coronavirus patients breathless.

“As she progresses, we’ll slowly see some improvement in that,” Arguinchona said.

When she leaves the hospital, Harbison will need steroids to fight the inflammation in her lungs, Gladden said. Patients are ideally released without needing supplemental oxygen, but sometimes – like in Sandblom’s case – they will, he said.

Sandblom already received oxygen at night as part of his treatment for COPD. He’s got two tanks at his home that require refilling, keeping him confined to the house while he waits for word whether he’ll be on oxygen long-term, requiring a wearable mobile unit.

The disease struck Sandblom, a caretaker for developmentally disabled adults, first as a severe headache, followed by a fever that wouldn’t subside. Tested weekly at his job, Sandblom had been seeking medical leave over concern the virus would spread just as he got sick.

“For six straight days, I had a fever of 103,” Sandblom said. “I had to take a Tylenol, or an Advil – I switched it up every two hours – just to keep my freaking fever down. And I was taking freaking cold baths.”

When Sandblom’s lips turned blue and his skin ashen gray, Harbison called an ambulance. Sandblom fought his significant other about going to a hospital.

“I was mad at her,” Sandblom said, laughing now with the advantage of time. “Because I was so scared, I knew my condition. I knew I might not come back from the hospital, so I was kind of growling at her a little bit.”

Sandblom also resisted being put on a ventilator, knowing from reading and watching news coverage of the virus that many who go on breathing assistance never come off. Nursing staff at the hospital said they urge patients who need a ventilator to speak with loved ones before the process of intubation, because it’s impossible to talk when on the machine.

Harbison was heavily sedated during her time on the machine, necessary because she felt like she was “breathing through a straw.” She recalls only trying to motion to nurses that she needed a sponge for her tongue, because her mouth was getting dry.

“When they took me off of it, I thought it had only been, like, half a day,” she said. “It was one of the nurses that said it had been three days.”

Arguinchona teared up behind protective goggles and mask when talking about Harbison’s demeanor following her stint in the intensive care unit. Patients sometimes go through the converted pathogens wing on their way to intensive care, other times on their way out of the hospital entirely.

“To see that light in her eyes, that hope in her face,” Arguinchona said, pausing outside Harbison’s room to collect herself.

It was an outpouring of emotion neither patient nor her husband-to-be witnessed. But they can identify with it, having been surrounded with seriously ill patients not to mention the news reports of hundreds of lives lost in Spokane, more than 400,000 nationally and more than 2 million people around the world.

“When the nurses took me out of the ICU, they said they were so happy because they don’t see success stories very often,” Sandblom said.

Patients and health care workers, because they’re isolated, are having to deal with the emotional toll of the pandemic on their own.

“I’m just in a room, by myself, counting the days until I get out of here,” Harbison said.

Days that could have been spent unpacking or planning a wedding.

Still, the couple knows, despite the prospect of weeks, months and years of close care that lie ahead after their stints in intensive care, they’re luckier than many thousands more.

“It’s not a good feeling. It’s like you are in a prison,” Sandblom said. “It’s just sad. People pass away and they don’t get to see their family one last time.

“It’s hard for me,” Sandblom said, choking back a sob. “But I can’t imagine, for them.”

Harbison was released from the hospital Monday after 20 days there. That matched Sandblom’s own stay of 20 days.

The couple is at home, resting, with “his and hers oxygenators,” Sandblom quipped. The couple celebrated the homecoming with pizza and a bedtime right around 9 o’clock.

“I gave her a big hug and a big smooch,” Sandblom said.