A GRIP ON SPORTS • Who is the most famous athlete you ever played sports with? Maybe somewhere out there, someone is answering that question with your name. And bragging about it. I am 100 percent sure no one is doing that with my name. 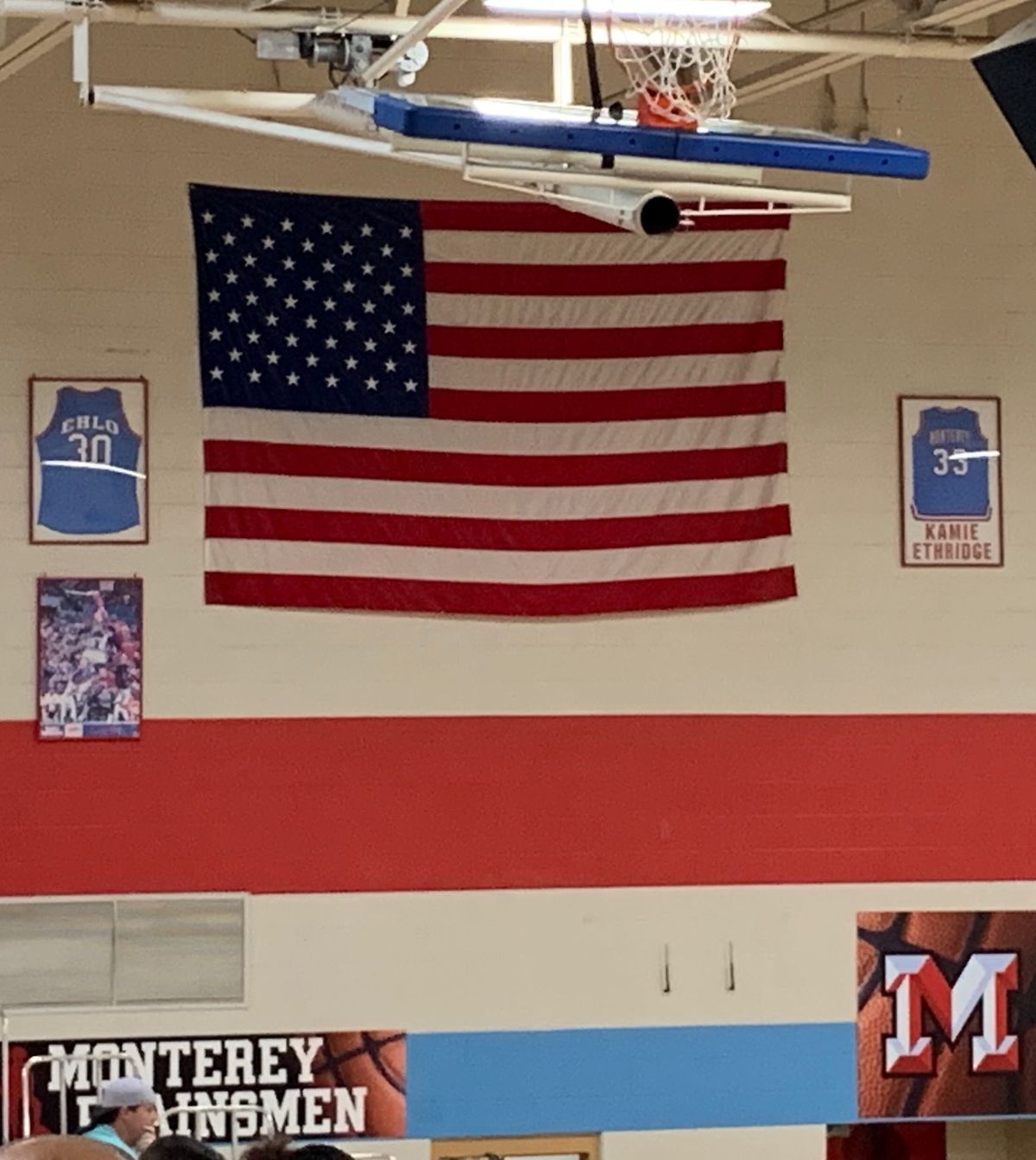 Pretty sure they’ve been unfazed by the recent weather, right?

Anyhow, there has to be quite a few folks out there who have sat on Lubbock bar stools or picnic benches over the years and regaled folks with their time spent throwing passes to Ehlo while they were at Monterey High. Or setting screens for Ethridge.

It’s what folks do as they age, reminisce about the past – see “Glory Days” from one Mr. Bruce Springsteen – especially when it allows them to shine in the reflected glory.

We have done it as well. Mainly about 35 years ago, when Matt Young was a member of the Mariners’ pitching staff. See, Matt and I grew up together in Sierra Madre, Calif., though I was two years older. His older sister and I were members of St. Rita’s Elementary School’s graduating class of 1970. Matt, who played on the Red Sox with me in Little League, followed two years later and headed over to my high school, St. Francis. Where he made the varsity as a sophomore.

He could always throw hard. Really hard. Probably somewhere in the 90s on today’s radar guns. Now, as a 16-year-old, did he always know where the ball was going? No chance. And, as his catcher, it was my job to somehow wrangle his wayward pitches.

When an early pandemic scan showed dark spots on my ribs, causing a cancer scare that lasted months, I didn’t think of Matt Young. But when the doctors finally realized those spots were bruises, more than likely caused by hard blows as a young man, I sure did. All those pitches in the dirt that I only kept in front with my chest. That had to be the cause.

Glory days, my … let’s write nose. That will work.

• For college athletes, glory days turned into money days as the calendar turned to July. Or at least they now have a chance to make that happen.

The NCAA’s emergency legislation that decided to scrap all rules about selling your name, image or likeness, went into effect. And every school in America moved forward with helping their athletes profit from the new order.

It is happening at all the local colleges and universities as well. Quickly. In fact, Theo Lawson has this story on Washington State’s “Cougar Pursuit” program.

When it comes to college athletes, these days of glory should be more lucrative for some.

• Yes, it is July 1. A good month in the sporting world is starting.

There are the major events from around the world, Wimbledon for tennis, the British Open for golf. Those happen every (non-covid) year. But this year we also can throw the Tokyo Olympics in the mix, which is not only fun but also can’t-miss TV.

Baseball has its All-Star Game. That’s an annual thing. The NBA finishes up its season. So does the NHL. Those two events are a little later than usual this year, but we don’t mind.

Heck, before the month is out, every NFL team will have started training camp. For the first time, they all have to begin on the same day, July 27, though the two teams (Dallas and Pittsburgh) playing in Canton can start earlier, as can Tampa Bay.

The next 31 days are going to be jammed. Which, considering how hot it is throughout most of the nation, is a good thing. After all, when we are stuck inside hoping the air conditioning will hold up, we need to be able to watch other people sweat as well. Isn’t that only fair? 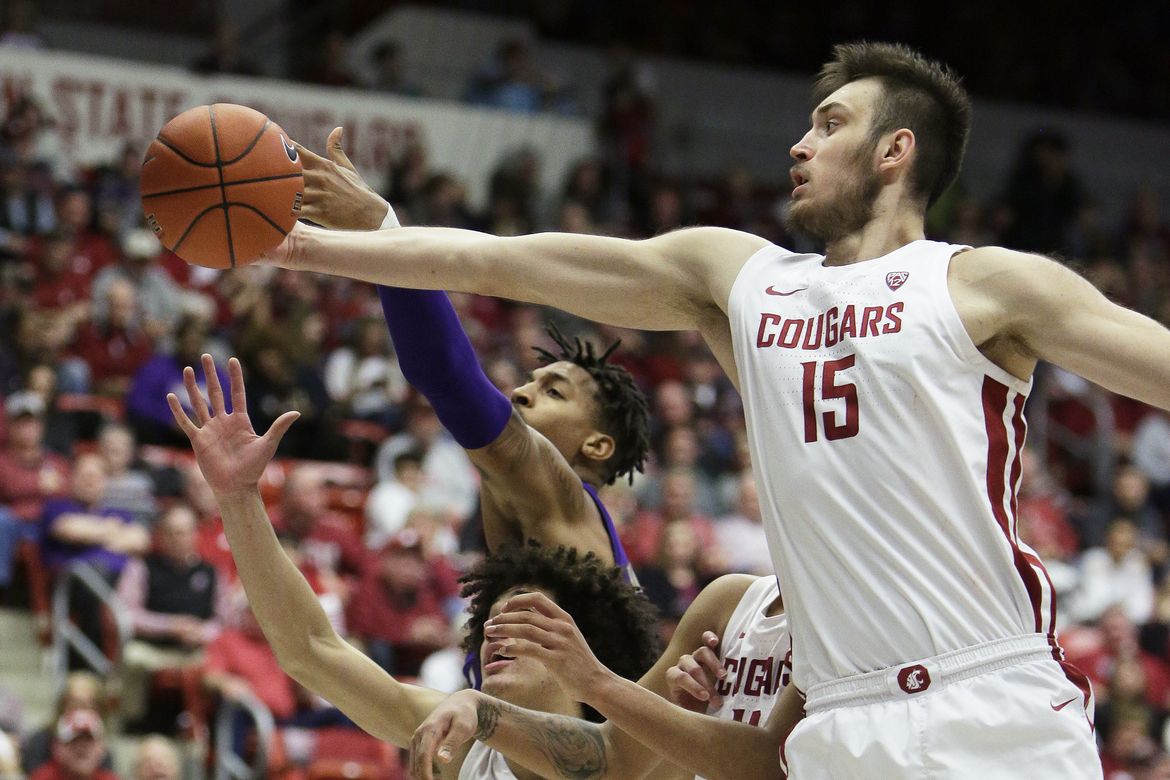 WSU: As we mentioned above, Theo has a story on the NIL process in Pullman. We also links stories below from other conference schools. … The Cougar basketball roster, in flux since the season ended, seems to have finally settled down with one more player, Volodymyr Markovetskyy, entering the transfer portal. Theo has that story as well. … Larry Weir opined upon the NIL and other things yesterday for the latest Press Box podcast. … Washington State facing off against Mississippi State in Las Vegas some September? It could happen. … Elsewhere in the Pac-12 and college sports, John Canzano has some parting words for now-former commissioner Larry Scott. … Washington is ready to help its athletes profit off their NIL. The same can be said about Colorado. … This revolution all began in the California legislature. Or maybe in a courtroom. … An early 1970s Oregon football star, Bob Newland, died Wednesday. … The Ducks can have full attendance in the fall. … Colorado’s new defensive coordinator was almost out of football. … Is Charlie Brewer going to be the Utah quarterback this season? … In basketball news, a Colorado grad transfer is hurt and won’t be available until the fall. … One Arizona player learned a lot in a short stint at the U19 tryouts. 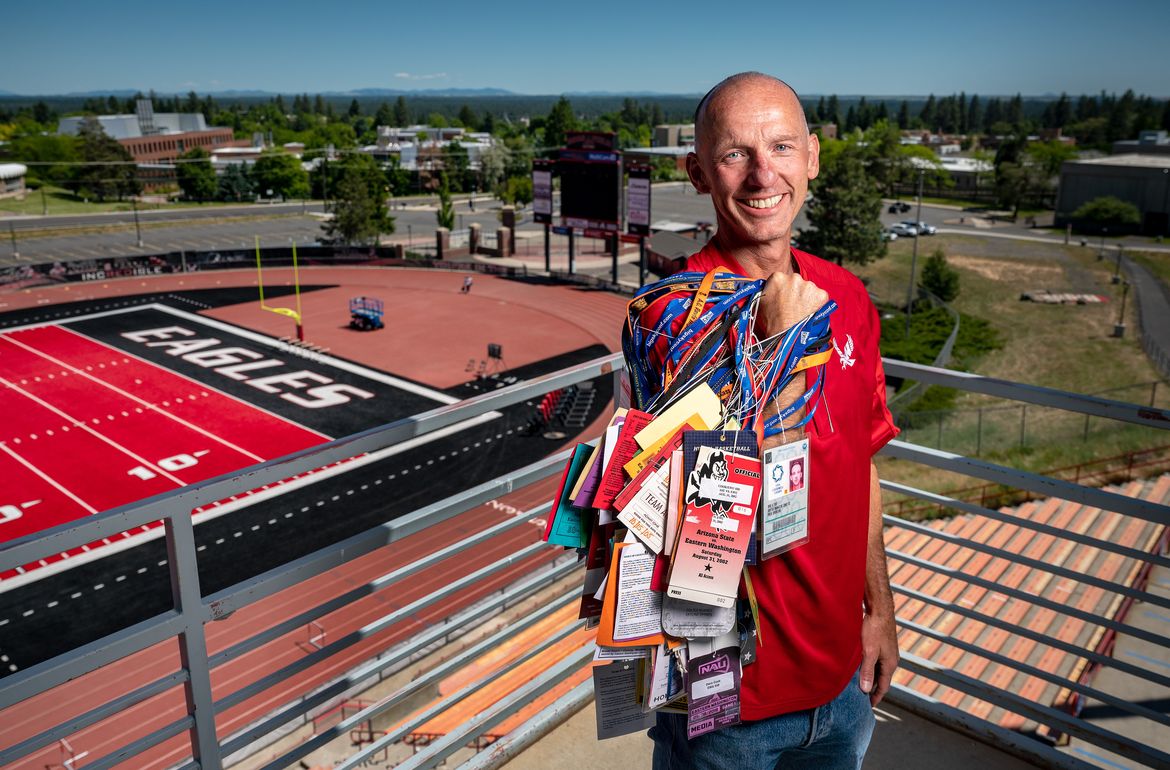 EWU: We were going to write a long piece this morning praising retiring Eastern sports information director Dave Cook. But then I realized there is no way I could do Cookie justice. There just weren’t enough interactions over the years. So we will leave it to others who worked with him more. But I will say this, when I did have to contact Cook for something, even though he was constantly overworked – the staff at Eastern has never been as large as it needed to be – he always came through. And did it efficiently, professionally and (I think) happily. There is no better compliment I can give him. For more, don’t miss Dan Thompson’s story. 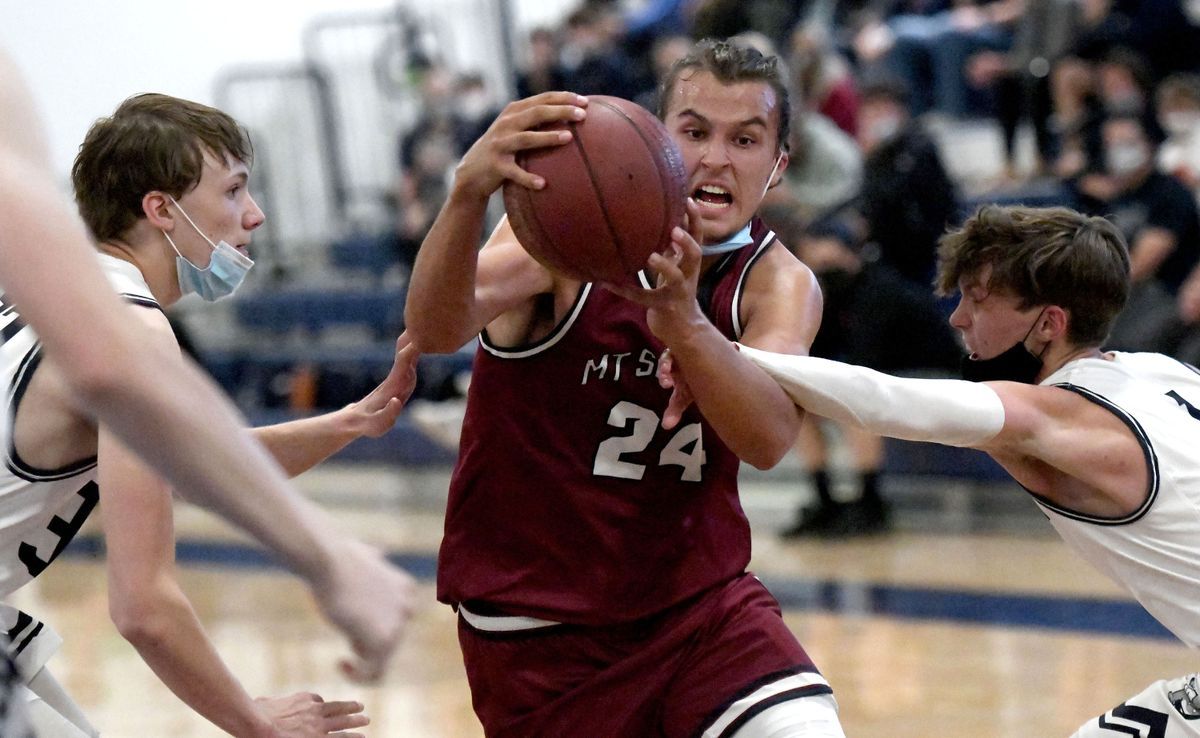 Preps: This is the time of year local high school athletes are playing with their club teams. That includes baseball. Though the return of the Spokane/Coeur d’Alene American Legion Wood Bat Classic will have to wait an extra day due to the heat. Justin Reed explains in this piece. … Washington’s winter sports didn’t happen until spring. So the all-league teams weren’t announced until recently. Dave Nichols has the list. 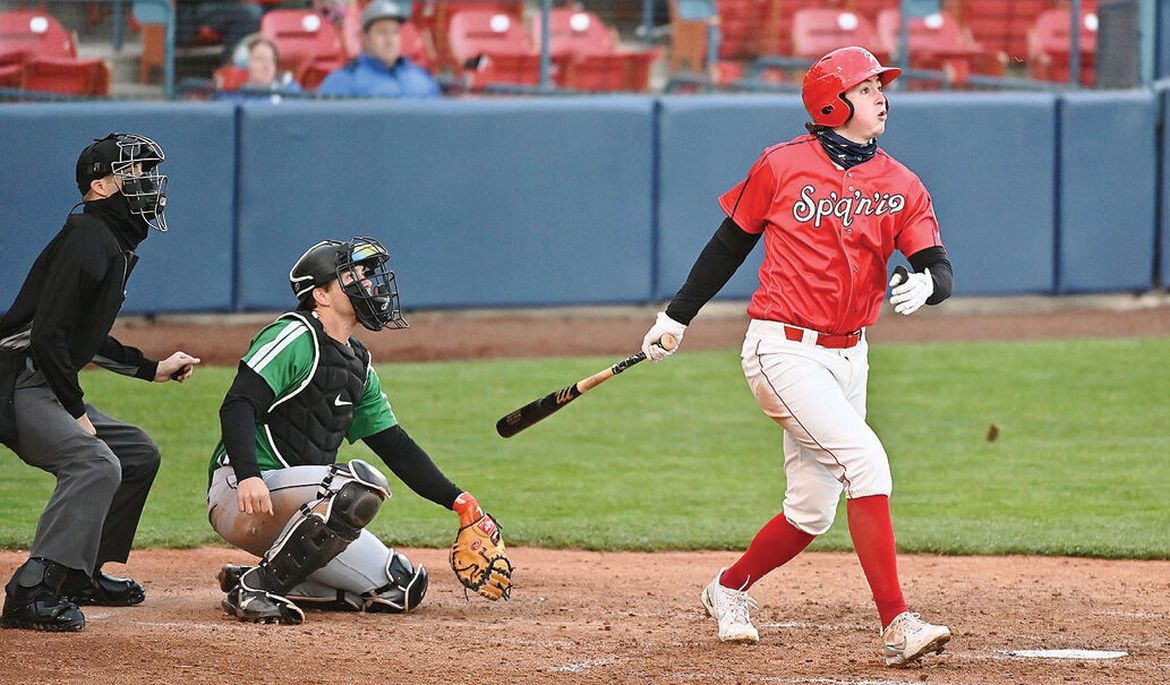 Indians: Dave also has the coverage of last night’s 4-3 loss to visiting Tri-City. Trent Fennell, usually a reliever, started for the Indians and did a great job. … Dave also has this notebook as Michael Toglia was selected to participate in the MLB Futures Game.

Chiefs: The CHL held its import draft yesterday, with Spokane selecting a defenseman and a center. … Tampa Bay has a 2-0 lead in the Stanley Cup finals after Wednesday night’s 3-1 victory.

Mariners: It took 10 innings, and a Dylan Moore three-run home run, but the M’s prevailed against the Blue Jays 9-7 in Buffalo, N.Y. … The offense did better in June. … Julio Rodriguez has been moved up the ladder. Who is next? … The M’s have three players headed to the Futures Game.

Seahawks: The Hawks have stars, sure. But these five players also have to do well for them to win. … There as a minor roster move yesterday.

Storm: Every one of Seattle’s trio of stars is an All-Star as well.

• When I was a college athlete, I used John Belushi’s nutrition guidance to reach my potential. Still do. Though the brand I buy is different. No more Hostess for me. I’ve discovered a different company, Bon Appetit. Its little chocolate doughnuts are perfect. Until later …