Jennifer and Frank Stabile were loving and involved parents to their 15-year-old son Michael, so much so that when he began struggling toward the end of middle school, he came to them.

The couple at first tried home-schooling him, which didn’t go well. He then began seeing a therapist and was prescribed medication for anxiety.

Things were looking up. Michael was looking forward to finishing his freshman year at Lake City High School so he could work more at his job at a local restaurant and spend time outdoors during his favorite season.

All those plans were cut short when Michael experimented with what he thought were prescription pills but turned out to be fentanyl in May.

“He looked like he was asleep, but I knew when I opened the door,” Frank Stabile said.

“My son lost his life for nothing,” his mother said through tears.

Michael’s death is just one of the latest in a string of fentanyl overdoses in the Inland Northwest.

“It’s alarming the increase in the amount of counterfeit pills coming into the Eastern Washington area,” said Mark Haigh, assistant special agent in charge for the Drug Enforcement Administration in the Inland Northwest. “In my nearly 30 years with DEA, I’ve never seen an illicit drug as potent and dangerous as fentanyl.”

In 2017 and 2018, only five fentanyl overdose deaths were reported in Spokane County, Department of Health data shows.

Through September 2020, 18 people died from overdosing on fentanyl in Spokane County.

During the COVID-19 pandemic, the drug was not only used more, but became more available in the region, according to the DEA.

Fentanyl is a synthetic opioid similar to morphine but 50 to 100 times more potent, said Dr. Michael Lemberger, a medication-assisted treatment provider in Spokane. Fentanyl has been used for decades in minor surgical procedures because it doesn’t last very long when administered by IV, he said. However, it’s not used very often, he said.

Recently, fentanyl pills called “Mexis” or “Mexi-blues” have been coming over the southern border of the United States, said Sgt. Jess Stennent, who is in charge of the North Idaho Narcotics Enforcement Task Force. The pills are being made in the middle of the jungle in Central and South America with one part fentanyl and three parts binder, like acetaminophen.

The problem is the drugs aren’t mixed properly, so one pill may have a dose that would get someone high and another from the same batch will have enough to kill them, Stennent said.

“There’s no quality control,” Stennent said. “One person may go home and be fine and get high and another might go home and die.”

Some users may not even know they’re taking fentanyl, Stennent said.

That’s what the Stabile family believes happened to their son.

After Jennifer’s first husband died, she met Frank, who became a loving stepfather to her two children, Kristin and Charlie. After four years of marriage, the pair were “blessed” with Michael, Frank Stabile said.

As a child, he loved being in the Boy Scouts, which helped him develop a passion for the outdoors. When he got older, the outdoor activities shifted from gaining merit badges to skateboarding, hiking and spending time at the beach, Frank Stabile said.

“In the sunshine in the summertime, it was his time to shine,” Frank Stabile said. “He was always outdoors.”

Toward the end of middle school, he got a job at Pokéworks, a restaurant in Coeur d’Alene near his school.

“Every boss always had the same thing to say … about being the greatest kid ever,” his dad said.

But Michael wasn’t without his troubles. Toward the end of middle school, he began struggling with anxiety.

“We would be out sometimes and he would be like, ‘Dad I need to get home,’ ” Frank Stabile said.

The teenager was open with his parents about his struggles, and he began seeing a therapist and started anxiety medication.

His parents knew he had tried smoking marijuana, and the family had open discussions about the potential dangers of using drugs at a young age, especially if they happened to be laced, Frank Stabile said.

“Nowadays it’s so rampant, that we were trying to get that under control,” Frank Stabile said of his son smoking marijuana.

Through all of this, Michael remained close with his friends, who spent lots of time at the Stabile family home, his parents said. Their house was the hangout , where the teens were so comfortable, sometimes they would show up even when Michael wasn’t there, Frank Stabile said. The group included his first girlfriend, Maddie Harris, who spent time with the Stabile family.

His nephew, Ryan Drapeau, was four years to the day younger than Michael. Despite the age difference, Michael and Ryan were close.

“He helped me be brave,” Ryan said.

The Stabiles thought Michael was learning to cope with his anxiety while continuing to be a good friend, family member and uncle. 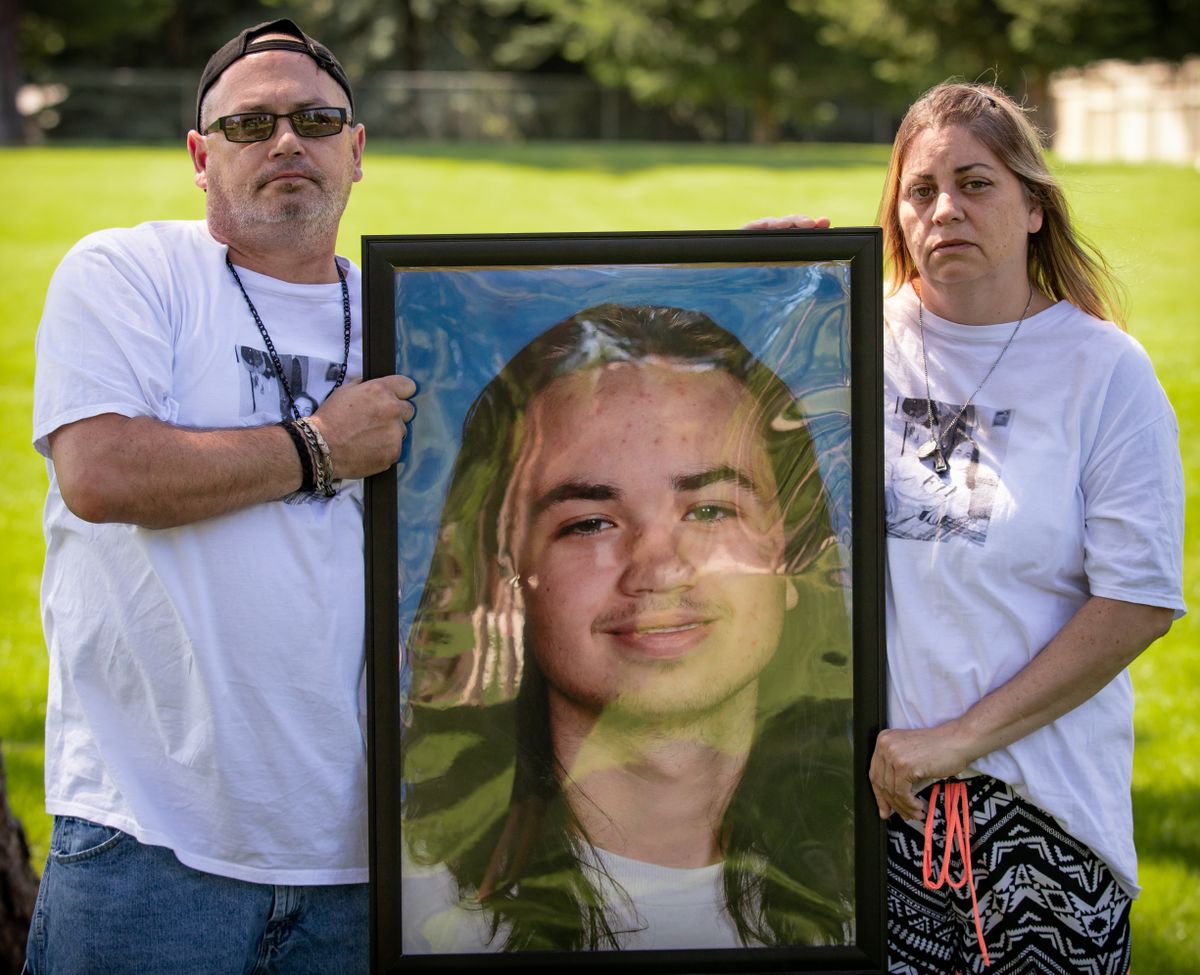 Father Frank Stabile (left) and mother Jennifer Stabile show the portrait of their late son, 15-year-old Michael Stabile, after a gathering in Coeur d’Alene on July 5, 2021 to remember their son, who died after a drug overdose in May at his parents’ home. Stabile was a freshman at Lake City High School who was close with his family, open about his struggles with anxiety and depression, but accidentally overdosed on narcotic pills that looked like oxycodone but were laced with Fentanyl. (Libby Kamrowski/The Spokesman-Review)

Then one weekend in May, everything went wrong.

Michael spent most of the weekend at home, hanging out in his room, listening to music and playing video games, his parents said. A friend dropped by Sunday night at some point, but that wasn’t out of the norm, Frank Stabile said.

His parents checked in on him about every 30 minutes, or he came out to say hello, a custom in their family.

Then Monday, Jennifer Stabile stayed home while her husband ran an errand. When he came home, Michael’s door was locked. Frank Stabile broke down the door to find his son had overdosed.

Despite his parents’ best efforts, Michael died after taking a fentanyl pill.

The family has been reeling from the death ever since, unable to even return to their family home and see the bedroom where they tried to save Michael’s life.

“I think Michael was experimenting,” his mother said.

Young people taking something they think is over-the-counter but turns out to be lethal is a significant worry when it comes to fentanyl, Haigh said.

“The public, especially our young adult and youth, may think they’re taking legitimate prescription pills; however, they’re probably counterfeit pills,” Haigh said. “It’s really about educating your loved ones, our youth and the young adults, about the danger of these counterfeit pills so we don’t lose anyone else to these dangerous drugs.”

Fentanyl doesn’t just affect young people experimenting with what they think are prescription pills; it affects those struggling with addiction.

With the COVID-19 pandemic making it difficult for those in recovery, many people relapsed, said Hallie Burchinal, co-founder of Compassionate Addiction Treatment (CAT), a zero-barrier treatment program in Spokane.

People who may have exclusively used methamphetamine or heroin in the past are now having fentanyl show up in their toxicology reports, she said.

“We already had an opioid epidemic, and fentanyl is so beyond that,” Burchinal said.

The problem with recovering from fentanyl abuse is that, unlike other opiates, prescription drugs used in medication assisted treatment programs, like Suboxone, make withdrawals worse, not better.

Fentanyl collects in the fat cells of someone’s body and interacts with the Suboxone, making their withdrawal from the drug worse, said Lemberger, who volunteers at CAT.

“When we give them the Suboxone, it puts them into withdrawal, unfortunately,” Lemberger said.

When people relapse, the drugs they previously used are now likely laced with fentanyl, Burchinal said. If someone falls into using fentanyl consistently, it’s extremely difficult to get them back into recovery.

“You’re super high risk of death and a deadly overdose,” Burchinal said. “Recovery is not going to look the same the next time because the withdrawals are so much worse.”

Despite difficulty getting patients back into recovery, Burchinal’s main worry is that people won’t even make it that far.

The danger of fentanyl isn’t just in taking it, but also in selling it. A 20-year-old man was shot and killed while attempting to steal Mexis from a drug dealer in Coeur d’Alene in May.

Fentanyl is relatively cheap and easy to make, Haigh said. The pills can be made for $1 to $2, but are sold for as high as $20 to $30 a pill in the Spokane area.

“It’s a profit deal. They don’t care,” said a sergeant with the Spokane Police Department’s Special Investigative Unit, who requested anonymity due to ongoing undercover work. “It’s all about the almighty dollar.”

Due to the danger of the drug, law enforcement has been collaborating to target dealers and manufacturers, Stennent said.

The DEA launched a public awareness campaign in North Idaho Monday, warning of the dangers of fentanyl and counterfeit pills.

The Stabile family hopes that, through better education on the dangers of fentanyl and sharing Michael’s story, they can help prevent other families from going through similar pain.

“Every day is a struggle, from one minute to the next,” Frank Stabile said. “It’s still as hard today as it was the first day.”

Editor’s Note: This story has been updated to note that the DEA’s public awareness campaign began Monday, July 5.