Return of the Chronicle

Starting July 12, The Chronicle will be available free for all Spokesman-Review subscribers.

It will not be printed and will only be available through the newspaper’s e-Edition.

The Chronicle will be delivered digitally by 6 p.m., Monday through Friday.

If you currently do not have your digital account activated with The Spokesman-Review, please contact our customer service department for assistance.

To subscribe at the lowest introductory rate, to ensure you receive the digital Chronicle e-Edition each weekday afternoon, please click here.

In the days when Spokane’s two newspapers shared a teletype machine in the county courthouse, Doug Floyd would infrequently play a prank on his competitor.

“It was a good-natured rivalry,” said Floyd, who later took editorial positions with both newspapers and who would phone ahead to alert his boss something coming across the teletype was a forgery.

Of course, the Chronicle reporters – on tighter deadlines for an evening paper – considered their product the superior of the two.

“Each newsroom was just off-limits,” said Bill Morlin, who started as a “copy boy” for The Spokesman-Review before being hired as a reporter for the Chronicle in 1972. “It was an unwritten code.”

Chronicle reporters arrived at 7 a.m. to meet a deadline that was constantly moving forward, Morlin remembered. It made their copy, and their reporting, fast and accurate.

That included breaking news, like when there was a fire at the Sunshine Mine in the Silver Valley in May 1972. Morlin said he was ordered to drive out to North Idaho by editor Howard Cleavinger, after the paper’s mining editor had gone home for the day in the early afternoon.

“We had a staff of people who were basically sleeping in the administrative offices,” said Morlin, who shared a byline on the front-page story of the disaster with Floyd, Dean Lokken and Wafford Conrad. “I don’t remember, but I think we took portable typewriters.”

Royce Gorseth, a columnist for The Spokesman-Review whose work also appeared in the Chronicle after the merger in 1983, said he remembered reading the paper’s competitor cover-to-cover, if for no other reason to stay on top of what they were doing.

“Both sides were always interested in what the other was doing,” he said. “But there’s no question there was respect.”

Even if that respect came grudgingly. Dave Broom recalled his father, Ron, also reading The Spokesman-Review every day. Ron Broom wrote the popular humor column “Putting it Lightly” among other editorial duties for the Chronicle. 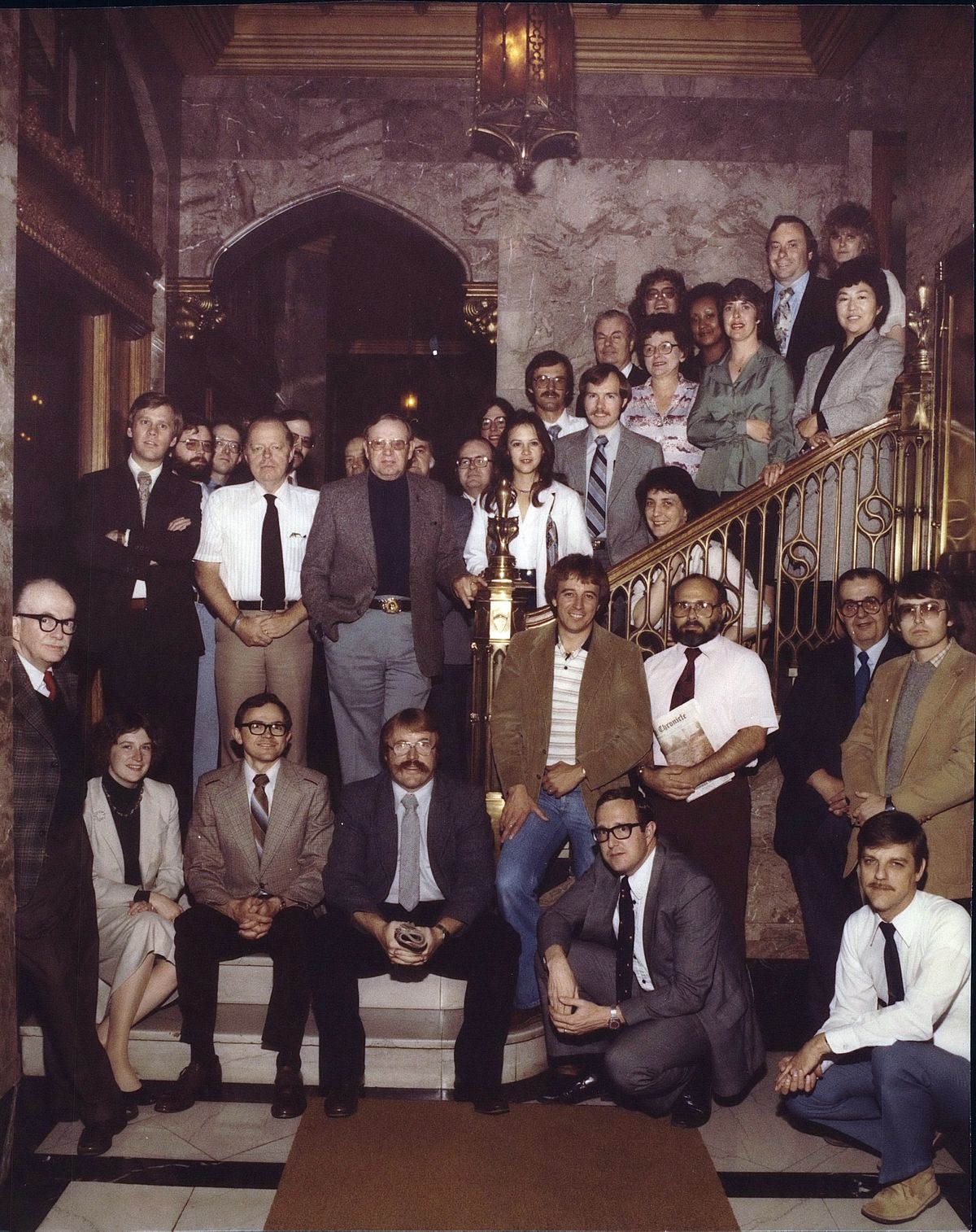 The Chronicle newspaper staff in 1987. (THE SPOKESMAN-REVIEW PHOTO ARCHIVE)

“We obviously subscribed to the Review, as well, although he had to hold his nose to do it,” Dave Broom said.

While it may have been hard for the public to believe that two newspapers with the same owner could view themselves as rivals, the competition improved the quality of both publications, reporters said.

“I think it was really advantageous for us to have a competitor that was on equal footing,” said Rob Allen, a Spokesman-Review reporter covering police at the same time as longtime Chronicle beat writer Jim Spoerhase.

The competition spurred him to seek different angles to reporting, he said, including scrutinizing why the police force didn’t seem to make a priority of investigating homicides in the West Central area of low-income residents. The ensuing work earned a visit to the newsroom by police, wondering why Allen was looking through their missing persons file, he said.

Karen Dorn Steele joined the Chronicle in 1982, after working at KSPS-TV. She was hired along with several other reporters who harbored a post-Watergate view of journalism, when reporters were spurred by the idea of challenging traditional institutions of authority.

“I know one person complained, it was either a Kaiser (Aluminum) or Washington Water Power (now Avista) person, and they said there’s this new era of what they called ‘attack journalism’ in town,” Dorn Steele said.

She remember her editor, Curt Pierson, gifting her a T-shirt on her 40th birthday that said, “Beware attack journalists.”

Mike Prager, who joined the Chronicle around the same time as Dorn Steele, said the paper was committed to getting out of the newsroom and gathering the news accurately and quickly.

They also were fiercely independent, Floyd remembers. He recalled a women’s organization in town trying deliver a cake to the office after a particularly positive story the Chronicle had published about them. Cleavinger, then the editor, refused the dessert for fear of appearing biased.

“He wanted to make sure we got the best story when we were going against the S-R,” Floyd said “He was adamant about not letting anybody influence our work, especially advertisers.”