It had been 6½ years since Blake Sims felt the pressure of a defensive line or blitzing linebacker.

The former dual-threat Alabama quarterback’s wheels have lost some tread since taking direction from Nick Saban in the January 2015 College Football Playoffs, but Sims can still move the football down the field with his arm and feet. 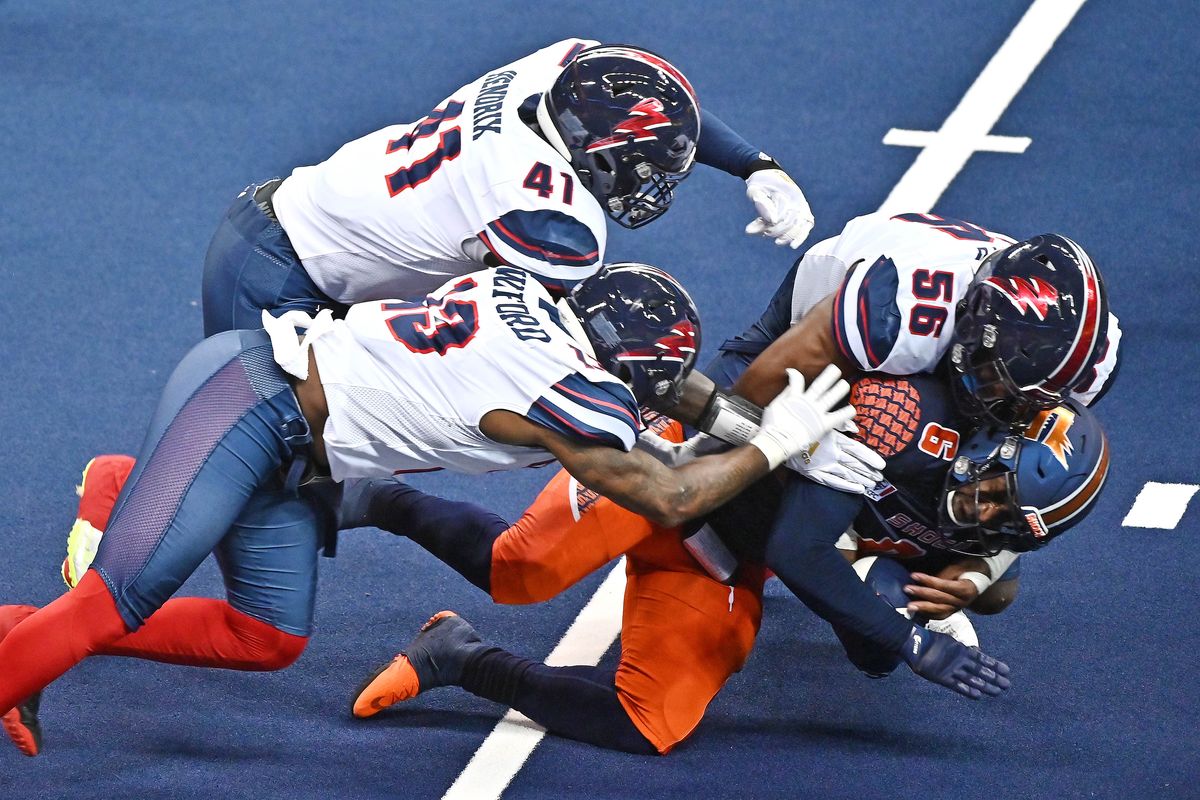 Spokane Shock quarterback Blake Sims (6) is gang tackle for a lose by Sioux Falls Storm during a IFL game Saturday, July 10, 2021 at Spokane Arena in Spokane WA.  (James Snook For The Spokesman-Review)

Sims recorded his first in-game snaps since college on Saturday as a member of the Indoor Football League’s reborn Spokane Shock, totaling 163 total yards and four touchdowns in a 46-35 win over the Sioux Falls Storm at the Spokane Arena.

The second-ranked Shock (5-2) dispatched the defending IFL champion Storm (4-4) for the second time in six weeks and without the services of veteran quarterback Charles McCullum, who sat out due to an ankle injury.

Sims, now a 30-year-old rookie, delivered in his indoor football debut and sealed a win in the IFL Game of the Week with a 35-yard touchdown run in the closing minute.

After brief and injury-hampered stints in the NFL, Canadian Football League and now-defunct Alliance American Football and Australia’s National Gridiron League, Sims smiled and danced like the 22-year-old version of himself that passed for more nearly 3,500 yards a senior.

“I haven’t played in so long, but I have a great family, and they’ve been behind me for so long,” Sims said.

Instead of throwing to current NFL figures like Amari Cooper like he did in Tuscaloosa, Sims had proven IFL talent around him.

Sims started off with consecutive completions before establishing a rhythm and helped the Shock score on three of their first four possessions, including a Kamrin Solomon touchdown run on the first drive.

His 30-yard touchdown pass to newly acquired Keyvan Rudd – formerly of the Northern Arizona Wranglers who ranked No. 2 in the IFL in receiving yards – gave the Shock a 21-20 lead late the second quarter.

Davante Sapp-Lynch scored on the first drive in the third quarter and gave the Shock a two-possession lead and they never trailed again.

Sioux Falls, which lost 50-32 to the Shock last month in South Dakota, made it a 37-35 game in the fourth quarter after Lorenzo Brown’s touchdown run, but Shock defensive back Mike Green stuffed the ensuing 2-point conversion try.

In a pivotal fourth-and-1 on the next drive, Sims converted on a quarterback run to move the chains before his back-breaking touchdown scamper.

“I got tears in my eyes that I’m holding back right now, I’m just happy,” Sims said. “(Our offensive line) blocked their butt off,” Sims said.