The shiny hardwood floors of the HUB Sports Center in Liberty Lake on Monday welcomed community chatter, squeaking shoes and renowned athletes to demonstrate that sports is more than a game. It’s also a tool to save lives and preserve opportunity.

Rise Above, a nonprofit that aims to empower Native youth through sports, organized the sports clinic and brought in living basketball legends such as Lenny Wilkens, Dale Ellis and Ruthie Bolton to help the kids improve their game. Musicians such as Eric Howk and Zachary Carothers of Portugal. The Man stopped by, and actor Danny Glover was on hand to remind kids to pursue their dreams.

Appearances from the professionals, Wilkens said, were powerful, since sports builds a level of community and can help players escape unfortunate circumstances. For Wilkens, 83, sports helped him go beyond the adversity he experienced as a child after his father passed away when he was five. His Hall of Fame resume includes an NBA title as head coach of the Seattle SuperSonics in 1979 and as an nine-time NBA all-star.

“Basketball has given me the opportunities to travel the world and scholarships to college,” Wilkens said. “(As a former player) I want to be part of the community and help it grow. People helped me when I was a youngster and let me know I could achieve and make the difference. If I can help them believe that, then I feel good about that change.”

About 120 children attended the event. Some kids sported tie-dyed shirts, but most wore all-black attire paired with colorful tennis shoes of their choice. Youth from seven tribes attended, including the Kalispel, Yakama, Nez Perce and Nisqually nations.

“I wanted to bring inspiration and hope, I couldn’t ask for anything better,” Jaci McCormack, co-founder of the Rise Above organization and member of the Nez Perce tribe said. “It’s been amazing.”

She wore Paul George’s “PG4” basketball shoes in the orange and teal colorway. Pixelated burnt sienna army patches were designed on the sides.

“You gotta be organized, gotta be together,” Watts told children while in a passing drill. “And that’s beyond basketball. That’s life.”

Bolton advised the children to rise above any issues in life, whether it’s turning the ball over or saying no to drugs. She recalled going through domestic abuse during her WNBA career but still pressed on with the help of her father’s motivation.

“I could have quit but I kept fighting,” said Bolton, a U.S. Olympian and the current assistant coach of the Nigerian women’s basketball Olympic team . “I feel indebted, like I need to let these kids know that I’ve been there. No one has their set of fingerprints. They’re unique and designed the way they are for a reason. I want to give them all their permission to soar and rise above.”

Basketball Hall of Famer Spencer Haywood spent his childhood in Silver City, Mississippi. He grew up around populations of Natives in surrounding cities like Yazoo City, Tchula and Belzoni.

“Make sure you learn to educate yourself,” Haywood told the children. “Love the game, love what you do and take care of yourself. Do not get sidetracked.”

The day was not only about basketball. On Shawn Higgins Memorial Fund court, 20 Native girls formed a semicircle around volleyball star Liz Masakayan. She taught them “pump-up-and-bounce” techniques and to get their hands up higher and earlier to receive volleys. Masakayan won the Broderick Award, recognized as the nation’s best collegiate volleyball player in 1985, and was inducted into the CBVA Beach Volleyball Hall of Fame in 2009 . She was a starter for the U.S. indoor squad at the 1988 Olympics in Seoul, South Korea.

Actor and activist Danny Glover was also in attendance. He recalled his first stint of activism at San Francisco State University, a five- month strike that demanded ethnic studies be part of the university curriculum in 1968. His activism stretches over 50 years.

“(Events like Rise Above) stops to take a moment to say ‘This is our future, let’s celebrate them by providing a foundation for them to grow and prosper not only individually but collectively,’” he said. “I’m proud to be here with the elders of this community as we watch their youth begin their process and journey.”

Iona Yellowjohn, a youth coordinator with the Kalispel Tribe, rented two vans so 11 kids could take the hourlong ride together. She believes these events motivate children to stay active and build work ethic.

“It’s an eye opener for them to move their bodies and have something to do for some of them, but some are just having fun making their first shots ever,” Yellowjohn said as she watched from the bench. “I think it’s fabulous watching these kids embrace it.” 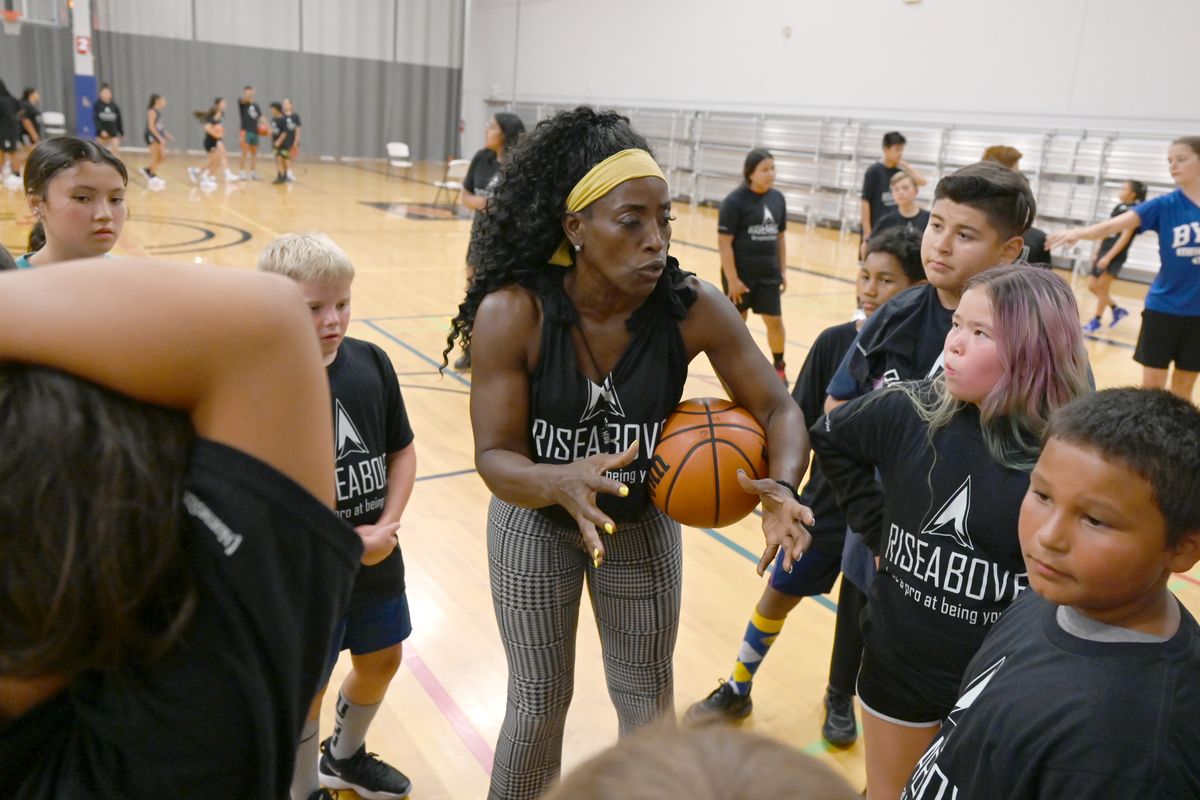 Two-time Olympian Ruthie Bolton coaches some of the participants in the Rise Above basketball camp at the Hub Sports Center Monday, July 12, 2021. The free camp was aimed at Native youth and paid for by donations. (Jesse Tinsley/The Spokesman-Review)

As the event came to a close, Glover and Wilkens encouraged the children to believe in not only themselves, but in the community making their dreams happen. McCormack presented both with beaded medallions at the end of their presentations. The children wished Slick Watts well. He was slated to make an appearance but was not able due to a major stroke in April that he’s still recovering from.

Wilkens and Haywood dove into a deep NBA Finals discussion, picking the Milwaukee Bucks to win it all but only if Milwaukee’s superstar forward Giannis Antetokounmpo continued to dominate the paint as he did in Game 3. The event was clothed in community, exactly what McCormack envisioned for Rise Above’s the first public event of 2021.

“What’s awesome about the people in the gym today is all our partners are like-minded and carry the same vision,” McCormack said. “I really can’t put into words what it means to Indian Country and what this is all going to do for the kids.”

The children huddled around Watts one last time, repeating the call-and-response chant that permeated the event and that Rise Above hopes to instills in their lives.