On a blisteringly hot Tuesday, a boat and a wakeboarder whizzed along the Spokane River, whooping in delight.

It was a perfect day to be out on the water, but Dave Mielke wasn’t happy to see them.

“That’s against the law,” Mielke said, pointing at the boat. “You have to go slow in the middle until you’re past Boulder Beach. No one’s enforcing the law.”

Mielke lives along the river between the Argonne Road bridge and Boulder Beach. He says boaters are creating wakes where they shouldn’t be. It’s dangerous when there are paddleboarders or swimmers out there, he says, and boat-caused waves are eroding the banks of this calm section of the Spokane River.

It might seem surprising that boats could cause serious erosion. The waves they make seem small, after all.

But the waves created by boats can cause erosion as far as 15 feet up a riverbank. Over time, thousands of small waves have exposed tree roots on Mielke’s property – to such an extent that some of his ponderosas have tumbled over into the water.

The boats are undeniably causing erosion along this calm, reservoir-like section of river – the Upriver Dam isn’t far west of here. Whether boaters are breaking the law is less clear. 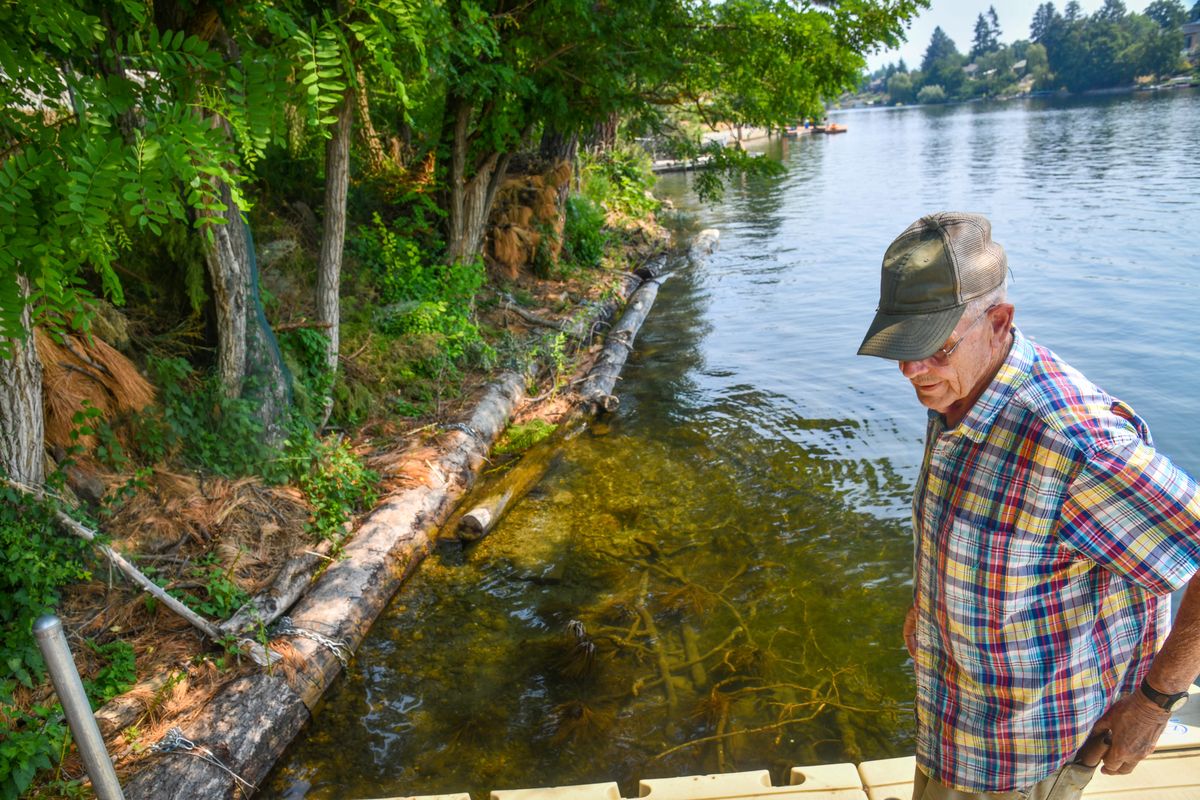 Dave Mielke lives along the Spokane River between the Argonne bridge and Boulder Beach. Here he views his shoreline property, Tuesday afternoon, July 13, 2021. Mielke says boats are going by too fast, creating wakes and causing erosion. He has installed logs along the bank to try and prevent further damage. (Dan Pelle/THE SPOKESMAN-REVIEW)

Spokane County has rules that prevent people from creating wakes in certain circumstances.

Washington has a broad law that applies to negligent boating, which local law enforcement can cite when writing infractions. The state law says that boaters must take into account the “effects of vessel wake,” and that no boater may “unreasonably endanger life, limb, property or other rights of any person entitled to the use of … waters.”

West of Boulder Beach, the river widens and wakes aren’t as much of an issue, Mielke said. But the thinnest stretches of the Spokane River between the Argonne Road bridge and Boulder Beach are about 250 feet wide, according to SCOUT, the Spokane County aerial imagery website.

“This is one of those educational issues where we really need to have folks that are moving wakeboats or motorboats around to observe the laws,” Spokane Riverkeeper Executive Director Jerry White Jr. said. “Those laws and rules are there for a reason.”

Mielke is one of about 110 homeowners along the narrow Argonne bridge to Boulder Beach stretch of the river, but erosion caused by boats is a major problem on many county waterways.

Spokane County Commissioner Josh Kerns said the county is focusing most of its erosion efforts on Newman Lake at the moment. A report on Newman Lake erosion should be complete soon, Kerns said, and the findings could guide the county’s wake guideline decisions in the future.

Walt Edelen, the water resources program manager at the Spokane Conservation District, said erosion caused by boats along the Spokane River has been a concern for years. Newman Lake is at the forefront of everyone’s mind right now, but there are other places where erosion needs to be addressed, Edelen said.

Boaters need to be responsible and not create wakes that damage riverbanks and lakeshores, Edelen said.

“If somebody were to come on your property with a bulldozer, they’d get in trouble,” he said. “But boats basically have immunity, because you can’t pin it on one particular boat.”

There are ways to combat erosion from wakes. Mielke said he has spent $36,500 to fight erosion on his property. He said he knows some of his neighbors have installed anti-erosion infrastructure too.

Homeowners can chain logs in place along the water’s edge, for instance. Mielke has done that, with the help of the Spokane Conservation District. Those logs break up the waves, preventing them from washing up onto the banks.

“It helps, but it’s not enough,” Mielke said.

Homeowners can also plant grasses and trees on their section of riverbank. Roots from those plants help hold soil in place. Mielke has done that too, plus he’s put protective rip rap on the bank.

The most effective erosion prevention can sometimes be concrete retaining walls or other types of sturdy armor.

“The areas that aren’t protected by concrete get pounded by wave action, and most of that is likely boat generated,” Edelen said.

Some of those defenses have been banned by the Washington Department of Fish and Wildlife because they reduce fish habitat, Mielke said.

Edelen said erosion has gotten worse in the last 30 years as the number of boaters and boating habits has changed.

“Wakeboard boats weren’t really invented until around the ’90s,” Edelen said. “Even though it’s great fun, a lot of our lakes or rivers don’t have the kind of capacity to have those boats out there.”

Jay Molitor is the president of the Spokane Upriver Owners Association, which Mielke is a part of. Molitor said he doesn’t think any of his organization’s longtime members are boating irresponsibly and creating wakes where they shouldn’t be.

Still, there are boaters creating big wakes in the wrong areas, Molitor said.

“If your wake is creating rocking of boats or docks, then your wake is too high,” he said. “We don’t want to shut this river down, we just want people to observe the law.”

At Mielke’s property on Tuesday, waves created by passing boats broke on shore and shook his dock repeatedly.

He said he simply wants the county to help fix the problem.