Daniel Martinez had a lot of jobs in his life, but he was most passionate about his role as a barber at Exclusive Barbershop on Argonne Road, those who knew him say.

Luis Zuniga, a barber at Exclusive and close friend of Martinez and his family, remembered Martinez as his mentor and a fun-loving person .

“He loved cutting hair … A lot of places he didn’t want to show up to, but he really did want to show up here,” Zuniga said. “He explained why we did things, like the ethics behind it, and, honestly, he showed you the passion he had for this, too. So passing on that passion was nice.”

Zuniga met Martinez about four years ago. Knowing Martinez did not have many family members in the area, Zuniga invited Martinez to his family gatherings.

“Him coming around and seeing my family, I think, made him feel at home,” Zuniga said. “He’s Mexican, I’m Mexican, and there’s not a lot out here, so when he comes over and experiences the food and the vibe, I think he loved that feeling. And my parents, my whole family, they loved having him over.” 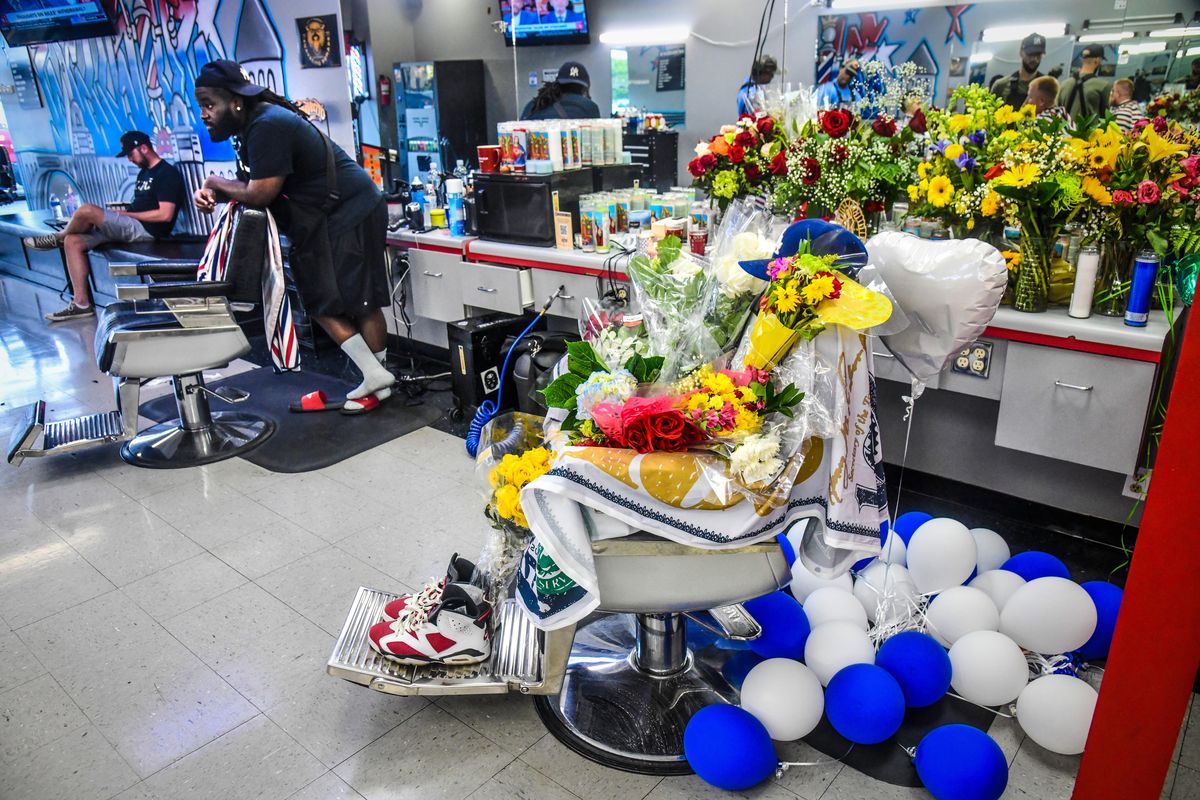 A memorial has sprung up at Exclusive Barbershop, Tuesday, July 27, 2021, for Daniel Martinez, who died after his friend allegedly shot him at Ichabod’s East last weekend. Daniel’s barber station is now covered in flowers, balloons and memorial candles. At left is Trae “The Barber” Taylor who worked next to Martinez for several years. (Dan Pelle/THE SPOKESMAN-REVIEW)

Maria Aguirre, Martinez’s fiancée, said the last message she received from him said, “I want you forever.” That was at 11:33 p.m. Friday, about a half-hour before the shooting. When a call to Martinez went unanswered, she started to feel anxious. She learned about the shooting at Ichabod’s on social media.

“I left work once someone came in to replace me and went to the scene. I still didn’t believe it. Couldn’t believe it,” Aguirre said. “Luis’ wife was there with me; she helped me make the call to his parents. His daughter called me crying that morning, asking me to tell her it wasn’t true. Her cry will forever be in my mind.”

For Zuniga, he said it was hard learning Aguilar allegedly played a part in Martinez’s death, but not knowing had been much worse.

“The hardest part to understand is why would they take it to the extreme, you know,” Zuniga said. “It kind of gives you closure. But it’s just crazy because Daniel was always the guy to split up fights.”

He and his co-workers set up a memorial at Martinez’s work station in Exclusive, teeming with flowers and gifts from members of the community. They held a candlelight vigil for their friend the day after the shooting. Zuniga estimated more than a hundred people showed up.

Aguirre said she was touched, but not surprised, to see how many people went to the vigil for Martinez.

“Daniel had so many friends. He was loved by everyone,” she said. “We couldn’t go anywhere without him introducing me to someone. His smile would light up a room when he walked in, and his laugh – oh, his laugh was so contagious. … He always told me if anything ever happened to him, I’d be taken care of. That’s the kind of people he had at his side.”