WASHINGTON – After a journey that began on the shore of the Salish Sea in northwestern Washington months earlier, a totem pole carved by members of the Lummi Nation arrived Thursday on the National Mall, the culmination of a cross-country tour to call attention to sacred Indigenous sites.

Standing in front of the Capitol dome, where a day earlier a bipartisan group of senators announced a deal to invest $1.2 trillion in infrastructure, leaders representing dozens of tribes urged Congress and the Biden administration not to repeat past mistakes and to acknowledge the harms done by previous infrastructure projects, including oil and gas extraction and the dams on the Lower Snake River.

While some speakers expressed skepticism that the federal government would respond to their pleas and seek tribes’ consent before starting new projects on their ancestral lands, the event organized by several Indigenous organizations got a warm welcome from Interior Secretary Deb Haaland, the first Native American cabinet secretary in the nation’s history.

“The fact that we are all here is not insignificant,” Haaland told the crowd. “When our nation’s capital was established, its policies were intended to exclude us, to assimilate us. Laws and policies were written without considering Indigenous communities’ challenges or their strengths, and we are working hard to undo so many consequences of these actions.”

In one of her first moves at the agency’s helm, Haaland recommended that President Joe Biden reverse a Trump administration decision to shrink the boundaries of Bears Ears National Monument in Utah – the first national monument created at the request of tribes – by 85%, opening up that land to mining and drilling. The Interior Department includes the Bureau of Indian Affairs, Bureau of Land Management, National Park Service and other offices with significant impact on public lands and tribal citizens. 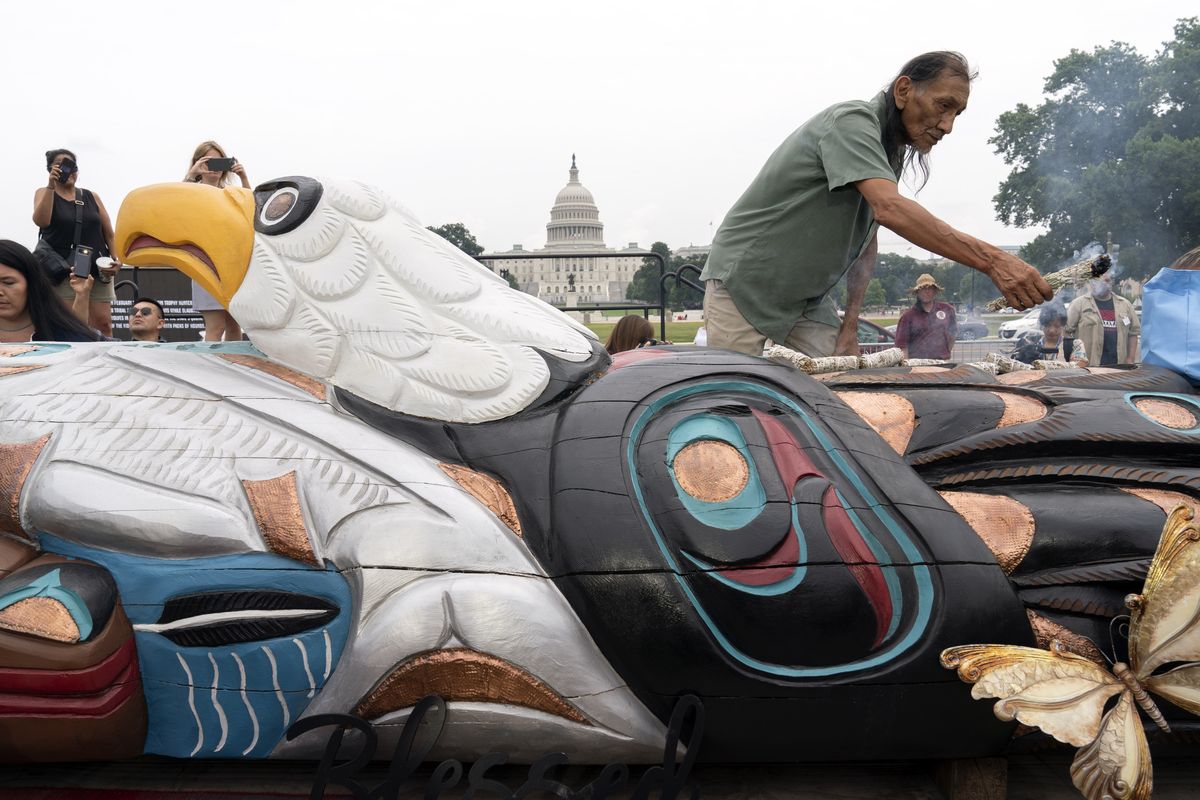 On its way to the nation’s capital, the pole made stops at Bears Ears, the Snake River in Idaho, the Black Hills of South Dakota and several other sites where local tribes hosted the Lummi carvers and prayed with them.

“This totem pole holds the prayers of all who blessed it along its journey to D.C.,” Jewell James, a Lummi master carver and leader of the House of Tears Carvers who created the pole, said in a statement. “Across Indian Country, our places where we pray, gather food and medicine, and hold our ceremonies, are being threatened by the greed and carelessness of corporations.”

James couldn’t make it to Washington, D.C., because of health issues, organizers said, but his brother Sit-ki-kadem was among several carvers who accompanied the totem pole across the country.

“Wherever we went on Turtle Island, we became family,” said Sit-ki-kadem, also known as Doug James, referring to the continent they drove across to reach the U.S. Capitol. “It’s really important to stand united, to come together with one heart and one mind.”

In addition to the leaders who took turns addressing the crowd about the mines, pipelines and other projects that affect their respective tribes, the event brought together a few hundred spectators and caught the attention of passing tourists. Rep. Kaiali’i Kahele, a freshman Democrat who represents Hawaii, also attended, along with Haaland and other representatives of the Biden administration.

“People’s ears are opening, their spirits are awakening,” Kahele said. “We need to stand in this unity that we’re seeing and hearing today. The sacred sites are real. They really do mean something to us, and they do need to be set aside, just like the salmon and the orca. We’ve got to reach out and protect those that can’t protect themselves from what humans have been doing to them.”

Julian Matthews, a member of the Nez Perce Tribe and board member of Nimiipuu Protecting the Environment, a nonprofit that advocates for breaching the Lower Snake River dams, came to the lectern holding a sign reading, “Free the Snake River.”

“All we want is to be able to take salmon from that river like my grandfather did, like my great-grandfather did, and I don’t want to be the one that loses it,” Matthews said. “I’m going to fight for this Snake River dam removal. We’re going to keep doing what we gotta do and push whoever we gotta push.”

Thursday’s event marked 20 years since the House of Tears Carvers began an annual tradition of crafting and delivering a totem pole as a gift, starting after the 9/11 terror attacks in 2001. Organizers said a permanent location for this year’s pole, a gift to the Biden administration, would be announced at a later date.