On May 23, 42 rangy cyclists dipped their back tires into the Pacific Ocean at La Push, Washington, posed for a photo and then madly pedaled east.

It was the Grand Depart for the Cross-Washington Mountain Bike Route, a 700-mile self-supported route that is part race, part adventure and part advocacy.

“I want it to be inclusive,” said Troy Hopwood, the creator of the route. “I want people who are going to take their time and enjoy it and (I want) those who want to go crazy fast.” 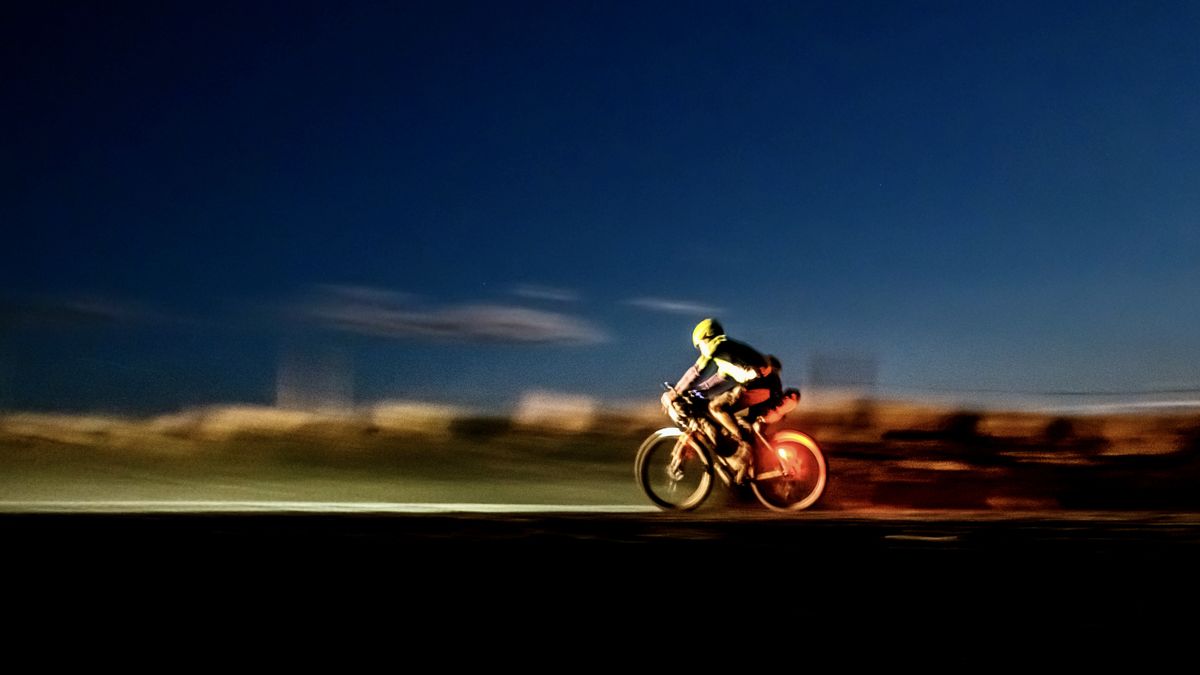 Pictured here is Ivan Moore, the fifth-place finisher and the top rider over 40 years old of the 2021 Cross Washington Mountain Bike Race. (Courtesy of Josh Kato)

The course tours Washington’s most scenic – and challenging – terrain, heading first through the Olympic Peninsula before dodging into Seattle’s traffic, climbing over the Cascades via Snoqualmie Pass and finally grinding across Washington’s drier, flatter midsection.

“Washington is really diverse. From the coast to the rain forest. To the Cascades. From the scablands,” Hopwood said. “It’s all so very, very different. Most people don’t realize it until they get out and ride.”

Spencer Tickman, the fastest of those 42 original riders, chewed through the race arriving in Tekoa 88 hours after dipping his back tire into the Pacific.

For those that approached the course as a race, it’s a grueling endeavor. One that requires forgoing sleep, normal meals and all other bodily comforts in the pursuit of a fast time. Plus no outside help is allowed.

“As much as it is a race, as much as there are racers, (it’s) seen as individual challenges,” said Ivan Moore, a Bellingham-based racer who finished fifth overall after four days of riding.

Moore’s goal was to place in the top 10 and break the five-day mark. He slept five hours total, riding through the night, at times hallucinating.

“I put a lot of work into it and there was a goal, and I achieved more than the goal. I’m so stoked with how I finished. It was definitely worth the pain and the effort,” he said.

“The first time I just wanted to survive,” he said. “This time, I was there for a good time.”

As fun as that competition is, Hopwood doesn’t want the course to appeal solely to the hardcore.

Hopwood started the race in 2017. An experienced endurance athlete and bike packer, at the time he was training for the Tour Divide, a 2,745-mile bike-packing race that follows the Continental Divide. As part of his training he looked for shorter bike-packing events. The closest ones were in California. He started bike-packing around Washington, designing his own 700-mile loops through the Cascades.

Those were “interesting” he said, but had no real story. Then he heard about the plight of the John Wayne Trail (now called the Palouse to Cascades State Park Trail).

The Palouse to Cascades State Park Trail is the state’s longest and thinnest state park. It’s 100 and 200 feet wide and runs nearly continuously from North Bend to the Idaho border near Tekoa.

But it’s a relatively obscure and underused trail despite its length and beauty.

The state purchased the trail corridor from the Chicago, Milwaukee, St. Paul and Pacific Railroad in 1981.

The Washington State Parks and Recreation Department, however, does not own all sections of the trail. The Department of Natural Resources owns some sections, as do private landowners. That checkerboard of ownership and management makes riding the trail a logistical challenge.

Hopwood figured organizing a course that followed much (but not all) of that trail would be a great way to raise its profile. It would also be fun for him and a way to train for longer, harder routes.

“If you see people on the trail using it, you can’t say it’s not being used,” he said. “Ultimately, I want to see the Palouse to Cascade Trail have the same cache as other (long trails).”

In 2016, after completing the Tour Divide, he started scouting the route spending days riding trails, often dead-ending and backtracking. After he’d figured a way across Washington, he organized the first Cross Washington in 2017.

To be clear, the route does not follow the Palouse to Cascades trail directly. That’s an important fact for new riders to know, he said.

“This is not an easy route. It’s a challenging route. It’s a beautiful route and it’s approachable,” he said. “But you have to approach it with the proper training. Proper health and proper mindset.”

Hopwood doesn’t call it a race and hesitates to even label it an event. All he provides, he said, is the route and a suggested start day.

That’s a conscious decision and intentional resistance to the “sportification” of outdoor recreation. This is about your experience on the bike and in nature, he said.

That ethos has come out of his own experience. Prior to becoming a bike-packer, Hopwood was a competitive racer, often winning races. But after training for, and completing, the Tour Divide, his mindset shifted.

He no longer competes in traditional races, instead preferring the camaraderie and personal challenge of bike packing.

That, more than anything else, is what he hopes becomes the lasting legacy of the Cross Washington.