Before last year, local contractor Jim Warner said he could take five garage plans to either the City of Spokane or Spokane County after lunch and walk out that same afternoon with five building permits.

Now, Warner, owner of Solid Structures, said he’s waiting as long as 12 weeks, which is causing myriad downstream issues that make it almost impossible to manage 11 crews and the expectations of customers as record-high lumber prices have nearly doubled the cost of those projects.

“Spokane County, we used to love any job we had there,” said Warner, who is based in Spokane. “Then they went to where they were the worst in the state. I would rather get a permit in Kittitas County. That’s unheard of.”

Warner’s crews build about 100 shops, a few homes and commercial buildings each year all over Washington, Idaho and into Montana. But because of the delays obtaining permits, he’s had to send his crews to jobs in places like Chelan and Omak.

“We are taking jobs we didn’t want to take but were being forced to take because we could not work here,” he said.

Building officials from Spokane County and the city of Spokane acknowledge the long wait times, and both said this week that they believe they have begun to solve the problem.

At the city, the issue came up this week as Council members Michael Cathcart and Karen Stratton said they have been fielding complaints about how long its taking city planners to issue permits.

“I’ve heard some frustration from folks that times are getting longer and longer,” Cathcart said. 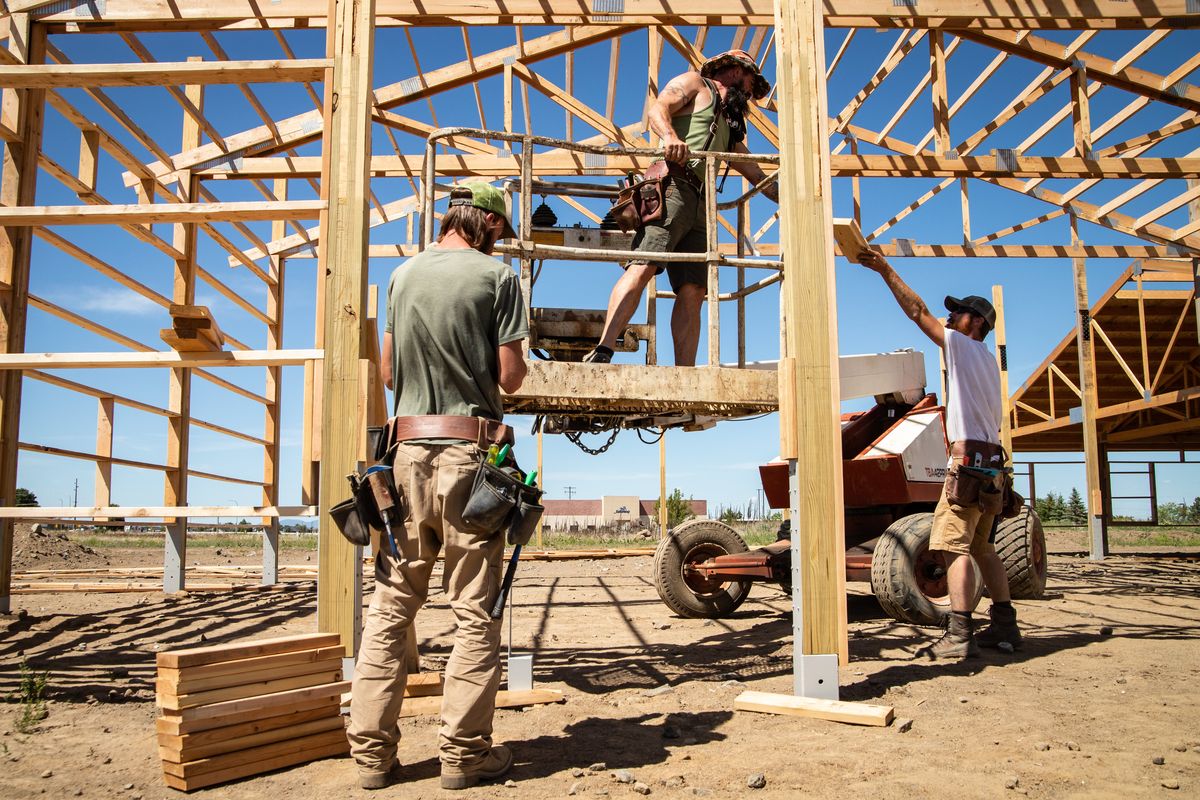 Construction workers build a structure at a job site off of Deer Heights Road near Airway Heights in June. The Washington state Department of Labor and Industries on Wednesday filed emergency heat and wildfire rules to protect outdoor workers this summer. (Libby Kamrowski/The Spokesman-Review)

Kris Becker, the interim director of Community and Economic Development, said the city has hired a third-party reviewer to help speed the process of permit applications.

“They are not getting longer,” Becker told Cathcart of the permit times. “They’ve been about four to six weeks for a while.”

Stratton asked Becker how long the permit process should take. Becker said it should take a contractor about 30 days to get a commercial permit and even less for a single-family home.

“We saw that huge increase in workload at the end of January,” Becker said. “And, we are finally getting to the end of that. You will see some improvement.”

Joel White, executive officer of the Spokane Home Builders Association, said the state’s new energy codes, which require builders to further limit air releases from homes and requires heating sources to include renewable energy and steer away from fossil fuels, were supposed to take effect on June 1, 2020.

With the pandemic raging, state officials pushed back the new codes to February 1, and dozens of contractors raced to get plans submitted for permits under the expiring rules to avoid the new codes, which can add between $20,000 to $30,000 to the price of new homes, White said.

“We say for every $1,000 increase of cost to a home in our economy, 200 families are priced out of the ability to purchase a new-construction home,” White said. “When you increase it by $20,000, you’ve priced 4,000 families out. That’s why they were trying to build these homes at a more sustainable level.”

Moore, the building official, said Spokane County received about 400 building permit requests in January 2020. But that number ballooned to about 800 this year in advance of the new code changes.

“We were sending people home because of the governor’s regulations about who could be in the office and who couldn’t,” Moore said. “The staffing wasn’t there to deal with this 100% increase.”

Contractors racing to beat the new energy codes got added to thousands of other residents who were sent home to work and decided it was time to pick up their hammers, he said.

“These plans came in and people were still submitting their decks, their garages and their remodels,” Moore said. “That’s what we’ve been doing, is digging out of this bottleneck.”

Warner saved some of his harshest criticism for city planners. He said many phone calls seeking information from city staff were forwarded to planners who didn’t have voicemail set up and it sometimes took days to get a response to an email for very simple questions.

“The city is the worst,” Warner said. “To get a hold of somebody at the city is very, very difficult.”

When the city did respond, it presented a new set of problems, as city employees used virtual meetings to review building requests.

“Their people were having trouble with their internet in their houses. They had dogs barking. It was extremely unprofessional,” Warner said. “If somebody did a presentation like that for one of my customers, I would fire that individual. That’s how bad it was.”

Warner said he runs between nine and 11 crews to complete all the jobs that customers seek. It became almost impossible to manage.

“I’m trying to schedule those crews to work when you don’t know whether you are going to get a permit,” he said. “Or, you are being told you will get a permit in eight weeks and it takes 12 and you are having to scramble.”

When customers come to contractors, they have expectations of work starting quickly, Warner said.

“When they get a price from contractor, who says we can do it for x-amount of dollars, then they have to wait 12 weeks,” he said.

With the price of lumber reaching record levels, some lumber suppliers would only guarantee a quoted price for a couple weeks. If the permit gets delayed, the project will either cost consumers more or will eliminate the profit margin for the contractor, he said.

As a result of the delays and escalating prices, some would-be customers are using alternative methods, Warner said.

That scenario leads to structures that may or may not meet building codes.

“There was a huge revenue loss for both the city and the county through this,” Warner said. “I know firsthand that a lot of people built a lot of stuff and it didn’t go through anybody’s book.”