Each week, The Spokesman-Review examines one question from the Naturalization Test immigrants must pass to become United States citizens.

Today’s question: Why did the United States enter the Persian Gulf War?

In August 1990, I was three years into my tour in the Marine Corps, sitting on a metal bench in my platoon’s berthing area aboard the amphibious assault ship USS Okinawa, lacing up my running shoes for our morning run around Naval Station Subic Bay and watching on CNN as tanks rolled into Kuwait City.

My first reaction was, I was hungover. I should’ve drunk more water, because going on a platoon run in the early morning tropical heat of the Philippines could be unforgiving.

My second reaction was that those tanks were Soviet (the Wall had just come down a year earlier; we were having a hard time adjusting to calling them Russian) T-72 tanks with Iraqi flags atop their turrets.

Hadn’t the United States reflagged Kuwaiti tankers just a few years earlier during the height of the Iran-Iraq War to avoid them becoming casualties?

Suddenly, the prospects of our upcoming port call to Perth, Australia, dimmed.

Sure enough, six weeks later, our amphibious ready group – Okinawa, along with USS Ogden, USS Fort McHenry, USS Cayuga and USS Durham – was cruising the Arabian Sea, with the Omani coastline off our port side; our command, the 13th Marine Expeditionary Unit, had been called up to participate in a massive buildup of troops, ships and aircraft to defend Saudi Arabia as part of Operation Desert Shield.

So, why did the United States get involved in what would become known as the Gulf War? The simple, straightforward answer for your test is that U.S. troops were sent to remove Saddam Hussein’s forces from Kuwait.

At the time, sitting in our berthing compartment aboard Okinawa, the enlisted Marines of Delta Company, 1st Battalion, 4th Marines, had a different answer as to why we were defending Saudi Arabia and preparing to liberate Kuwait. 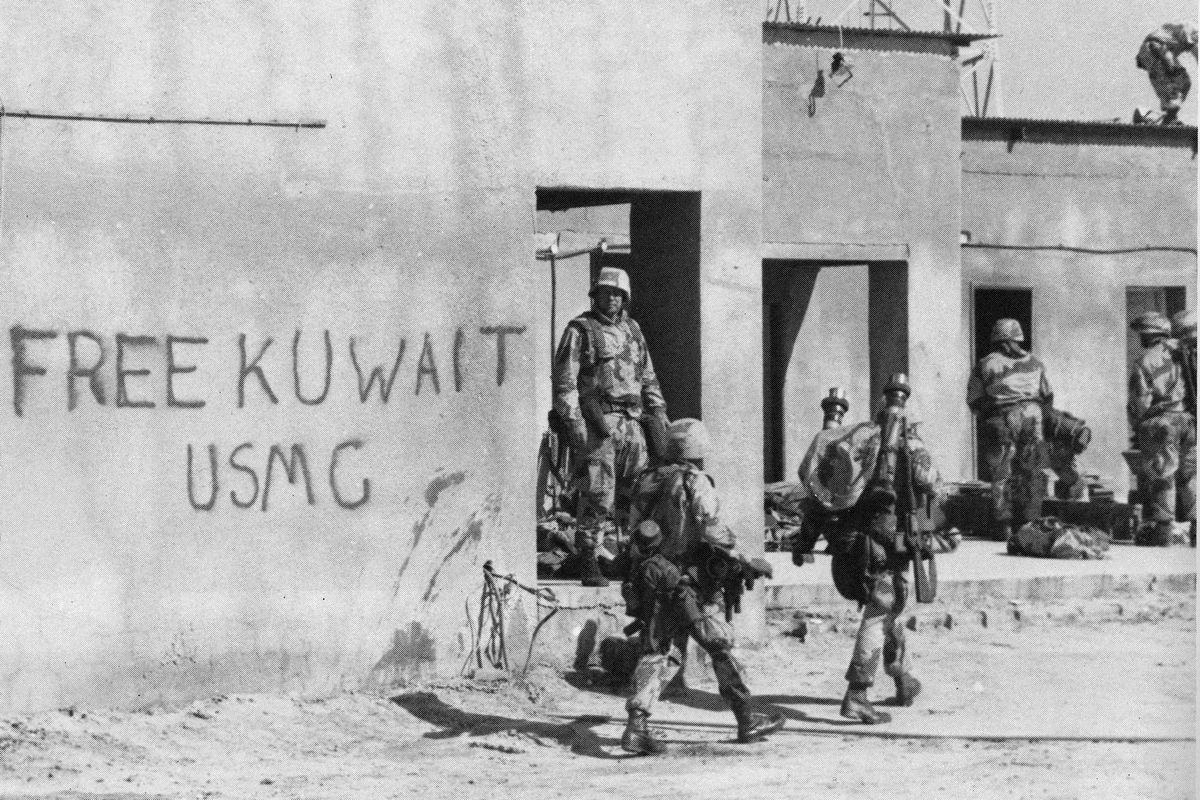 It didn’t matter if you were King Faisal of Saudi Arabia, President Saddam Hussein of Iraq or Presidents Gerald Ford, Jimmy Carter, Ronald Reagan or George H.W. Bush of the United States. The answer always came back to oil.

Though, to be fair, also playing a significant role were the partition of the Ottoman Empire following its collapse at the end of the First World War, the subsequent establishment of British protectorates in Palestine and Iraq, the creation of the Gulf states of Bahrain, Qatar and Kuwait and, finally, the creation of the Sultanate of Nejd ruled by the House of Saud in what is now known as Saudi Arabia.

Hussein, the strongman president who ruled with an iron fist – estimates of the number of Iraqis killed by his regime top 250,000 – was opposed to radical Shi’ite ideas spreading across Iraq following Ayatollah Khomeini’s rise to power in the Islamic Republic of Iran after the Shah of Iran, Mohammad Reza Pelavi, was deposed in 1979. Skirmishes between the two countries led to an invasion by Iraq in September 1980. One of Hussein’s goals was to seize the oil-rich region of Khuzestan.

Iran conscripted thousands of troops and threw them at the front line in human wave attacks. Iraq’s initial gains were lost, and by 1982 the country was fighting a defensive war it desperately wanted to end. Six years and a million lives would be consumed before a peace treaty was signed.

With the war mostly stalemated on the ground, both sides took the fight to the waters of the Persian Gulf in the Tanker War. Each side attacked the other’s shipping lanes. Take out the tankers, take out the cash supply to buy more arms to sustain the war effort.

On May 17, 1987, an American frigate, USS Stark, was patrolling off the coast of Saudi Arabia when an Iraqi jet locked on and fired two Exocet anti-ship missiles, which hit the frigate. Thirty-seven sailors died in the attack. Reagan was quick to accept the Iraqi apology for the attack and to shift blame, stating that, “the villain in the piece is Iran.”

As the Tanker War widened to include tankers from neutral Gulf nations, the United States reflagged Kuwaiti ones and provided them with U.S. Navy escorts as they transited the Gulf.

Eleven months after Stark was hit, a second Oliver Hazard Perry-class frigate, USS Samuel B. Roberts, struck a mine. The U.S. obtained evidence that confirmed the mine was Iranian in origin, and responded four days later with sea and air attacks on Iranian naval shipping and oil platforms that effectively crippled that country’s navy in one day.

The Iran-Iraq War shambled to an end in the summer of 1988, with Hussein having failed to wrest control of the oil fields away from Iran. His gaze turned south toward Kuwait.

Kuwait had actually once been part of Iraq, until it was carved out as a separate nation a few years after the First World War. It remained a British protectorate until its independence in 1961. What followed was a Golden Era, powered by the pumps out in the desert. Kuwait became one of the largest oil exporters in the Gulf. Its people embraced Western ideals, its economy flourished, so much so that Kuwait supported Iraq financially during its war with Iran.

After the war, when Iraq requested Kuwait forgive $65 billion in loans given to help finance the war effort, the request was rebuffed. Iraq then accused Kuwait in July 1990 of slant drilling into its Rumaila oil fields.

Meanwhile, as relations between Kuwait and Iraq were about to go south (literally), the Kingdom of Saudi Arabia was in a steadily improving relationship with the United States.

In 1973, Saudi Arabia declared an oil embargo against the United States for its support of Israel over its Arab neighbors during the Yom Kippur War, which in turn led to an energy crisis. Ask around and you’ll find people who will remember those odd and even rationing days at the gas pumps, with prices skyrocketing back in the mid-1970s.

Several months into the embargo, the United States signed a wide-ranging deal with the Kingdom to provide military and economic aid. The embargo was eventually lifted, and by the end of the 1970s, Saudi Arabia was importing F-15 fighters. The United States started building modern airbases and naval ports across the Kingdom, which came in handy on Aug. 2, 1990, when Hussein ordered his forces to seize Kuwait and its oil fields.

In Riyadh and Washington, there was a concern Hussein wouldn’t stop at the Kuwaiti-Saudi border, which could put him in control of a significant amount of the world’s oil supplies. President George H.W. Bush began deploying thousands of troops to defend Saudi Arabia, and the United Nations passed Security Council Resolution 660 on Aug. 2, condemning the invasion and ordering Iraq to leave immediately.

As the United States built an international coalition to defend Saudi Arabia, the United Nations passed a series of resolutions, leading up to Security Council Resolution 678 on Nov. 29, 1990, giving Iraq a deadline of Jan. 15 to leave Kuwait. Hussein remained defiant, telling the people of Iraq, “The battle in which you are locked today is the mother of all battles. Our rendezvous with victory is very near, God willing.”

Gen. Norman Schwarzkopf, the commander-in-chief of U.S. Central Command, offered a different assessment of his counterpart.

More than half a million U.S. soldiers, sailors, airmen and Marines deployed to the region as part of a broad coalition of forces that included troops, aircraft and ships from around the world.

Jan. 15 came, and Hussein’s forces still were entrenched in Kuwait.

The following morning began like every other day with the piping of Reveille at 0600, but then the captain of the Okinawa addressed the sailors and Marines aboard.

Iraq had not followed Security Council Resolution 678, calling for Hussein to withdraw his forces from Kuwait by Jan. 15, and as of midnight local time, the ship’s captain said, “the Tomahawks (cruise missiles) were flying.” The air campaign to liberate Kuwait had begun.

Less than six weeks later, what remained of the Iraqi army that hadn’t surrendered or been destroyed was routed back north across the border. In a footnote to the relatively quick campaign, Iraqi forces intentionally set fire to the Kuwaiti oil fields Hussein had sought to seize.

Initial estimates said it would take two years to cap the hundreds of well fires; the last fire was snuffed out nine months after the Gulf War ended.

Rob Kauder works in The Spokesman-Review’s newsroom as an online producer.