A custom luxury estate just steps away from Lake Coeur d’Alene is on the market for $27 million, making it the most expensive home listed in Idaho and an indicator of the “entirely different type of wealth” coming into the area.

“Homes like this are totally new to the North Idaho market because the introduction of the ultra-high-end golf communities have attracted an entirely different type of wealth to the area,” said listing agent and luxury Realtor Greg Rowley of Coldwell Banker Schneidmiller Realty.

After the Golf Club at Black Rock and Gozzer Ranch Lake & Golf Club opened in 2003 and 2007, respectively, they garnered a following of celebrities and wealthy visitors, some of whom desired waterfront property in Coeur d’Alene.

“Some of the most expensive homes on the lake have been built in the last few years. Now, timing-wise, they are selling. It’s not as if homes like this rarely come on the market – it’s homes like this haven’t existed before,” Rowley said of the estate. “This trophy home is an entirely new market segment.”

The most expensive home sold in Idaho was the 18-acre lakefront Sky Pine Estate in Worley. A company linked to David Whitmire Hearst Jr., who is the grandson of late publishing magnate William Randolph Hearst, purchased the property last year for $27.5 million, Mansion Global reported. 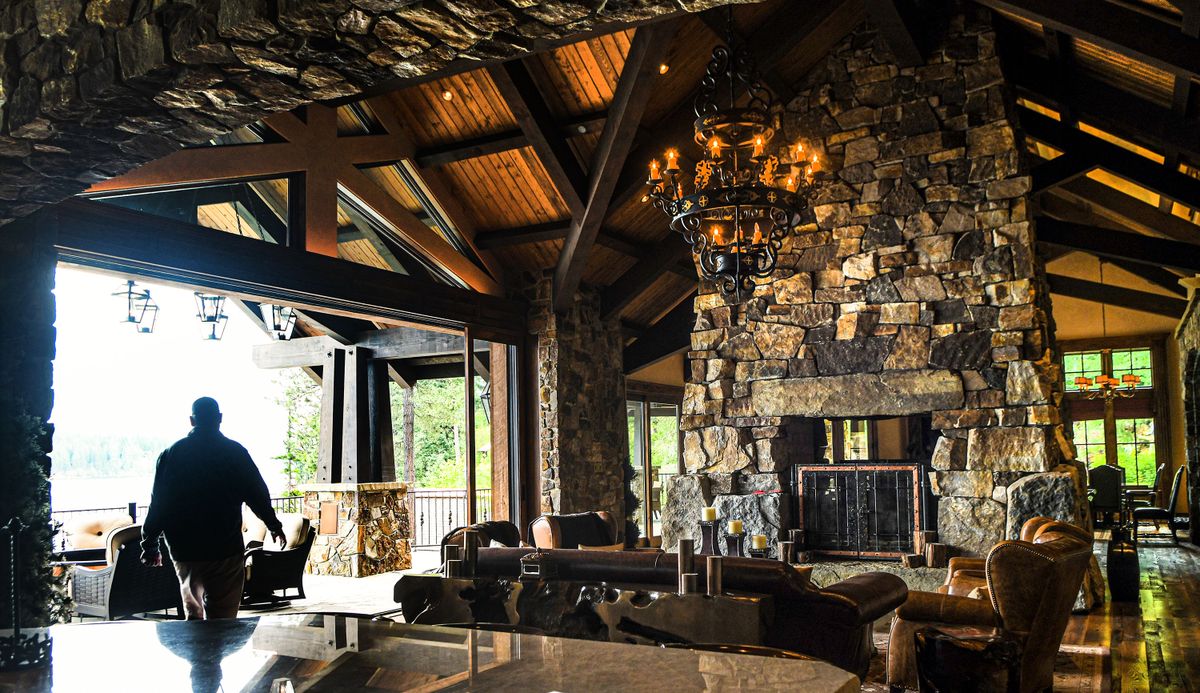 Hedlund is known in the architecture industry for designing custom homes in Southern California and North Idaho, as well as high-end golf clubhouses at the Bridges at Rancho Santa Fe, the Golf Club at Black Rock and Sonoma Golf Club, among others.

The 4-bedroom, 4.5 bathroom lodge-style estate blends indoor and outdoor living with retractable glass walls and spaces for entertaining. The property has several outdoor terraces, and nearly every room has a lake view.

Luxury finishes are featured throughout the estate, which has a chef’s kitchen with a La Cornue range from France and marble countertops, a wine cellar, gym, a bar and entertainment area, and a recreation space with multiple televisions, a soda pop bar, theater and game room.

The primary bedroom has a fireplace, large walk-in closet and an attached bathroom with a soaking tub and walk-in shower.

The estate has automated lighting, sound, temperature and television controls operated via touchscreen.

The property also boasts an outdoor kitchen with a pizza oven. There are fire pits scattered throughout the property’s exterior and a waterfall feature.

The 1,400-square foot caretakers’ home and 2,000-square-foot lakefront guesthouse make the property an ideal getaway for a large family with guests or support staff, Rowley said.

However, records show the home was previously owned by Ed Mylett, an entrepreneur, author, speaker and podcast host. Ownership was transferred in May 2020 to Reno-based Villa Rockledge LLLP, whose principal is Scandia Realty Group Inc., according to documents from the Kootenai County Recorder’s Office.

The estate had initially been listed on the market last year. The Coeur d’Alene Multiple Listing Service indicates it was relisted in April.

It’s rare for homes on the waterfront to have direct access to a sandy beach, and that’s what makes Copper Rock Estate unique, Rowley said.

A Stancraft boat is included in the property sale, Rowley added.

“(The estate) is close to the water, and add that to the fact that it’s near Mica Bay – many consider it to be the best part of the lake,” Rowley said.

Copper Rock Estate at Mica Bay has generated interest from a few families renting it this summer. It’s common for luxury buyers – especially those in California – to rent a property before buying to ensure it’s a good fit, Rowley said.