Eleanor Roosevelt’s Steinway baby grand piano returned home June 4 after a family donated it to the first lady’s historic collection. To restore her 1936 instrument, National Park Service curators tapped one expert to do that work in July – Spokane’s Ken Eschete.

Known in the U.S. for his piano technician and conservation work, Eschete has touched many pianos of the famous, including Prince Albert’s 1854 Erard concert grand at the Smithsonian he restored to being playable again.

Eschete once evaluated the condition of the 1860-circa Schomacker grand that Mary Lincoln ordered for the White House when a museum asked him to stabilize it for an exhibit. With a curator nearby, he tuned the Franklin D. Roosevelt grand at the Springwood historic estate.

In 2001, Eschete also did restoration on the ornately decorated Steinway grand at the Vanderbilt Mansion. He restored the Washington state Capitol’s Blüthner grand piano in 2018 that’s now used for concerts in the governor’s reception room. Others are the Smithsonian’s Chickering grand and a piano for a Will Rogers museum.

“I was really attracted to the conservation point of view,” said Eschete, 72, who early on received a fellowship to study museum techniques at the Smithsonian. In its musical instruments division, he learned use of organic chemistry methods with natural remedies to restore and preserve antiques without altering them.

To bring life back to pianos with aging parts, restoration approaches differ, he said.

“There’s restoration in which you’d take an old instrument and you’d completely strip the finish and replace all the parts and make it like new,” he said. “Then there is another approach, conservation, in which you respect the integrity of the instrument and try to change as little as possible. 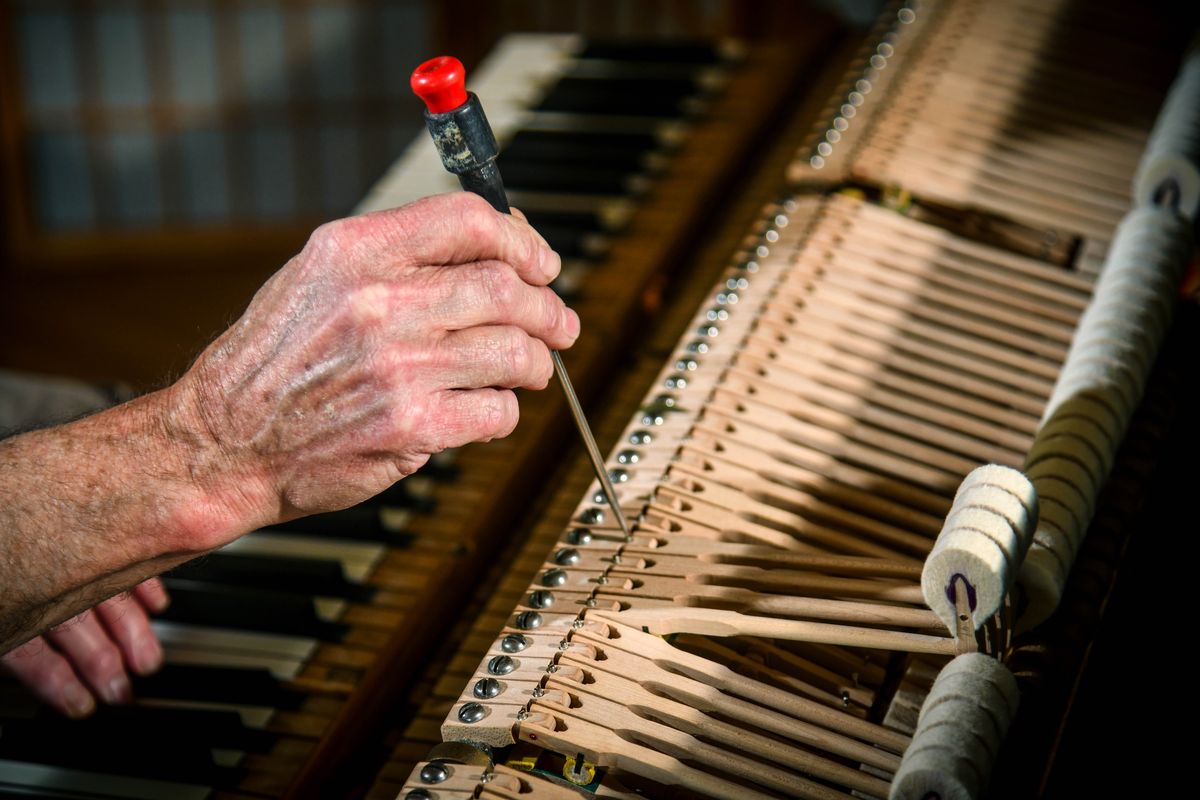 Spokane piano restorer Ken Eschete will soon restore Eleanor Roosevelt’s Steinway, one of many famous, historical pianos he’s brought back to life. Here he demonstrates the hammer drop adjustment on his 1923 Steinway in his north Spokane home on Wednesday. (Dan Pelle/The Spokesman-Review)

He’ll travel to Hyde Park, New York, to work on the Roosevelt Steinway. It has loose tuning pins, and it will need to be tuned so it’s playable. He’ll focus on creating a way for it to handle upcoming wear and tear.

Curators plan for the instrument to be played around the history of social events that were held by Eleanor and President Roosevelt based on detailed records of food served and music provided.

Before the piano is displayed at Eleanor Roosevelt’s Val-Kill cottage, the Steinway will go on exhibit next year in the Wallace Center at the FDR Presidential Library, in Hyde Park, to showcase the instrument along with stories, photos and history. But it will return to Val-Kill, where Eleanor often stayed during her husband’s presidency, lived after his death and entertained dignitaries.

“We have to do everything we can to preserve all of the original materials,” Eschete said. “The wear and tear from playing a piano is concentrated in the hammer that hits the strings. We’re going to remove the original parts because they can be removed with a screw.

“We’ll place them in order in acid-free boxes and put them in storage, so at some point, if we wanted to put all the original parts back together again, we could.”

For the inside, new parts were specially made that he’ll install as a substitute to absorb use for the exhibit shows. “I’m going with a whole array of tools. It’s something I should be able to do in about five days.”

During his career, Eschete has invented two treatments to bring antique piano parts back to life. In a three-room basement workshop of his north Spokane home, Eschete has everything from woodworking tools to felt ordered from Boston to do conservation work. In between, he’s tuning and fixing regional pianos.

A back door at street level is big enough for a grand piano to get rolled in upright. Upstairs, Eschete has his own antiques – a 1923 Steinway and a square piano made in the 1790s with the marking of London’s Broadwood and Son.

He and his wife Christine moved here eight years ago after an invite from a piano technician and friend in Spokane, Rose Fanger. They wanted to relocate after working in New Zealand.

Eschete is a native of New Orleans; his wife is from San Francisco. They met in Chicago, where Eschete worked as director of keyboard maintenance at Northwestern University for 13 years.

Eschete started his career on a different musical path with another instrument. During the Vietnam War, he was accepted as a trumpet player in the Military Academy Band based at West Point. Later, visiting a former bandmate in Boston, he stopped to see that friend’s class in the North Bennet Street School’s piano technology program.

“I had no interest in pianos,” Eschete said. “I was interested in mechanical stuff and could fix anything. I had a father who was an all-around mechanic, so I grew up with not a silver spoon in my mouth, but a 9/16th wrench in my mouth.”

That day at the school, Eschete saw people puzzling over a problem with a piano. “I told them what the solution was,” he said. He eventually applied, and leaders remembered his ability. Instructor Bill Garlick brought in his antique pianos so students could practice skills in the mid-1970s.

Eschete also met Fanger, a fellow student and previous secretary in the Smithsonian’s musical instruments division. She helped Eschete meet a few curators. Completing that fellowship while in graduate school, he’d gained technical knowledge at Bennet, then the conservation science hooked him.

“I loved figuring out what kind of wood this was by getting out a microscope and examining the cell structure,” he said. “I loved the organic chemistry, which I hated in college, but I liked it when they gave me some application.”

It might mean mixing two chemicals to turn a black stain on oak to translucent. “There are a lot of practical applications for organic chemistry, which is used a lot in museum conservation work,” he said.

In fact, he’s known for the transplanting of conservation science into piano voicing. The work often means fixes for felted-wool hammers that range in size from tiny to large. Each one hits internal strings of various lengths to make a different kind of tone, “depending on how soft the felt is or how hard the felt is,” he said.

“The problem we always have is sometimes the hammer is too soft; we’re not getting enough sound. One of the options I invented is borrowed from museum conservation work.”

He created a method for using beads of acrylic dissolved in 190-proof grain alcohol. The liquid then has little molecules of plastic floating inside. When applied to the felt, and the solvent evaporates, tiny bits of plastic molecules return to a solid form to give structure inside the felt.

Eschete experimented with the method for about 15 years while encouraged to keep it a trade secret, but word got out. Then two years ago, he published his method in a trade journal that’s since gone international.

His other breakthrough tackles problems with tuning pin planks. Holes were drilled too small for a pin, causing friction and issues in tuning. And often the wood block that holds the tuning pins develops big cracks, so the tuning pins will not stay.

“I invented a way to repair them in place using a specialized epoxy that mixes up like water,” he said. “This is a commercial product not designed for this purpose, and it is something again from museum conservation work.

“When it goes from a liquid to a solid, it’s inside and also creates structure. I found if I removed the tuning pins and then flood the holes with this very watery epoxy, then I can redrill the hole.”

Sometimes, he can put back the original tuning pins and reuse the original strings. “When you look at it, you can’t see any difference, but the big difference is when you try to tune it, it would hold a tune.”

Of all the famous pieces he’s tweaked, one stands out. “I think it would be the FDR piano,” Eschete said. The Vanderbilt piano was the most expensive instrument.

“But Cornelius Vanderbilt is not someone I admired,” he said. “When I got a chance to go into the parlor at the FDR mansion wearing white gloves with the curator moving all the photos on the piano – all the famous people who’d been to the FDR mansion – I was really moved to be able to look at that instrument and to tune it.”

He says FDR piano and now Eleanor’s grand are “national treasures.” “Because of the association with someone who is incredibly famous or important to a culture, like FDR was, then the value of that object changes. It transforms into something that’s considered to be cultural property or a cultural treasure even though there’s nothing fancy about it.

“Neither was there anything fancy about Lincoln’s piano. It’s that transcendence from being an ordinary, manufactured object that, because of its association with someone so treasured by society, and the history of that person, a decision is made to preserve that object exactly the way it is without altering, so it can be preserved not only for this lifetime, but lifetimes and lifetimes that follow.”