The Gonzaga women had to go the distance Monday.

Heavy favorites against a Santa Clara squad they’d dominated twice earlier, the Zags finally overcome a poor start and some erratic shooting to beat the Broncos 72-62 at the Orleans Arena in the semifinals of the West Coast Conference Tournament.

GU will face BYU on Tuesday in Las Vegas for a chance to win its first tournament title in three years.

“I think our team played a good game,” Gonzaga coach Lisa Fortier said. “Santa Clara had us out of sorts a little in the first half, and I really like the way we responded after that.”

The Zags’ response mechanism was tested all afternoon in a game that wasn’t safe until the final minute.

GU led by 13 on several occasions in the second half, only to have Santa Clara get within 6 – the last time with 3 minutes, 51 seconds to play.

However, GU freshman Yvonne Ejim converted a sweet pass from Kayleigh Truong into an easy layup, Jill Townsend drained a 3-pointer after a pass from Kaylynne Truong following a Santa Clara turnover, and Gonzaga led by double digits the rest of the way.

Gonzaga improved to 22-3 overall and kept alive its chances of snagging at least a No. 4 seed in the NCAA Tournament. Santa Clara ends the season at 14-11.

Neither team shot well, especially from long range; Santa Clara was 8-for-22 while GU was 5-for-18. The Zags also committed a season-high 21 turnovers.

GU also got a double-double – 14 points and 10 boards – from Townsend, a senior guard.

“We were moving the ball well,” Fortier said. “We’re at our best when we share the ball and when we’re playing as a team.”

That didn’t happen until well into the first half.

The Zags shot just 6-for-17 and committed 7 turnovers in the first quarter, yet led 12-6 because they held Santa Clara to 3-for-14 shooting and 0-for-6 from long range.

“They got us a little bit rushed, they were taking us out of some stuff and had us making passes that normally we’re not making, reads we’re not making,” said senior forward Jenn Wirth, who had 12 points and 5 boards.

The second quarter was dominated by runs. Santa Clara scored 7 straight points to get within one point, 17-16, and would have taken the lead but for a missed layin.

GU answered with a 12-0 run highlighted by its only 3-pointer of the half, by Abby O’Connor.

However, the Broncos closed the half with a 6-0 run and trailed 29-22 at intermission.

GU was 11-for-31 from the field in the first half and had 11 turnovers; the Zags came in averaging just 14 turnovers a game.

Santa Clara got within 3 points early in the third quarter, but Cierra Walker responded with the first of a trio of 3-pointers. The Broncos did so again twice more before GU gained some breathing room late in the quarter.

Gonzaga’s shooting woes disappeared in the third as it converted 10-of-14 attempts, but Santa Clara nearly matched the Zags, shooting at a 58.3 percent clip for 17 third-quarter points.

Santa Clara was led by Lindsey VanAllen with a game-high 17 points on 7-of-14 from the floor, while Merle Wiehl and Ashlyn Herlihy added 16 points each. 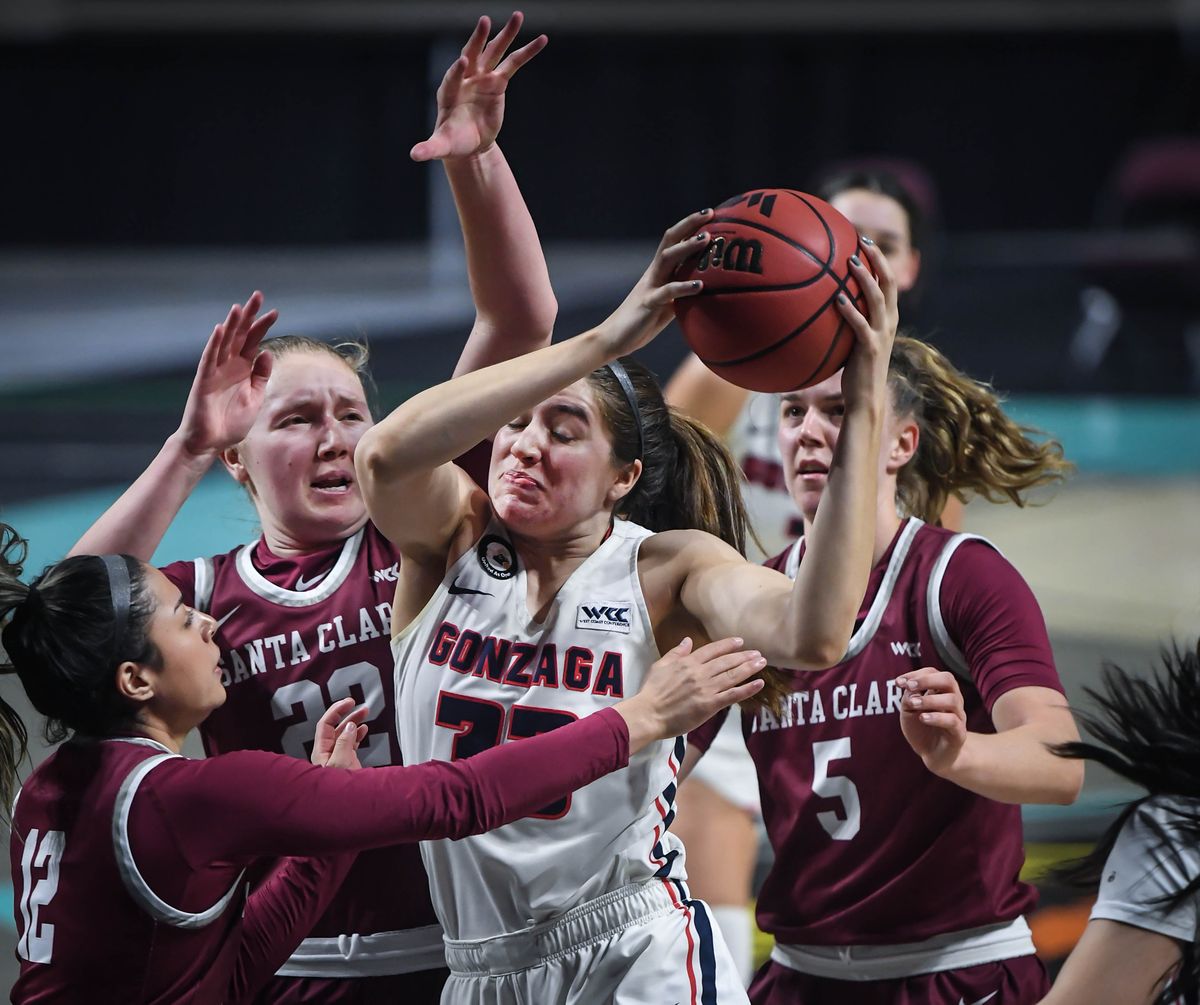