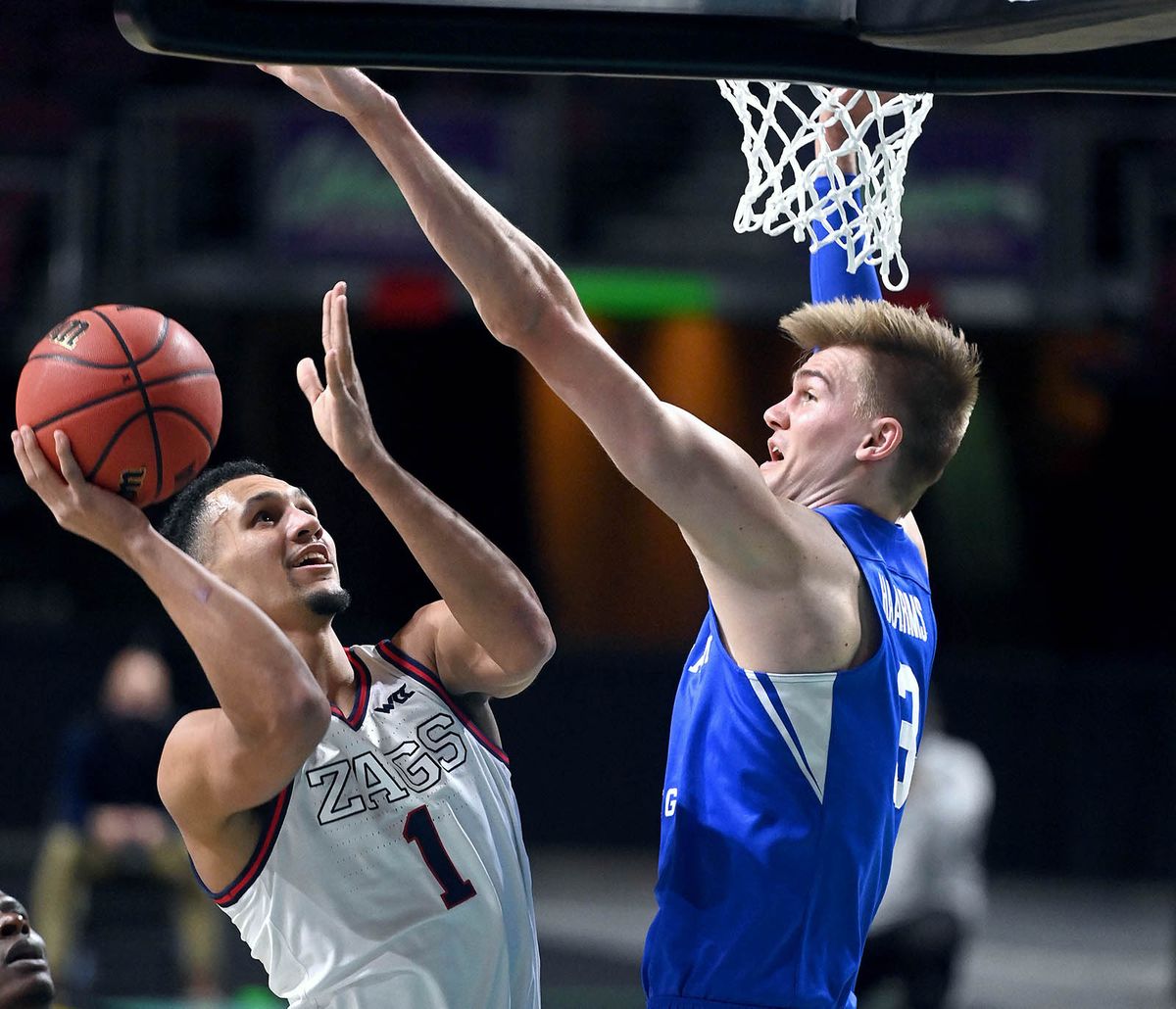 LAS VEGAS — BYU took a 12-point lead into the halftime break and mounted the biggest threat to Gonzaga’s perfect season, but Jalen Suggs, Corey Kispert and the Bulldogs regrouped in the second half and overcame the Cougars 88-78 to win the West Coast Conference Tournament championship at Orleans Arena.

Suggs, the tournament MVP, finished with a game-high 23 points and made consecutive 3-pointers late in the second half to seal an 18th WCC Tournament championship for the Bulldogs, who’ve claimed nine of the last 11 titles in Las Vegas. Suggs also had five rebounds and five assists.

Ice in his veins!@JalenSuggs2020 gives @ZagMBB a 6-point edge with under 2 mins to play.

Kispert, who started 1 of 6 from the field and scored just three points in the first half, came out of his slump in a big way and made a trio of 3-pointers early in the second half to cut BYU’s lead to three points. The WCC Player of the Year finished with 17 points and five rebounds and was 4 of 10 from beyond the arc.

Joel Ayayi finished with 18 points and nine rebounds, Drew Timme had 14 points and seven rebounds and Andrew Nembhard was the fifth Zag in double figures, with 13 points.

The top-ranked Bulldogs (26-0), who won their 30th consecutive game dating back to last season to extend the country’s longest win streak, are widely expected to enter the NCAA Tournament as the top overall seed and will learn their first-round pairing in Indianapolis this Sunday. Gonzaga is aiming to become the first team since Indiana in 1975-76 to cap an undefeated season with a national championship.

A perfect season hung in the balance for the entirety of the first half and part of the second, as a BYU team coming off a thrilling double-overtime win over Pepperdine the night before got off to a torrid start shooting the ball and led 53-41 at halftime. The Cougars shot 21 of 31 (67%) from the field in the first half and opened 9 of 13 (69%) from the three-point line.

BYU’s hot shooting didn’t last and the Cougars missed their first nine 3-point attempts in the second half, allowing Kispert and GU to tie the game at 57-57.

But the Cougars withstood Kispert’s 3-point flurry and re-extended the lead to nine points on a three-point play from All-WCC First Team selection Alex Barcello.

Unfazed, the Bulldogs went on a 10-0 run to take their first lead since the first half, going up 69-68 on Ayayi’s fast-break layup. BYU tied it at 71-71 and 73-73, but Suggs made consecutive 3-pointers inside the final 2:30 to open up a nine-point Gonzaga lead and the Cougars never recovered.

Mark Pope’s team shot 2 of 15 from the three-point line in the second half, while Mark Few’s was 6 of 13. The Bulldogs went just 18 of 27 from the free throw line, but shot 20 more free throws than their opponent.

All of it – Gonzaga’s spotless record, the top overall seed in the NCAA Tournament and the WCC Tournament championship – was on the line in the closing minutes. | Read more »

John Blanchette: BYU shows the rest of college hoops *most* of the blueprint on how to topple Gonzaga

Well, there’s your blueprint on how to beat Gonzaga. | Read more »

TV Take: BYU poses plenty of questions in upset-bid of Gonzaga, but the Zags had the answers

It was the first and almost surely the last WCC Tournament for Jalen Suggs, so Gonzaga’s freshman phenom made sure to finish it with a flourish.  | Read more »

15:49 – BYU 7, Gonzaga 5: Gideon George has three points and the Cougars lead the Bulldogs at the first media timeout.

Andrew Nembhard has three points for Gonzaga on a catch-and-shoot 3-pointer. Jalen Suggs has two points.

Suggs has been active early. The freshman point guard is 1-of-4 shooting with one assist.

Trevin Knell has seven points to lead BYU, which has made six of its last seven shot attempts. Gideon George, Brandon Averette and Matt Haarms each have five points.

Midway through the first half, @BYUbasketball leads #1 Gonzaga by 7 🧐

Gonzaga is led by Joel Ayayi’s six points. Jalen Suggs and Andrew Nembhard each have five.

Jalen Suggs from behind the arc! Close one inside the Orleans Arena.

GU senior Corey Kispert is 0-of-4 shooting and center Drew Timme has not attempted a shot.

Wow, what a pass from Timme. Takes a look over his shoulder and dishes a behind the back pass to Watson. pic.twitter.com/hJD31nfb6T

Trevin Knell, Brandon Averette and Matt Haarms each have seven points for BYU. The Cougars are 6 of 9 from 3-point range.

Matt Haarms flops big time against Timme who throws it down for good measure. Haarms was given a warning for his flop here pic.twitter.com/EwznJygI8A

Corey Kispert still has yet to score for GU. The Zags are led by Joel Ayayi’s eight points.

3:54 – BYU 45, Gonzaga 37: The Bulldogs have made six of their last seven shot attempts but the Cougars still lead by 8.

Gonzaga’s leading scorer Corey Kispert finally got on the scoreboard with a 3-pointer before the under-4 timeout. He is 1-of-5 shooting.

BYU 53, Gonzaga 41: Trevin Knell has 15 points and the red-hot Cougars lead the Bulldogs by a dozen at the break in Las Vegas.

Joel Ayayi and Jalen Suggs each have 11 points to lead Gonzaga.

The Zags are shooting 46.7% and have made six 3-pointers.

Brandon Averette and Matt Haarms each have added nine points for BYU.

Leading 20-19, the Cougars went on an 11-0 run behind five points from Haarms and 3 from Averette.

Gonzaga was able to cut the deficit to 8, but eight points from Knell in the final 5:10 of the half helped BYU take a double-digit edge into halftime.

BYU’s 53-39 lead with under a minute left is the largest deficit the Zags have faced this season.

Kispert has a team-high 12 points.

BYU is just 1-of-5 shooting to start the half.

Zag fans will hope that this gets Kispert going. Suggs falling out of bounds and finds Kispert in the corner pic.twitter.com/0AjpZlWBk5

BYU up 61-57 after George 2 FTs and Knell driving layup. Zags scoreless last 2:32 after fast start to second half

What a clean pass fake from Nembhard here. Fakes the pass inside, Haarms jumps, and Nembhard has a clean look at the hoop pic.twitter.com/A3MtJAG9Bj

Zags with seven straight points, Kispert at line for 1 FT, GU down 68-66

What an absolutely beast of a take by Kispert. Takes it right to BYU’s Barcello before he gets set for the and-1. pic.twitter.com/Od14Mvkz5E

Gonzaga took its first lead since six minutes into the game when Joel Ayayi scored on a fast-break layup with seven minutes left to put the Zags up 69-68.

Jalen Suggs: QB1.
Finds Ayayi deep down the court and drops the ball in the bucket for the easy layup.
Zags are marching. pic.twitter.com/HnaO5xtanu

Suggs showing off his 1v1 defense.
Bodies up the driver and skies for the block. pic.twitter.com/NSPInmWJog

Every NBA team has a seat at Orleans Arena tonight. Imagine a handful of the ones who show up are here for this guy. pic.twitter.com/ubvlzb2JNS

The first two meetings weren’t exactly instant classics, but BYU coach Mark Pope believes his team can change that in round three against No. 1 Gonzaga. The Zags and second-seeded Cougars tangle Tuesday at 6 p.m. for the WCC Tournament title at Orleans Arena in Las Vegas. | Read more »

Matt Haarms added 18 points and seven rebounds for the Cougars, which trailed most of the game. | Read more »